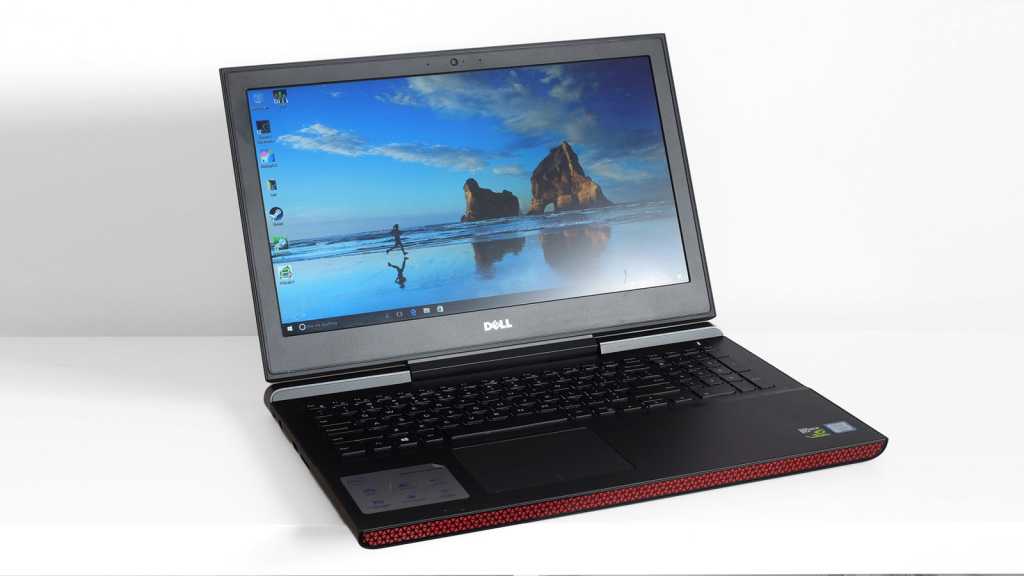 The Dell Inspiron 15 Gaming gets just about everything right apart from its screen tech. Its design is fine, its performance admirable and its battery life a jaw-dropper. This makes its lacking screen quality all the more annoying, although at least Dell lets you upgrade this if you can afford £1299 rather than £899. It’s something to consider carefully if £899 is your upper limit, though, as the poor colour and contrast really does not do games justice.

The Dell Inspiron 15 Gaming is a mid-price gaming laptop. It doesn’t offer the most powerful graphics processors around, but does have enough grunt to work as your main PC and play almost any game at 1080p with the visuals set to ‘medium’ or ‘high’.

It covers all bases, with remarkably good battery life a highlight that alternatives just don’t get close to. There’s one potentially fatal flaw: most versions of the Dell Inspiron 15 Gaming have a poor quality screen.

It’s available for the same price from Amazon here.

Right at the top of the range is the £1299 spec. It has a 512GB SSD and a radically more advanced screen. Not only is it a 4K panel, it uses better IPS tech too.

As standard these laptops come with a one-year collect and return warranty. You can upgrade to a better ‘onsite’ warranty for £68 if you buy from Dell direct, and extend that cover to up to four years. This full-fat cover costs up to £232.

Gaming laptops from Asus, MSI and Acer often have colourful keyboard backlights and great big light-up designs on their lids. They don’t want to hide their gamer chops.

The Dell Inspiron 15 Gaming is more subdued. The Dell logo on the back is red, and the heat outlets on the front and back edges are red too, but as you use the machine it looks exactly like a ‘normal’ laptop.

You don’t need to feel embarrassed should you take it out in a library or a Starbucks, but it has a few more design flourishes than a dull office-bound machine.

The Dell Inspiron 15 Gaming’s entire shell is plastic, but it uses a few different finishes. Its hinge is simple grey plastic, but the lid and inside are soft-touch black plastic. The lid picks up fingerprints readily, but looks and feels nicer than that of a basic ‘meat and potatoes’ model.

We wouldn’t advise buying the Dell Inspiron 15 Gaming if you want a laptop to carry around with you every day, though. It weighs 2.65kg and at 25mm thick will take up a lot of space in even a large bag. We wouldn’t want to take this on holiday or out for work trips too often.

Dell seems to have made this for people who want an alternative to a desktop, and you see this in the connections too. There’s an Ethernet port, for direct connection to a router, as well as three USB 3.0 ports and a full-size SD slot.

Interestingly, Dell has not included one of the newer USB-C 3.1 sockets, which is a slight surprise. Most new laptops seem to have one. Right now we don’t miss it, but in two years you might be left wishing you had a USB-C.

The Dell Inspiron 15 Gaming has a classic ‘larger laptop’ keyboard layout. There’s a NUM pad as well as a normal set of keys, and important keys towards the edge like Shift have not been shrunk down.

Just recently we reviewed the Dell XPS 13, and while it has a slightly better, meatier-feeling keyboard, we’d be more than happy to live with this one. It’s crisp, comfortable and has the same sort of light definition you see in an ultrabook keyboard.

It also has a backlight. Tap on the F10 function key and it switches between medium and high intensity. There’s no very low keyboard backlight level, but if that’s all you need maybe you don’t need a backlight at all.

The trackpad below is large for a gaming model, and has nice click action. However, it’s not perfect. It’s made of plastic rather than glass, so is a little less smooth, and there’s some unwanted ‘pre-click’ give to the pad. It depresses a little under the weight of your finger, which is a shame.

The screen is easily the weakest part of the Dell Inspiron 15 Gaming. Its size and resolution are fine: 15.6 inches is a great size for gamers and 1080p is the best resolution unless you’re going to pair it with a true top-end GPU.

However, the Dell Inspiron 15 Gaming uses a TN, twisted nematic, panel rather than the IPS kind used in the vast majority of higher-end laptops. These TN screens have much poorer viewing angles, suffering from contrast shift when tilted the wrong way, and shifts in the character of the image from even a slight angle.

Gamers will understand why Dell has done this: TN offers much faster response times than IPS, which is what you want for competitive gaming.

But there are good and bad TN panels. On the Inspirion, colour and contrast are both poor, and the colour tone changed pretty dramatically after a session with our calibrating colorimeter. The Dell Inspiron 15 Gaming seems to have quite a blue-green tint out of the box. Calibrated or not, it can only cover 54.6 percent of the sRGB colour standard. This is pretty standard for a TN display, but it’s not what we expect from a £1199 laptop. Colours look washed out as a result.

Contrast of just 281:1 means blacks are not particularly deep, another reason for the washed-out, faded appearance. Next to the Dell XPS 15, it looks bad.

From a purely practical perspective it fares better, though. An anti-glare surface minimises the effect of reflections and maximum brightness of 300cd/m is enough for outdoors use.

We’d be much more comfortable if the Dell Inspiron 15 Gaming had an IPS screen, though. It’s an ugly face for what is otherwise a great laptop.

Of course, Dell gives you another option. The £1299 version of the Dell Inspiron 15 Gaming has a much better 4K IPS LCD screen. We’ve not tested it, but would be surprised if it isn’t radically better, having seen 4K IPS panels on other Dell laptops recently.

The Dell Inspiron 15 Gaming’s performance suffers from no similar issues. All of the available specs have quad-core Intel Core processors, and the one we’re testing a very high-end Intel Core i7-7700HQ.

This is a “do anything” kind of processor, capable of handling video editing, music production and intense photo editing, as long as you have enough RAM to match. Our 16GB model will sail through more complex tasks like that.

Our version has a basic 1TB 5400rpm hard drive and a faster 256GB SSD, onto which the OS is installed. It’s fast and responsive, although oddly enough we saw a greater performance difference than expected compared to Dell’s XPS 15, which uses the same CPU.

This seems a bit odd when it’s meant to be a CPU test, but the Inspiron does also have a much slower SSD. Its read speeds are around 550MB/s rather than 3000MB/s-plus, write speeds 265MB/s rather than 1700MB/s.

Buy one of the two more expensive versions of the Dell Inspiron 15 Gaming and it’ll best the XPS 15 for gaming, though. Our review model and the top-end 4K one both have Nvidia GeForce GTX 1050 Ti cards rather than the standard GTX 1050. This is a faster version of Nvidia’s lower-mid range card, and is capable of running most games very well at 1080p.

And so on the 1050 Ti version we were sent for review, Thief runs at an average of 51.4fps at max settings, 1080p resolution, which is around 9fps more than the Dell XPS 15 manages. At 720p, min settings the frame rate rockets to 70fps.

Alien: Isolation runs at 179fps at 720, low settings, and 60fps at 1080p, high settings. For now at least you can play just about anything you like, including processor-intensive titles. Nvidia’s latest cards are very capable.

Typical of a gaming laptop, the Dell Inspiron 15 Gaming gets reasonably noisy under load, but the fans are not whiny or high-pitched and the well-designed air flow stop the parts you touch from getting too hot. Check out the exhaust at the back and you can actually see the laptop’s heatsinks.

Laptops this powerful do not tend to last very long off a charge, even when using a battery saver mode. 4.5 hours of light use is to be expected, but the Dell Inspiron 15 Gaming’s stamina is miles ahead of this slightly depressing standard.

Thanks to Dell’s clever power management lasts staggeringly long for a quad-core Intel CPU machine. Playing a 720p video on loop with the screen brightness at 120cd/m, it lasts eight hours fifty minutes. How often do you see a performance laptop like this that offers all-day use? It’s a rarity.

The Dell Inspiron 15 Gaming also has reasonable speakers, with better-than-average bass thanks to a ‘subwoofer’ driver. Unlike some gaming machines, clarity isn’t thrown away as a result, and the tone is natural-sounding enough. We’d still choose to plug in some headphones or speakers at the earliest opportunity for gaming or movie-watching, though.