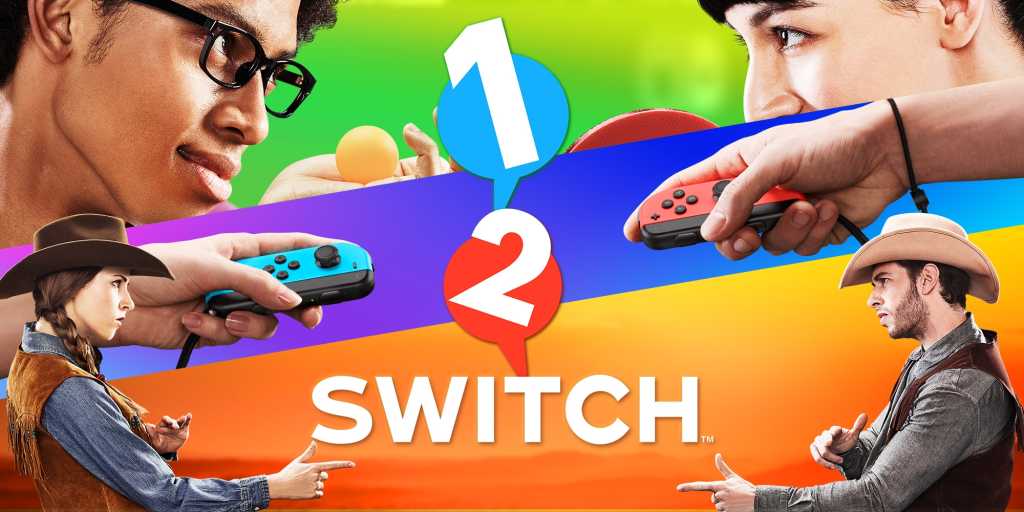 If there’s one word to sum up 1-2-Switch, it’s ‘inessential’. While Wii Sports and Nintendo Land felt like killer apps, and proof of concept for the consoles they helped launch, 1-2-Switch feels forgettable, shallow, and uninspired. It’s fun for a night or two, but after that you’ll probably want to 1-2-Switch it off.

Looking at coverage of the Nintendo Switch launch, it’d be easy to think that The Legend of Zelda: Breath of the Wild was the only game out for the new console. While the rest of the launch lineup is a bit slight, there is one other big release: Nintendo’s own mini-game collection 1-2-Switch.

Echoing the likes of Wii Sports and Nintendo Land before it, 1-2-Switch is a collection of games designed to show off the unique capabilities of the Switch and its Joy-Con controllers – though unlike those games, it doesn’t come bundled in with the device itself. So is this the Switch at its best, or a muddled mess? Find out in our 1-2-Switch review.

How much does 1-2-Switch cost?

As mentioned above, 1-2-Switch doesn’t come included with the Switch console, though we wouldn’t be surprised to see Nintendo release a bundled edition some time in the future.

Fortunately, it isn’t a full-price game, and runs slightly cheaper than big titles like The Legend of Zelda. At launch, the best price we’ve found in the UK is £34 from Amazon, while Game and Zavvi are selling it for the RRP of £39.99.

Oh, and don’t worry, while 1-2-Switch is multiplayer, it’s designed to work using only the two Joy-Con controllers bundled with the console, so there’s no need to pick up any extra controllers or accessories to get the most out of the game. 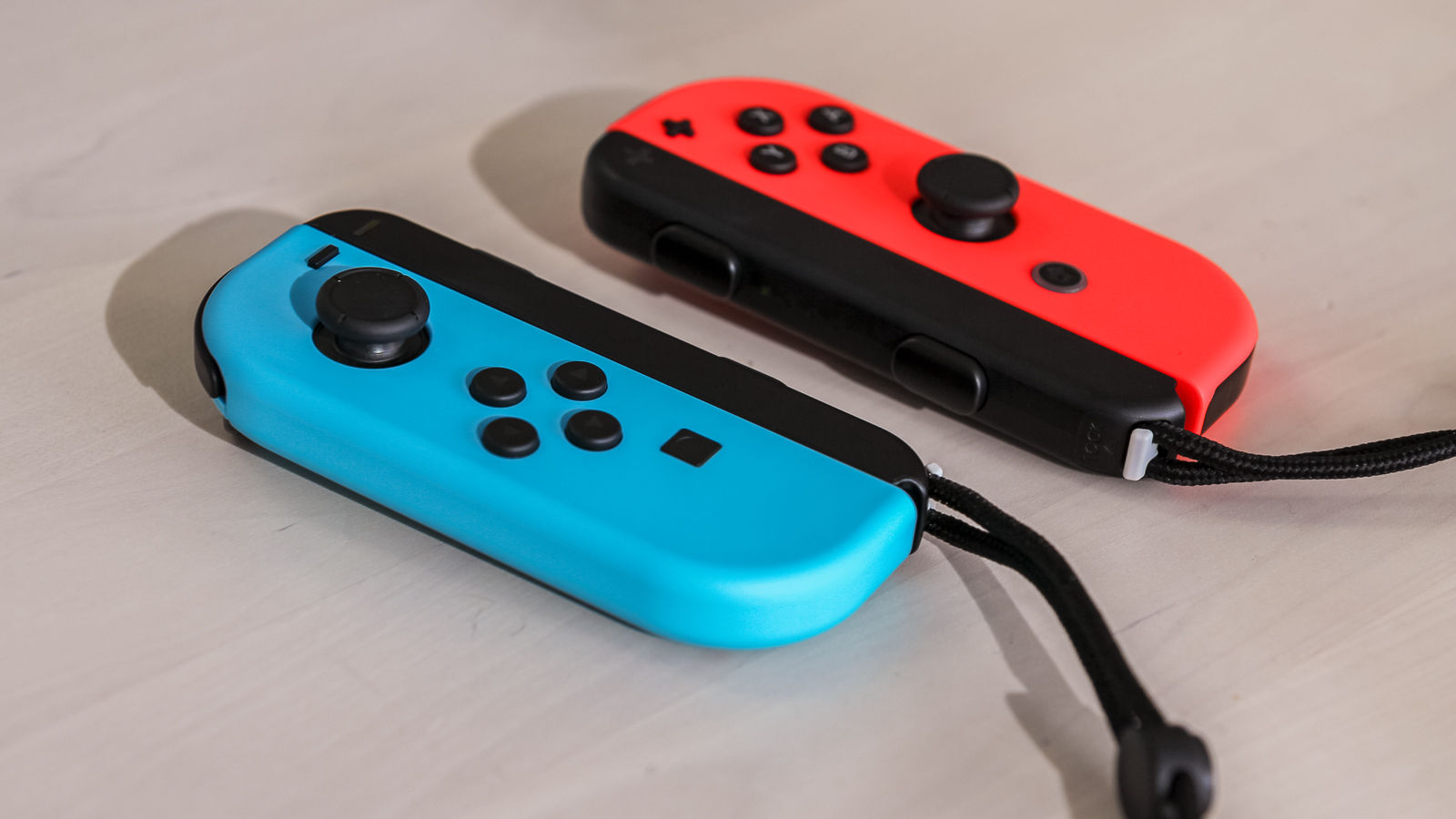 So, what do you get for your money? 1-2-Switch is a mini-game collection with a fairly unique gimmick: almost every game is designed to be played while looking each other in the eye, rather than looking at the TV screen. Players then rely on audio and rumble feedback from the Joy-Con controllers, rather than visual cues from the TV.

For example, in Sword Fight you face off against one another, swinging the Joy-Con remotes through the air as you act out a fight. Similarly, in Quick Draw you have to look one another in the eye as you wait for the cue to fire your sharpshooters, while in Milk you’ve somehow got to maintain eye contact (and your composure) as you each pretend to milk a virtual cow. 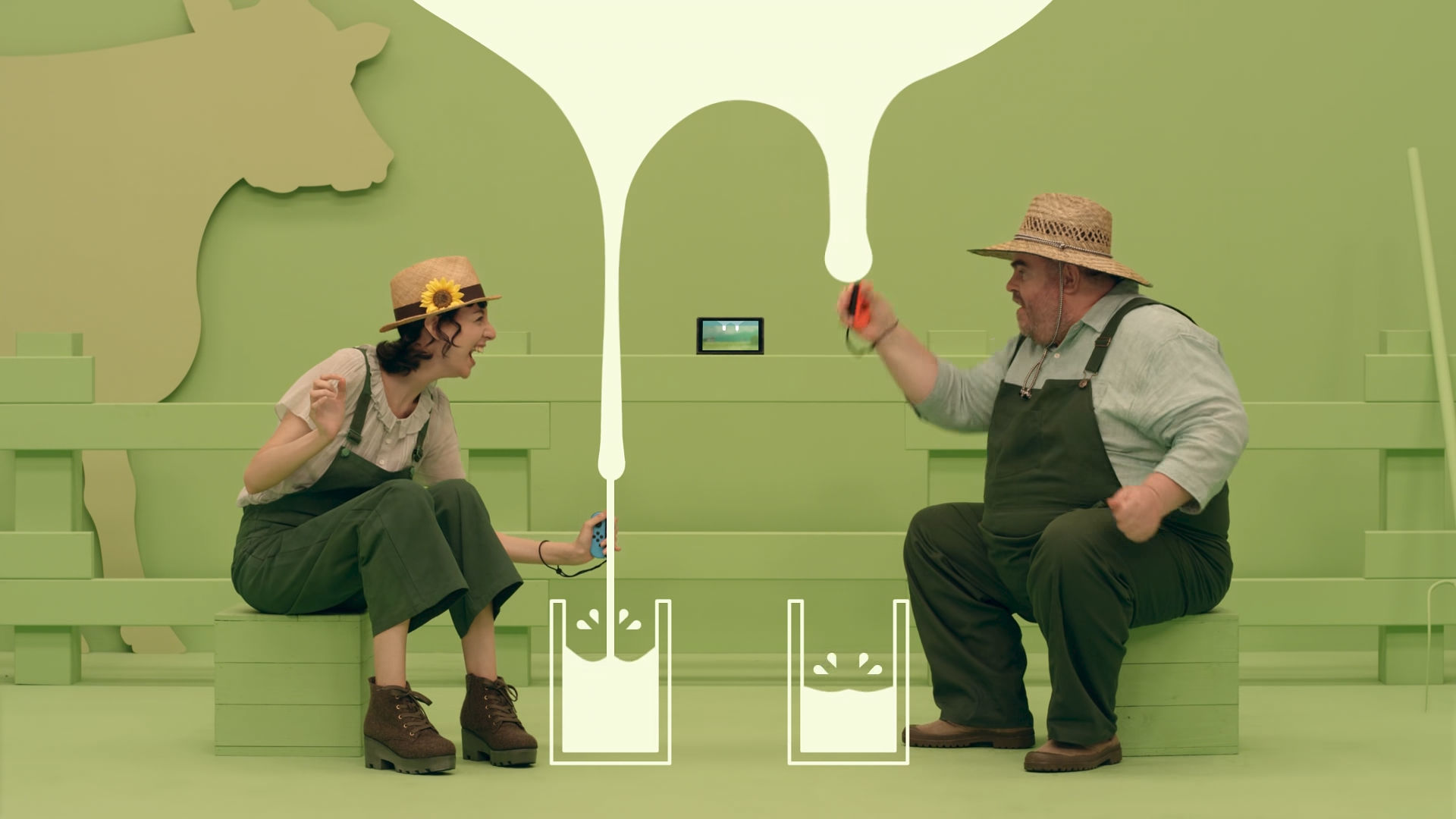 As a hook for a party game, it’s a great idea. Simple games are elevated by the introduction of eye contact, and victory depends as much on playing each other as on playing the game. One of the better games in the collection, Samurai Training, sees one player ready a sword strike that the other has to try and block by raising their Joy-Con. In any other setup, this might just be a test of reaction speeds, but here it’s as much a mental game as anything else, each player trying to read the other’s body language, fake each other out, and generally get inside each other’s heads.

The games are mostly designed to show off the varied tech inside the Joy-Con controllers, some more successfully than others. The unfortunately named Ball Counting is a great demonstration of the new HD Rumble, giving the impression of a handful of ball bearings rattling around the controller, and asking you each to count them. It’s a great illustration of the power of the advanced haptic feedback, and something no other games console can manage right now. 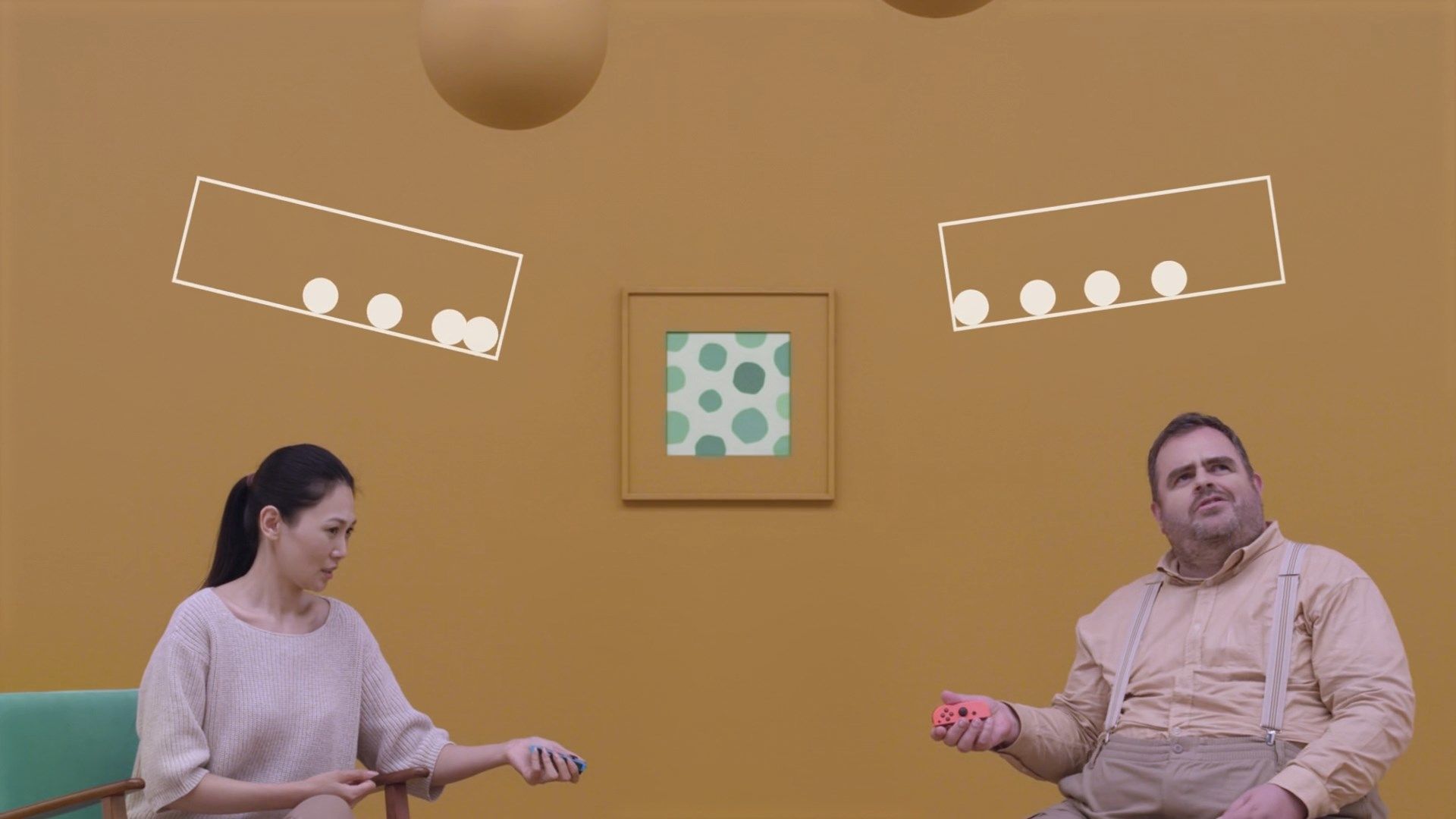 Unfortunately, too many of the games simply rely on the motion controls and gyroscope, and it’s hard not to feel that a good number of them could have been played with the Wii Remote Plus, which isn’t exactly a convincing demonstration of the new hardware. It’s especially frustrating when 1-2-Switch offers inferior versions of Nintendo’s own old games. Baseball was never the highlight of Wii Sports, but in 1-2-Switch it’s a total mess, a lack of helpful audio feedback leaving a confusing scramble of timing that’s fun for neither players nor spectators.

Baseball isn’t the only game that’s confusing, awkward, or plain not fun. We once missed an entire game of Sword Fight because we didn’t realise we were meant to have started fighting yet; while Shaver (in which players mime shaving their faces) left us entirely unsure when we were calibrating the controllers and when we were actually playing. Worst of all is Baby, in which you have to rock the Switch tablet like a crying child, and try and settle it to sleep. It’s about as fun as, well, trying to get a screaming baby to settle, which is to say: not very.

Read next: The Legend of Zelda: Breath of the Wild review

1-2-Switch is at its best when it embraces the real spirit of party games: forcing people to make fools of themselves. There’s Gorilla, in which players have to pound their chests rhythmically to attract a female of the species; or Runway, which challenges players to walk the catwalk (with maximum hip-sway) before striking pose or two at the end.

Best of all are 1-2-Switch’s most innuendo-ridden games. There’s the aforementioned Milk, but also Eating Content, which uses the right Joy-Con’s IR motion camera to detect how quickly the player opens and closes their mouth, with the controller held all too suggestively all the while. Most astonishing of all is Soda, in which players pass one controller around the room, each giving it a vigorous shake, hoping the ‘soda’ will ‘pop’ in another player’s hands. And when it does? A geyser of white fluid erupts on the TV screen for all to see. It’s subtle stuff. 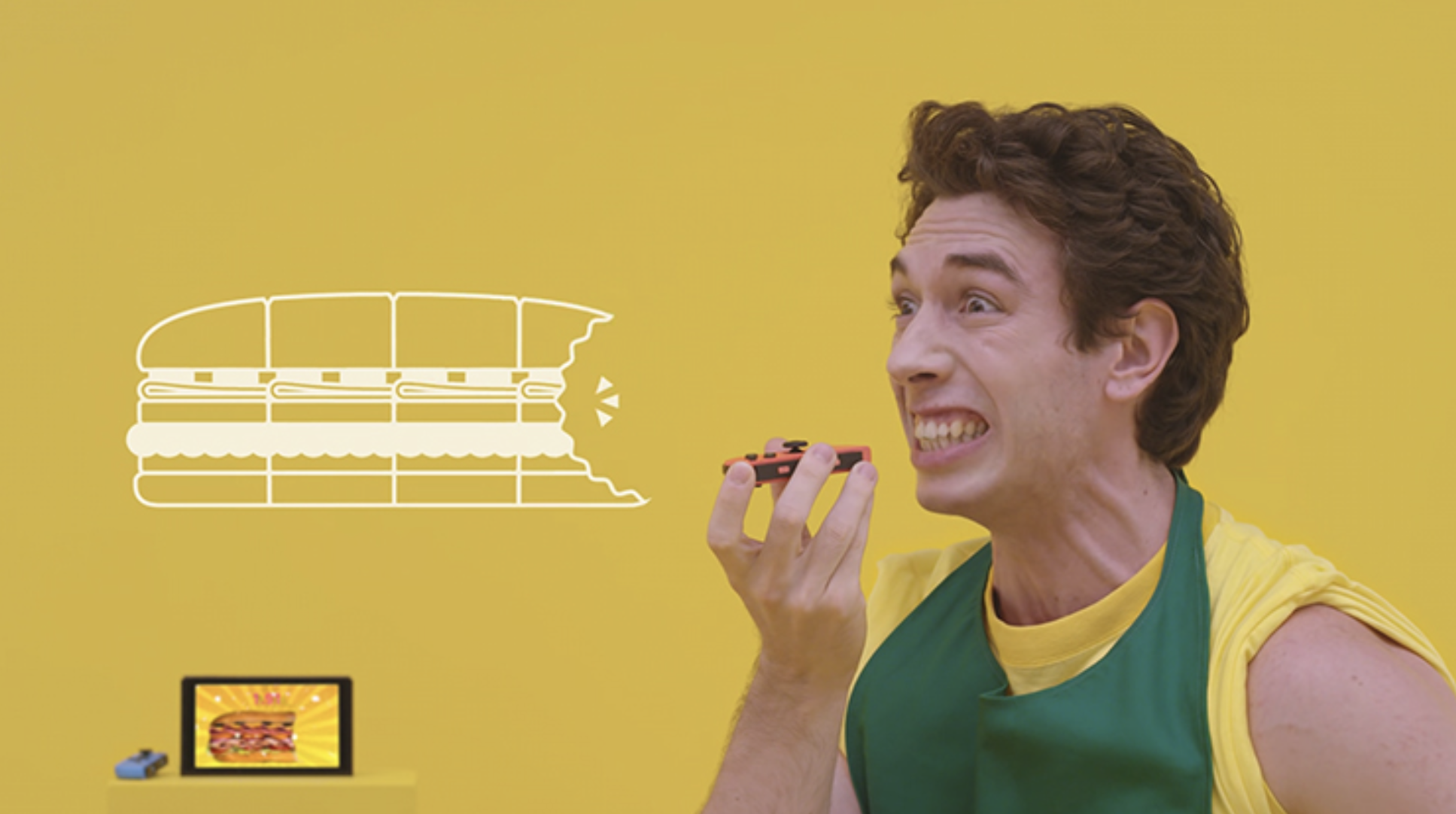 Perhaps the strangest complaint of all is the awkward experience of starting the game. While there are 28 mini-games in total, when you first launch 1-2-Switch it locks you into playing Quick Draw, and nothing else. After a couple of goes it gives you access to eight or so games, and after you’ve played a dozen or so games across all of those, it finally gives you access to the rest, including the more interesting competitive mode that pits two teams against each other across a variety of games.

Gating content behind unlocks is nothing new of course, but what’s odd about 1-2-Switch is that it gives you no cue that there’s more content to unlock, or any indication of how you can do it. You simply have to keep playing, on faith, until it deigns to give you the full experience – which is exactly what you don’t want to have to do for a party game, when you want to get into the fun bit pretty much immediately.