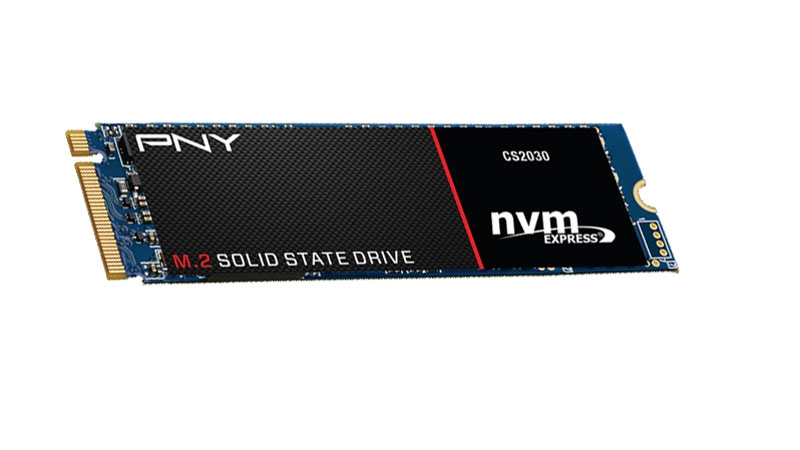 The PNY CS2030 is a fast SSD, and noticeably quicker than a SATA SSD, but considering that the faster Samsung 960 Evo is cheaper and offers 10GB of extra capacity (20GB if you go for the 500GB model) it’s impossible to recommend the CS2030.

French firm PNY is perhaps better known for its graphics cards and USB flash drives than SSDs. The CS2030 is the fim’s latest SSD and it attaches not via SATA, but an M.2 slot. This direct PCIe connection means blistering performance compared to traditional SATA SSDs.

PNY products are not the easiest to track down in the UK, and even though the CS2030 launched at the tail end of 2016, it’s still not widely available from British retailers.

And you get an extra 10GB of capacity, too.

The drive is covered by a three-year warranty, the same as the 960 Evo. But PNY doesn’t quote the maximum number of Terabytes written (TBW), just a two-million-hour MTBF. Samsung guarantees 200TBW.

There’s little to say about an M.2 SSD from a design perspective since the form factor – like 2.5in SSDs – is the same for all drives. PNY has wrapped the PCB with a label, but unless your PC has a side window and the M.2 slot puts the SSD prominently on display, looks aren’t really that important.

It’s possible to install the CS2030 in a compatible laptop, but if your PC motherboard doesn’t have an M.2 slot, you can buy a PCIe expansion card for under £30.

If we hadn’t already tested the 960 Evo, we’d have been blown away by the CS2030’s performance. Even today’s ‘value’ SSDs approach the limit of SATA 6Gb/s, but attaching an SSD to a four-lane PCIe bus means that limit doesn’t apply.

And reading data 2770MB/s is seriously impressive, as is writing it at 1332MB/s. Similarly, with a queue depth of 32, reading random 4KB data at 656.6MB/s and writing it at 418.7MB/s is in a completely different league to any SATA SSD.

But the cheaper 960 Evo outperforms it in all those areas, sometimes by a significant margin.

The only time the CS2030 pulls ahead is in random 4KB writes with no queue depth where – in Crystal Disk Mark – it managed 92.3MB/s and the 960 Evo faltered and delivered just over 50MB/s. Yet, some budget SATA SSDs fare better in this test, with the Crucial BX200 managing 106.7MB/s.

Ultimately, when the majority of everyday file transfers in Windows are 4KB, those blistering sequential speeds are slightly less relevant. Undoubtedly, you will notice the benefit of an M.2 SSD over a SATA model, but at twice the price, it’s hard to justify, especially if you need more space than a 240GB drive offers.