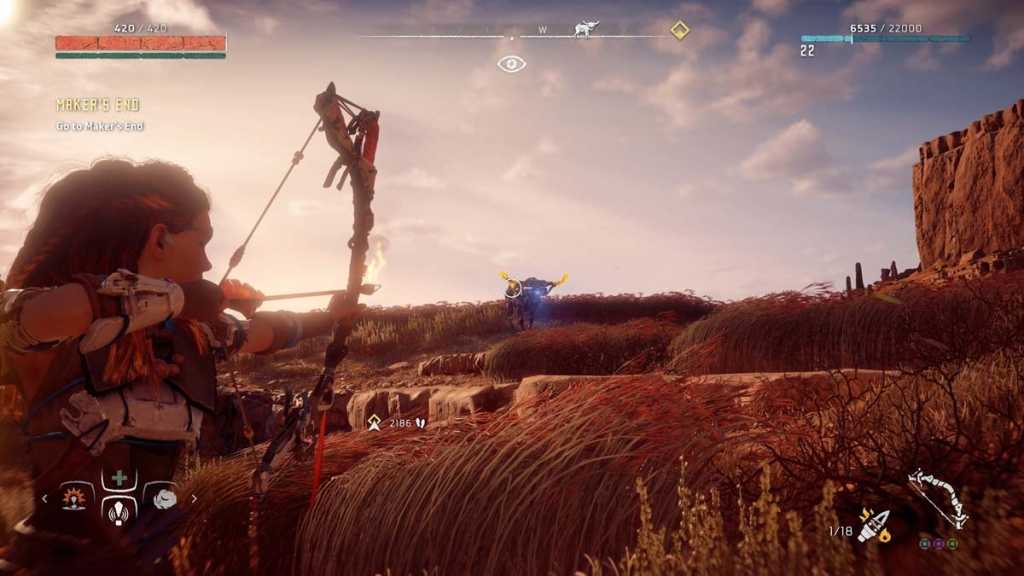 Horizon Zero Dawn is hands-down the best open world game available for the PS4, offering textures of an extremely high quality while maintaining a stable frame rate and providing one of the most impressive gaming experiences available on a console. The storyline is intriguing and will leave you wanting more, and coupled with phenomenal voice acting, provides something of an incredibly high standard. The combat mechanics are smooth and intuitive, allowing players to be creative when tackling the variety of Machines roaming the open world. Essentially, it’s a game that you’ll keep going back to, over and over again, if not for the intriguing story then for the gorgeous, varied open world.

Horizon Zero Dawn is one of the most highly anticipated games of 2017, exclusive to the PS4 and PS4 Pro. But what makes the post-apocalyptic world of Horizon Zero Dawn so attractive? Apart from roaming mechanical dinosaurs and a fiery red-headed heroine, of course. We’ve spent some time exploring Horizon Zero Dawn’s vast open world, and here’s what we thought. Read next: Best upcoming games of 2017

Before we get into the review, let’s first discuss the UK price, release date and platforms. Horizon Zero Dawn now available to buy in the UK after what feels like years of waiting, and is available to order from the likes of Amazon (£44) and GAME (£45), as well as Sony’s PlayStation Store (£49).

Here comes the bad news for Xbox One and PC users: the game is a PlayStation 4 exclusive, and not a timed exclusive either. That’s right, if you’ve got a PC or Xbox One and were looking forward to playing Horizon Zero Dawn, you’re out of luck.

Set on Earth years after an unexplained apocalypse wiped out life as we know it, the story of Horizon Zero Dawn starts with our young protagonist Aloy learning about how to survive in a world filled with robot dinosaurs, known simply as Machines.

You see, everything we recognise – from roads, to buildings and factories – are unrecognisable to those that now inhabit the Earth, and look at us in a similar way that we look at the Ancient Egyptians; with mystery and wonder. Nobody is quite sure what happened to them, and all that is left now are ruins of what once was – before it was reclaimed by mother nature.

As a young Aloy, you learn about the nature of the vast open world around you, from taking down dinosaurs stealthily to learning about crafting potions and other vital items. It’s essentially a tutorial for the rest of the game, but it doesn’t feel as out of place as it does in games like Final Fantasy 15 – it feels like a natural part of the story, rather than something that must be done before the game can truly begin.

Once an adult and after years of training in the wilderness, Aloy becomes the skilled, powerful character that we’ve grown to know in Horizon Zero Dawn’s popular marketing campaign, ready to take on the open world and all the challenges within it. After proving herself worthy to those that labelled her an outcast as a child, it’s up to Aloy to unmask the secrets of her past and in doing so, shed some light on why the world it is as it is, and where the mysterious dinosaur-like Machines are coming from.

The game’s storyline is much like a Hollywood movie with an engaging and intriguing storyline along with phenomenal voice acting across the board. Combine that with extended cut scenes and a game where every frame could be a painting and you’ve got something that’s engaging, gorgeous and hands down one of the best games to grace the PS4 ever.

It’s not just the main storyline that’s compelling either, as the inhabitants that you meet along the way will provide you with side quests to complete while on your travels. While in some open world games side quests are seen as secondary and can quickly become repetitive, we’d put Horizon Zero Dawn in line with the likes of The Witcher 3, a game that provided meaningful side quests that keeps you hooked and willing to help.

The people that Aloy encounters on her travels are varied, and tasks can include anything from slaying a flock of Glinthawks terrorising a settlement to tracking down a missing person, and everything in between. It’s only through side quests that you gain access to cauldrons, the self-operating robot foundries that shed some light onto the origins of the Machines themselves. The way that it’s designed makes you want to seek out those with a side quest or errand, rather than being something that you must do to complete the game.

Visually, Horizon Zero Dawn is easily the most beautiful game ever crafted for the PS4, and we don’t think we’ll see something come close for some time. Yes, it even beats the likes of Tomb Raider and Uncharted, two game series that rely heavily on high-end visuals to compliment the Hollywood-esque storyline. It seems as if the developers themselves are confident of their achievement, offering a Photo mode within the game for users to get creative with their snaps.

It helps the game become more immersive and more alive. Wandering through fields of long grass is much more picturesque when you can see individual blades of grass swaying in the breeze, or seeing individual hairs on Aloy’s head swept up by howling winds in the midst of a storm on a mountain top. Even if it’s only a glimpse of an eerie blue light emitted from the eyes of Machines spotted while wandering alone at night, it helps the world come to life.

While the graphics are phenomenal, it’s only when coupled with the atmospheric sound and dynamic soundtrack that changes depending on what’s happening that the game really comes into its own. You can hear footsteps on stone as you walk along rocky paths, and hear the hums and whirs of the internals of Machines as you crouch nearby in waiting. It all adds up to provide an immersive, dynamic audio experience that matches the standards set by the visuals of the game.

Frankly, what’s most impressive about Horizon Zero Dawn is that it’s powered by a PS4, and not a high-end gaming PC. This is especially true when running Horizon Zero Dawn on a PS4 Pro, as we did, offering a 4K output at 30fps by rendering the game in 2160p checkerboard. Lines are clear and defined, textures are of an extremely high quality and the frame rate is stable while providing one of the greatest gaming experiences available on a console. We take our hats off to you, Guerrilla Games, we really do.

It’s not only a strong storyline and impressive visuals that make Horizon Zero Dawn the impressive game that it is, oh no. For a game to really be successful, it needs to offer polished core mechanics that make gameplay as smooth and enjoyable as possible. And yes, you’ve guessed it: Horizon Zero Dawn’s mechanics, especially battle mechanics, perfectly compliment the style of play presented by the developers.

Aloy’s weapon of choice, the bow and arrow, seems to be the go-to weapon for recent games including the likes of Tomb Raider, although we must admit that none offer a more satisfying bow and arrow experience than Horizon Zero Dawn.

What it boils down to is the freedom of movement available to Aloy: with no stamina system at play, gamers are free to dodge, roll and sprint and hide for as long as required to avoid the metallic jaws of the Machines that roam the open world. Combine this with a growing arsenal and a quick menu system that allows not only for the selection of weapons but also the crafting of ammo, and you’re left with a game where every battle is tactical.

Speaking of, tactics are key to Machine battles – and we love it. Rather than equipping Aloy with an overpowered melee weapon that can defeat anything with a single hit, there’s a range of Machines available all with varying strengths and weaknesses, and a range of approaches to take them down. It forces the player to observe and plan, rather than running in blind, and rewards them with spectacular battle scenes.

The idea is to chip away at the dinosaurs to reveal the weak components beneath, allowing you to deal huge damage to even the toughest Machine. The ability to pin down a Machine using a Tripcaster, destroy an armoured plate with an elemental bomb using the Slingshot and destroy the parts beneath using a Hunter’s arrow all without having to pause combat is a glorious and satisfying experience, leaving us wanting more time and time again. Sure, it can be a challenge at times, but it makes fighting Machines – especially the bigger and more powerful ones – an exhilarating experience where no two battles are the same.

There’s also a point-based upgrade system with three areas of focus – combat, stealth and foraging – with users able to access new and upgraded abilities depending on their play style. It allows for Aloy to adopt the style of play best suited to not only the game but the player too, offering a hardened combat experience for those that want it, or a more effective tactical approach for those that like to observe and plan.

Of course, it also adds a sense of progression to the game, watching Aloy go from a stumbling outcast child to a hardened warrior capable of taking down the biggest Machines with finesse.