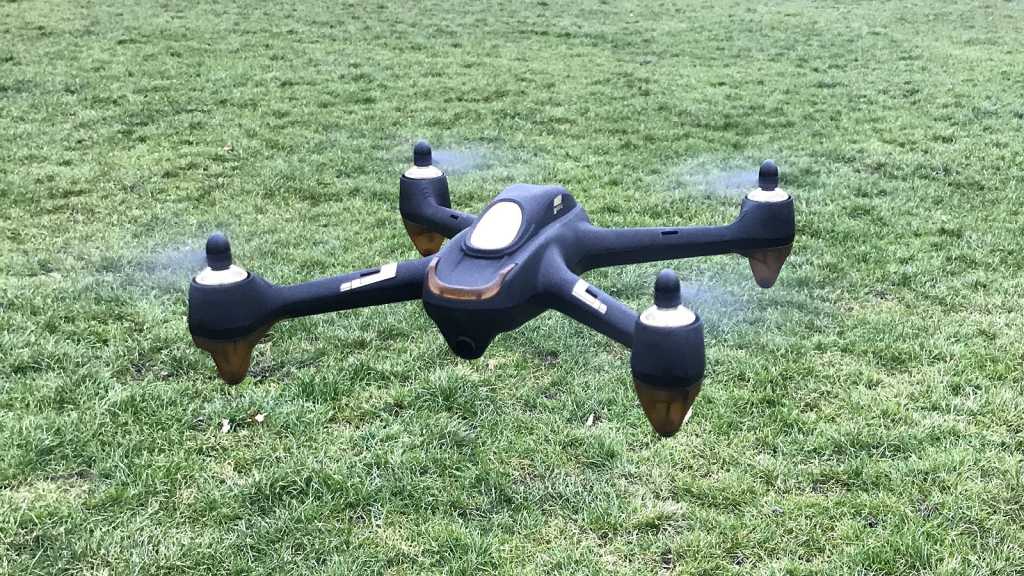 If you’re looking for an easy-to-fly drone with a first-person-view camera, the Hubsan H501S is well priced. But those wanting to record great aerial video and photos should look elsewhere.

We’ve seen a couple of Hubsan drones before, and the X4 FPV, reviewed, is ideal as a starter drone. The H501S X4 is larger and much more advanced, and also a lot easier to fly.

You can buy the Hubsan H501S X4 from GearBest for £252 ($314). Expect to pay import duty and handling fees if you’re ordering from GearBest’s China site and having it delivered to the UK. This is likely to make the total price around £300.

Taken at face value, this is a good price for a drone with GPS, brushless motors, a 1080p camera and a decent controller with a built-in 3.7in monitor that delivers a live feed from the camera, plus an OSD.

That’s a lot cheaper than even the entry-level DJI Phantom 3 Standard. But, as we’ll see, there are reasons for the lower price.

Note that we’re reviewing the ‘Advanced Version’ here, which comes with a bigger remote control with more features. The standard version is cheaper and comes with a more basic controller (although it still has a colour screen for FPV).

The H501S is a 220mm drone, which refers to the distance between the motors, diagonally. It doesn’t have tall landing feet, instead relying on small standoffs beneath the motor, which means you can’t easily take off – or land – in long grass.

It’s quite compact for a non-folding drone, and very light at 410g. There’s a choice of black and white, and both have gold accents. 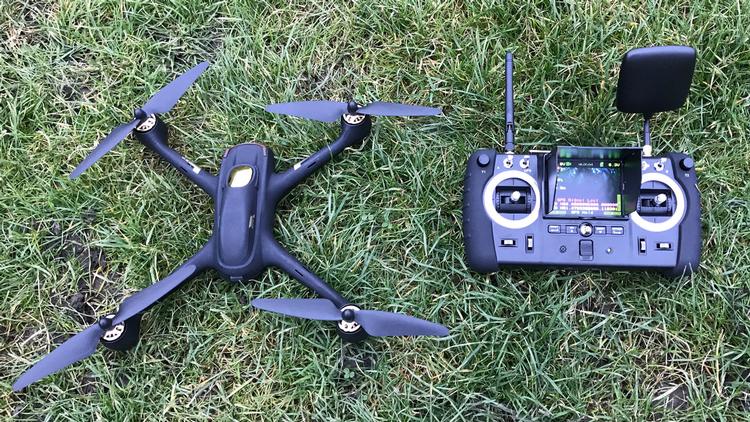 A hinged cover at the back opens to reveal the battery and connector, and Hubsan supplies a basic balance charger. The sample we were sent by GearBest came with a European power supply and no adaptor for the UK.

At the front of the drone is a 1080p camera that’s fixed in place with no gimbal or stabilisation. You can insert your own microSD card underneath. We found a 64GB card worked with no problems as long as you insert it before connecting the battery.

Motors are brushless, which means they’re the same type as used by DJI and should last for a good long while.

Propellers screw on by hand, so it’s very quick to install and remove them for transport. You get a full spare set in the box.

The remote is large and, once you’ve added a whopping eight of your own AA batteries, pretty heavy.

It looks a little daunting at first, but the manual is well written and easy to understand. The main sticks feel like quality items and the screen has a handy pop-up sun shade.

We never needed to use the trim controls as the H501S flew beautifully out of the box. You will need the manual in order to set the switches at the top correctly, as you don’t flip them all upwards for the default setting. One is for GPS mode, and another is the Home switch – used to bring the drone back to its starting position. 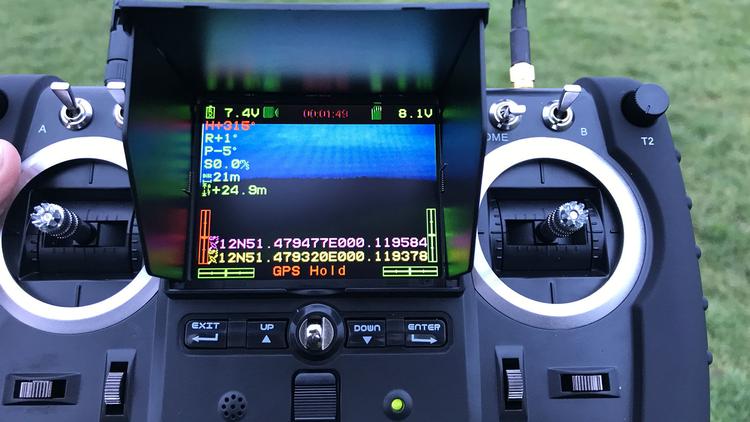 Another switches between headless and non-headless modes. Put simply, in headless mode the drone will move in the direction of the right-hand stick no matter which way the front is facing. This makes it amazingly easy to control for beginners, and you always have the fallback of the return-to-home switch if you lose control, or the signal is lost (at which point the drone will automatically return).

As the remote has a screen, there is no need for a phone app or any pairing: the H501S is ready to fly.

For its price, the H501S flies very well. It’s stable, easy to control and gives you confidence to fly high and far away, even when it’s quite windy.

By default it won’t even take off unless it has a solid GPS signal, and you have to delve into the on-screen menus to disable this behaviour. 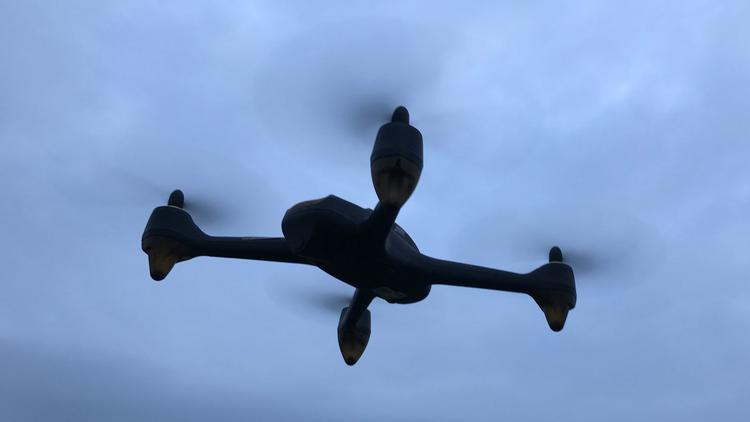 It isn’t the fastest around, and it’s not going to compete with a racing drone such as the ViFly R220, but it is a lot of fun. The battery lasts a surprisingly long time, too – around 20 minutes in warm conditions with low wind.

You can see on the screen how high you’re flying and how many meters away from you the H501S is. It also shows the voltage of the batteries in the controller and on the drone itself, and will warn you when either are running low. Some of the other on-screen display seems a bit unnecessary, such as the GPS coordinates, and the low resolution and bright colours do make it look a bit dated, but it’s functional.

You can use the menu keys to start and stop recording videos, and take photos, although you can’t do both at the same time.

The screen shows the recording time or, when taking photos, the remaining number that can be stored on the card.

The bad news is that the 1080p camera does not live up to expectations. At all. Photo and video quality is dismal, and likely to disappoint anyone thinking they’re getting a ‘baby’ DJI Phantom.

Here’s a photo taken at a height of around 200ft on a cloudy day (we’ve cropped it to 16:9, but it is otherwise unedited): 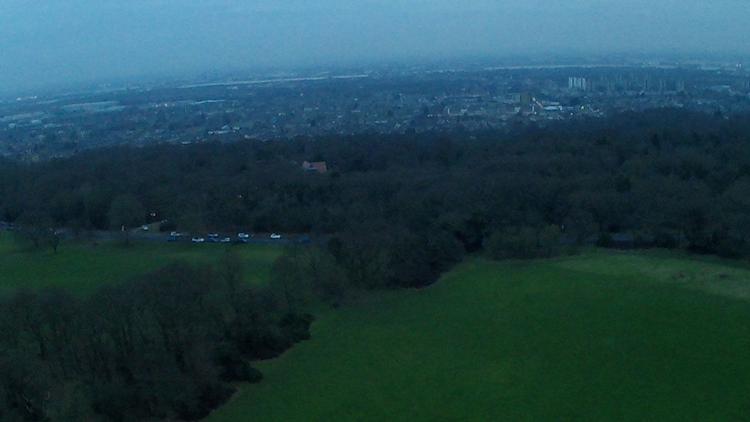 This is a 100 percent crop from the middle of the photo to show how little detail is captured: 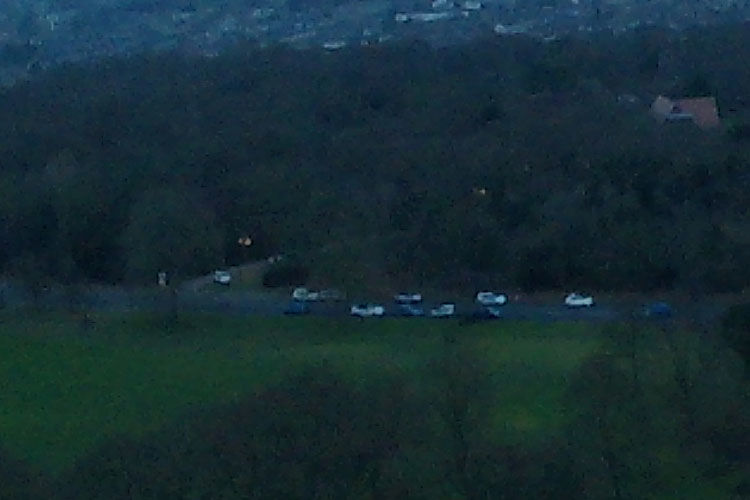 And, as we’ve said, there’s no stabilisation, so in addition to the smudgy, detail-free video, it’s also wobbly to boot. Plus, there’s quite a bit of distortion from the wide-angle lens.

If you’re willing to look to ebay and buy second hand, then you can pick up a DJI Phantom 2 Vision+ for similar money, and you’ll probably get extras such as spare batteries and a carry case too.