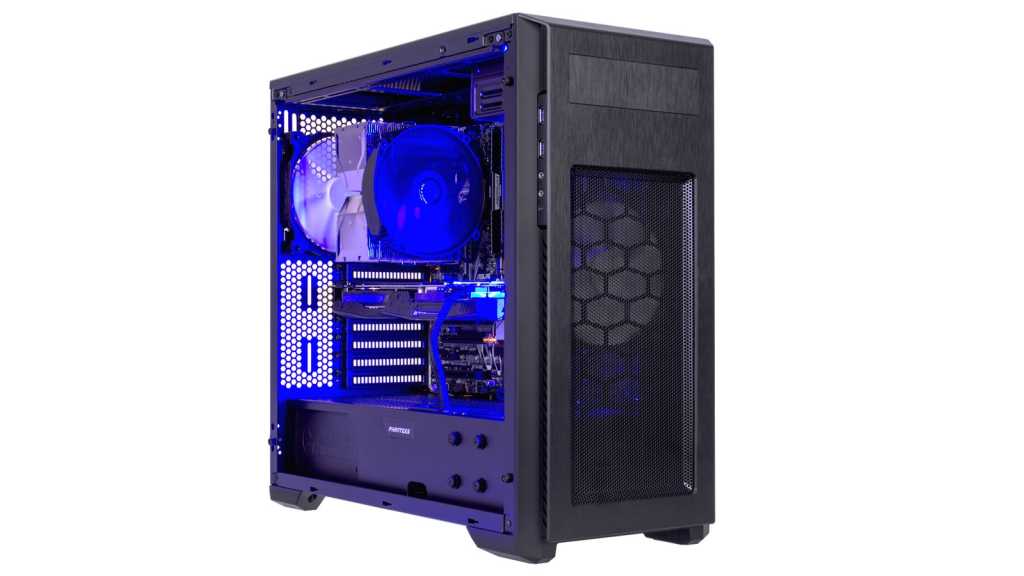 The Overclockers UK Titan Bayonet is a powerful and sensibly configured gaming PC, using Intel’s latest processor technology. It’s lower-end motherboard isn’t suitable for those considering a multi-GPU setup, but does offer some degree of future-proofing and comes with a superb warranty. It offers a pair of PCI-E x16 slots, although only one of these can run at full speed, meaning that this particular model isn’t certified for Nvidia SLI and therefore isn’t designed for upgrading by adding a second graphics card. But for those who want just the one graphics card, this is a great choice.

With the release of its 7th generation Core desktop processors codenamed ‘Kaby Lake’, Intel has introduced several refinements over the previous version as well as a welcome bump in clock speeds. As usual, Intel has also introduced a new motherboard chipset to go with the new CPUs and in this case we have the new Z270 enthusiast chipset to make the most of the overclocking capabilities of the processor. Here’s our review of Overclockers UK’s Titan Bayonet system which uses the new components.

You can buy the Titan Bayonet from Overclockers UK. When that web page opens you’ll see a base price of £920. This comes with a GTX 1050 graphics card, a 1TB hard drive and no operating system. As reviewed here with a GTX 1070, Windows 10, a 2TB hard drive and a 500GB SSD, you’ll pay £1558.93, but prices do fluctuate constantly due to changing exchange rates which alters the price of components.

The Titan Bayonet is housed in a rather striking Phanteks Enthoo Pro M ‘mid-tower’ system case fitted with a transparent side panel constructed from a single piece of tinted tempered glass. This gives the whole PC a rather expensive look and a somewhat flattering view of the internal components. It’s looks are further enhanced by the inclusion of two blue LED strip lights as well as illumination coming directly from the motherboard and the graphics card.

The Enthoo Pro M keeps the internals tidy, thanks to comprehensive cable management and a concealed lower compartment which hides the power supply, hard drive, and any associated wiring well out of sight. It also includes three removable dust filters and comes with a pair of quiet 140mm fans installed.

The Titan Bayonet is based on Intel’s Core i5 7600K chip, coming from the latest 7th generation of Core processors. Being a Core i5, it’s a quad-core design without the Hyper-threading support that’s reserved for the more expensive Core i7 versions, but with the benefits of Hyper-threading proving to be less than massive for gaming, the Core i5 delivers considerably more bang for your buck at this price point. Consider it a direct replacement for the previous Core i5-6700K which has proved so popular in our recent gaming PC reviews.

Unfortunately for those hoping for massive performance increases, Kaby Lake offers only minor gains over the previous ‘Skylake’ architecture, retaining an almost identical design with only a small increase in clock speeds.

It does have one trick up its sleeve, however, and that is a minor upgrade to the on-chip graphics processor which enables accelerated playback of streaming 4K video content. In fact, Kaby Lake is currently the only processor architecture capable of playing back 4K Netflix on a Windows PC. It also frees up more processing for other tasks while video is being processed.

The processor is fitted with a huge Alpenföhn Brocken 2 Cooler which comes with a 140mm fan of its own to maintain low noise. This has enabled the processor to be overclocked to 4.7GHz, which is considerably faster than you would expect to achieve from the equivalent Skylake-based PC – especially with air cooling.

At the heart of the system lies an Asus PRIME Z270-K motherboard, which sits a the more price-conscious end of a range of no fewer than sixteen models from Asus to employ the new Intel Z270 Express chipset.

Thanks to the Z270 Express chipset, this motherboard offers four extra PCI Express lanes compared to the previous generation which provides more bandwidth for fast, NVMe-based storage and high-end graphics cards. The Titan Bayonet uses a standard SATA SSD, but you can order it with considerably faster NVMe storage for an extra £120. This would slot into one of the the built in M.2 sockets on the motherboard. If that’s not fast enough for you, could install a second NVMe drive into the other M.2 socket and set them up as RAID 0.

The PRIME Z270-K is also supports Intel’s forthcoming Optane storage technology, so will be ready to take advantage of it once the plug-in cards become widely available.

Unlike more expensive boards in Asus’ range, you don’t get fancy touches like RGB lighting and only a modest number of USB ports is provided, although you do get a pair of USB 3.1 Type-A and a single USB 3.1 Type-C port at the rear, alongside two each of USB 3.0 and USB 2.0.

The board offers a pair of PCI-E x16 slots, although only one of these can run at full speed, meaning that this particular model isn’t certified for Nvidia SLI and therefore isn’t designed for upgrading by adding a second graphics card. You also get two PCI-E x1 slots and two of the standard PCI type.

Thankfully, the installed graphics card is more than capable on its own. Matched with the motherboard is an Asus GeForce GTX 1070 Strix Gaming graphics card, which is one of the better-performing GTX 1070s available, thanks to enhanced cooling and overclocking. It also provides customisable illumination options to make the most of that glass side panel.

As you might expect, the Titan Bayonet performs very well indeed. Although Kaby Lake CPUs don’t offer a huge advantage over Skylake versions MHz for MHz, we’re seeing some impressive results from this system, thanks to its substantial overclock to 4.7GHz which is a little faster than is typically achieved from a Skylake PC.

With a PCMark 8 Work score of 5184, the Titan Bayonet is just a few points clear of the fastest Skylake PCs we’ve tested so far, but this advantage grows significantly when the more processor-intensive Home and Creative tests come into play. This makes the Titan Bayonet suitable for all manner of heavy lifting, not just gaming.

Gaming results are also good, with the overclocked GTX 1070 achieving smooth graphics at 1440K in most cases and playable gaming at 4K also available in some instances. It comfortably outperforms benchmark results based on the standard Founders Edition GTX 1070. It’s also more than adequate for VR gaming, with a perfect score in the Steam VR test and scores of 9752 and 1768 in the 3DMark Orange and Blue VR tests respectively.

Under peak load, we measured a maximum CPU temperature of 75 degrees which is high for normal operation, but quite within acceptable limits for an overclocked PC such as this.

The Titan Bayonet comes with Overclockers’ improved three-year collect and return warranty which is one of the best we’ve seen lately.