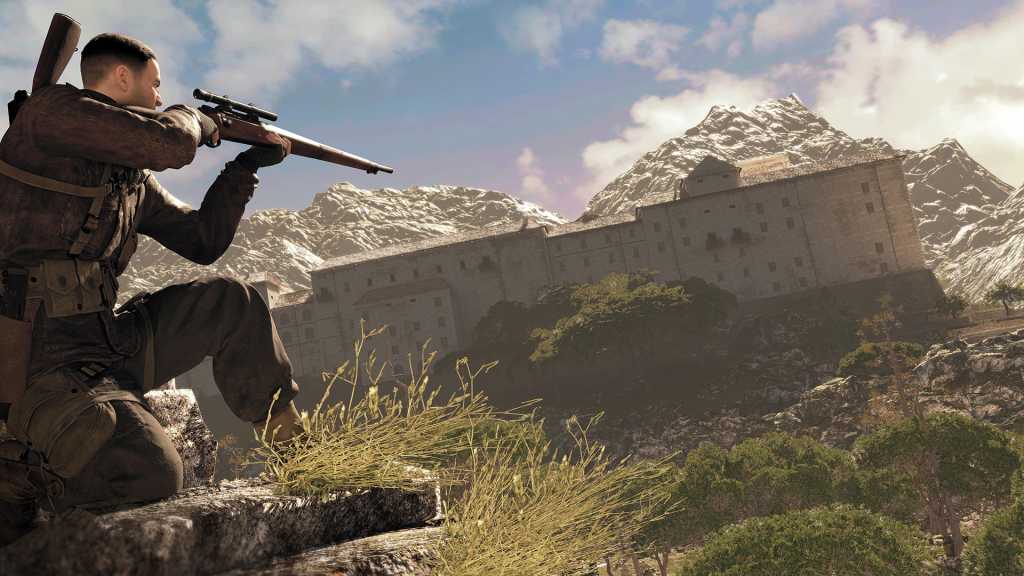 Sniper Elite 4 is without a doubt the best in the series, adding in badly-needed mechanics that provide a springboard from a good game to an amazing one. The open world layout and relaxed approach to objectives gives gamers the freedom to tackle each environment as they desire, and when combined with new climbing mechanics, opens the doors to impressive, long-distance shots. Bullet Time provides instant gratification, and gives an insight to the internal damage that other shooters completely forget about. If you’re looking for a solid open world sniper game, you’ll struggle to find one better than Sniper Elite 4.

The Sniper Elite franchise is famous for providing fans with a satisfying sniper-based shooter, and that’s not changing with Sniper Elite 4. While it’s much the same as previous games in the series, it comes with a handful of changes and improvements that take Sniper Elite from being a good sniper game, to one of the best. We’ve spent some time with the open world sniping game, and here’s our Sniper Elite 4 review. Read next: Best upcoming games of 2017

So, when is Sniper Elite 4 coming out in the UK and which platforms are supported? First of all, Sniper Elite 4 is now available to buy in the UK after a 14 February 2017 launch. In terms of platforms, the three big names are all present: PC, Xbox One and PS4, meaning everybody can get involved in the sniping action.

In terms of availability, gamers can order Sniper Elite 4 on Xbox One and via Amazon for £39.99 while the limited edition version from GAME can be bought for the same price. PC users, on the other hand, can head to Steam and pick up Sniper Elite 4 for £39.99. 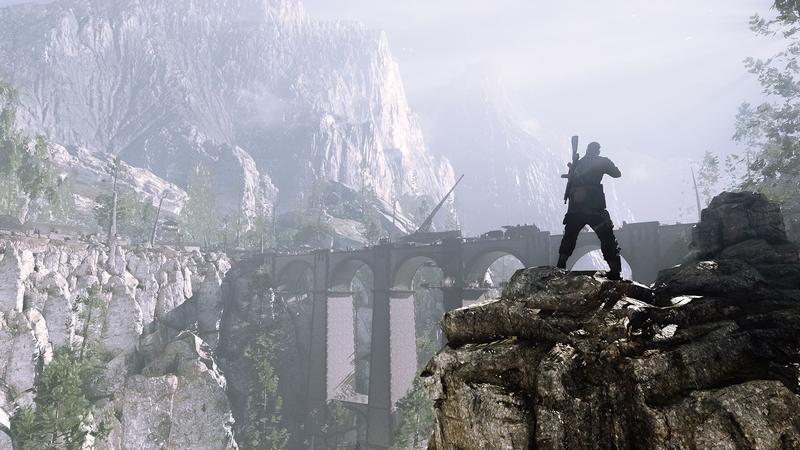 Sniper Elite 4 takes place in the aftermath of the events of Sniper Elite 3, with protagonist Karl Fairburne back to do what he does best: quickscope no0bs. Not just any no0bs though; key members of the German military during World War 2. Fairburne, an agent of the Office of Strategic Services, is tasked to head to Italy to assist the Italian Resistance force to fight against the Germans while completing his own tasks, from destroying downed allied planes to searching for vaccines and other medicines.

Beyond that though, the story isn’t as tantalising as it has been in previous games in the series. While we’ve been interested in the reasoning behind Fairburne’s rampage against the Nazis in the past, it just seems like the story was written based on the objectives of each mission/environment, and not the other way around. Beyond finding out who we were trying to assist, we just couldn’t become invested in the storyline.

But that’s fine. Why? Described as a “sniper’s paradise”, Sniper Elite 4 is focused more on gameplay than story – and it’s a smart choice too. In terms of sniper gameplay, Sniper Elite 4 is hands-down one of the best games we’ve ever played, with no game providing more satisfaction as you ping the helmets off the heads of your enemies from over 200m away. Those who want a Sniper sim aren’t interested in deep, brooding storylines and emotional protagonists, they just want to camp and headshot Nazis – what’s so bad about that? 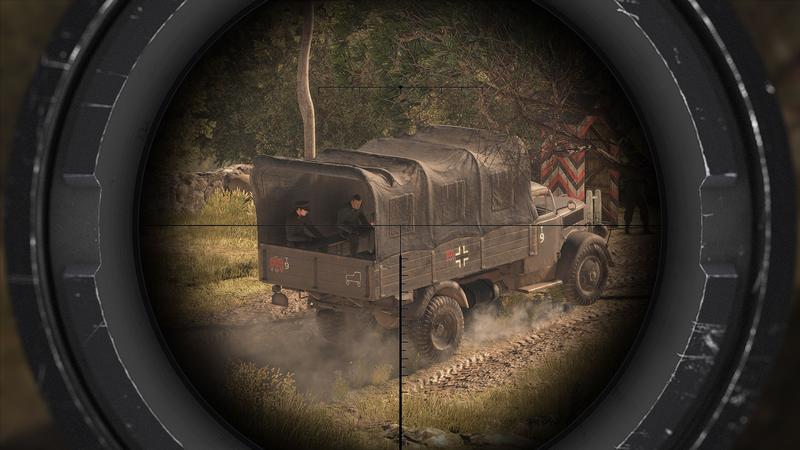 Sniper Elite 4 is similar to other games in the series, which is no bad thing, although it has received a number of much-need improvements following the popular Sniper Elite 3. The most noticeable change is that of the environments: the game’s sandbox environments are huge, three times bigger than those in Sniper Elite 3 according to Rebellion.

And what’s in all that extra space? An almost endless combination of ways to achieve the various objectives. The impressive and intricate level design featured in Sniper Elite 4 provides users with an array of ways to eliminate the enemy and achieve their objective, whatever that may be. You might stumble upon a drain pipe that you can climb to access a makeshift sniper tower, giving you a great view of the map in its entirety and lets you survey and plan your move.

Tactics are crucial in Sniper Elite 4; it’s not a run’n’gun game, nor is it a game where you can sit in a single spot and headshot your enemies. While that may be initially off-putting to some, the variety of ways you can tackle an objective mean that you can switch it up and creatively achieve your aims, helping to keep the game interesting – you never know what opportunities you’ll discover.

Of course, Sniper Elite wouldn’t be Sniper Elite without bullet time and we’re happy to say that it makes an appearance in the latest game. Bullet Time provides slow motion shots of the bullet as it leaves your gun and follows it along its trajectory until it reaches its target – but that’s not all. 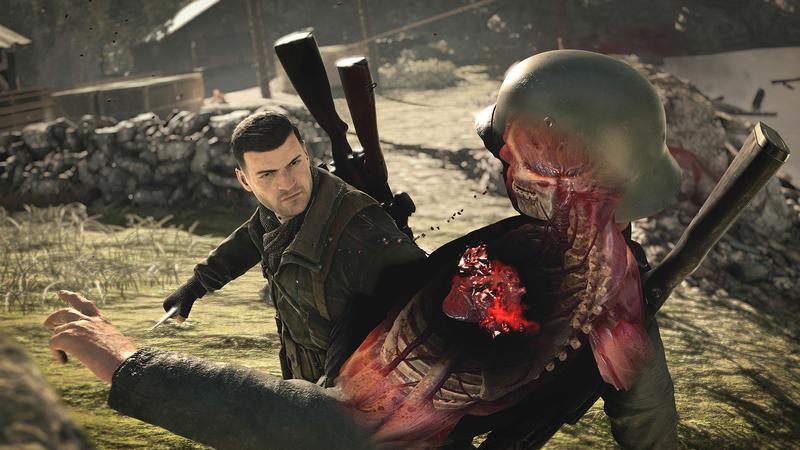 As cool as it is following your bullet through foliage and other tiny gaps along its route, it’s the X-ray view of the enemy’s body as the bullet enters that provides the real satisfaction. No other game provides a mechanic as satisfying as this, as you get to see all the damage you’ve done in real time. It’s instant gratification at its best. Got a headshot? Watch the skull shatter and brain implode in slow motion. Throat shot? Watch it travel through the muscle and sever the spinal cord. There’s even an animation for an *ahem* groin shot that’ll make guys wince.

While Sniper Elite 4 isn’t open world in the same sense as Grand Theft Auto, missions and other objectives can be undertaken in any order. This adds to the sense of freedom that Rebellion are pushing with Sniper Elite 4, as it gives you the opportunity to tackle missions in any way that you desire. This can work a charm, especially if an objective is heavily guarded. In other games, you’d have to deal with it and take them out, but in SE4 you can head to another objective, cause a huge deal of commotion and draw the enemies from your main objective away from their posts, making life a little bit easer – until they return, anyway!

The new game mechanics allow players to shimmy, leap across ledges, hang from windows and more. This gives access to better vantage points than was previously possible, and can come in handy when trying to make a quick escape.

It means that if you’re spotted sniping from the first floor of an abandoned house, now you can make a stealthy exit out of the window and hunt for your next vantage point without being spotted. While it’s not as good as the free running of Assassins Creed and it has room for improvement, we wondered how the game series has survived this long without it. 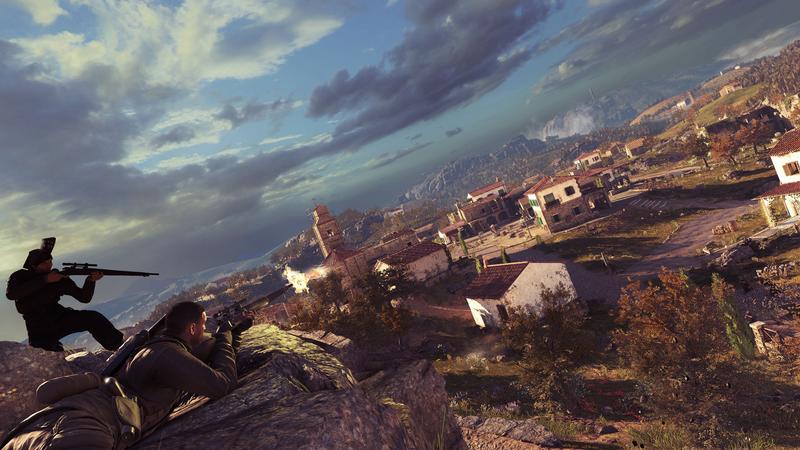 The combination of larger environments and enhanced traversal mechanics mean that there are more ways to kill your targets than ever before. Hunt for makeshift sniper nests, shimmy along ledges to well-hidden areas and leap across crumbling buildings when being pursued. Or, find the perfect spot to take out your target from afar, travelling through foliage, cracks in walls and broken doors. It makes the open world more immersive if you know that you can access most of it, and again, adds a new level of creativity to an already popular sniper franchise.

Of course, it’s not only the environment and mechanics that have had a facelift in Sniper Elite 4, as the NPCs have gone back to school and are now more intelligent than ever. While it won’t help with your math homework, enemies are now more natural and will react in a more human way. Upon hearing gunshots, enemies will wander around trying to triangulate where the noise was coming from, but it’s once you’ve been spotted that the improvements become clear.

We were flanked by NPCs. FLANKED! We thought we could take on a squad of troops and had a head-on firefight, taking cover to the side of a doorframe in an abandoned house. However, what we didn’t notice was that at the same time, another team had approached from the back, split into two smaller groups and hit us from the left and right at the same time.

Needless to say we were wiped out, but we weren’t mad, we were impressed. It means that you really do have to use your head and be aware of your surroundings when playing Sniper Elite 4, because all it takes is one slip up to get trapped and killed.

Our one criticism of Sniper Elite 4 is that it doesn’t reward you for completing all the side missions, beyond being able to 100 percent the level. With so many side missions available across all missions, we feel that they should have some kind of impact on the story in a way that other open world games do. Say, for example, we ignore a side mission to destroy an anti-air gun, we should have to face a harder challenge later in the game because we hadn’t destroyed it. Sadly, this isn’t the case, and with no unlocks or other kind of motivation to complete the side missions, we quickly started ignoring them and focusing on main missions, which become increasingly difficult as the levels progress.