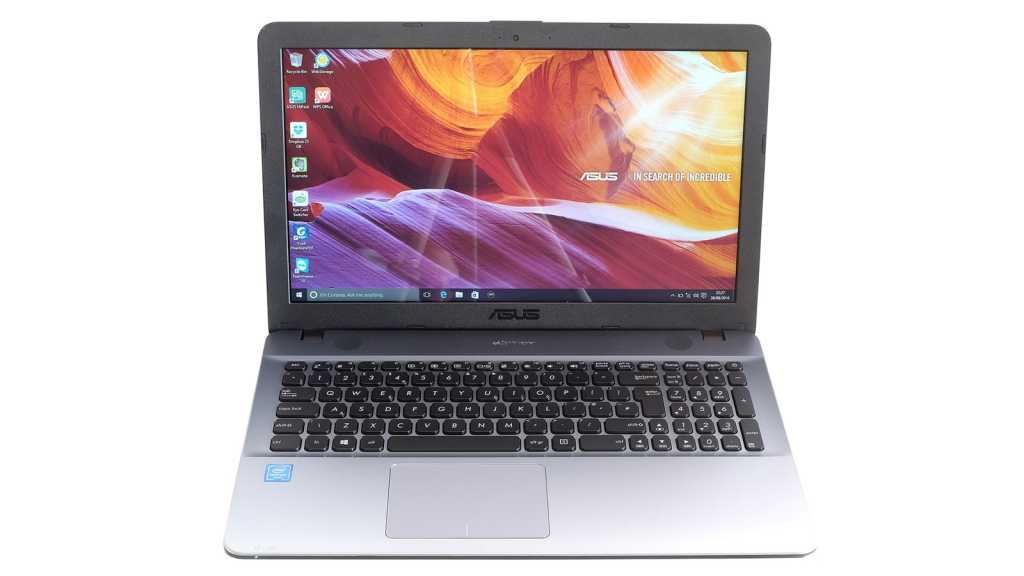 The Asus VivoBook Max X541SA is a laptop made for those who want a solid, cheap computer. It has some neat extras such as a large hard drive, a fake brushed metal finish and speakers that sound much better than most at the price. If you need a computer you’ll use extensively most days, though, we’d strongly advise getting one with an Intel Core i3 CPU rather than the Intel Pentium used here. While it’s the “next best” option, it is noticeably slower, regardless of what you’re doing. If £300, or even £400, is your max budget you also have to accept that you won’t get a dazzling screen. The VivoBook’s dated display technology ensures image quality is, at best, passable. Still not put off? We won’t deny there’s a good amount on offer here for those on a very tight budget, with plenty of storage, wide-ranging connectivity and reasonable build quality.

The Asus VivoBook Max X541SA is a low-cost 15.6in laptop. It’s here for people who want to spend as little as possible while still getting something that looks and feels like a proper laptop.

At £299 it’s a small fraction of the cost of the sort of computers you might see advertised on TV and in cinema ads. There’s a catalogue of little ways you feel the pinch of the budget cuts, but the one you should consider above all others is performance. Thanks to its Intel Pentium CPU and hard drive, it feels significantly slower than the HP 250.

You can buy the Asus VivoBook Max X541SA for  £ 299 from Currys. It’s among the cheapest new laptops you’ll find outside of a Chromebook. However, there are even cheaper options if you’re happy to buy from Chinese websites, such as Chuwi’s 14.1in LapBook which costs way less than £300 even factoring in import duty.

At this sort price you don’t get many extras, but a large hard drive gets you almost 10x the storage of an entry-level ultrabook. It comes with a one-year warranty.

From arm’s length you could believe the Asus VivoBook Max X541SA is metal. The lid and keyboard surround look like brushed aluminium, and the lid has a silver-blue gradient that looks like the kind of thing you might see on an advert selling some sort of “ice cold” drink.

No prizes for guessing this, but the X541SA is actually all plastic. Like most cheap laptops, the underside is black too, rather than matching the finish of the rest. Similarly, the lid flexes under finger pressure. You have to accept a few build compromises like this if you budget only stretches to £300.

A perhaps more important area is the keyboard. If a keyboard surround flexes too much, it can affect typing feel, and is a constant reminder your laptop isn’t that well-built. There is some slight flexing to the Asus VivoBook Max X541SA keyboard, but not under the pressure of normal typing.

The construction is fine, just not fancy.

One crucial aspect to take on-board is the Asus VivoBook Max X541SA is a laptop for home or work use, not one perfect for taking cross-country on your travels. It weighs 2kg and is 27mm thick, which we’d consider too chunky to carry around day-long. Any 15.6-inch laptop outside of something like a Dell XPS 15 (which has an unusually small footprint) is going to be a rucksack-hogger too.

Unlike skinny laptops, though, the Asus VivoBook Max X541SA has an optical drive on its right side. It’s a DVD multi-writer.

There’s a good spread of connections as well. On the left are USB 2.0, USB 3.0 and a USB 3.1 ‘C’ sockets plus VGA and HDMI video outputs and an Ethernet port. There’s a bit of everything. A full-size SD memory card slot also sits on the front’s underside.

Almost no premium laptops feature VGA ports these days, but one may be essential if you have a fairly old monitor you need to hook up.

As a larger 15.6-inch laptop, the Asus VivoBook Max X541SA can fit in a NUM pad alongside the normal keyboard keys. There’s plenty of space to go around, and no keys have been made utterly tiny as a result.

The feel is a little more unusual, particularly now we’re accustomed to fairly slim chiclet keyboards. There’s a lot of travel to the Asus VivoBook Max X541SA’s keys, but they are also very springy. Perhaps a bit too springy. Your fingers bounce across the keyboard, and it takes a while to bed into.

In a more expensive laptop this would be a major issue, but like the all-plastic build, a slightly patchy keyboard is to be expected at the price. There’s also no keyboard backlight to help when working in a darker room. At this price we’d have been bowled over is Asus had managed to fit this in, though.

The Asus VivoBook Max X541SA trackpad is solid, but again has some elements that seem rather basic. Positives include that it’s very smooth for a plastic trackpad, is a good size and doesn’t suffer from any annoying driver issues that make it appear to wilfully misbehave with Windows 10.

However, its clicker is quite stiff, a little harder to press than is necessary, and loud. This only becomes obvious when you try to double-click something, but it may grate if you’re switching from an out-of-date but once higher-end laptop.

Like almost every laptop this affordable, the Asus VivoBook Max X541SA uses a TN screen rather than the IPS kind more popular these days. TN panels tend to have fast response times, but almost universally look worse than the IPS type because of their relatively narrow viewing angles.

This doesn’t just affect looking at the screen from an extreme angle, as the character of the display alters from just a few degrees of tilt. Looking at the laptop dead on, the contrast will actually appear different at the bottom of the screen than the top.

This is only instantly obvious when you’re looking at a pure black/colour screen, but is why, to image quality purists at least, most TN displays never look that good. TN monitors tend to fare better than laptop screens, and this particular one isn’t great.

It’s 15.6 inches across, giving you plenty of space with which to work, but as resolution is relatively low at 1366 x 768, there aren’t enough pixels to make cramming in loads of windows a good idea.

Cementing its position as a home laptop rather than one to use outdoors, max brightness is unremarkable at 210cd/m2 and a glossy screen finish makes reflections an issue if you’re not careful about how the laptop is angled.

Colour performance is limited too, although that’s no surprise given the use of a twisted nematic panel. The Asus VivoBook Max X541SA covers 59 percent of the sRGB colour standard, 41 percent of Adobe RGB and 42.2 percent of DCI P3. While not a bad result for this type of panel, it’s not great for editing photos.

In person, though, colour is one of the screen’s stronger suits. It’s perfectly good for general use, even if the punch of its tones is reduced by the fairly poor 344:1 contrast.

The X541SA has a typical low-cost laptop screen. It’s flawed in many respects, but is the norm at the price.

One other big sub-£300 laptop sacrifice is performance. The X541SA uses an Intel Pentium N3710 CPU rather than the Core i-series processors we’d recommend to anyone using Windows 10 every day.

For a little more context, all Core i series can be considered ‘premium’ chipsets, even the Core i3. Intel’s Pentium, Celeron and Atom models are used in lower-cost machines.

For a laptop like the VivoBook Max, the Pentium range is the best of the three. It uses more energy than an Atom, but tends to offer more power than either an Atom or Celeron chipset.

The Pentium N3710 is a quad-core CPU with a clock speed of 1.6GHz, and a 2.56GHz burst mode. It offers acceptable performance with Windows 10, but we wouldn’t say much more than that.

Apps take a little while to load, and the system feels less responsive than a laptop with a Core i3. It’s an important distinction as models like the HP 250 G5 offer Core i3 power for £350. That’s more money, of course, but if you use your laptop several hours a day, we’d argue the performance boost is worth paying for. Core i processors run Windows 10 as Microsoft intended, where Pentiums feel compromised.

Doing much more than browsing, writing docs and so on makes the X541SA feel distinctly slow. And even the basics of Windows run slower than they would in a slightly more expensive machine.

It’s time to consider how patient you really are. However, it doesn’t make Windows 10 feel like a flat-out chore, unlike some Atom-based laptops.

Aside from the CPU, the X541SA has 4GB DDR3 RAM and a 1TB hard drive. There’s plenty of storage, but this is a slow 5400rpm drive, which will contribute to the slightly slow Windows 10 feel.

The Pentium N3710 also has a much worse GPU than the Core i3 family. It’s the Intel HD 405, making all but the most basic of gaming inadvisable. As the laptop has a 1366 x 768 pixel screen we couldn’t try our usual 1080p gaming tests, but even at 720p the results are terrible. With settings minimised, Thief runs at 5.9fps and Alien Isolation at 8.25fps. Neither is remotely playable, and those games slow down to 2.5fps (Thief) and 7.5fps (Alien) at native resolution with visual effects increased.

If you want to play some ultra-casual titles, the Asus VivoBook Max X541SA should handle them just fine, but for more console-like games you’ll need to look for ones at least a decade old.

This is also a fairly loud PC, with fans that seem to turn on regularly even when you’re doing something non-demanding like watching a video. They are not high-pitch but do have a distinct, almost husky tone that is quite noticeable in a quiet room/office. It’s a wheezer, the Asus VivoBook Max X541SA.

The Asus VivoBook Max X541SA’s speakers are a pleasant surprise after all that. For a cheap laptop, they’re rather good. They live behind the circular grilles above the keyboard and have a much fuller tone, and louder output, than we expected given the sacrifices elsewhere.

At max volume you will hear some flat-out clipping distortion with certain content, but there’s real mid-range bulk here and an approximation of bass. We’d happily watch a film with this laptop in a pinch as a result.

We wouldn’t rely on the Asus VivoBook Max X541SA for use on a work trip, though, as the battery life is not good enough. Lasting just three hours 57 minutes playing a 720p video on loop at standard 120cd/m brightness (the sort of level you might use indoors), stamina is remedial.

It’s final, conclusive proof that Asus hasn’t made this laptop for people who need a portable computer. However, four hours is actually the classic ‘standard’ stamina for work machines like this. Now that (semi) portable machines have become the default buy for almost anyone with £500 or more to spend, we just don’t see laptops this tied to the charger that often anymore.

Such pedestrian battery life is disappointing when the Pentium N3710 is still a fairly low-power CPU with an up-to-date 14nm architecture, though.