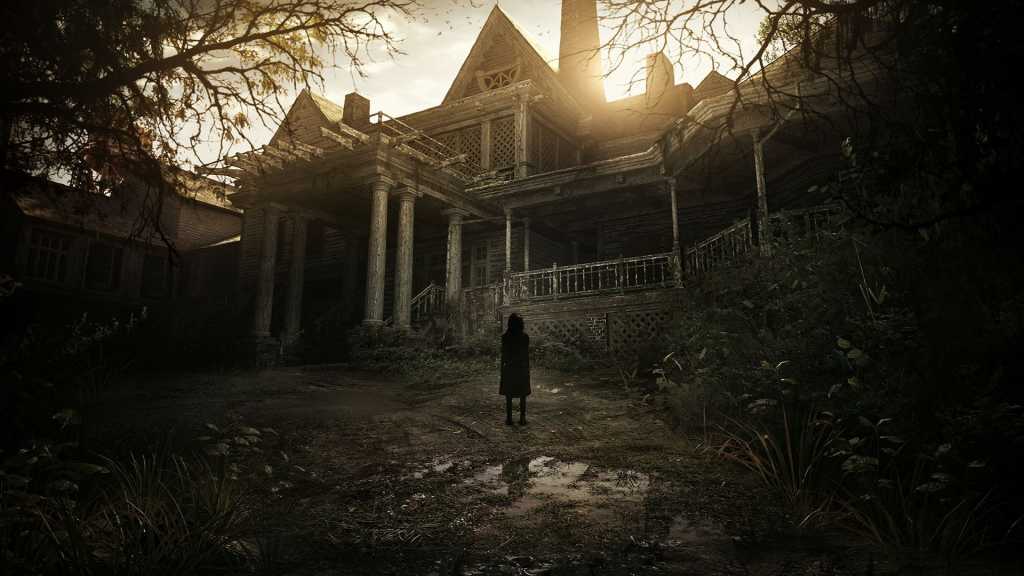 Resident Evil 7 isn’t perhaps the total reinvention some fans hoped for, and at times its modern influences don’t quite mesh with the more traditional puzzle solving and combat in the rest of the game. Still, if there’s one thing it does do well, it’s scare you, and in that sense alone this is a welcome return to form for the Resident Evil series.

After seven numbered entries (including the prequel Resident Evil Zero) and countless spin-offs, it’s probably not too surprising that publisher Capcom took Resident Evil 7: Biohazard as an excuse for a bit of an overhaul. The new game brings the series into a first-person viewpoint, and echoes the likes of Alien: Isolation by bringing in more enemies that you simply have to run and hide from, rather than tackle head-on, while upending the series’ themes with a delve into Texas Chainsaw Massacre territory.

Read next: Most anticipated games

But how does it hold up? Is Resident Evil 7 a return to form, or a stumble in the dark? We’ve played through the whole game, so read on to find out what we thought, and whether this is one of the best Resident Evil games yet.

As you might expect for a major third-party game, Resident Evil 7 is coming out on both the PlayStation 4 and the Xbox One, in addition to the PC, with a UK release date of 24 January 2017.

There are a couple of differences between the platforms though. The biggest one is that the PS4 version is fully compatible with PlayStation VR, so you can play the entire game in VR (if you dare). It’s worth noting though that we haven’t had the chance to test it out in VR, so this review is based purely on our experience playing on a PS4 Slim hooked up to a TV.

If VR isn’t your thing, you might arguably be better off picking up the Xbox One version, because it’s part of Microsoft’s Play Anywhere scheme. That means you can buy one copy of the game and play it on both PC and Xbox One, with all of your save data seamlessly transferring between the two. This only works if you buy a digital copy through either the Microsoft or Xbox digital stores however, not on Steam or retail editions.

As for buying the game, you can grab it from Amazon for £34.99 on PC or £42 on console. Amazon also has an Xbox One download code for the DLC season pass for £24.99, and the deluxe edition of the game (which includes the season pass) for £69.99. Meanwhile if you head to Game you can grab an exclusive steelbook edition with a few bonus in-game items. And if you want to make the most of Play Anywhere, head to the official Microsoft store to get the base game for £52.99, or the deluxe for £69.99.

You can find out more about the game, including deals and any DLC news, in our Resident Evil 7: Biohazard rumour round-up.

For the most part, the Resident Evil games have followed the ongoing adventures of the likes of Chris Redfield, Jill Valentine, and Leon Kennedy, who by this point have killed so many zombies and mutated monsters that it’s hard to imagine that any of it could faze them any more. It’s with that in mind that this game instead drops us into the head of a brand new character: Ethan Winters. His wife Mia went missing three years ago, and seemed lost for good, until an out-of-the-blue email from her tells him to come and find her at a Louisiana farm.

Predictably enough, he goes along, and equally predictably, all is not as it seems. The farmhouse is decrepit and rotting, Mia is nowhere to be found, and the Baker family don’t seem to be especially hospitable. They sit somewhere on the wrong side of Deliverance on the ‘murderous hillbillies’ scale, and are as demented as they are dangerous. It’s that crazy edge that really makes them work – rather than cold and calculating, they’re completely unpredictable, and the game finds some pretty consistently surprising things to do with them.

The new setting, new characters, and narrower scope help pull the story and give it weight. Gone are the globetrotting threats of Resident Evil 6, replaced by a more personal evil, and for the most part it feels correspondingly more dramatic. Unfortunately it loses some of that focus across the 10-hour story though, by the end giving in to some grandiose temptations and in the process losing much of its charm – especially once it moves on from the Bakers, whose villainous presence is sorely missed in the endgame. There are also a few loose ends, which we suspect may be tied up in the DLC (or perhaps the game’s alternate ending), leaving the story as-is feeling slightly incomplete. And the less said about the final boss the better – the last five minutes of the game almost undo a great deal of the good that’s come beforehand.

While the Resident Evil series started off as pure survival horror, over time the games began to ramp up the action. That really began with the excellent Resident Evil 4, but the fifth and sixth games each escalated the action and in turn suffered when it came to scares, leaving a lot of fans feeling that for a horror series, Resident Evil really wasn’t very horrifying any more.

Resident Evil 7 is in part an attempt to go back to the series’ roots, rediscovering the tense survival horror that made its name, but in large part it’s achieved that by turning to the series (at least in its main games): a first-person camera. All of a sudden, instead of watching over Ethan’s shoulder, you’re right inside his head, and instead of monsters coming for him, it really feels like they’re coming straight for you.

This is a clear bit of inspiration from the likes of Alien: Isolation and the Amnesia games, which proved decisively that the first-person perspective is good for more than just action-packed shooters. Those games’ influence is felt just as strongly in the shift towards stealth-based horror. Just as Alien: Isolation gave you no choice but to run and hide whenever the iconic xenomorph reared its ugly head, so Resident Evil 7 introduces a few enemies who you just can’t tackle head-on (not for the first time, of course – that was Resident Evil 3: Nemesis). Whenever you find yourself up against one of the Bakers, rather than going in guns blazing you’ll instead have to sneak around and stick to the shadows, before breaking into a mad dash if you’re unlucky enough to get spotted. It’s these sections, which will feel familiar to anyone who tried the game’s ‘Beginning Hour’ demo, that are the game at its best: making you feel tense, powerless, and totally terrified.

The game doesn’t stay that way for long, and perhaps one of the most surprising elements is just how much it feels like a traditional Resident Evil game once it gets going. Before long you pick up a pistol, and your arsenal later expands to include a shotgun, flamethrower, grenade launcher, and even a machine gun. You can use all of these to slow down and stun the game’s biggest enemies, but also to kill the more straightforward opponents. These are primarily the ‘Molded’, humanoid monsters built out of the sort of black mould that anyone in a damp house will be all too familiar with. In grand Resident Evil tradition, you’re best off aiming for the head, but you can also blast off the odd limb to slow them down.

Get outside of combat, and things feel even closer to the series’ roots. You’ll pick up green herbs to craft first aid kits out of. You’ll have to keep a tight hold of your inventory thanks to limited storage space. You’ll wander around finding animal shaped keys to fit matching animal shaped locks, or solve puzzles by casting shadows on the walls to open hidden doors. It’s all very… well, very Resident Evil. This is less reinvention than rediscovery, a return to the core gameplay of the 1996 original, simply updated with a modern sheen and a fresh perspective.

There is one major innovation left to the game, though it perhaps feels slightly under-utilised. Every now and then you’ll stumble across a VHS tape, and if you plug it into a VCR you’ll find yourself stepping into another character’s shoes for a brief segment of the game. Not only is this a great way to strip you of your accumulated gear temporarily, it’s also used smartly to tease upcoming areas, or reveal undiscovered secrets you might otherwise miss. The core gameplay in these sections isn’t radically different, but they’re a welcome way to break the game up and see events from a point of view other than Ethan’s.

We played Resident Evil 7 on a PS4 Slim, so we can’t comment on performance on any other platform, including the PS4 Pro or PS VR. We had smooth performance throughout though, with reliable framerates and few bugs. We once ran into a minor AI issue that saw an enemy walking relentlessly into a wall after we closed a door in its face, but otherwise had no problems. Loading times were pretty lengthy, often a minute or two, but thankfully they only occur infrequently: when loading up a save file, restarting after a death, or loading into and out of one of the VHS segments.

The game’s graphics are mostly impressive, especially the lighting: the Baker estate is dark and oppressive, and you’ll find yourself clinging to the light sources dotted around. We imagine some players may find the game too dark, and at times it is genuinely difficult to see what’s going on while using the recommended brightness settings, but for us this was part of the game’s charm: it made us genuinely scared of darker areas and unseen threats. On a less positive note, a few of the textures are a bit lacklustre, and the facial animations are definitely below par, but overall these don’t detract from the game too much.

Any graphical glitches are more than made up for by the sound design however, which is impeccable. Each of the game’s locales has its own selection of distinctively unsettling sounds, from the creaking of the house to the gentle squelch of mould beneath your feet. It’s enough to keep you constantly on edge, always trying to tell if those are your footsteps you hear or something else’s, if that sound was the house settling or something else rather unsettling. And as great as the game’s jump scares are, as frightening as its enemies get, they only work because the sound design simply refuses to ever let you get comfortable.