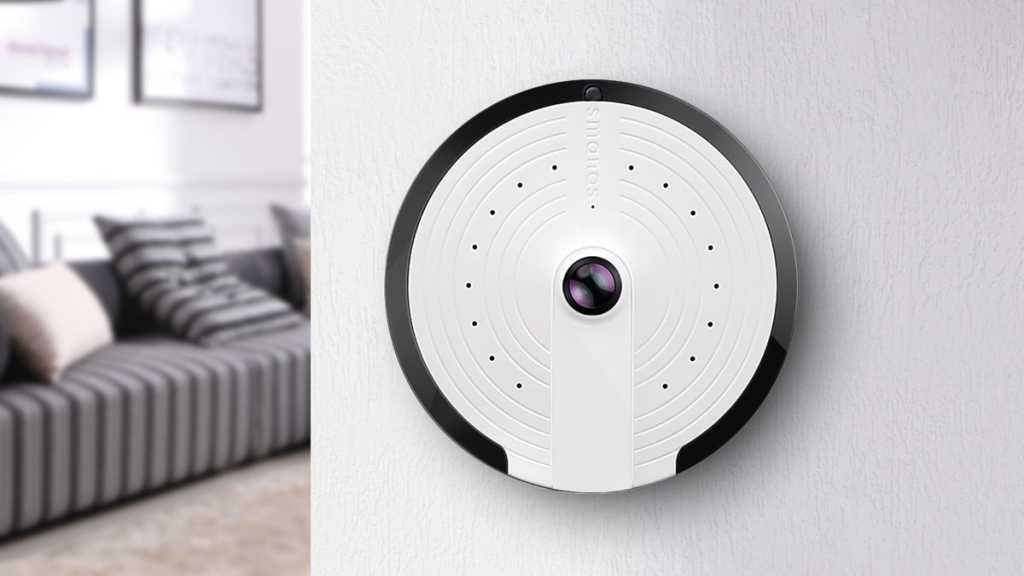 The Smanos UFO may not be the sleekest smart security camera on the market, but it’s perfect for wall and ceiling attachments with its low-profile design. While there may be other cameras on the market that offer slicker app interfaces for a similar price, the ability to host your storage locally via microSD along with optional paid cloud backup (coming soon) is unique to a small handful of smart security cameras on the market. If you don’t want to pay out for monthly storage fees and want 24/7 recording capabilities on a budget, the Smanos UFO is a decent option.

Following an explosion of smart home technology a couple of years ago, there are now a myriad of smart home security cameras that offer everything from 24/7 recording to a built-in siren to deter intruders, and everything in between. The unique design and claims of 360-degree coverage set the Smanos UFO apart from its counterparts when it was announced at the end of 2016, so how does it perform? Here’s our Smanos UFO smart security camera review. Read next: Best smart security cameras for use in the home

So, how much is the Smanos UFO in the UK, and where can you get your hands on it? First off, the Smanos UFO will set consumers back £149 in the UK, a rather standard price for a 1080p night vision-enabled smart home security camera without all the bells and whistles of high-end alternatives (built-in siren, etc). It’s similar in price to the likes of the Logi Circle, Netgear Arlo Q and the Canary smart camera.

In terms of availability, despite being announced back in October 2016 and having an official UK price tag, the Smanos UFO is yet to reach stores in the UK. We’ll update this section once the Smanos UFO becomes available to buy in the UK.

So, what makes the Smanos UFO stand out in terms of its design and build? Just by looking at the camera, you can easily tell that it offers something unique compared to other smart security cameras on the market. While most smart security cameras boast a similar design, the Smanos UFO, as the name suggests, looks somewhat like a stereotypical UFO you see conspiracy theorists shouting about (but don’t worry, it won’t abduct your livestock).

The Smanos UFO is circular and relatively flat as it was designed not to sit on a shelf or table, but to be attached directly to walls and ceilings whilst providing a low profile. The last thing you need is a bulky camera hanging from your living room ceiling, right? It’s small and inconspicuous measuring in at 106 x 106 x 36mm, meaning you can install it and forget that it’s there until it’s needed. 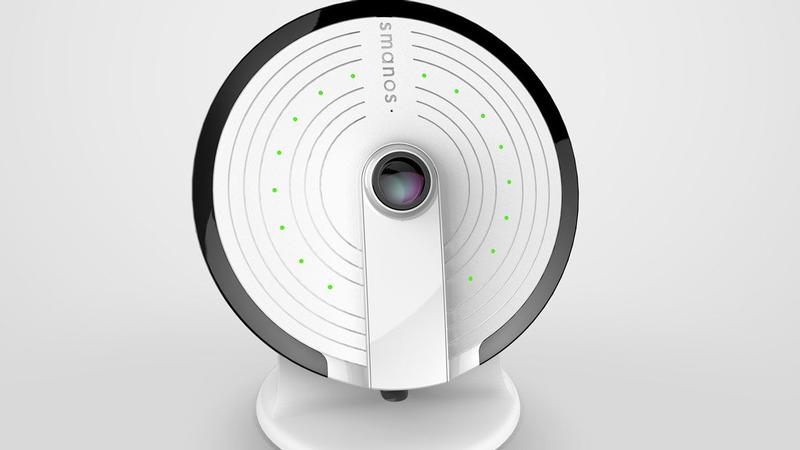 The benefit of attaching the UFO to the ceiling is that it can provide a 360-degree view of the room below, although this isn’t 360-degree viewing in the sense that it’ll record both the front- and rear of the camera. It’s something we’ll go into a little more detail below. However, the ceiling mount also makes the UFO less likely to be spotted by intruders, as it’s not at eye-level like many others are.

One noticeable feature is the inclusion of LEDs around the outer rim of the UFO. Why? The main purpose of the LEDs is to provide status updates to the user as the camera has no display. It features varying patterns, letting you know when the camera loses connection to Wi-Fi, whenever somebody is watching the live stream, etc. But if that sounds too annoying for you, don’t worry, as there’s an option to disable the use of LEDs from within the Smanos Home app for iOS and Android.

The Smanos UFO features a full HD (1080p) camera with a fisheye lens that Smanos claims is “surveillance-grade” although that sounds more like a marketing term rather than a sign of quality. Although with that being said, the image quality produced by the UFO is fairly impressive and we see no distortion due to the use of a lens (with a tell-tale sign being chromatic aberration around the edges of the image) and the included night vision provides relatively clear images, even in a dark environment.

You can view the camera stream via the Smanos Home app available for iOS and Android, although, rather strangely, there’s no web portal for those that don’t have access to iOS or Android. With it being a fairly standard feature amongst smart security cameras, we’re somewhat surprised that it isn’t offered with the UFO. 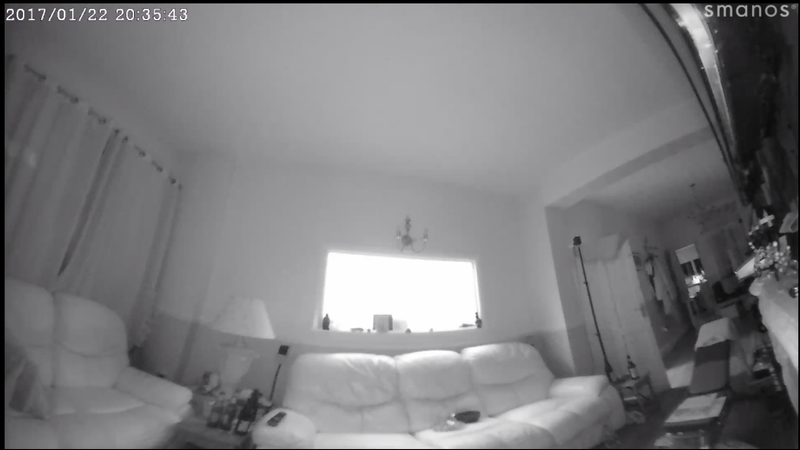 Within the app, users are presented with three views to choose from – birds-eye, panoramic and quad-view. Birds-eye provides users with the standard fish-eye lens view and is ideal for when the UFO is attached to a ceiling as it leaves no blind spot, while panorama provides users with a rather standard view for home security cameras and is best used when the camera is stood upright. The quad-view allows you to focus the camera on four parts of the room in one single view, more like a traditional security setup (albeit from one single camera). The one drawback of the quad-view mode is that the individual views cannot be tweaked on a per-user basis, with Smanos implementing a ‘one size fits all’ approach.

Users can also set up motion detection from within the Smanos Home app, and specify times when it’s active – you don’t want to be notified about movement when you’re at home with your family, do you? You can also specify the sensitivity of the motion detection, with the option to choose between three distance settings – medium, near and far. Then, if you are notified of motion, you can use the two-way talk system to speak to whoever is in the room, from family members to your pet dog. 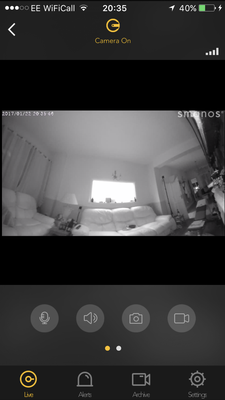 So, let’s talk about the 360-degree coverage because it isn’t like 360-degree cameras available for VR enthusiasts and doesn’t feature both front- and rear-facing cameras. In standard terms, it offers a 180-degree field of view as you can’t see behind or above it for true 360-degree coverage. It works well in ceiling mode because the camera offers something close to 360-degree coverage as you don’t need to see behind it, just in front of it. Get it? While it’s technically 360-degrees, it’s also not at the same time. Confusing stuff.

The Smanos UFO is one of very few smart security cameras on the market that offer local storage via MicroSD card. This means that unlike with most smart security cameras, you don’t need to pay a monthly fee for the cloud-based storage which, depending on the manufacturer, can be over £20 a month on top of the upfront fee for the camera. Cloud storage does have benefits, like footage being secure if the camera is broken or destroyed by an intruder, but consumers don’t like to pay monthly fees for a service that many believe should be included in the upfront cost of the camera. The Smanos UFO supports MicroSD cards up to 32GB, with the camera automatically rewriting old footage as it goes along.

Smanos claims it’ll also offer a paid cloud-based storage solution, although details of which are yet to be announced. 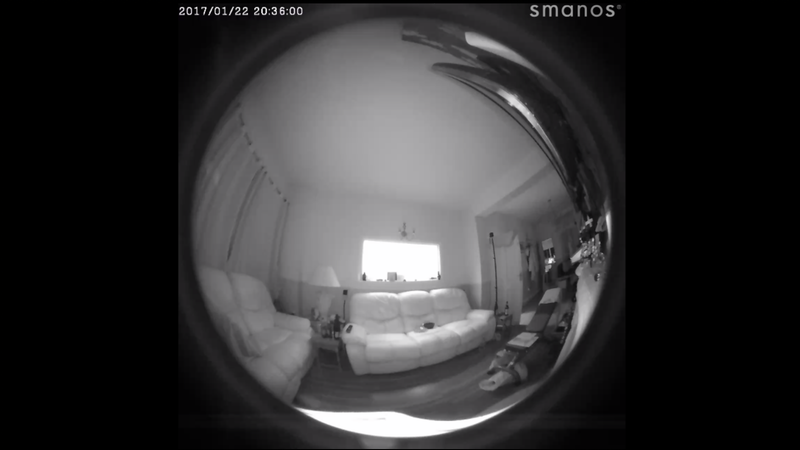 However, there is one rather fatal issue with the Smanos UFO that could undo all the hard work by the company – connectivity issues. During our time testing the Smanos UFO, there were occasions where we simply could not connect to the live stream despite the app claiming it was connected to the camera. We’d tap play to enable the live stream and it’d just sit there loading until the app crashed around a minute later. We’ve tried force-quitting the app, restarting our iPhones and toggling the camera on and off remotely, all without success. In fact, we can’t quite work out what the issue is as most of the time, it comes back online by itself.