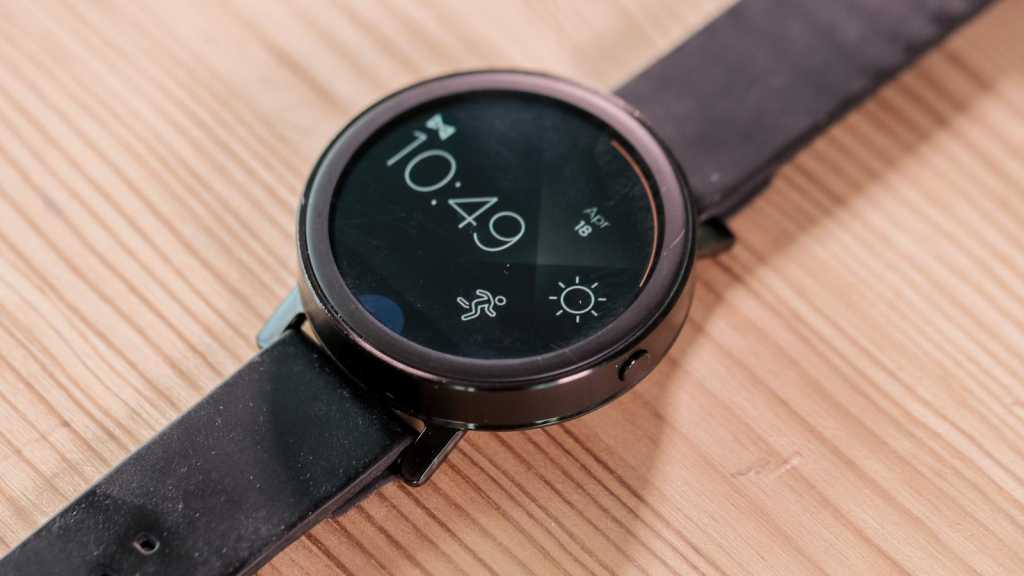 The Misfit Vapor ticks all of the right boxes. It’s stylish, waterproof, has built-in GPS and a heart rate monitor, it works with both Android and iOS and features a processor designed specifically for wearables, dated though it is. There’s also storage that lets you store music right there on the device, and the software is intuitive and easy to use on the vivid circular display despite some sluggishness at times. It’s also a great price for a smartwatch with GPS tracking (but you need your phone). It’s let down by patchy performance and average battery life but we can still recommend it as an affordable way to get GPS tracking for under £200 though also consider the Fitbit Versa.

Since being acquired by Fossil, Misfit has slowed down its output of smartwatches and wearable devices. The Misfit Vapor has been a lot time coming, but it’s worth the wait – just. It’s a shame that it wasn’t released in January 2017 when we first saw it though, as it would have been more unique and outstanding in the smartwatch market.

Misfit delayed the Vapor to change a couple of key things: it no longer offers on-board GPS and now runs on Wear OS (formerly Android Wear 2.0) rather than Misfit’s own software. These are two quite big changes in taking away a useful (but expensive) feature and trusting Google’s Wear OS rather than use its own designed UI like Samsung does with Tizen.

Thankfully the Vapor is an accomplished smartwatch that’s one of the better options on the market, but not the best.

The Misfit Vapor is available  direct from Misfit for £185 or from  Argos in the UK and  Best Buy in the US.

This sets it way below the £329 Huawei Watch 2 and £329 Apple Watch Series 3, but those watches have full GPS and optional 4G. The Skagen Falster is £279 and lacks even a heart rate sensor, so the Vapor is better value in this sense.

The Misfit Vapor is a really good-looking device. We love that Misfit has opted to go for the traditional round watch shape, and has managed to do so without requiring the flat tyre that some other watches including Motorola’s Moto 360 suffer from.

The screen on the Vapor is 1.4in AMOLED with a 326 ppi. The great contrast meant the blacks really are black too and look good against Misfit’s red colour palette.

The watch uses a virtual bezel around the circumference of the screen for navigation between applications and its menus and using this bezel doesn’t cover up the content of the display itself so is easy and efficient on such a small screen.

It’s a tad fiddly and sometimes buggy, but it’s clever despite the fact you could just swipe up and down on the touchscreen it surrounds.

The watch comes only in a 44mm size, which is pretty wide so you might want to steer clear if you have very thin dainty wrists. The body is stainless steel and is available in Jet Black or Rose Gold. There are interchangeable straps available too if you’re looking for the link bracelet look.

Inside the Vapor is a Snapdragon 2100 processor which is designed specifically for wearables, as well as 4GB storage that will allow you to store music on the watch itself.

The 2100 is a bit long in the tooth now though, found as it is also in the LG Watch Sport and Huawei Watch 2. This means performance in the Vapor is a little under what we’d hope for in a smartwatch in 2018 but seeing as it’s a two year old chip we aren’t that surprised.

All this functionality means you can go running without your phone and the Vapor will track your route. One thing the watch makes you do that some others don’t is use the Misfit app in conjunction with the Wear OS app.

Most Wear OS watches will track your activity using Google Fit, and this is still an option. But if you want to use Misfit’s own watch faces (which are quite useful and well-designed) then you’ll have to connect the watch to the app and make a Misfit account (though the latter isn’t essential).

The GPS tracking works well, but you need to be connected to your phone for it to work, unlike with the Fitbit Ionic which has standalone GPS (but costs £100 more). The Vapor also doesn’t auto track runs, so you need to start a workout on the watch every time.

If you’re a swimmer, you can also wear the Vapor to track your swim as it is water resistant up to 50 metres. We’re not sure that this is quite the right device for serious swimmers as it’s a little bit bulky on the wrist, but it’s certainly a nice added bonus if you do swim from time to time and are interested in keeping track of that activity.

There’s a heart-rate monitor built in as well, plus an accelerometer, altimeter and gyroscope. You’ve got Bluetooth and Wi-Fi connectivity, too, but the latter (as with all smartwatches in our experience) drains the battery significantly.

We turned off Wi-Fi and the always on display and got a couple of days out of the Vapor rather than one. That’s a shame, as Wi-Fi is handy for keeping the watch connected when you stray out of Bluetooth range of your phone but are still on the Wi-Fi network.

However, turning off these features on the LG Watch Sport saw it last for three to four days, so the Vapor is not that great in this regard.

Charging happens via USB and magnetic charging cradle, which you’ll have to reach for a fair bit. The Vapor tracks your sleep, but when you need to charge at night this often you may find yourself not using it.

Surprisingly, Misfit originally opted not to go for Wear OS, and instead built its own software that works fully with both iOS and Android devices. The Vapor was delayed as Misfit reversed its decision, and what we have on the final product is Wear OS with some Misfit-red tints in the UI and a few watch faces that include Misfit app complications.

Otherwise, this is Google’s interface and the Vapor suffers in the market for being so late – we first saw this watch in January 2017 and are now reviewing it in April 2018!

As ever, Wear OS is the best way to receive notifications, browse your calendar, check the weather and plenty more right there on the watch itself without needing to check your phone.

Integration is best with Android, but if you’re an iPhone user the Vapor works well, and as a bonus will sync and play nice with the Apple Health app. It works well, but we still find the Fitbit Versa and Fitibt app a better looking, more fitness focussed alternative.

In all this is a good move as Wear OS has decent support for popular third party apps such as WhatsApp, Uber and Citymapper, whereas a Misfit OS, presumably, did not.