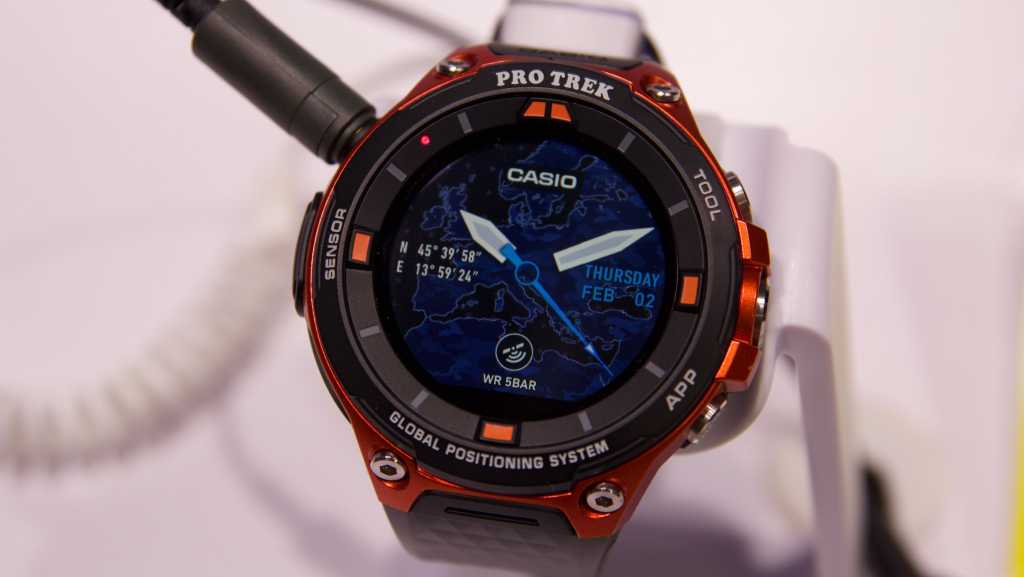 Our short time with the Casio WSD-F20 left us impressed. It’s hard to make a fully featured outdoors GPS watch look cool, but we reckon Casio has managed it – even if it is quite a masculine design. The offline GPS mode is a huge draw here, but you’ll need to be near a plug every evening unless you want to get lost on the trail.Android Wear 2.0 is present, meaning the watch is very responsive and takes advantage of the new OS to bring its advanced features to the fore. At $500 it’s pretty expensive, but then again for what it offers it’s a better choice for the outdoors when compared to the Apple Watch or Samsung’s Gear S3.

As we break in 2017 we have a huge range of choice when it comes to smartwatches. If you include fitness trackers like Fitbit then there are hundreds to pick from and it’s often hard to distinguish one from the other, let alone which is the best smartwatch for you. Casio has announced a new smartwatch at CES and it’s one for the outdoors.

Part of Casio’s Pro Trek Smart range, the catchy-named WSD-F20 is a fully featured watch that caught our attention as it is one of the first smartwatches in the world to run Android Wear 2.0, Google’s long-awaited new watch operating system. We took the WSD-F20 for a spin at CES – here’s what we thought.

Also check out our rundown of the best smartwatches.

That is steep, but as we found, this is smartwatch absolutely packed with functionality.

Compared to last year’s WSD-F10 (which we reviewed here at CES 2016), the WSD-F20 is a step up in design. Orange can be garish on some products, but we preferred the colourful model to the other standard black one. The orange detailing is nicely subtle, with premium feeling metal buttons and screws on the outer rim.

The screen is a 1.32in dual-layer touchscreen LCD. It has a colour TFT with 320×300 pixels and then a separate monochrome LCD. These work together superimposed on each other, with the time always displayed on the monochrome layer and then apps on the colour LCD. This allows a plethora of different combinations of modes and functions to work together to give you the best possible visibility. It works very well and seamlessly.

A rubberised strap with diamond pattern detail sits flush with the watch itself, all of which contains the clever dual-layer LCD screens. The glass of the screen is anti-dirt coated, while at the bottom of the screen there’s a neatly hidden, water-resistant microphone.

It all adds up to one excellently designed, premium feeling smartwatch. It is inevitably large on the wrist though – almost too large but just about right. Including the band the whole thing weighs 92g which is not too heavy at all.

Like most smartwatches, the WSD-F20 keeps its best tricks under the hood. The WSD-F10 lacked GPS, which is pleasingly present on this new model. How it is uses it is very clever. The GPS is low-powered to help battery life and can display full colour maps. Even when your connected smartphone is offline and out of cellular signal, you can still call up maps thanks to the GPS’ ability to call on American, Russian and Japanese satellites. This gives it a great advantage over other mainstream watches that effectively become useless as mapping tools when without a 4G connection.

The watch links GPS data using the award winning YAMAP GPS tech with a full colour map on your wrist to accurately triangulate your current location. From there you can do a surprising number of things such as plan routes, record specific points and write memos. Despite the relatively small display, we found these functions quite intuitive though a tad fiddly. The fact it all works offline is enough to forgive the slight awkwardness of data input.

As well as this headline feature, there’s also an altimeter, compass and barometer on board, all of which can be displayed one at a time as part of the watch face. You can also set location, altitude and more to take advantage of the dual screen technology. This is all protected up to 50 metres under water.

All these features add together to make a watch that Casio claims can track a large number of sports and activities, namely trekking, cycling, fishing, skiing and paddling. While we’ve seen most of those on watches before the fishing one is interesting as it can give you tips and location information on the best places and times to find your catch, as well as record when you catch a fish. Of course, we’d have to see this in action as to whether there’s enough data out there for it to really be useful, but it’s cool to see Casio thinking outside the box.

Casio WSD-F20 review: Software and use

The WSD-F20 has caught attention for being one of the first smartwatches to run Android Wear 2.0. In our limited time with the watch we found it snappy and responsive, with some changes to the menu system that makes running through lists easier. However with the WSD-F20 so heavily geared towards outdoor activity, it did feel at times a tad hard to find the regular functions you’d expect of a regular consumer watch such as calendar and messages. If you’re after a notification device to browse and send email, this is not the one.

Having said that it is a fine choice if you in any way lead the active life. The software has been excellently tweaked, along with the dual-layer screens, to support the many functions on offer in a relatively linear manner, which is no mean feat.

The battery, with GPS functions on Casio claims, will last a full day of use. Without GPS and in normal timepiece mode, the battery is good for around a month, though obviously it’s at its best and most useful with GPS on. Still, features such as the altimeter and barometer don’t need GPS to function and could help you out when trekking.

It will work fully with Android smartphones and even with iOS if you’ve got an iPhone 5 or later, but with limited functionality. Casio couldn’t give us any more detail than that at the time of writing.