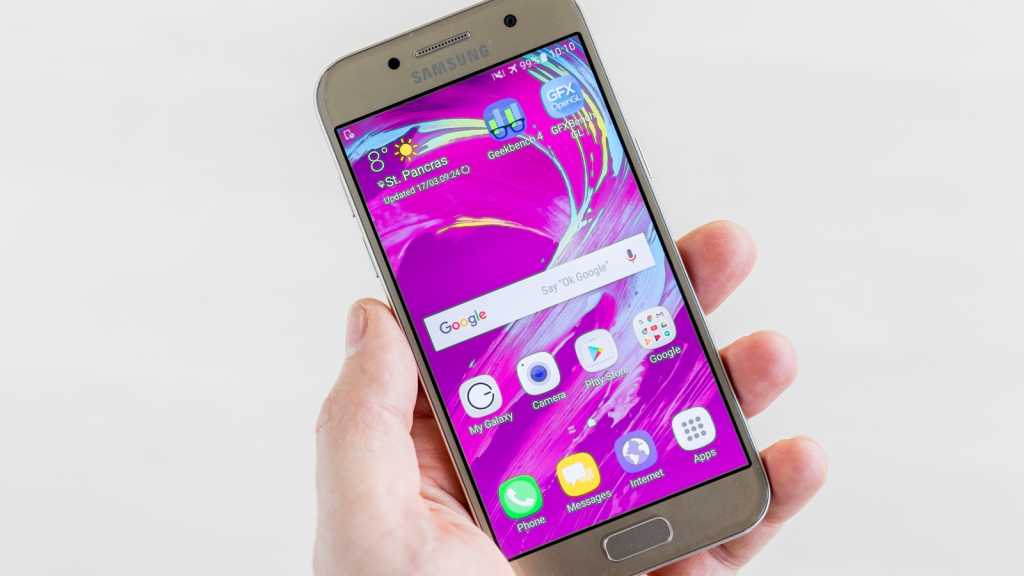 Overall, the A3’s improvements for 2017 are pretty significant and make this nice-size, reasonably priced phone even more appealing for those who like the idea of the Galaxy S7 but can’t quite stretch their budget that far. Its waterproofing and fingerprint sensor are both convenient and practical, and the good-looking design makes it easy to forget that this phone has a price tag that’s half that of many flagship phones. That said, there are alternatives if you’re willing to look to other brands, and you might be surprised to find that you’ll get more for your money. We’d recommend checking out the Moto G5 and Nokia’s new offerings before you buy the Samsung Galaxy A3 to see whether they appeal to your wallet a bit more.

Samsung has updated it’s A series phones for 2017, which comprises the A3, A5 and A7. The bestseller is the A3, which is the smallest of the three models with a 4.7in screen like the iPhone 7. We’ve put the new Samsung Galaxy A3 through its paces to find out how it compares with its predecessors, rivals and bigger siblings to help you decide whether or not to buy it. Read on for our full Samsung Galaxy A3 review.

There are rivals available that come close to matching the specs and performance of the Galaxy A3 with a lower price tag, some of which we’ll talk about later in this review, but if you’re set on a Samsung phone we think this is a good option, particularly when you consider its good-looking design.

Plus, we expect the price of the A3 to drop quite significantly quite quickly, so, if you’re willing to wait, the price tag will likely soon be more appealing.

If you’re after the Peach Cloud colour option, you’ll find that exclusively over at Carphone Warehouse here. 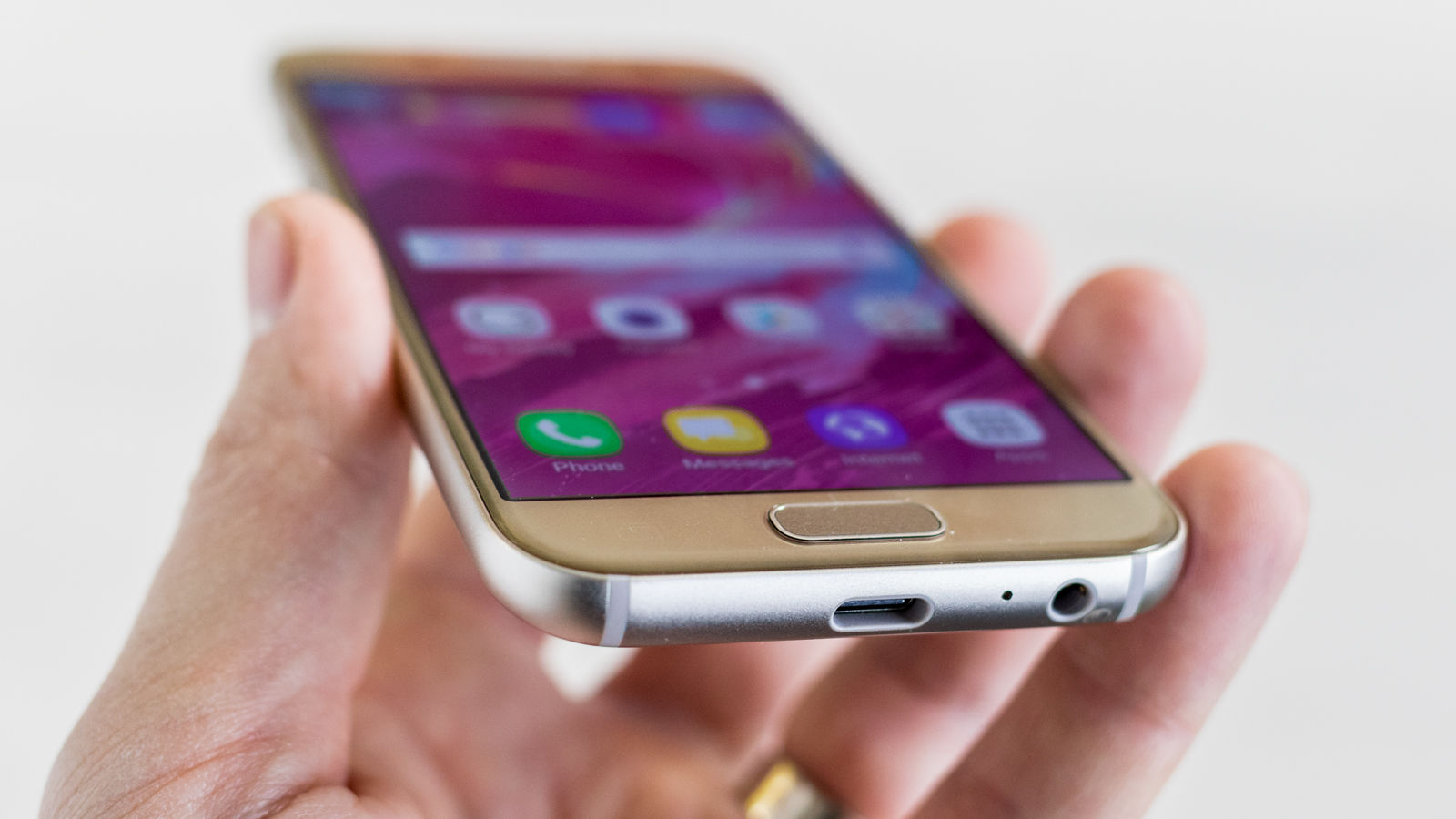 The first thing that struck us about the new A3 and its bigger siblings is its design, which now looks even more like Samsung’s flagship Galaxy S7 thanks to its slightly curved back and rounded edges that feel brilliantly comfortable in the hand.

We’re not the biggest fans of the shiny back because it soon becomes covered in fingerprints, but the lighter colours tend to hide those quite well so we’d recommend avoiding the black model if that’s something that bothers you. The model we reviewed was gold and we found that it did really well at hiding the fingerprints. There’s also a blue model and the Carphone Warehouse exclusive Peach Cloud option too.

The Galaxy A3 has actually increased in thickness in this latest update. Last year’s model was 7.3mm and this year’s measures 7.9mm. It’s a tiny difference though so you’re very unlikely to notice, and we think 7.9mm is slim enough.

That extra thickness could in part be due to the small battery bump and the addition of a fingerprint sensor, which is new for the A3 this year.

Samsung has also moved the phone’s speaker from the bottom of the device to the right side after last year’s move from the back to the bottom. This time the idea is that the position of the speaker means you’ll never cover it up, whether you’re playing a game or watching a video and it works brilliantly. It’s a great move.

One of the most exciting things about the A3’s design and build is its new IP68 waterproof rating like the Samsung Galaxy S7, which is a real boon for the clumsy like us and will put your mind at rest if you’re out and about with your phone in the unpredictable British weather. This rating makes the A3 waterproof up to 1.5 metres for 30 minutes, so you could even take it into the pool on holiday if you’re feeling brave enough. 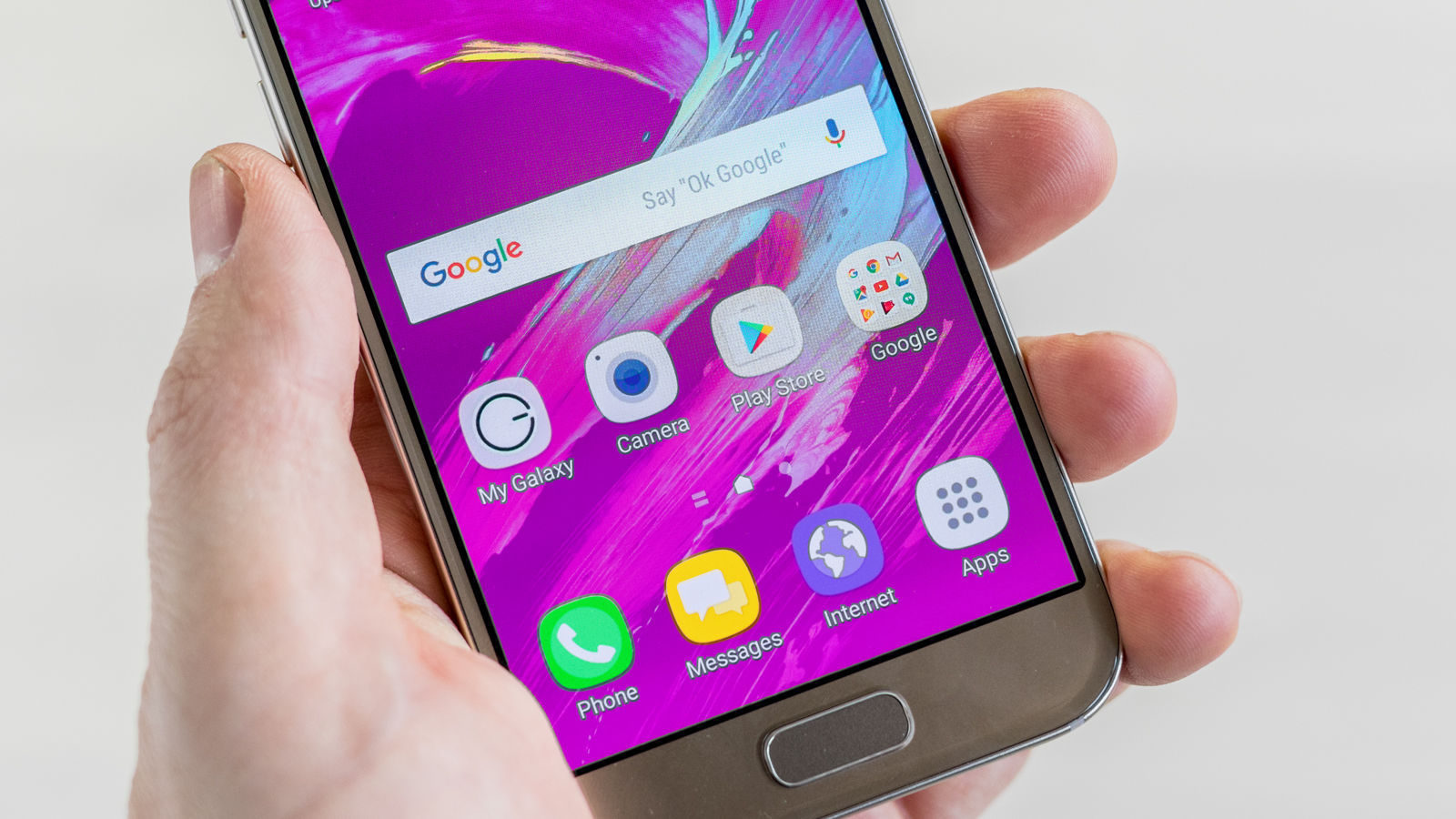 The Galaxy A3’s 4.7in screen hits the sweet spot for us when it comes to screen size. Most flagship phones these days have a screen that’s 5in or bigger, but we prefer the portability of the 4.7in screen size and find it to be a good balance between being usable, enjoyable for gaming and videos, and a comfortable fit in the hand, pocket or bag.

The screen itself is Samsung’s HD Super AMOLED display, which the company describes as 2.5D due to its slight curve at the edges. Super AMOLED screen tech is our favourite of all phone displays thanks to its vibrant, slightly oversaturated colours and excellent contrast. This screen hasn’t changed since last year’s models and is still HD at 1280×720 pixels, but due to the smaller screen size this still offers a pixel density of 312ppi. It’ll be sharp enough for most users, but it’s worth noting that there are phones with lower price tags that offer better screens, including the upcoming Moto G5 with its Full HD (1920×1080 pixels) screen. 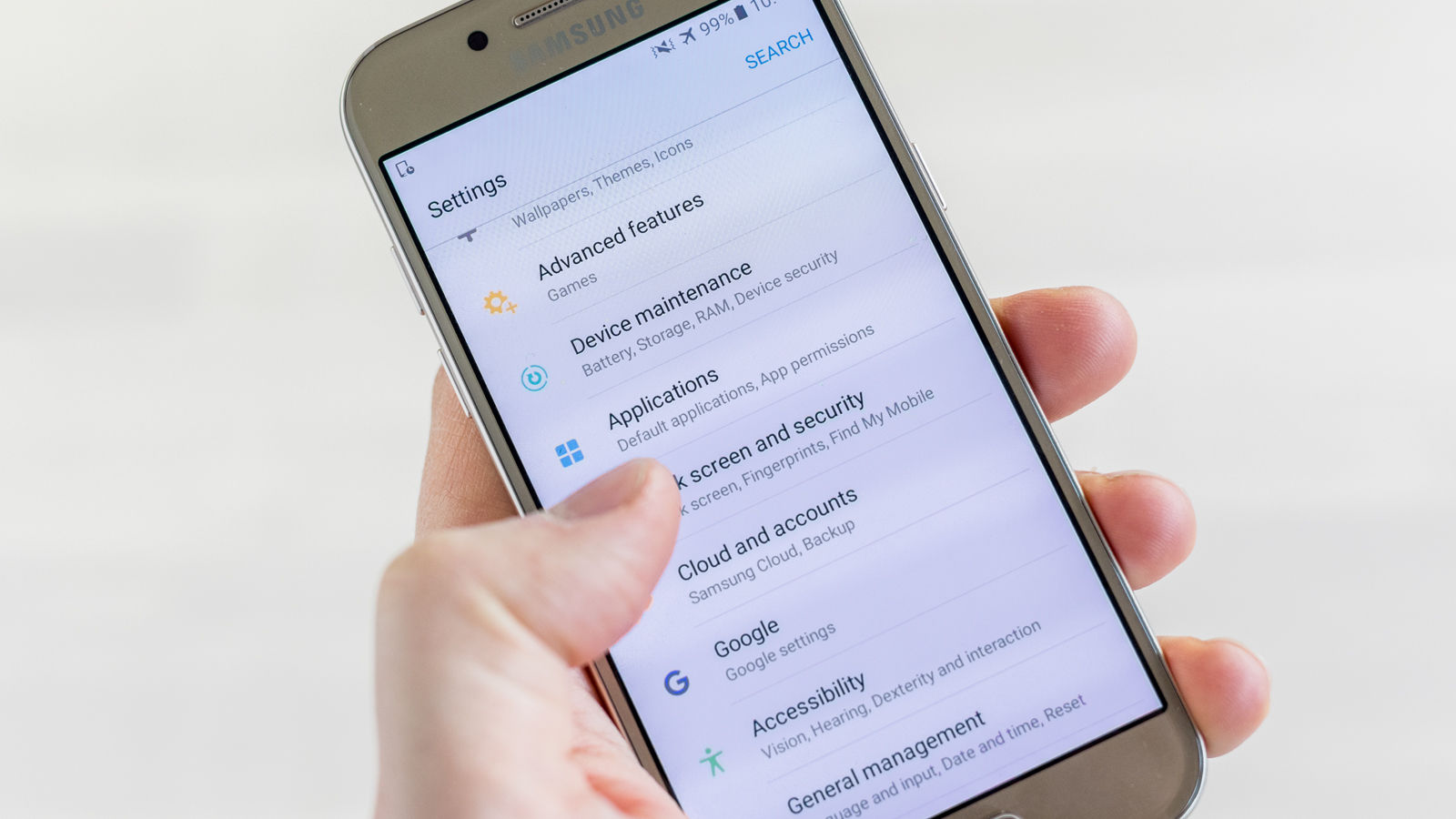 Beneath that screen is the tech that powers the A3, including its 1.6GHz Exynos 7870 Octa-core processor. That’s an improvement over the 1.5GHz Exynos 7578 quad-core processor in last year’s model and is paired with 2GB RAM over 1.5GB too.

We found the phone to be responsive and speedy even when opening apps including the camera, but we know from experience with previous A series phones from Samsung and other phones with mid-range processors that it’ll likely slow down a bit once you start eating through storage.

We put the A3 through its paces in our benchmark tests to find out how it compares with rivals. We found that it managed a score of 3297 in the multi-core Geekbench 4 performance test, which is similar to scores achieved by the likes of the Honor 6X. It’s much, much lower (and therefore slower and less powerful) than flagship rivals but that’s to be expected.

In the GFX graphic tests, the A3 scored similarly to its 2016 predecessor, with 19fps for the T-Rex onscreen test and 10fps for the Manhattan test. That’s again very similar to the Honor 6X.

There’s 16GB of internal storage in the A3, but there is now also the capacity to add up to 256GB thanks to the microSD card slot, which is an improvement over last year’s 128GB max. You’ll likely never need quite that much, but most users will want to add a microSD card of some size to the phone as you’re left with a lot less space once all of the preinstalled apps are taken into account.

When it comes to connectivity, the A3 now charges via USB-C like Samsung’s Note 7. USB-C will soon be the norm for all phones rather than the current MicroUSB, but it does mean there’s a slightly annoying transition period to deal with first as you’ll need to get used to the new cable and potentially new adapters for your accessories too.

The battery has increased in capacity slightly over its predecessor, now 2,350mAh rather than 2,300mAh. It’s still non-removable, but it does offer fast charging. We found that the battery would last more than a day on one charge. 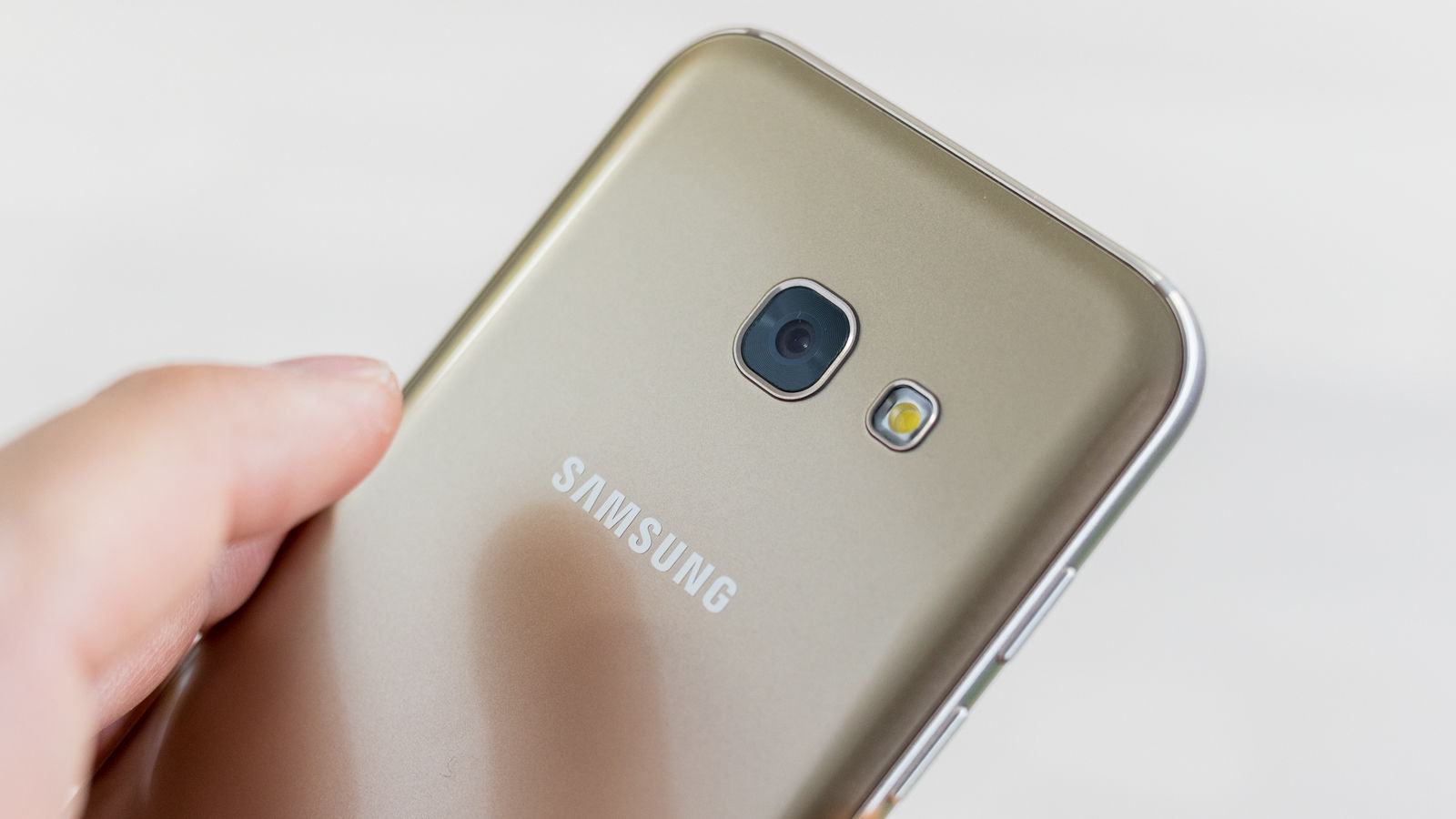 The Samsung Galaxy A3’s rear camera is still the 13Mp f/1.9 snapper with an LED flash that we got with last year’s model. There’s autofocus but still no optical image stabilisation, which means you’ll need to keep a steady hand to capture the best shots. 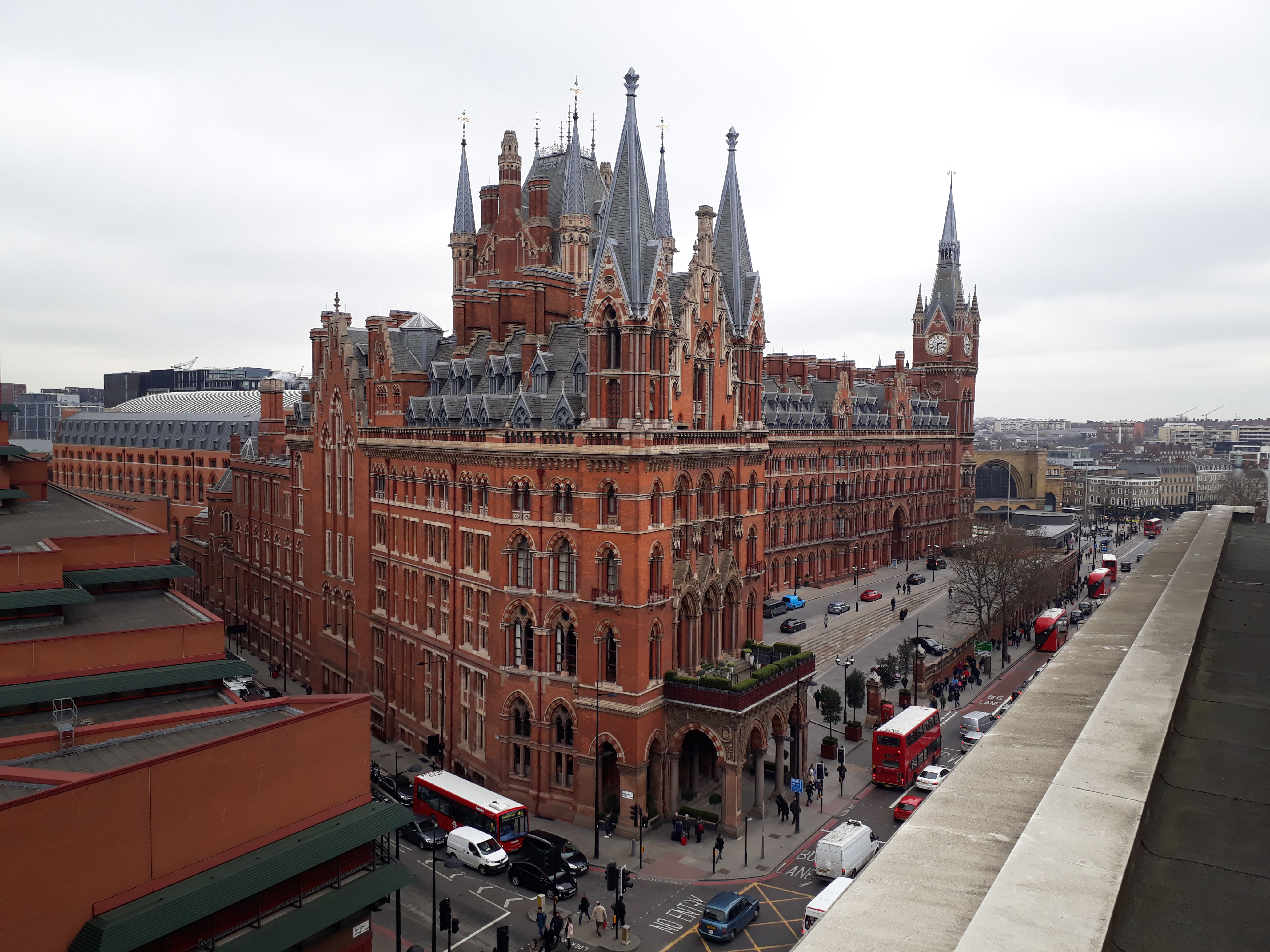 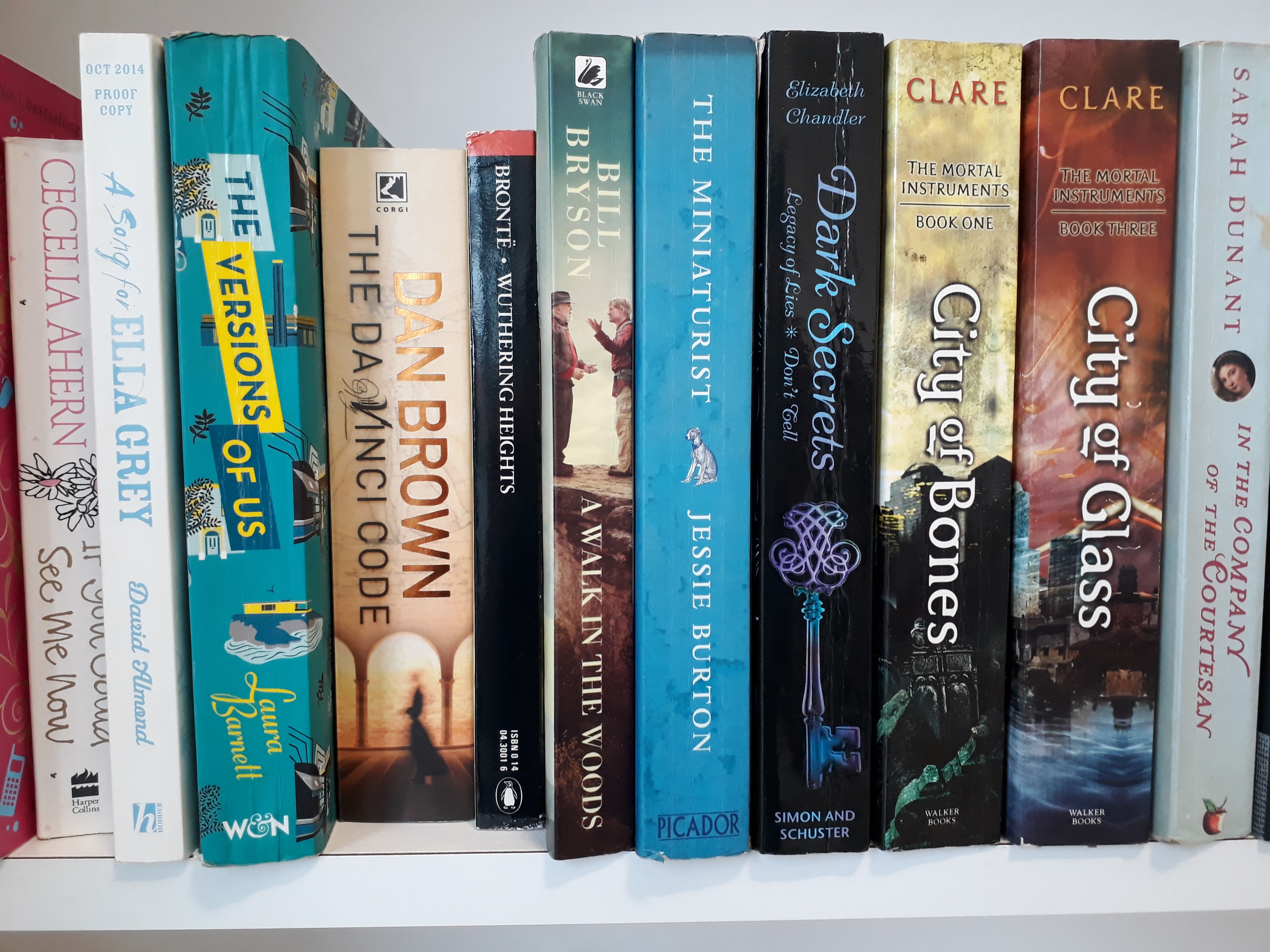 We weren’t blown away by the camera (take a look at some test shots above) and we found that we sometimes had to take two or three pictures to get a crisp shot, but overall they’re reasonably sharp and offer realistic colours. There are various shooting modes to choose from too, including Pro, Panorama, Continuous Shot, HDR, Night and more, as well as plenty of Instagram-like filters.

The major camera improvement goes to the front-facing camera, though, which is now 8Mp rather than 5Mp. 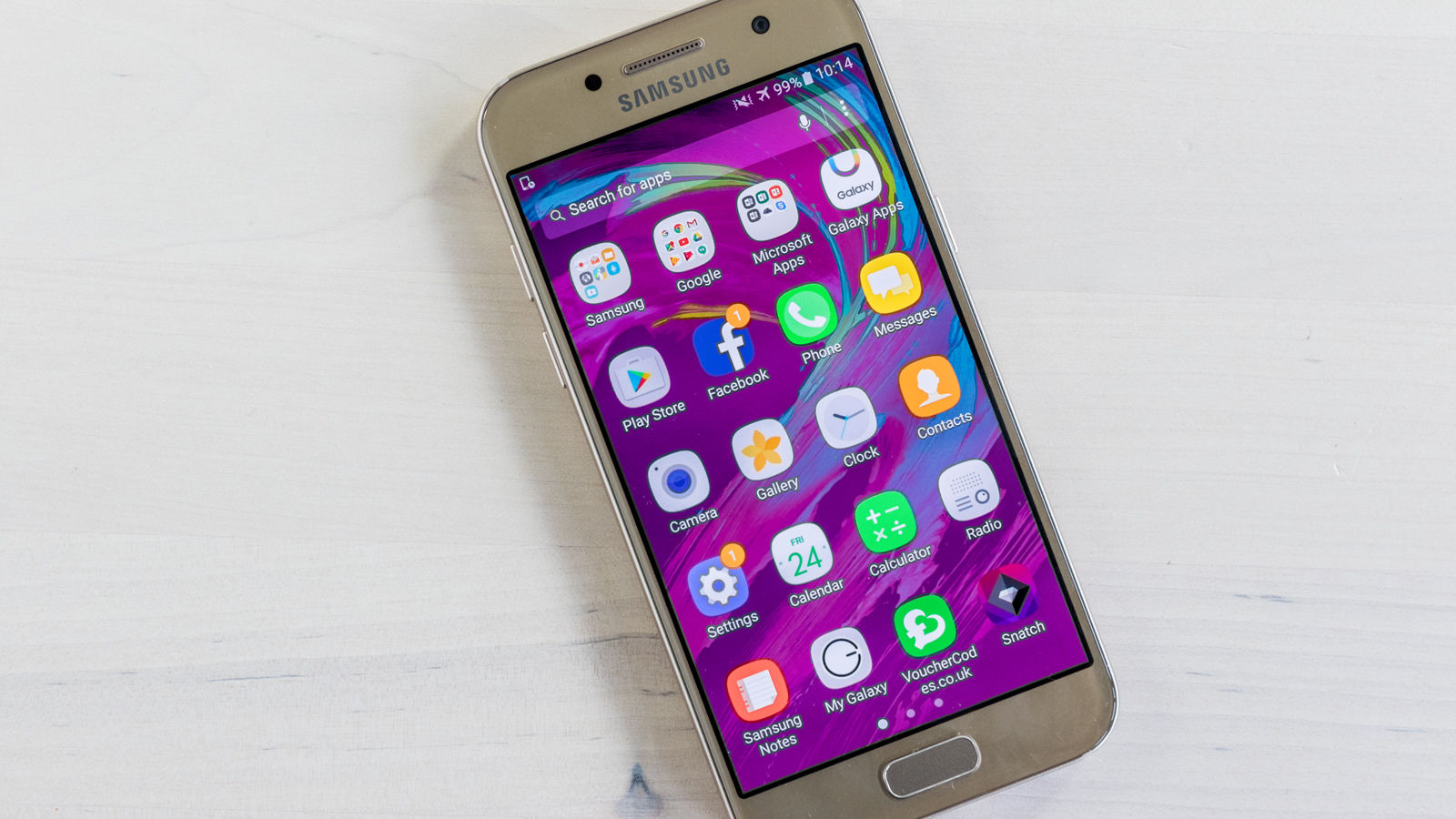 The A3 now offers Android 6.0.1 Marshmallow, with Samsung’s TouchWiz UI overlaid but nothing particularly notable and there are some features missing that you’ll find on Samsung’s flagship models like Multi-Window View, Pop-Up Window modes and more.

Taking a quick look at how the A3 compares to its bigger siblings now, you’ll find that there are some quite big differences although they do come at £100 a time. Take a look at the table below for more details.