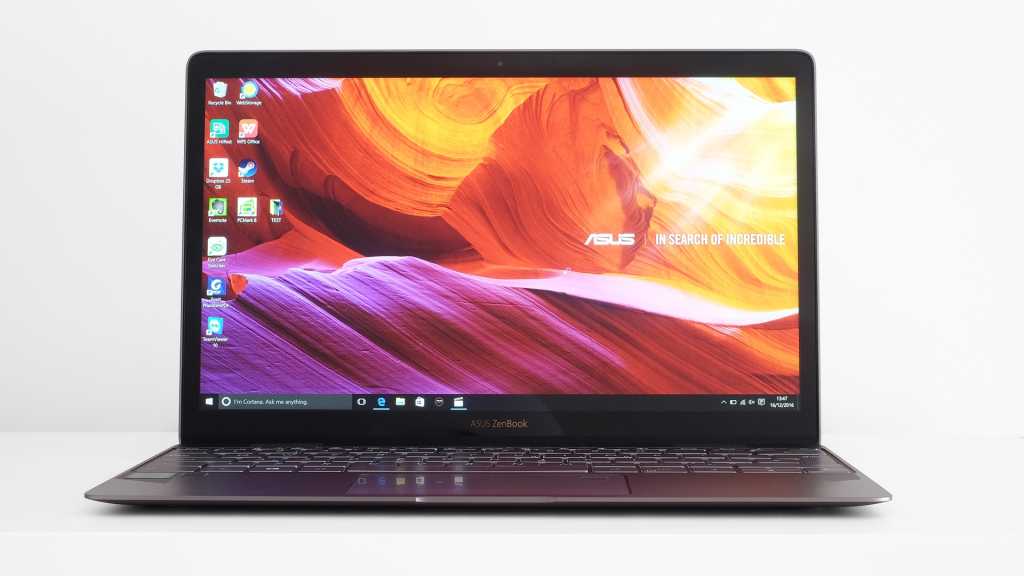 The Asus ZenBook 3 UX390UA is an extremely light laptop and one that doesn’t compromise performance or kill battery life as a result. It’s also more affordable than some of the alternatives, particularly in its entry-level spec. However, we’re not convinced about all the choices Asus has made. A single USB-C port won’t cut it for a lot of buyers, the ultra-slim keyboard isn’t great for long-form typing and the trackpad’s clicker mechanism has some real issues. The trackpad also seems a bit pointless when it’s reliability is mediocre, even if it’s down to Microsoft’s software. Its portability is just about unbeatable, but some of you may prefer the more accommodating style of the Dell XPS 13 or one of Asus’s cheaper ZenBook models

The Asus ZenBook 3 UX390UA is a top-tier ultraportable laptop. Asus makes dozens of more powerful machines, but if there’s one you’d find in a glass case, on a rotating pedestal, this is probably it.

Typical of the ZenBook range, it gets you more spec-per-pound than a lot of rivals. The Asus ZenBook 3 UX390UA is also incredibly thin and light, without compromising battery life.

However, in aiming for a new-design MacBook style, Asus has also used rather annoying a rather annoying keyboard and trackpad combo that make it less enjoyable for all-day working than some of Asus’s cheaper ZenBooks.

Asus loves to wave two fingers at Apple. In the last year or so we’ve often commented that some of its laptops showed-up the ageing MacBook Air models. This time, it’s all about mimicking the latest Apple designs, but at a much lower price.

The ZenBook UX390UA starts at £1099. That’s not cheap, but the comparable MacBook Pro would cost you almost £600 more. That is not the version with the new OLED touch panel either.

What’s quite remarkable at this price is that Asus includes a 512GB SSD. Even Windows alternatives tend to include 256GB, with the 512GB drive an expensive upgrade.

This £1099 version has 8GB RAM and an Intel Core i5 processor. There’s also a more expensive option, which we’re reviewing here, with an Intel Core i7 and 16GB RAM. However, at £1499 this version isn’t as compelling. However, most of our observations will apply to both versions, especially with a design-led machine like this.

The Asus ZenBook 3 UX390UA is the sort of laptop that’ll elicit oohs and aahs from everyone who picks it up: it’s incredibly slim and light.

You may have read this a dozen times in other slim laptop reviews, but not all alternatives have the same instant impression of slightness. Take the Dell XPS 13, for example. It’s slim and light, but it actually comes across as small and solid rather than svelte.

Asus has tried pretty hard to nail the “svelte” factor, largely by mimicking the style of Apple’s MacBooks. It’s all-aluminium, tapers down to a fine edge at the front and uses slimline rubber pads on the bottom rather than the thick (but practical) ridges found on a Dell XPS 13.

You pay for this design in the Asus ZenBook 3 UX390UA’s connectivity. It has just one USB-C port, also used for power, and a headphone jack.

There’s no getting around this: it’s terrible connectivity. There’s no memory card slot, no full-size USB, no dedicated video output.

Only the 12-inch MacBook has connections this uncompromisingly compromised. It makes you wonder why there’s even a “power user” Core i7, 16GB RAM version of this machine, when you’d imagine that sort of buyer might want to plug-in some accessories.

To do this, you need a USB-C dock. There Asus own Universal dock’, but you can use a third-party dock such as Targus’ Dock410, reviewed. Both plug into the USB-C port and add many more connections. The Asus version includes two USB 3.0s, a USB-C, an SD card slot, Ethernet, VGA and HDMI. Both will also power the ZenBook 3.

Asus’ dock costs $179 (£144 before tax, around £172 after) and is another thing to carry around unless you’ll only need connections for home or office use.

Asus has also messed with its usual keyboard and trackpad style, and not with great results. The Asus ZenBook 3 UX390UA’s keys are very shallow, and the pad click subtle, almost to the point of non-existence.

Once again, it’s an Apple emulation. However, where Apple tries to make up for the ultra-low key travel with a clicky feel, the Asus ZenBook 3 UX390UA has a more conventional key response. We have issues with Apple’s style, but this particular take on it just doesn’t work very well. Typing feels a little too vague.

Of course, this is something you will get used to even if you don’t like it. Most of the keys are of a good size too, with side buttons like Shift and Ctrl given plenty of space.

The Asus ZenBook 3 UX390UA keyboard has a backlight too, one with three brightness levels. It’s nothing like the amazing Razer Blade Stealth backlight, but it does the job.

The trackpad is the part we find harder to live with. It’s too spongy and vague, and a lot of the time the main click feedback actually fires off as you lift your finger rather than at the bottom of a press: very odd. The textured glass surface is perfect, and the clicker near-silent, but for pure practicality we’d prefer one of Asus’s less try-hard pads. There’s also a fingerprint scanner, the darker grey square to the top-right of the pad.

This is used as part of Windows Hello, which lets you login and avoid having to type-in your password in the Windows store. In use, though, it’s currently much less reliable than the now-excellent finger scanners used in phones. Too often it doesn’t recognise a fingerprint, or takes a second/third attempt to successfully log you in.

You might expect the highest-spec screen of any Asus ZenBook in the UX390UA, but it’s actually relatively conservative. There’s no touchscreen and resolution is only full-HD (1920 x 1080 pixels). Get close to the screen and you can see some pixellation.

Colour performance is good rather than fantastic. It covers 85 percent of the sRGB colour standard, 62 percent of Adobe RGB and 67 percent of DCI P3, the cinema standard.

This is enough to make the UX390UA look punchy and vivid, but we’d like to see it hit 100 per cent sRGB coverage at this price.

If you don’t need full colour coverage for professional purposes, the screen looks good, though. A lot of this is down to the very good contrast ratio of 999:1, which has a big impact on how lively colours appear.

Top brightness is excellent too at 370cd/m. While the UX390UA has a glossy screen rather than a matt one like some of Asus’s cheaper ZenBooks, you’ll be able to use the laptop outdoors. The top layer of the screen is Gorilla Glass 4, so should be pretty safe from scratches unless you really treat particularly roughly.

Our version of the ZenBook 3 UX390UA has an Intel Core i7-7500U CPU, one of the higher-end dual-core models from Intels latest Kaby Lake range. While a high-efficiency CPU, it’s not the sort of ultra-low power Core M model we might have expected in a laptop this thin a year ago.

There are no obvious performance trade-offs in real-world performance either. The UX390UA scores an excellent 2899 in PC Mark 8. In Geekbench 4 it scores 8113 points, 4155 per core. Both these scores are better than those of the Dell XPS 13 and Razer Blade Stealth reviewed recently, even though they use same CPU.

The difference is large enough not to be simply a ‘lucky run’ blip too. This machine has faster RAM than those, which may have a hand in this.

Bear in mind, though, we’re using the £1500-ish version of the laptop rather than the £1099 version you might be considering. For any kind of light ‘everyday’ uses there won’t be a great difference between the Core i5 and Core i7 versions.

Don’t expect to play new games with the Asus ZenBook 3 UX390UA, though. It uses the integrated Intel HD 620 GPU, which can only handle older titles. Alien: Isolation averages 24fps at 720p, minimum graphics, and Thief a fairly dismal 15.2fps, dropping to 6.2fps at 1080p. Stick to older or causal games.

Other that the CPU, the big difference between the two models is that the pricier model has 16GB RAM. That’s an awful lot for an ultraportable.

We’re also fairly impressed with how the ZenBook 3 handles heat. A laptop this small with a Core i7 isn’t going to be able to rely on pure passive cooling, but its fans are not annoying.

Their revs scale up and down smoothly, and while they are reasonably high-pitch, there’s no irritating whine here. Fan noise was one of the issues with the comparable Razer Blade Stealth. It’s not an issue here.

Asus has also put extra work into the speakers in partnership with Harman Kardon. Previous Asus laptops have used branded speakers like these, but the Asus ZenBook 3 UX390UA has a quad-driver array that provides real benefits.

There are two drivers above the keyboard and two on the underside. The ones above the keyboard are bassier, and the Asus ZenBook 3 UX390UA manages to make kick drums sound punchier than most slim laptops. Unlike some giant gaming laptops, the sound isn’t muggy-sounding either.

This is one Apple-chasing approach we can get on-board with.

Finishing off with one of the most important elements, the Asus ZenBook 3 UX390UA has a 40Wh battery. That’s a lot smaller than the 60Wh unit of the Dell XPS 13, but longevity is still reasonably good.

Playing a 720p video on loop at 120cd/m brightness (42 per cent of max), the Asus ZenBook 3 UX390UA lasts for six hours 55 minutes. Asus’s own claim is that it lasts up to nine hours, which you may be able to achieve by further dimming the display.

There’s a sacrifice here compared to the longest-lasting slim laptops in this class — the Dell XPS 13 lasts for an excellent 12.5 hours in the same test — but the Asus ZenBook 3 UX390UA will still get you most of the way through a day’s work.

As noted before, you use the USB-C port to charge the battery, and it’s fairly quick to recharge too. Asus says it will reach 60 percent in 49 minutes.