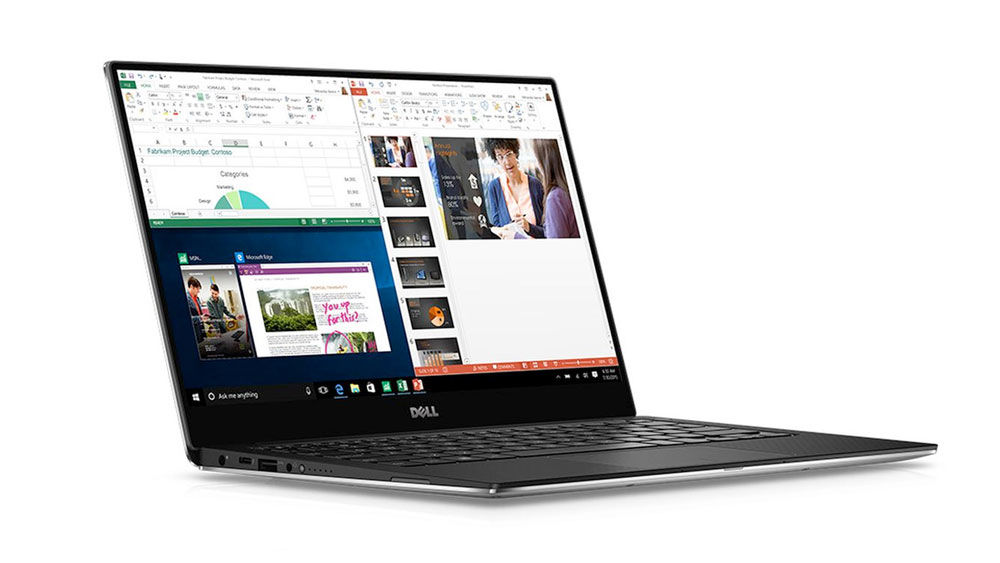 The Dell XPS 13 is an excellent ultraportable laptop, the best 13-inch Windows model going for many. Dell hasn’t aimed for a single superlative feature, a potential gimmick. Its footprint is smaller than the competition, but it’s thicker. Its screen resolution is excellent, but display colour is normal rather than super-saturated. There’s also a mix of old and new connections, and a combo of a large battery and smart power management means the Dell XPS 13 lasts significantly longer than most a lot of the time. The balance is just right – we’d spend our own money on it.

Dell’s XPS 13 has been around for years, but this is the latest model with a seventh-gen Intel Core i7 chip. Its battery life is great and you won’t need a load of adapters just to plug in a mouse and an SD card as you will with a MacBook Pro. Plus, its InfinityEdge screen makes the footprint closer to that of a 12in laptop. The Dell XPS 13 doesn’t come cheap, but it’s hard to beat.

However, shop around and there are load of other options. The lowest-end version costs £999 from Dell, and has a 128GB SSD instead of a 256GB one.

Note that the images we’ve used are a mixture of the standard silver version and the single new Rose Gold model, which costs £1349.

The Dell XPS 13 is an odd mixture of the incredible and the downright ordinary. Its most remarkable element is something that was already present last year, the InfinityEdge screen.

This fills out the surround, leaving just a few millimetres’ gap instead of an inch or so. In a computer monitor this could be called showing off, but in a laptop it’s practical. The screen surround means less wasted space, letting Dell make the XPS 13’s frame unusually small for a machine with a 13.3-inch screen.

Its footprint is much smaller than a MacBook Pro 13 or HP Spectre, closer to the size of the 12.5-inch Razer Blade Stealth.

The Dell XPS 13 is actually smaller than it seems in person, though, because this laptop doesn’t aim for pure looks over the practicalities. For example, there are chunky strips of rubber on the bottom to avoid heat vent blockage and increase stability, where other laptop makers would trade these in for a cleaner look. As a result it’s 15mm thick: slim but not incredibly so.

Similarly, the inside is a soft carbon fibre composite rather than aluminium and this is one of the few new top-end style laptops that doesn’t try to replicate the MacBook-like hinge where you don’t have to hold the base in place to open the lid. Instead, it seems Dell has prioritised hinge strength.

This is one of the few top-end small laptops that still feels like a road warrior. Let’s not paint it as too much of a gnarled old Mad Max extra, though. It’s a fine-looking laptop.

It is lighter than we initially assumed too, at 1.29kg (the non-touch version is 1.2kg).

The XPS 13 also has what we think of as the perfect connectivity strategy, for now. There are two standard USB 3.0 ports and a single USB-C Thunderbolt 3, the connector the HP Spectre uses throughout, for a mix of ‘old’ and new.

In a couple of years you might wish it had two USB-Cs, but with Thunderbolt 3 bandwidth of 40Gbps, even a single one is pretty powerful.

There is also a full-size SD card slot, which is becoming a rarity in style laptops — baffling to us as we use one most days. You miss out on a dedicated video output, but the Thunderbolt port can be used like a HDMI with the right cable.

One side effect of making the Dell XPS 13 as small as possible is that fitting in a truly gigantic trackpad was not possible. However, we’re perfectly happy with the keyboard and pad here in most respects.

The trackpad is made of textured glass, and while there’s a 50-50 left-right split to the button layout rather than relegating the right button to the right third to avoid accidental presses, we didn’t have any issues thanks to the Dell XPS 13’s smaller-than-average size.

Its keyboard is good too. It’s full-size, the keys are well-spaced and have well-defined travel rather than the ultra-slim style starting to become popular among very slim and light models. As with the connectivity, Dell seems to have made a concerted decision to keep certain traditional elements that long-standing laptop users like. It’s the opposite of Apple’s “change for the sake of it” approach.

The Dell XPS 13 is backlit, as you’d expect at the price. Some may not like that Dell has relegated the Page Up/Down keys to secondary functions rather than giving them their own keys, though.

There are two different screen specs for the Dell XPS 13, but both have the most important elements. All have the InfinityEdge design, leaving only a tiny bit of spare space between the display and laptop’s edge, and all use IPS-type LCD panels.

Dell sent us the higher-end QHD+ version, which has a 3200 x 1800 pixel display. That’s closer to 4K than it is 1080p, the resolution of the slightly cheaper version.

It’s extremely sharp. We’d be happy to use a 1080p 13.3in laptop day-to-day, but we’re not going to pretend you have to be a real screen snob to notice the difference.

We get the impression Dell has chosen a higher-end display panel that doesn’t add a ridiculous amount to the cost, though. There’s a £130 gap between the two models.

Screen quality is very good, but our colorimeter shows colour coverage isn’t quite as good as something like the MacBook Pro or super-saturated Razer Blade Stealth. The Dell XPS 13 hits 95 percent of sRGB, 75.4 of DCI P3 and 70.9 of Adobe RGB.

What this means is the Dell XPS 13 is a normal colour gamut display rather than a wide gamut one. Ideally we’d like it to nudge just a few per cent closer to full sRGB coverage, but just looking at the display we’re still very happy with the quality.

Colours appear punchy enough, and the contrast has a hand in this. The Dell XPS 13’s contrast ratio is up to 935:1 depending on screen brightness, a very solid result.

Top brightness is very good too, maxing out at 345cd/m2. This is bright enough to make the Dell XPS 13 usable outdoors even though it has a glossy screen.

One final difference between the 1080p and QHD+ Dell XPS versions is that this one has a touchscreen. It adds a fistful of grammes to the weight (not so much you’d notice, mind) but there’s no other obvious sacrifice. Both have a glass top and glare-reducing layer. There may be a slight difference in battery stamina, but as we’ve only tested this model we can’t comment on that. We’ll cover battery life later.

The main difference between this Dell XPS 13 and last year’s model is that this one uses Intel’s new Kaby Lake CPUs. You have a choice of Intel Core i5-7200U and i7-7500U chipsets, and our review machine has the higher-end Core i7, along with 16GB RAM and a 512GB SSD.

If you’re just looking for a machine to use for general light computing work, there’s little reason to buy the higher-end model. And if every little bit of performance matters, you should really consider whether a non-portable quad-core CPU laptop. The Intel Core i7 here is a dual-core chipset.

There’s also little difference in their gaming abilities: neither is much cop.

We’re not being down on the Dell XPS 13, it’s just wise to know that paying over £1000 on a laptop doesn’t get you everything. The CPU performance is much lesser than a good desktop or quad-core laptop CPU.

Public service disclaimer out of the way, we’re very happy with the Dell XPS 13’s performance. It’s quick to respond thanks to the snappy 256GB SSD, and the Intel Core i7-7500U is really overkill for our day-to-day needs.

Right now it’s about as powerful a machine as you’ll get in this small a frame, scoring 7993 in Geekbench 4 and 2499 in PC Mark 8 (Home). These are actually slightly higher than the results of the similarly-specced Razer Blade Stealth.

More important than a slight benchmark bump, the Dell XPS 13 runs quiet unless it’s under continued pressure. We flat-out enjoyed using it as our everyday work machine.

However, it’s (relatively) poor for gaming, just like every laptop in this class. The Dell XPS 13 uses the bog-standard Intel HD 620 integrated GPU, not even the slightly more powerful Iris type MacBooks use.

Don’t expect to play recent console-grade games on the XPS 13. At 720p with all the graphics options turned down, Thief plays at a barely-playable 20.7fps, dropping to 6.2fps at 1080p, high settings. At native resolution it’d be painful even to look at, let alone play.

Alien: Isolation fares a bit better, managing a just-about bearable 32fps average at 720p, low graphics. Few would put up with the 14fps 1080p performance, though.

Of course, if you have a Steam library packed with games from the “late noughties” and “early tens” you still mean to play, the Dell XPS will be able to handle most of them just fine.

The Dell XPS 13 isn’t really made for gaming but it is made for battery life. Left to play a 720p video on loop it lasts for almost exactly 12.5 hours, a pretty amazing result.

It has a 60Wh battery, which is a higher capacity than both last year’s model and most of the Dell XPS 13’s rivals. The HP Spectre has a 38Wh battery, for example.

Part of this great stamina is down to Dell’s clever power management, though, which simply seems better than that of most of the competition at the moment. All this means is that you can expect the longevity to scale quite closely with your usage. Dell’s optimisations are smart, but they’re not magic.

The Dell XPS 13’s speakers are also solid, if not quite as impressive as the battery. It uses stereo drivers that sit to each side of the laptop’s underside.

They’re pretty loud, but don’t have quite the weight or composure of a MacBook Pro at top volume. No Windows laptops we’ve reviewed recently does.