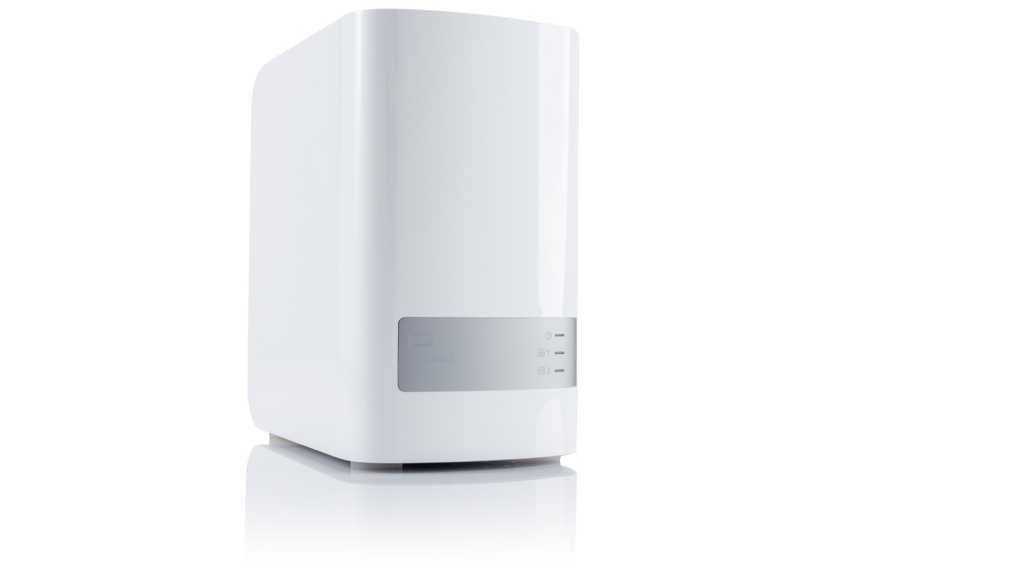 When it comes to ease of use the WE My Cloud Mirror is hard to beat. Initial setup is very easy and even sorting our remote access is simple too. For sharing music, movies, photos and documents it works a treat and performance is fine. The downside is that you don’t get the huge range of apps that are available for other brands. However, if you prioritise ease of set up and ease of use the WD is worth looking at and with 4 TB of storage included for the price, it’s a great value option.

While many NAS drives, with their need for installing disks and using screwdrivers, have a rather techly feel about them, the WD My Cloud Mirror range is clearly aimed at the consumer. It’s a very compact unit with a pleasingly space age looking shell with curves rather than the harsh angular lines of most NAS. It looks more like WALL-E’s futuristic friend EVE, rather than well, WALL-E. Also see: Best NAS drives

It does however have quite a plastic feel to it and is less sturdy as other units we’ve tested. It’s a two-bay model and this 4TB models comes pre-populated with two 2TB disks preconfigured as RAID 1, so you get 1.96 TB of usable storage capacity, which doesn’t seem that much for a NAS these days. You can buy one with 16 TB, but that versions costs over £750. The 6 TB version could be the better value option. You can buy this 4TB version at Amazon.

If a drive does fail, or if you wanted upgrade you can access them simply just by popping the lid off on the top.

At the rear, there are two USB 3.0 ports and a simply Gigabit Ethernet port. Make sure your router and your computer have Gigabit Ethernet if you want to ensure you get the maximum speeds you can. There’s also a cable lock port for physically securing the drive and a reset button.

Set up was straightforward. You type ‘http://wdmycloud’ into your browser and from there you create a login password and an account for remote access. With no need to install disks or build the RAID you are up and running very quickly.

The main UI has a rather simplistic look to it but is designed to be easy to use. The remaining capacity is presented in very large numbers and the range of functions is spread across the top. You still need to click small arrows to view all the options at the top though. This includes the Apps button from where you can install third-party apps by clicking the icons below the list of pre-installed apps. Of these the P2P downloads app was the only one of interest.

Oddly, when I first selected the list it appeared blank, and I had to reboot the device to solve this. Compared to the huge number of options you find from the likes of Synology and QNAP the choices are limited but you will find essential such as a Plex Media Server and even Dropbox, so you can sync all your files between the web and the drive without having to take up space on your main computer. Standard DLNA is also supported as is an iTunes server.

Remote access is possible via a dedicated app. You just sign into your My Cloud account and you can access your drives content. As the iPhone doesn’t natively support test files the app could not stream the videos direct to my phone. Instead I downloaded the whole file and from there could lunch it to my app of choice to play the file.

From the UI you can easily create new users and extra shared folders and perform backups to another external device. What we really appreciated was that the WD was quiet in operation, hovering around 50db. See all NAS drive reviews

Testing video file playback via PS4 client, Plex worked as advertised, playing our H.264 MKV tests files and an MP4, but it could not transcode our test H.265 encoded files. However, these did stream the files flawlessly to an iPhone 7 Plus and the AV Player app, which handling the decoding without any issues.

In our tests we were more than satisfied with the speeds we say, hitting a read speed of 107MB/s and 115.8 MB/s with the Crystal Disk Mark, nearly the limit of the Gigabit Ethernet link. Files copied from a USB key to the drive at a peak of 11.1 MB/s. See all storage reviews