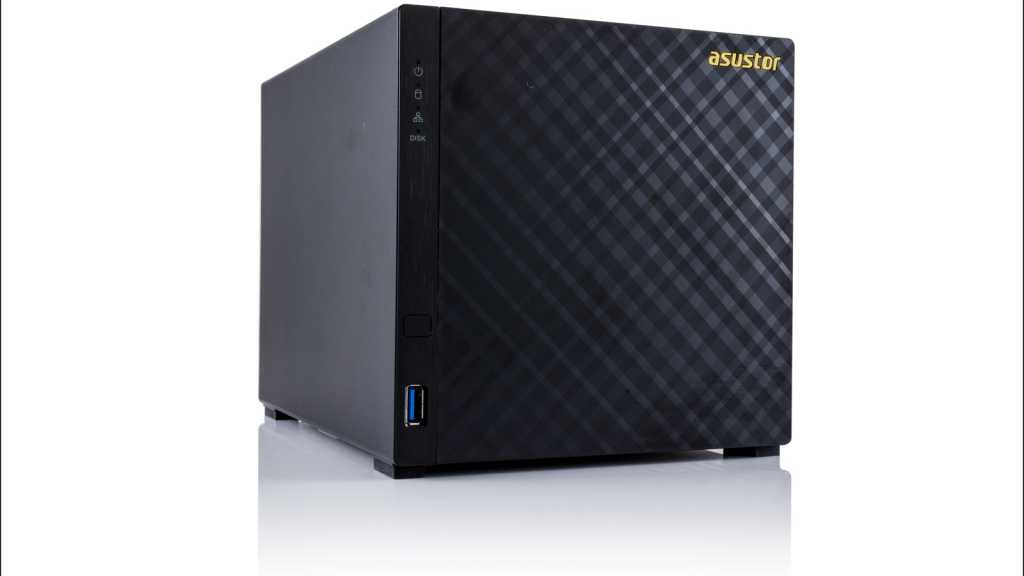 We like the Asustor AS1004T for its ease of installation, it’s relatively quiet operation in normal use and its decent performance. It isn’t fast enough for hardware transcoding though, so you’ll need native support for all your files on all your client devices. Where it trumps the completion is that it offers a four-bay chassis where some offer only two. If storage rather than performance is the priority then, it’s a great choice and while the ADM interface isn’t as accomplished looking as some of its rivals it’s got the apps you’ll likely need.

Storage is a big deal these days with most people storing much of their movies, music, photos and documents in digital form. As such, Asus has created a brand especially to cater for this market in the form of Asustor. Also see: Best NAS drives

The Asustor AS1004T is a four-bay NAS drive compatible with disks up to 10 TB in size, enabling you to have up to 40 TB of capacity available for your household, which should be enough for anybody.

We were sent one without disks supplied, and this chassis-only form costs around £250, or even less if you look around online. We found it at Amazon for just £229.

Removing it from the box we were impressed with the sharp angular design and patterned black finish. We think this gives it a modicum of style so it won’t stick out like a sore thumb if its visible in the home.

It’s also pretty quiet in operation, rated at just 19.7dB. This is due to the use of a large 70mm fan, which helps it be a room friendly device. That said, when a Time Machine backup was in progress and the drives were whirring away inside we measured it peaking at a rather louder 71dB. Don’t backup while watching a quiet movie would be our tip unless you equip it with SSDs.

We also liked the tool-less installation. Thumbscrews are used both to remove the cover and to install the disks inside, so you can get it up and running without needing to a screwdriver. To initialize, the drive requires installing the Control Center software, and we were slightly bemused to see that the software was supplied on a CD. This was of little use to us as the laptop we used for testing was bought in the 21st century so didn’t have an optical drive.

The quick start guide told us to go online if we couldn’t use a disk, but we were rather stumped when the web page to download the software only produced a broken link. We had to resort to a search engine to find the file we needed.

Once we downloaded this, installation proved straightforward, with the software detecting the drive and launching the install process. However, if you are using fewer than four disks, make sure you start by installing the first disk in the first bay otherwise the disks will not be detected. We didn’t do this at first (nor did we read the manual) and had to open up the NAS and reinstall the disks. See all NAS drive reviews

With disks correctly in place, we were given the choice between using the full capacity of both disks or going for RAID 1, giving us backup protection for our data should one drive fail. We went for the latter. Note you can’t hot swap the drives, should you need to replace or install a new one, so there will be downtime to do either.

Logging into the AS1004T for the first time and you’re presented with a grid of basic looking icons arranged in a grid. It’s not as sophisticated looking as what you’ll find from Synology or QNAP, but in terms of available apps you won’t feel shortchanged.

The App Center provides access to a wide range of applications – though you will need to register for an account first before you can gain access.

Staples such as an app for downloading P2P files and photo browsing are all available, but it’s also possible to find apps for business functions such as database management, using it to host a WordPress website, or running virtualised OSs. You can even plug in security cameras too.

It’s also straightforward to configure rights access for different users and create shared folders and Mac users will appreciate being able to set up a Time Machine back up.

Multimedia-wise there are a number of mobile apps to accompany the drive such as the AIVideo app for iOS. The Marvell processor lets us play back an H.265 encoded MKV files on an iPhone 7 Plus flawlessly. However, the same file was not recognised over DLNA using our favourite AVPlayer app for iOS. Our other test files played without issue however. See all storage reviews

With a Marvell rather than Intel processor and only 512MB of RAM, some may have doubts about the performance of the Asustor, but it delivered for us while we tested. Playback of files over the network and via PS4 was responsive. However, there’s not enough grunt for hardware transcoding on the fly, which meant that there was no way we could play back our H.265 test file.

In terms of write performance we saw a decent 110MB/s using the CrystalDiskMark test for maximizing the throughput of a single Ethernet connection. Read speeds meanwhile only peaked at 82.2 MB/s, slower than other NAS drive, which can break 100 MB/s.