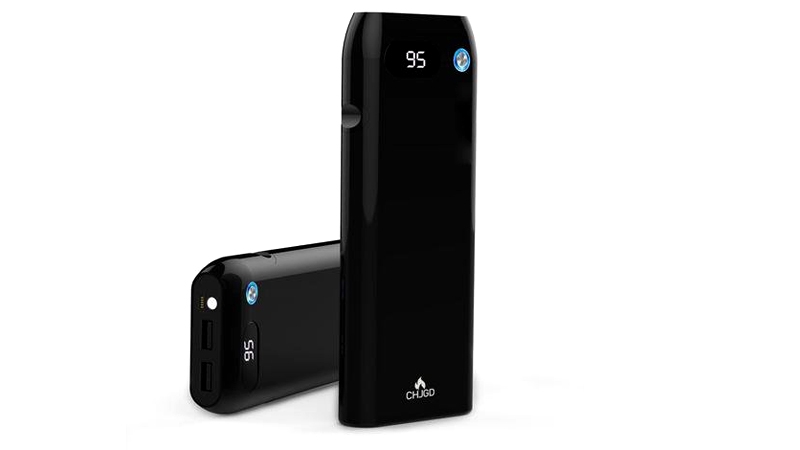 If you need a lot of power, the Magnum Opus is an excellent power bank: fast, high in capacity, affordable and with an LCD screen. Even despite its bulk and lack of passthrough charging, the CHJGD is easy to recommend.

CHJGD makes some of the coolest power banks we’ve seen, but they’re more than just good-looking. In common with the other banks in its store the Magnum Opus is a fast-charging power bank with Quick Charge 3.0 support on both the input and output, but it also boasts an LCD screen and a high 21,000mAh capacity. Also see: Best power banks

With all that in mind, it’s £29.99 asking price (via Amazon, or £39.99 via the chargedpower.com site) seems incredibly reasonable.

We’ve previously reviewed the much more compact Midas power bank and UltraCompact power bank, and this is something completely different. This battery really means business.

One of the things we like about CHJGD is its style, and not one of the power banks we’ve received from the company even closely resembles another. Power banks can be incredibly boring plastic slabs, but CHJGD is mixing things up in the market.

It’s fair to say this Magnum Opus is another black plastic slab, but it’s apparent that its design has been more carefully considered. With 21,000mAh of power inside you wouldn’t expect it to be anything other than big and heavy (and at 336g and 65x21x162mm it is certainly that), but a high-gloss black surface, rounded edges and its tapering at one end make this power bank less functional looking than most. On the left and right edges you’ll also find resting places for your thumb and index finger, making this slippery bank less likely to fall out your hands. Also see: How to charge your phone’s battery faster

Our favourite part, though, is the LCD screen. For devices that are all about ensuring you have enough power to last you through the day (or in this case several days), too many cheap power banks come with capacity indicators that are no more advanced than three or four LEDs. For low-capacity power banks from which you know you might only charge your phone once or twice that isn’t a major issue, but when you have enough power for multiple charges you need a more accurate representation of what’s inside. The Magnum Opus tells you the exact percentage of power left inside via the LCD screen, and this is not at all a common feature on power banks.

In the box you’ll find a soft carry case for protecting the shiny CHJGD from scrapes. It doesn’t feel fragile by any means, but we like the bag as a means to carry the also supplied Micro-USB cable. If your phone uses a Lightning- or USB-C cable then you will need to provide your own, which is to be expected. See all power bank reviews

Choosing which capacity power bank you need can be a difficult decision. The smallest power banks are easy to slip into a pocket, but you’ll be lucky to get a full charge. Put a high-capacity power bank such as this in your pocket and it will pull down your trousers. We usually tend to opt for something in the middle with between 6000- and 10,000mAh capacity, but there are certainly cases when you need more power to get you through.

With a 21,000mAh capacity the Magnum Opus is ideal for extended journeys away from home and mains power sources, or with its two outputs simply if you’ll be charging more than one device (perhaps a tablet as well as a phone). You should expect to see around 14,000mAh of usable power from this bank, which would charge any iPhone at least seven times and an Android phone perhaps four or five times.

What makes the Magnum Opus better than other power banks of this capacity is its support for Quick Charge 3.0 on both the input and one of the two outputs. Even if you don’t have a Quick Charge phone you can take advantage of the fast-charging tech for refuelling the power bank in less time. If only it also supported passthrough charging (the ability to charge itself and a connected device at once). Also see: How to improve smartphone battery life

The second USB output is rated at 10W and is still plenty fast for charging a phone or tablet. You can use either output with any phone or tablet, regardless of whether or not it supports Quick Charge – the device will draw only the power it requires.

The Magnum Opus supports auto-on, so most users won’t need to use the power button. However, a double-press of this button activates the meagre LED torch found at one end of the bank which, frankly, we’re surprised to find on a power bank from a company that is all about style. If you’re fiddling around trying to find your charging cable in the dark then it could come in useful, but don’t expect great things.