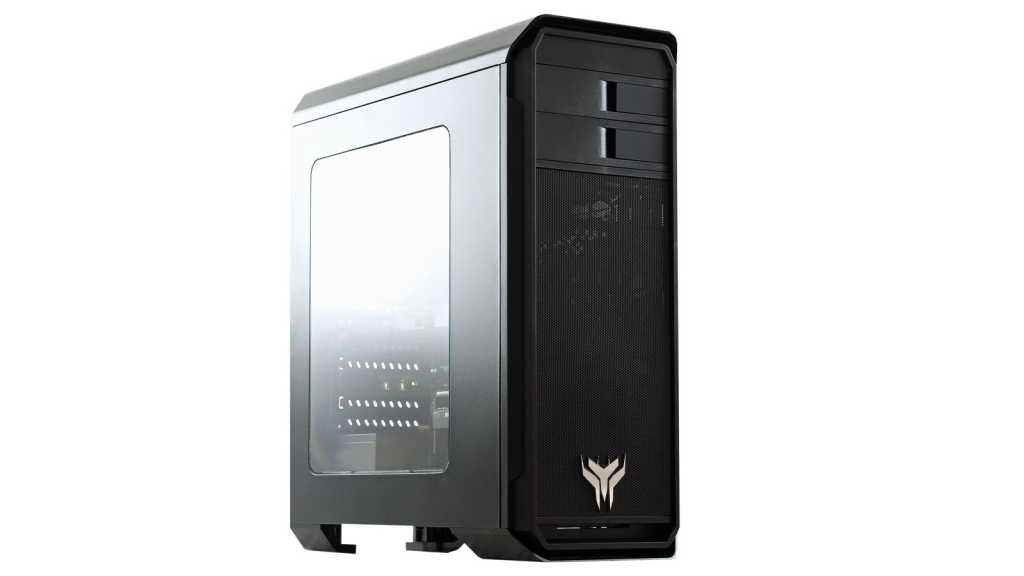 The YoyoTech Warbird RS10 V2 delivers high-performance gaming at a reasonable price. The lack of an SSD makes the system feel less responsive in general use, but there’s plenty of storage available for a large game library. Warranty terms could be more competitive at this price.

An MSI Z170-A PRO motherboard holds all the components together, its Intel Z170 Express chipset providing the unlocking feature which allows the quad-core CPU to be overclocked. It also provides automatic overclocking support and enhanced audio as well as support for twin graphics cards and high speed Turbo M.2, Turbo U.2 and SATA Express storage.

Unfortunately, you won’t be able to take advantage of the latter two features: First of all, because the GTX 1060 doesn’t support SLI mode for linking up a pair of cards and secondly, because the Warbird RS10 V2 doesn’t ship with any solid state storage as standard, relying instead on a much slower, although much more capacious, mechanical hard drive.

With a motherboard so equipped to handle the latest high-speed storage options it’s a great shame to see the Warbird RS10 V2 limited in this way, but at least there’s plenty of scope for upgrading the system later, and this system puts all the performance where gamers really need it, i.e. the graphics card and CPU. To add a decent SSD would certainly push it well above its £799 budget.

Yoyotech has selected the Aerocool Aero 500 as the system case for this PC. It’s a tall, roomy mid-tower chassis, with basic fittings but plenty of internal space. It also comes with tool free bays for easy access and a removable dust filter for the 500W power supply. A second dust filter sits on the top of the case in the form of a flexible mesh, held on rather loosely by magnetic strips. It does the job, but it also feels a little cheap.

The top of the case also includes a trio of USB ports, along with the standard audio connectors as well as power and reset buttons which, confusingly, aren’t immediately distinguishable from each other. This could lead to an accidental reset rather than a graceful shutdown if you’re not familiar with which is which. The top panel additionally includes two three-way switches for manual control of the internal fan speeds. The low setting keeps the system pleasantly quiet, while the high setting causes an audible whoosh of air and provides the most cooling.

The Warbird RS10 V2 makes good use of the GTX 1060 6GB graphics card, achieving decent, playable frame rates at high resolutions and ultra-high quality settings. Combined with the system’s overclocked Core i5-6600K processor, it performs very well in all of our gaming tests. Factory overclocked versions of the GTX 1060 will be able to eke out a few more frames per second that what we have here, but there’s always room for you to experiment with DIY overclocking if you’re that way inclined.

With the cooling fans on full blast, the Warbird RS10 V2 kept processor temperatures well under control. Even when running our harsh ‘torture tests’, no processor core exceeded 62 degrees C. The large Coolermaster Hyper 212 EVO will have played a large part in this result.

The only key area where performance suffers is in hard drive performance. PCMark 8 reports a storage score of only 2412 points – around half the speed of the fastest systems in this price category. This is because YoyoTech has chosen not to include a solid state drive (SSD), presumably as a cost-saving measure. So while you get plenty of room to store all your games, you’ll have to be rather more patient waiting for them to load. Once the games are up and running, there’s no performance penalty however. You may be happy to put up with this if you are buying this system pretty much exclusively for gaming, but if you also plan on using it for other tasks, especially photo or video editing, then you should really consider a system with an SSD or at least a Hybrid drive.

For a highly overclocked system such as this, we consider Yoyotech’s warranty terms to be a little behind some of the competition. Three years of cover are provided, but the system must be returned to base at the user’s cost and replacement parts are only covered for the first year. Several competitors cover parts for twice as long and some also offer a collect-and-return service.