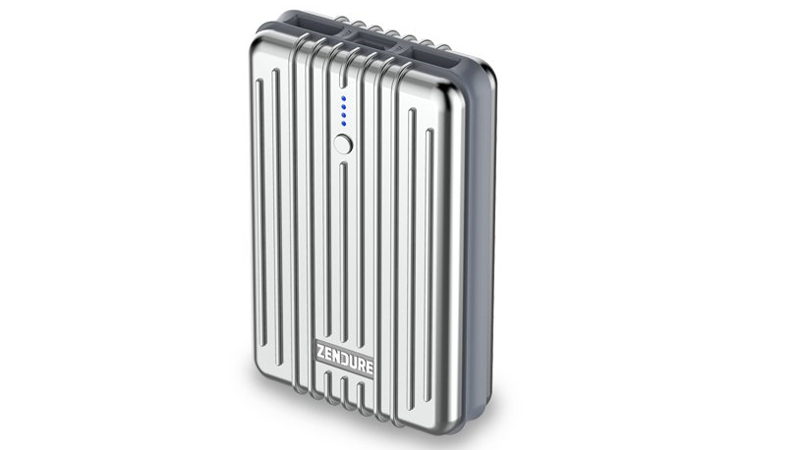 Higher in capacity than the class-leading Zendure A2, but with the same indestructable design and an extra USB output, the Zendure A3 is a great choice if you want a little more pocketable power for charging your phone and/or tablet away from home. If you need more power still check out the £40 Zendure A4, which is otherwise identical to this Zendure A3.

Zendure isn’t as well known as some power bank manufacturers, such as Anker, but they could learn a lot from how it does things. The A-series is by no means perfect, but it takes into account the features people need most and present them at a reasonable price. Also see: Best power banks

Zendure’s power banks differentiate themselves from others on the market in three key ways: with their cool-looking and virtually indestructable crushproof PC/ABS composite material with dual-injection molding and shock-absorbing central belt, with their much higher than industry standard efficiency rating of 80 percent, and finally with their long-term standby – you can pick up one of these banks six months after you threw it into a drawer and still find it as full as it was the day you last used it. Also see: How to charge your phone’s battery faster

The A3 reviewed here is a 10,000mAh model, which offers the perfect middle ground between pocketable power banks and high-capacity power banks that can charge your phone several times. Except in this case it is both, and its 96x62x24mm, 224g body is not going to cause much of a bulge in your pocket. Zendure has done a great job of cramming in so much capacity into such a small case, while keeping down the weight and size to a reasonable amount.

With an 80 percent energy efficiency, you should see 8,000mAh of power available for charging your devices. That translates to two- to three charges of an Android phone (depending on its battery capacity), and in excess of four charges for an iPhone. See all power bank reviews

When the battery is depleted it can be recharged in as little as six hours over its 1.5A (7.5W) Micro-USB port, and one of the neat things about this device is it supports passthrough charging, which means it will charge its own battery at the same time as any connected devices, without causing any harm to the hardware. If you have few spare electrical outlets handy this can be a lifesaver.

Where the 10,000mAh Zendure A3 differs from the A2 is in its capacity, obviously, but also the number of outputs. However, it’s worth pointing out that while you get an extra USB output here, the max total output isn’t any higher: the A3 can offer 2.1A (10.5W) from one USB output or shared between two. Nevertheless, not all the devices you plug in will want to draw the full charge available, and to aid in divvying up the power there’s Zen+. This is clever device-recognition technology that delivers the optimum charge, rather than firing out the full amount and leaving it to your device to take only what it requires. Also see: How to improve smartphone battery life

Operation is plug and play, so you simply plug in a USB cable and connect your mobile device to begin charging. The power button is used only to see how much power remains in the bank.

There are features this power bank doesn’t provide. For example, there’s no LCD screen, and no support for USB-C or Quick Charge 3.0. However, the four LEDs lined up above the power button do a reasonable job of inferring how much power remains in the bank (each represents 25 percent of the total capacity, so 2,500mAh), and USB-C and Quick Charge 3.0 are useful only for those with the most recent flagship phones. As it stands, the 10.5W output it does offer is fairly nippy.