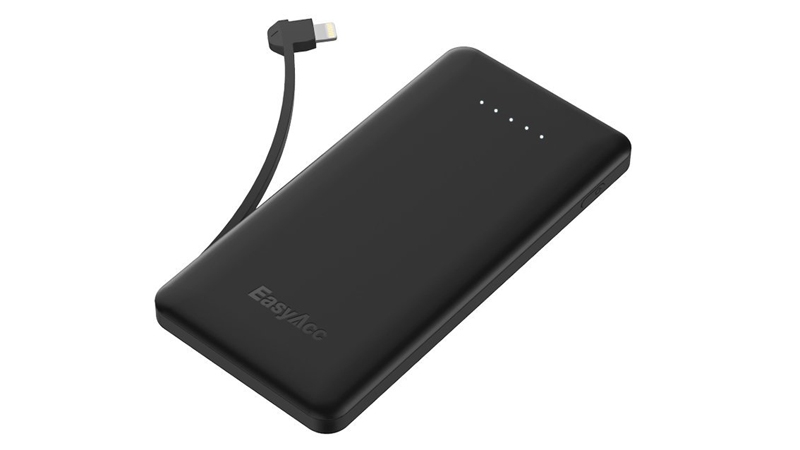 The EasyAcc 6000mAh Ultra-Slim is an affordable and appealing power bank with a handy built-in MFI-certified Lightning cable, but it’s suited only to iPhone users. Android users will find better value and faster charging elsewhere.

It’s always intrigued us why people would pay £19 at the Apple Store for an official Lightning cable with which to charge their iPhone. There are plenty of cheaper options and many of them MFi-certified, which means they will still work next time Apple updates iOS. But we think an all-round better solution is this EasyAcc 6000mAh Ultra-Slim Power Bank. Also see: Best power bank

It costs just £16.99 from Amazon UK ($22.99 from Amazon US), so you’ve already saved yourself £2.01 there, and it includes a MFi-certified Lightning cable for charging your iPhone. And while a standard Lightning cable is useful merely for transferring data and power from another source, this  power bank can provide at least two full charges for your iPhone wherever you may be. That’s plenty to keep your iPhone going as long as you do – longer, probably.

A Micro-USB cable is also provided for refilling the power bank once it’s empty, and you can plug this into your iPhone or iPad wall adaptor. It can accept up to 10W, which translates to a fairly speedy charging time of 3.5 hours, and we also found it will charge a connected device at the same time (though the charging process will naturally be longer). Note that if you are using a 5W iPhone charger to refill the power bank the charging time will be longer. Also see: How to charge your phone’s battery faster

So for iPhone users this power bank is ideal. For users of other mobile operating systems, less so. Android phones, for example, will typically have higher-capacity batteries that this power bank will refill only once. They also charge over a Micro-USB or USB-C rather than Lightning cable, either of which can be plugged into the EasyAcc’s full-size USB output. However, this output also operates at only 5W, which for an Android phone is incredibly slow. You can find much higher-capacity, much faster-charging power banks for your money.

(You might also like the Dodocool 5000mAh Power Bank, which has a similar setup but detachable Lightning and Micro-USB cables for iPhone and Android.)

We touched on the fact the EasyAcc appears to support passthrough charging above, though it is not expressly noted in the user guide. Some power bank manufacturers advise against passthrough charging, while others actively support it. The power bank also supports auto-on and auto-off, which means you can just plug in your phone and not worry about pressing any buttons to begin charging or removing cables once it is complete to avoid power wastage. See all power bank reviews

Another feature we like on the EasyAcc 6000mAh Ultra-Slim is the five LEDs used to indicate the remaining capacity. Nearly all budget power banks use four LEDs, and some of them just two (you’ll need to pay more if you want an LCD for an exact percentage readout of what remains). With five LEDs here each represents 20 percent of the total available capacity, and given that it’s a relatively low-capacity power bank at 6000mAh it shouldn’t be too difficult to work out exactly where you stand.

The EasyAcc is a fairly basic-looking device, a rectangular brick that’s slim but a touch wider and taller than the 4.7in iPhone. It has a grippy matte plastic casing, and becomes only slightly warm in use. We’re not  so keen on the pulltab that sticks out on one side for unhooking the cable, and a solution that can lie flush to the power bank would be preferable. Also see: How to improve smartphone battery life

An LED flashlight is provided at one end, activated with a double-press of the power button, which will be handy should you ever find yourself scrambling around for your phone’s charging connection in the dark.