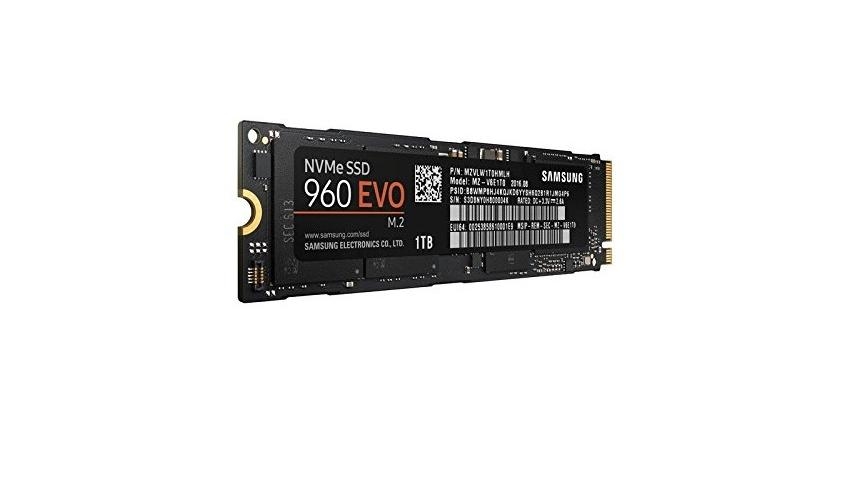 The Samsung 960 Evo M.2 provides ridiculously fast sequential read/write speeds, but is a little slower than the 960 Pro. However, it still offers extreme performance over a regular SATA III SSD and is more affordable than its Pro counterpart – making the 960 Evo a fantastic SSD for the pro-consumer.

Note that there is now a newer model: read our review of the 970 Evo.

NVMe SSDs are still new to the market and their adoption rate has been relatively slow, mainly due to motherboard chipsets very slowly adopting the extreme speeds capable from a storage device.

Despite its high price tag, the 960 Evo 1TB only comes with a three-year warranty and guarantees 200 TBW (terabytes written). The 960 Pro on the other hand, offers 400 TBW and a five-year warranty. Read next: Best portable hard drives 2016.

When connected to our Windows 10 test rig, the 960 Evo displayed 931GB of usable storage. This results in a high £0.43 per GB which is double the cost of regular SATA III SSDs, but is considerably cheaper than the £0.65 per GB 960 Pro. Read next: How to build a PC.

Prices change on a daily basis, but these were correct at the time of each review:

NVMe technology has been around for some time, but it has taken time for consumers and most importantly board manufacturers to take it on seriously – in our case, our motherboard didn’t feature an M.2 slot, meaning we had to get an  adaptor for around £30 to test the SSD. (Note: make sure it’s an NVMe adaptor, connects through PCIe and has an M.2 connector.)

The M.2 form factor is miniscule, at only 22.15×80.15×2.38mm, it definitely isn’t a storage device you would associate with blistering fast speeds.

We should mention that the 960 Evo 1TB features a Low Power DDR3 1TB Memory Cache. This gives it lots of headroom when transferring large files to and from the drive.

The 960 Evo, like the 960 Pro features AES 256-bit and TCG Opal 2.0 hardware encryption to protect your data from hackers – you’ll have to enable this through software and through a UEFI-enabled BIOS. Samsung’s magician software is free to download and also ideal for firmware updates.

However its 4Kb performance is below-average, with only 32.8 MB/s read and 50.2 MB/s write speeds, the 960 Evo even falls short of SATA III drives!

On the plus side, the 960 Evo offers ridiculously fast speeds in all of its sequential benchmarks, making SATA III drives look sluggish in comparison. The difference is further emphasised when compared to a traditional HDD, such as the 7200 RPM Seagate hard drive in our comparison.

Using the PCIe lane speeds found on motherboards, the 960 Evo is able to shine and will provide you fantastic read/write speeds if you’re transferring large files back and forth.

As aforementioned, AS SSD benchmark was unable to correctly pick up the speeds of the 960 Evo, the same applied to the 960 Pro, where speeds were throttled by the benchmarking tool.

Look back at CrystalDiskMark, the 960 Evo yet again displays phenomenal sequential read/write speeds, but just like the 960 Pro falls short in its 4Kb tests.

In AS SSD’s compression benchmark, we noticed small inconsistencies between the read and write speeds, but these results were surprisingly better than those found on the 960 Pro.

In its copy benchmark, the drive provided fantastic results, with some of the fastest access times and fastest speeds we have tested to this date.

The 960 Evo is very much like its brother, the 960 Pro – it provides ridiculously fast speeds, but unlike the Pro is more affordable, making it a better buy for most consumers.

Granted, if you’re extremely serious and worried about its 4Kb read/write speeds, then the Pro might be the better purchase – especially given the better warranty and TBW data guarantee provided on the Pro drive.

If you’re looking for a drive that’s ridiculously fast, then the 960 Evo is still our recommendation. Of course cost does come into the equation and it’s more expensive than conventional SATA III drives out in the market today – but that’s the price you’re going to have to pay if you want those premium speeds.

If you’re not too fussed about speeds, then we would recommend holding off the purchase of NVMe drives in general – at least until they drop in price, just like SATA III SSDs did in the last eight years.

Let us know in the comments below if you feel NVMe is worth the investment or if you’ll be holding out for prices to drop!