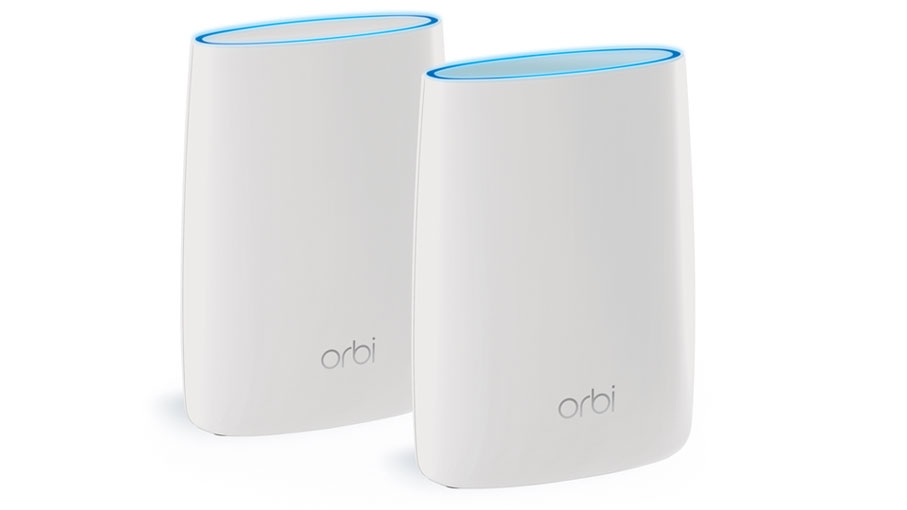 The Orbi system is expensive, even given the fact that it includes both a router and satellite together. If you only have one room where the Wi-Fi doesn’t work very well then you could save money simply by buying an inexpensive powerline adaptor or range extender for that particular spot. But for larger homes where you need to boost your wi-fi to an upper floor, or perhaps out into your garden, the sheer reliability (and expandability) of the Orbi’s Wi-Fi coverage will make it a very worthwhile investment.

Mesh networking is a bit of a buzzword at the moment, with the modular Eero system getting rave reviews earlier this year, and the recently announced Google Wifi getting in on the act too. And now it’s Netgear’s turn to provide a mesh networking system with its attractively designed two-piece Orbi system.

Using a single router for your home Wi-Fi network often means that there are ‘deadspots’, perhaps on the upper floors of your home – or, in my case, the office in the back bedroom where the Wi-Fi signal is obstructed by a couple of partition walls. Mesh networking tackles the deadspot problem by using multiple devices that are placed in separate rooms in order to provide more comprehensive Wi-Fi coverage throughout your home. The Orbi system consists of two devices – a primary router, and a secondary satellite – which Netgear claims can provide a strong, reliable Wi-Fi signal for homes up to 4,000 square feet in size.

Note: Netgear has released a lower-cost kit, the RBK30, reviewed, for homes up to around 3,500 square feet. Also read our Netgear Orbi Voice review.

The Orbi (now known by part number RBK50) costs £299.99 from Amazon (where you can also get the RBK40 for £248.98). It is also available from Currys and other retailers. You can buy additional satellites for larger homes that need even wider coverage.

In the US, the kit costs $249.99 from Amazon, where the other kits are also available.

The Orbi system is attractively designed, with both the main router and satellite looking more like little air humidifiers than high-tech pieces of networking kit. The main router is actually a fairly conventional tri-band router, equipped with six internal antenna that provide 3×3 MU-MIMO connectivity for suitably equipped computers and mobile devices. Tucked around the back of the router there are three Gigabit Ethernet ports, along with a USB 2.0 port – which, at this price, should be USB 3.0 – for connecting a printer or external storage device. The router doesn’t include a modem, though, so there’s a fourth Ethernet/LAN port that you have to use to connect the Orbi to an existing modem or router in order to provide internet access.

The satellite is very similar, although it lets you use all four of its Ethernet ports for wired connections. Both units also have a glowing LED on top that helpfully changes colour to indicate signal strength.  However, the best part of the Orbi’s design is its sheer ease of use.

You simply connect the Orbi router to your existing modem and router, then place the satellite in another room (which Netgear recommends should be roughly in the centre of your home). The router and satellite automatically sync together – glowing magenta once the process is complete – and the Orbi’s web browser controls include a start-up wizard that guides you through the process in a few simple steps.

The only drawback here is that the Orbi’s keep-it-simple approach means that it overlooks a few options that more experienced users might look for.  You can change the name and password for your network, and set up parental controls.

However, the Orbi creates just a single network using the combined 2.4GHz and 5GHz bands, with no option for creating separate networks on those two bands. This means you can’t force your phone, tablet, laptop or other kit to connect to one frequency or other.

There’s no mobile app either, although Netgear says that it’s working on one for iOS and Android.

Although the Orbi is a tri-band 802.11ac system, it uses one of its 5GHz bands as the ‘backbone’ that syncs the router and satellite together. This means that the Orbi offers a theoretical maximum speed of 3000Mb/s on the remaining 2.4GHz and 5GHz bands, so it’s not the fastest router currently available. Even so, our tests showed that the Orbi is still pretty fast, and also achieves its primary aim of providing better coverage throughout your home.

With two desktop computers located just five feet away from the main Orbi router, the Tamosoft Throughput Test recorded a speed of 435Mb/s. That’s by no means the fastest speed available from the latest tri-band routers, but it’s more than adequate for streaming music, high-definition video, and online gaming. And, more importantly, with the Orbi satellite set up in my office deadspot, I was able to get a steady, reliable Wi-Fi signal on my iMac for the very first time. The speed in my office did dip to around 400Mb/s, but it gave me perfectly usable Wi-Fi in a room where I’d previously relied on powerline adaptors to provide a wired connection.