The Hero 5 Black is the best action camera we’ve tested and the fact it’s cheaper than the outgoing Hero 4 Black sweetens the deal even further. With GPS, water resistance and video stabilisation, the Hero 5 is a fantastic upgrade from a Hero 4 Black.

The Hero 5 is an all-new action camera which combines the best bits from previous GoPro models and adds some new features – such as stabilisation and built-in GPS – which make it the best yet.

Note: GoPro has now dropped the price to £299.99. Below you will find our original review.

Also, our video player compresses all videos, which reduces their quality. Bear this in mind when watching: the quality from the Hero 5 is better than this.

See all action camera reviews, plus our Hero 4 Session review

The good news is that the new model is cheaper than the outgoing one. Considering Brexit is giving plenty of companies an excuse to hike prices, it’s a refreshing change that you can buy the Hero 5 Black for £349.99 from John Lewis. In the US it’s $399.99.

It’s sure to cause Hero 4 Black prices to fall quickly, which sold for £409.99 before the Hero 5 was released. See also: Hero 5 Session release date, price and features

A few millimetres bigger in all directions, the Hero 5 isn’t going to fit any housings designed for older GoPros, such as the Hero 4. But it will – naturally – fit GoPro’s new drone, the Karma.

It also works with the Karma Grip, a handheld gimbal which can be bought separately. 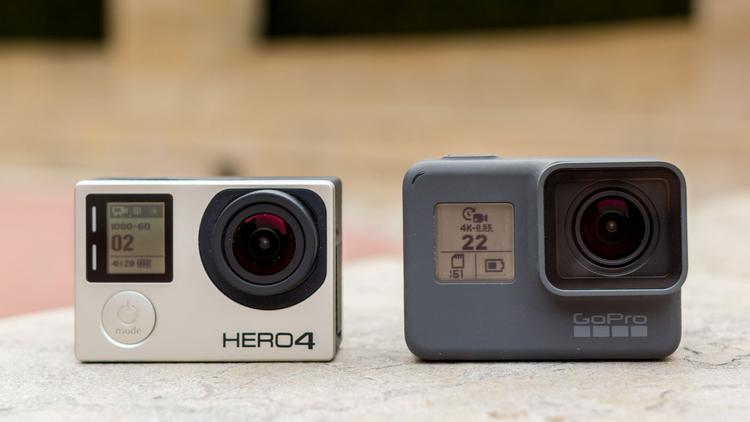 The chunkier styling and rubbery finish have a purpose, though: the Hero 5 is waterproof without a case (to a depth of 10m – you can buy the optional Super Suit if you want to go to 60m). Being water resistant is almost expected from today’s gadgets, and the original Hero Session was GoPro’s first waterproof action cam.

But the Hero 5 packs in lots more features, including a 1.95in touchscreen on the back and integrated GPS. 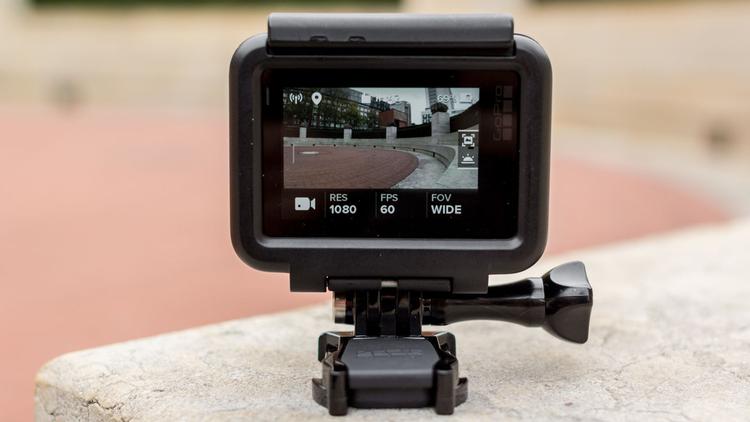 It comes with a frame so you can attach it to all of GoPro’s usual mounts and a handy feature is that the cover which protects the micro HDMI and USB C port is removable so you can connect cables even when it’s in the frame. The microSD slot is right next to the battery and it’s a little fiddly getting the card in and out.

The battery is removable – unlike the Session’s – but it’s a new design so your old ones won’t fit. GoPro claims it will last somewhere between 1.5 and 2.5 hours depending on the resolution, frame rate and whether EIS is enabled or not. We couldn’t find an option to disable Wi-Fi in the menus. 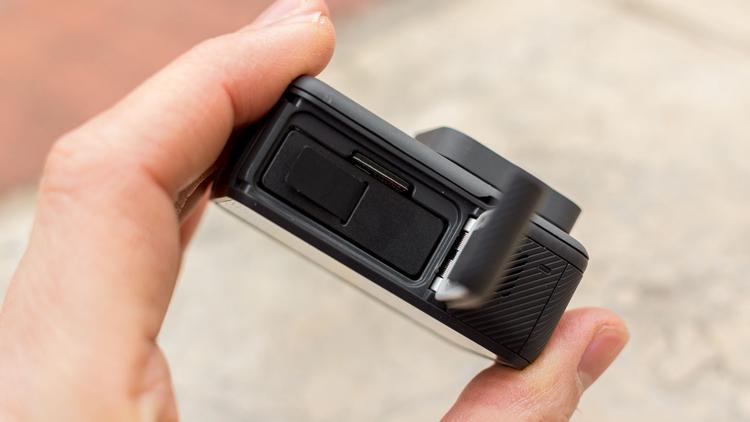 This electronic stabilisation has been a long time coming, and it would have been a severe disappointment had GoPro not introduced it on the Hero 5. It works effectively, but it’s a blow that it doesn’t work in 4K, but this is because there are no pixels to crop off to stabilise the video.

It records 4K at only 30fps, just like the Hero 4 Black, but you can choose up to 120fps in 1080p, and 240fps at 720p. The field of view is selectable in most modes and restricted in some: have a play and you’ll soon find which works best for you.

New on the Hero 5 is time-lapse video, which is automatically created in camera and can then be shared straight away (via your phone) to Facebook and other means.

GoPro has adopted a similar control method as for the Session, removing the traditional front button. One press of the big button on top turns on the camera and starts recording in the default mode, which you can choose.

The side button can be used to instead turn on the camera so you can change settings (or to mark a highlight if you’re already recording). 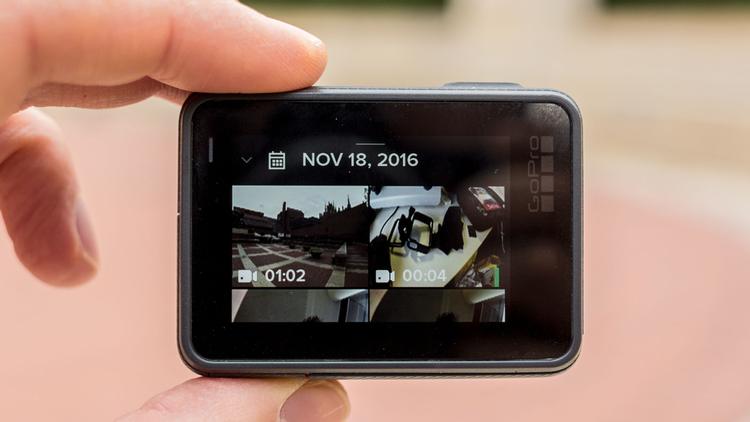 With the touchscreen, it’s really easy to change the resolution, framerate and FOV. It takes a little while to learn how to get to the other options: swipe right to review and trim videos; swipe down to see and change the general settings and swipe left to access other settings such as ProTune, stabilisation, microphones and low light.

Enabling the latter means the Hero 5 will automatically reduce the framerate in low light – a very handy function if you tend to record everything at 60fps or higher. 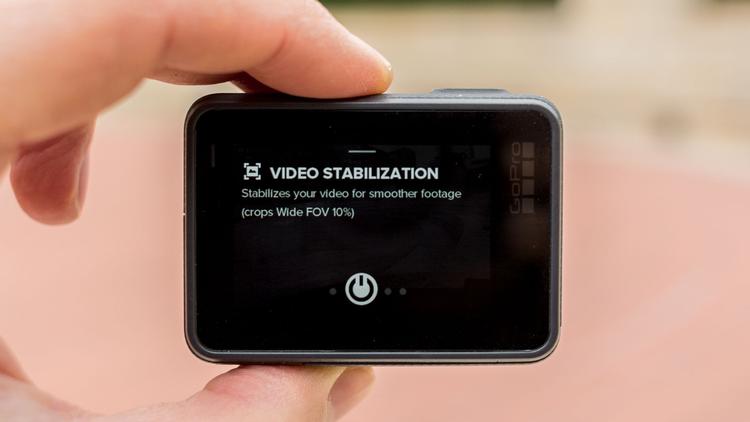 Our only complaint is that the OS is a little slow to respond compared to what you’d expect from a modern touchscreen device. Also, when in the frame, it’s hard to swipe in from the edge and the gesture isn’t always recognised.

A new way to control the Hero 5 is with voice commands (it supports seven languages at the moment). Testing these indoors proved very effective, such as “GoPro start recording”, “GoPro stop recording”, “GoPro take a photo” and “GoPro turn off”. But it’s not as reliable outdoors when there’s lots of background noise, and it can be hard to know if your command worked if you can’t see the camera. Also, you can’t use a voice command to turn on the Hero 5.

The usual GoPro beeps are pretty loud, although seemingly not as loud as the Hero 4, but it would be better to have vibration feedback like certain other action cams have. 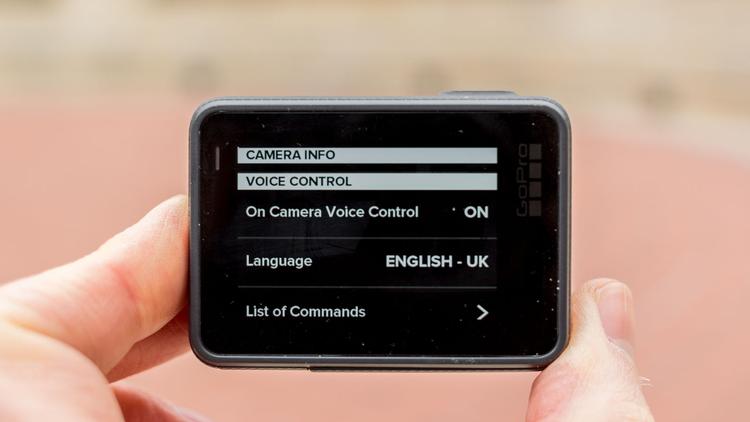 Another way to control the Hero is via the free Capture app. The name has changed, but overall it’s basically what you’re used to with GoPro’s previous cameras. It uses a combination of Wi-Fi and Bluetooth, Wi-Fi for the live video stream, and Bluetooth to allow you to turn on the camera remotely when it’s in standby.

Videos can be streamed from the camera over Wi-Fi and you can capture a still photo from a video, which is a feature many GoPro users have loved for a while now.

New is the Quik app. This is available on the desktop as well as mobile and allows you to pick several video clips from which the app will automatically create an edited video. You can tweak which portions of each clip are used, as well as picking background music. Obviously, if you’ve pressed the Highlight button, it will use those sections from the videos.

The latest update of the desktop version includes the ability to overlay the GPS data on your video. You can choose to display speed, altitude, distance, date, time and elevation gain.

A new service is GoPro Plus. There’s a free 60-day trial if you sign up on an Android device through the Capture app, but iOS users should use GoPro’s website as you’ll get only 30 days via the app.

When set up, the Hero 5 can automatically upload photos and videos from its memory card to GoPro’s cloud storage. Unfortunately, 4K clips are down-sampled to 1080p, so it’s not a great option if you mainly shoot in 4K.

Before getting to video quality, it’s worth talking audio. As with the Session, the fact you can use the Hero 5 without a waterproof case all the time means the microphones aren’t blocked by a plastic case. This immediately has huge benefits for sound quality. Plus, there are two mics and the processor will automatically switch between them to try to eliminate wind noise. Alternatively you can lock it to either wind cut or stereo recording if you prefer. Stereo, as the eagle-eyed will have spotted, is a first for GoPro – even the older Session with dual mics doesn’t record in stereo. The Hero 5 will even save a separate WAV file so you can edit the file with an audio editor. Overall, audio quality is very impressive for an action camera.

Video quality isn’t markedly different from the Hero 4 Black since both max out at 4K30. Comparing footage from both cameras, it’s difficult to see any differences: they both offer the same amount of detail in each mode and they have very similar colours and exposure.

The big difference comes – as you’d expect – from the stabilisation. Even with it turned off there’s a noticeable improvement over the Hero 4 Black. But when you turn it on, the difference is like night and day.

Ultimately, the Hero 4 Black already had top-notch image quality, so the Hero 5 can’t be criticised for being no better. But when you factor in the excellent stabilisation and better sound quality, it is better overall.