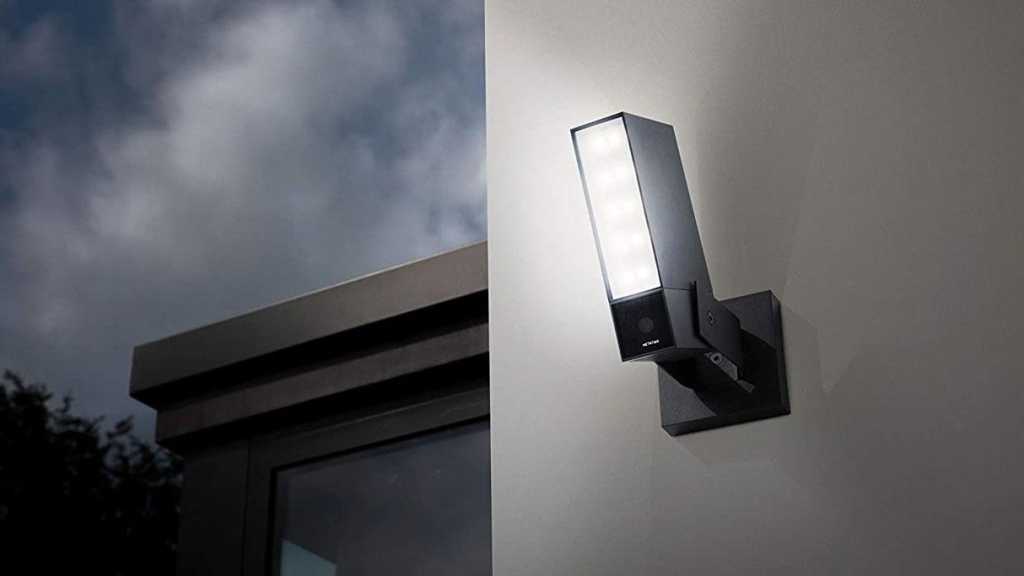 If you’re put off Nest and Ring cameras because of the subscription costs, the Netatmo is a worthy alternative.

The Netatmo Smart Outdoor Camera has been around since 2016 when it was called the Presence. And even though this new version has a built-in siren, the instructions still bear the Presence name. There’s really no other differences between the new version and old, so this review applies to both: there’s simply a manually operated siren in the latest model.

One of the main reasons the Netatmo is still one of the best choices if you’re after an outdoor security camera is because it records video to an embedded 8GB microSD card. This means the cost of allowing you to access your camera via the internet is much lower than Nest and Ring, which have to pay for the storage of all that video. And it means that there is no need to pay any subscription fees: the higher camera price is the only price you’ll ever pay.

It’s worth noting up front that there’s no option to record continuously, but the smart motion detection means all the important events are recorded and, arguably, there is little value in having hour upon hour of recorded footage where nothing of significance happens.

You might feel differently, in which case you’re better off choosing a camera or CCTV system which can record 24/7, but if you’re ok with this approach, read on.

Whether you consider it ugly or a great design, one of the best things about the Smart Outdoor Camera is that it doesn’t look like a security camera. The lens is at the bottom and at first glance you notice only the light.

If anything, the lens is easily mistaken for a motion sensor, so few people will realise they’re being recorded. (Note that the UK Protection of Freedoms Act sets out guidelines for using outdoor cameras in “a responsible way to protect the privacy of others”. )

Unlike other outdoor cameras, the Smart Outdoor Camera with Siren is designed to replace an existing outdoor light.

So if you have one, installation should be very easy. If not, it’s quite tricky as you’ll need to provide mains power somehow. If this already sounds like too much of a challenge, enlisting the skills of an electrician is the next step.

Assuming you do have an external light, double check on your phone that you have a good Wi-Fi signal at that location, and then you can drill the two necessary holes in your wall for the bracket.

After that’s mounted (fixings and screws are supplied) it’s just a case of using the supplied chocolate block to connect the mains wires which powered your old light.

Attaching the square plastic cover to the metal wall bracket can be fiddly, but it can be done. Then there’s an Allen bolt which secures the camera to the bracket, and you can tilt the unit up and down as well as left and right so it’s pointing in exactly the right direction. 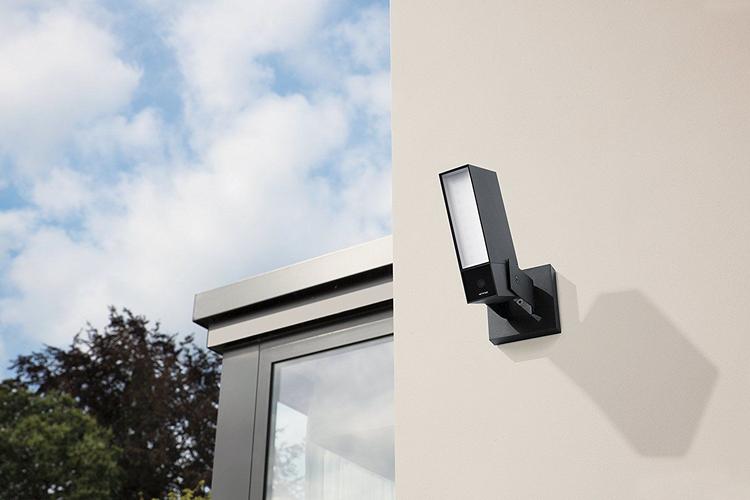 The only potential problem is when you have multiple external lights operated by the same switch, as all those which aren’t replaced by the camera will be on all the time (or your camera will be switched off when you turn the other lights off).

To set up the camera once it’s powered on you’ll need to install the Netatmo Security app and sign up for a Netatmo account.

A QR code is supplied in the box which you hold in front of the camera when the app tells you to, and then it’s simply a case of telling it which Wi-Fi network to use, and the password.

Note that it uses Bluetooth for setup and can only be done using a phone – not a computer.

It’s slightly odd that there’s no face recognition in the Outdoor Camera, as Netatmo’s Indoor Camera does have this feature. And it’s useful on competing outdoor products such as Nest’s Cam IQ Outdoor because you’ll know from the alert who has been spotted rather than the generic ‘person’ identification you get with this camera.

At least there is some intelligence: the Smart Outdoor Camera (with Siren) can detect whether it’s seeing a person, an animal or a car. This works for objects up to 65 feet away and sends alerts to your phone – and even your smartwatch.

The benefit of this system is that, unlike lesser cameras, you don’t end up with a stream of notifications that there’s motion simply because there’s a tree moving around in the wind.

And you can disable notifications for animals and cars, so you’re only notified about the things you actually want to know about.

On top of that, you can set up to four separate areas to monitor for motion, and ignore everything else. This is useful if you find you are getting false alarms.

There’s no sensitivity slider for motion detection, which isn’t really a problem, but it’s a shame there’s no way to specify which type of motion you want to watch out for in each zone. These are set globally.

In terms of notifications, you can set a time period when receive them, such as from 7am to 11pm.

There’s also an option to get notifications only when nobody is home, but this works only if you have a Netatmo Indoor camera too).

Alerts arrived within a couple of seconds of motion being detected, and we were impressed at the accuracy of the algorithm. It could correctly identify a person moving in the garden roughly 60 feet away, and picked up a surprising number of animals roaming during the night when using its infrared LEDs.

On the main screen of the app is a still image from the selected camera (you swipe between them if you more than one) and you have to tap the play button to see the video feed.

You can rotate your phone to make the video full-screen, and there’s digital zoom so you can make things larger.

Below the thumbnail is a timeline of events. 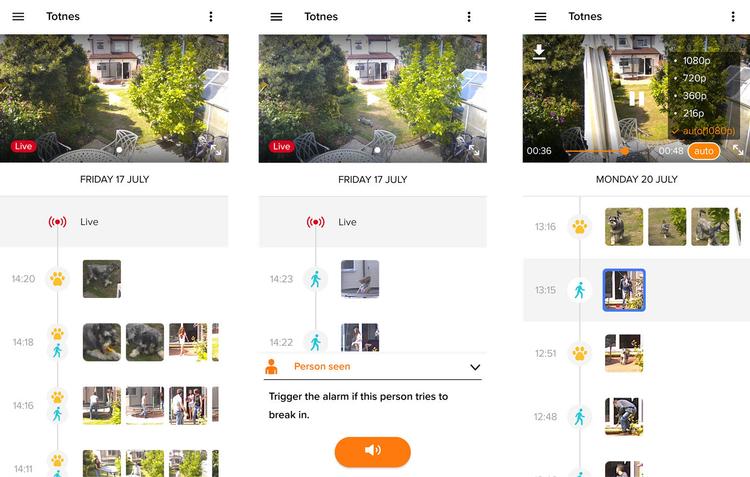 One or more thumbnails highlight what has been detected, and you can tap one to play the video clip containing the action.

If it’s significant (or simply amusing), you can download the clip to your phone and easily share it with others.

It’s best to download clips when you’re at home on the same Wi-Fi network for the fastest speed, but you can do it remotely. However, there’s no progress indicator and you can’t leave it downloading in the background while you review other clips or change settings.

When the microSD card fills up, the oldest videos are deleted automatically. If you want to keep everything, you can link your Dropbox account, but the best option is to get the camera to send video to an FTP server, such as one running on a NAS drive. This way you can easily access the full-HD clips and the video will be safe even if someone steals the camera.

A fun, but not amazingly useful feature, is the ability to download a time-lapse of the previous 24 hours as a short video file.

The floodlight is nice and bright and there’s a slider so you can dim it to the brightness you want. The light can be set to on, off or auto mode. In the latter, you can set it to turn on whenever people, cars or animals are detected. You just enable the categories you want. There’s also ‘other motions’ as a catch-all for anything else.

You might expect the siren to be triggered automatically when a person is detected during certain hours, but it is an entirely manual affair. Essentially, the idea is that you turn it on if you’ve spotted someone doing something you dislike: a button appears in the app when a person has been seen. And it’s probably for the best: your neighbours won’t thank you for a loud warbling in the night. 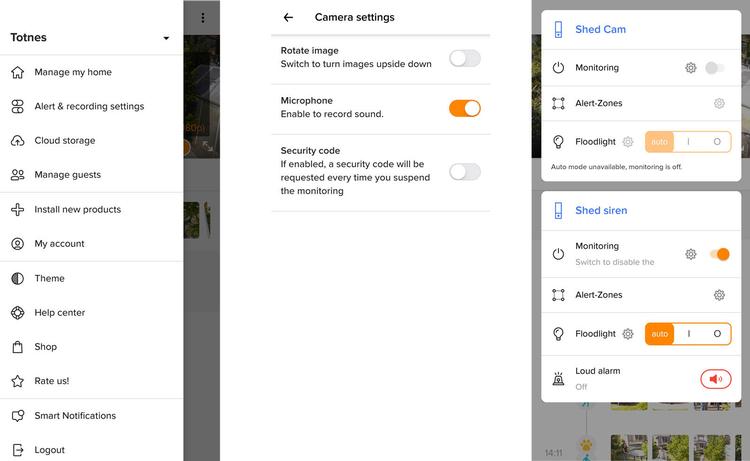 The floodlight controls are not on the main screen, but rather buried in the settings.

At least there’s integration with Google Assistant and Amazon Alexa (and support for HomeKit, too) so you can turn the light on and off with your voice, so long as you have a compatible smart speaker or another device with those assistants built in.

As mentioned, there are two versions of the camera: with Siren and without.

The new model, with the siren, costs £319.99 / €349.99. You can buy one from Amazon or Netatmo directly (where there are discounts for buying two at once). It’s not available in the US or Australia yet.

Wherever you live, it’s a relatively expensive choice compared to some outdoor security cameras, but it is always important to consider the lifetime cost. Most rivals use cloud storage and therefore charge a subscription fee, either monthly or annually. But with the Netatmo, you just pay once and then it’s yours to own and use.

For alternatives, read our roundup of the  best security cameras. Also, note that Nest has revamped its pricing and now covers multiple cameras for a much lower monthly fee.

Overall, the Netatmo Smart Outdoor Camera is an excellent choice for most people. It records good-quality video and the motion detection works well. Unlike Netatmo’s Indoor camera, it can’t recognise faces, which is a shame, and even though the new model now has a built-in Siren, there’s still no speaker so you could talk back to someone.

The high price is justified, though, since there are no on-going costs, yet you can still view the live video feed and download clips remotely via the internet.