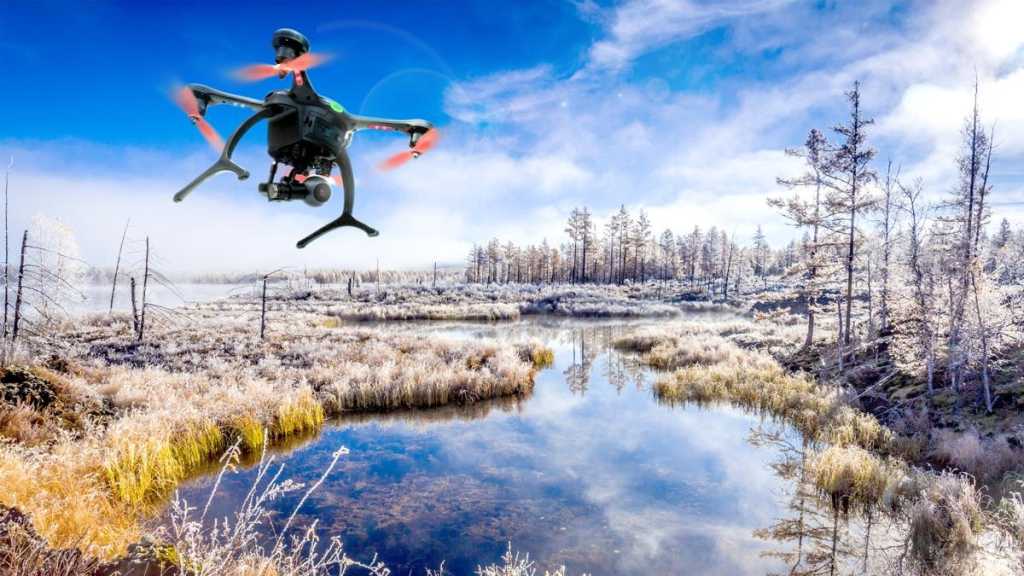 While we’re impressed with the Ghost Drone 2.0 and its accompanying app, we’re not quite sure if the supplied VR headset is worth the extra £380. The quality of the headset isn’t great, it isn’t comfortable to wear and the displays within them are fairly low-resolution. The drone itself is great to fly and is a great – if slightly expensive – option for first-time flyers, especially with the large number of in-app tutorials and the extensive safety features on the drone itself. The quality of the video captured by the camera is of a high quality, although it doesn’t perform well in situations with low light i.e. dusk.

With drones becoming more high-tech than ever, it was only a matter of time until a company created one that comes with its own VR headset, allowing users to ‘see’ through the camera of the drone. The recently announced EHANG Ghost Drone 2.0 VR does exactly that, but is the FPV element a gimmick or a valuable resource for anybody that likes to fly drones? We used the 4K-boasting drone for a few weeks, and here’s what we think. Read next: Best drones with cameras

So, how much does the EHANG Ghost Drone 2.0 VR cost and where can you pick it up in the UK? In the UK, it’ll set users back £829, meaning it isn’t by any means the cheapest drone on the market but we think you get pretty good value for money, especially with a gimballed camera recording 4K video and an FPV headset. If you’re new to the world of drones, you may want to start with something a little more basic (and cheaper) than this, although the design of the drone and the corresponding app meaning that even those with minimal drone experience can pick it up and operate it.

As for availability, the Ghost Drone 2.0 VR isn’t available in the UK just yet – although you can pick it up in the US. While there isn’t currently a solid release date in place, interested users can head over to Amazon right now to pre-order it. It’s worth noting that there are two different versions, one for iOS and one for Android, so be sure that you pick the right variant when placing the pre-order.

So, what makes the EHANG Ghost Drone 2.0 VR stand out from the competition? The Ghost Drone comes with a ‘VR headset’, which provides a first person view via the gimballed camera attached to the bottom of the drone and is controlled via an iOS or Android smartphone. We dispute the VR branding, but we’ll come to that in a little more detail below. There’s also a version of the drone available that negates the need for the VR headset, and is almost half the price at £449, so it’s worth considering if you really need/want the headset. The drone itself is fairly lightweight and portable, making it easy to transport to the various locations you want to explore, weighing in at just over 1KG at 1150g.

The VR headset actually works as the middle-man between your smartphone and the drone, as both you and the drone connect to the Wi-Fi connection broadcast by the headset. This also means that you have to have the VR headset with you at all times, even if you have no plan to use it during the flight. EHANG claims that the drone can reach distances of 500m+ thanks to the combined use of the 2.4GHz and 5.8GHz frequencies, providing both stability and range. 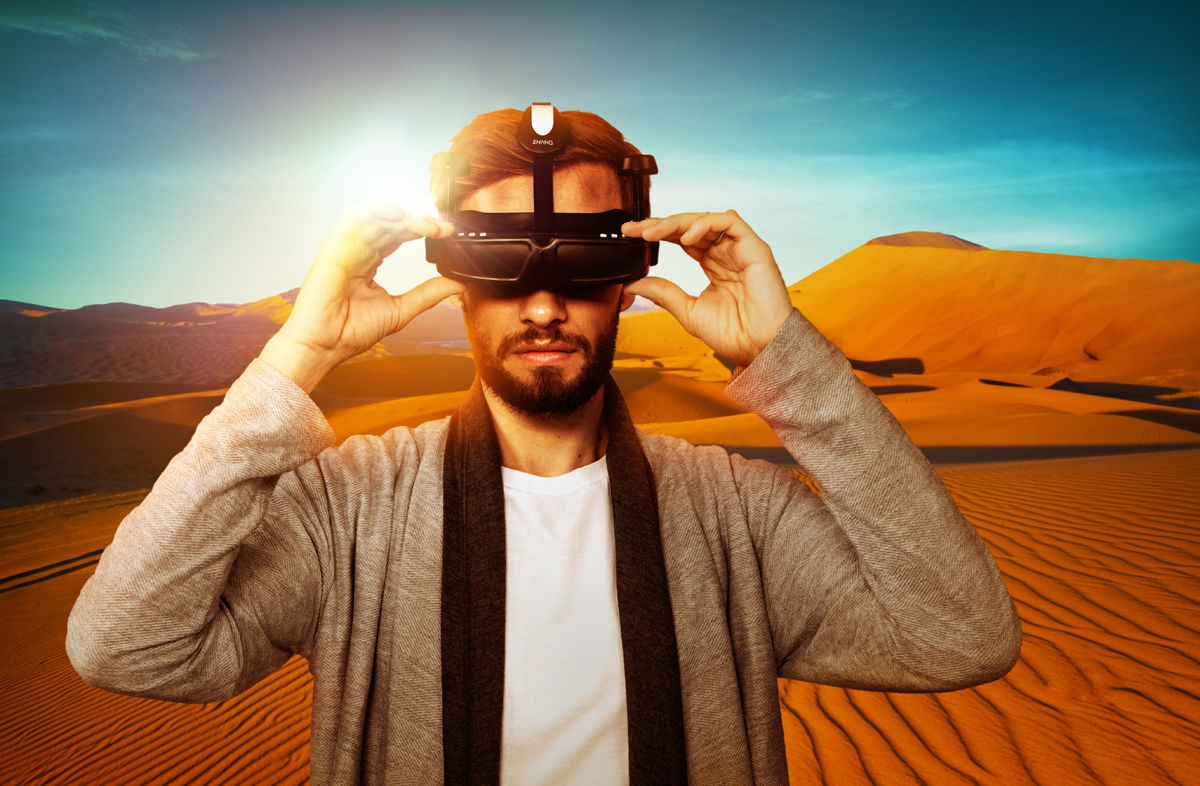 We couldn’t test this during our time with the drone though, as UK Drone law dictates that the drone should be in view at all times and we didn’t want to go that high or far. It reached heights of around 50-60m fairly quickly and without any real effort from the drone, which should suffice for average UK drone users.

An interesting feature of the Ghost Drone 2.0 VR is that it features self-tightening propellers that shouldn’t come loose mid-flight. This is combined with “high-efficiency downward facing brushless motors” help to increase the stability of the drone, along with extra weather (see: wind) resistance – although we wouldn’t recommend flying it in anything more than a light breeze, as the wind may be much stronger above you than on the ground.

In terms of battery life, you should get around 25 minutes per charge although this will depend on the speed of the drone, as well as the weather conditions – if the drone has to constantly correct itself due to high winds, it’ll run out of battery much sooner. Don’t worry if the battery does die mid-flight though, as it’ll use the built-in GPS to automatically land from the spot where it originally took off from. We never had any issues with battery life, which is a rare thing to say in the drone world, but we’d recommend buying an additional battery for longer sessions.

We love the battery because it’s intelligent – while it won’t be making you tea any time soon, it features a display giving you a power breakdown of the battery overall, as well as each individual cell. It also tells you how much battery power it has left at a glance, an invaluable feature for drone users. 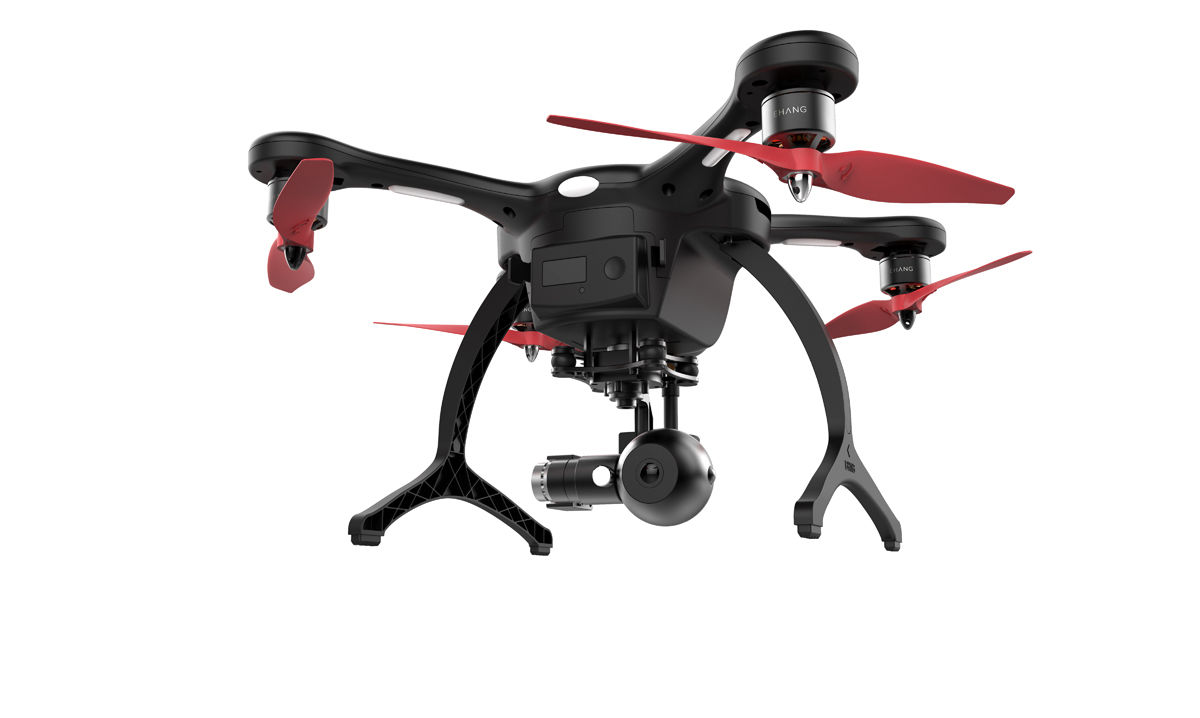 In terms of photo and video capabilities, the Ghost Drone 2.0 VR is capable of capturing full 4K at 24fps, keeping in with the cinematic style. However, if 24fps is a bit slow or you’re concerned about the large file sizes of 4K video, you’ll be happy to know that there are a number of other shooting modes available including 2.5K@30fps, 1080p@60fps and 720p@120fps. It’s also capable of taking 12Mp photos.

In terms of video quality, we were fairly impressed by the colour reproduction and amount of detail provided, although with such an f2.8 aperture, the quality of the video decreases as the amount of light does. It performed okay at dusk, but performs best on clear, sunny days. While the 93-degree wide-angle lens provides users with a grander image than with a standard lens, the curvature in the lens is noticeable when panning.

Both videos and photos are stored on the drone itself on a MicroSD card (64GB card supplied) and is assessable via an alternate Wi-Fi network whenever the drone isn’t in use. While this allows easy access to your photos and videos, it also means that you’re unable to preview them mid-flight as you’re required to stay connected to the main Wi-Fi connection at all times. You’re also required to access the SD card on a PC/Mac for full-res videos, as you’ll only get 240p variants via the app.

Providing drone controls via a smartphone app is a bold move, and relies heavily on the quality of the app. If the app works as expected it’ll provide a great overall experience but if it freezes or glitches, it can completely ruin the experience. However, we can happily say that the EHANG Ghost Drone 2.0 VR’s accompanying iOS app was well designed and provided a great overall user experience, although as with any app, there can be improvements made.

EHANG prides itself on the fact that people with little or no experience can easily fly the Ghost Drone 2.0 VR and we largely agree with this. There are two flying modes – waypoint and manual – with the app recommending that you complete at least three flights in waypoint mode before getting full manual control of the drone. This is great as it gives drone operators new and old an opportunity to become familiar with the drone and the app. It’s also packed full of tutorials for almost every aspect of the drone, with many featuring accompanying video tutorials that should help you with any queries you may have.

The first time you use either mode, you must follow the on-screen tutorial which takes you through the various features of the mode. The waypoint mode is incredibly easy to use and is recommended for novice users, as you simply tap to mark your waypoint on a map and the drone will fly there, leaving you free to control other elements like rotation, height and more to get the perfect video or photo. 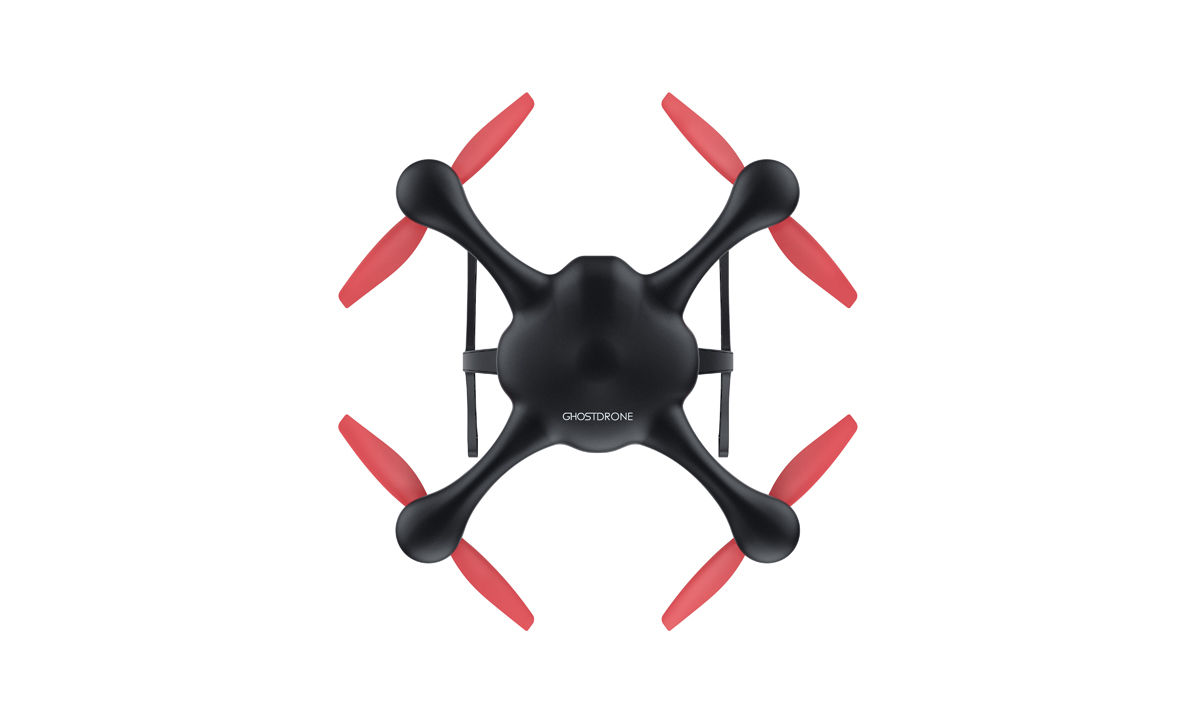 It also allows you to toggle additional flight modes, like Follow Me, which will make the drone lock onto your location and follow you as you walk/run/bike ride along a scenic vista. It works well and the drone managed to keep pace with us, but the feature is a little bit of a gimmick in our opinion – it’s nice to have for the occasional tracking shot, but isn’t a deal-breaker.

The manual mode is where things start to get really interesting. While many drones that use smartphones as controllers will provide on-screen controls for the user, EHANG uses the built-in gyroscope to control the drone. While we were dubious at first, the controls are intuitive and thanks to built-in algorithms that counter human errors during flight, our manual flights were pretty much accident-free (although there were one or two times we came close!). The drone itself also features dual sensors that keep it in the air and operational, even if one fails for whatever reason.

It makes sense to be able to control the drone by tilting it, as you wouldn’t be able to wear the provided VR headset and look at on-screen controls at the same time. Although with that being said, wearing the VR headset while flying the drone in manual mode did take a lot of getting used to, mainly because it’s much harder to judge distance when wearing the headset. We’d recommend, if possible, to have one drone operator and one VR headset/camera operator to get the best possible video results from the Ghost Drone 2.0 VR. Don’t fret if you’re a one-man-band, as you’re also able to disable the VR headset controls and control the camera in-app, although there is no live camera stream from the drone available.

As you may imagine, it’s much more fun to fly the drone in manual mode too. While the waypoint mode provides speeds of up to 25mph, the Ghost Drone 2.0 VR can go up to 42mph in manual mode, although the battery drains rather quickly when performing at these speeds. It’s not built for racing or OTT tricks though, so there’s a limit to what you can do with the drone – it does cost over £800 after all.

So, what’s the experience like when using the VR headset? Considering the price boost from the standard Ghost Drone 2.0, we were expecting something fairly impressive. Sadly, this wasn’t the case. The headset was fairly small and lightweight which was a plus, but it wasn’t very comfortable to wear and there were gaps around the edges of the headset that let light leak into the headset. One cool feature is that it boasts a built-in sensor that can detect movement, allowing your up-and-down head movements to be mimicked by the drone camera, although it won’t move left or right.

The display isn’t quite what we’d imagined either – while many VR headsets use special wide-angle lenses to create the feeling of immersion, we felt more like we were looking through the viewfinder of a late-90s camcorder. It performed well until the drone was around 40m away, but by the time it hit 50m, we’d lost visual connection completely. We were still able to control the drone itself, but we were no longer able to use the VR headset.