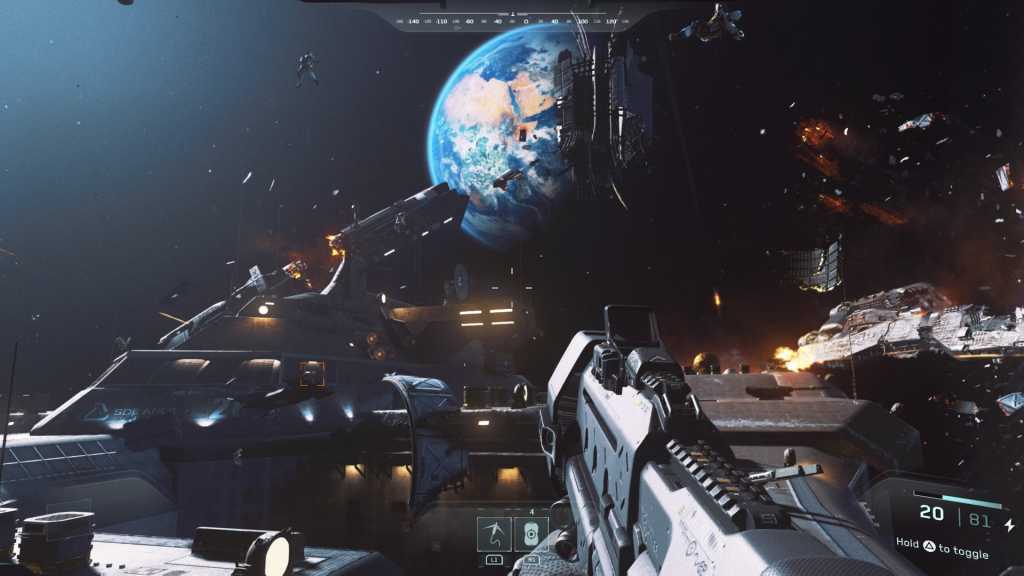 Call of Duty: Infinite Warfare isn’t comparable to Battlefield 1, but that’s not necessarily a bad thing. While BF1 focuses on emotion and the brutality of war, the Infinite Warfare campaign is about as Hollywood as it comes with explosions, collapsing buildings and gorgeous planets offering stunning backdrops for your firefights – but that’s not to say there’s no emotion involved. Anti-gravity gunfights are a lot more exciting than first imagined and the space dog-fighting was not only easy to pick up, but extremely intuitive and enjoyable. The introduction of celebrities like Kit Harington in the campaign provides more depth to the character, while also making it a little easier to relate, or at least understand, the situation at hand.

So, when can you buy Call of Duty: Infinite Warfare, and how much will it set you back? The game is now on sale after being released on Friday, 4 November 2016 and is available to buy from a number of retailers, however there’s a catch – there are, as usual, a few different editions available for Call of Duty Infinite Warfare. We’ve detailed them below so you can see what you get with each one:

Those interested can head to either Amazon, GAME or Steam right now and pick up whichever edition you desire.

Before we delve into the amazing world of Call of Duty: Infinite Warfare, we thought we’d first address a feud that has been going on for as long as we can remember: Call of Duty Vs Battlefield. While the two games were originally quite similar in terms of gameplay and scope, the two have gone their separate ways over the years and we think this is most evident with the two most recent releases, Battlefield 1 and Call of Duty: Infinite Warfare.  Click here for more games news and reviews

Battlefield 1 is emotional, gripping and focuses on the stories of those that fought and died during WW1 and while Infinite Warfare has an emotional storyline, it’s much more ‘blockbuster’ than the competition. Buildings collapsing around you, ships falling from the sky and warships being blown up in zero gravity are just a handful of the sights that you’ll see in Infinite Warfare. It’s Hollywood-esque in execution, but this isn’t a bad thing when depicting a fictional war – indulge in the chaos and SFX and it’ll make the Infinite Warfare experience a much greater one.

Call of Duty: Infinite Warfare is set in an alternate timeline where Humans have travelled to the stars and colonised Mars, just as Tesla CEO Elon Musk plans to do in the real world. However, in this skewed vision of humanity’s future, some “Martians” believe that Mars should be a free and independent planet, separate from Earth and no longer under rule of the home planet. The residents of Mars don’t understand the logic of freedom, and prefer the militarised lives that they lead on the red planet.

While the ideology of an independent Mars is shared amongst the entire Martian front, Infinity Ward decided to seek the acting expertise of Game of Thrones’ Kit Harington to bring the character of Admiral Salen Kotch to life. Harington is a great addition to the game, and really helped us engage with his character and motivations. Whether on the surface of a moon or orbiting a far-away planet, Earth’s united military and Mars’ Settlement Defence Front go head to head in a some of the most incredible backdrops from any Call of Duty game in the series.

For all those trying to poke holes in the mechanics of the game by pointing out that you can’t hear sound in the vacuum of space, developer Infinity Ward has an explanation (courtesy of PlayStation Blog): “In the game, there’s a way your suit can simulate those sounds and impacts through photons so that you have a tactical awareness of your environment. We’ve dampened the sound a little, but it’s still there to make sure the player has a good time. This is actually not science fiction either — it’s actually very plausible.” So yeah, take that nay-sayers.

The environments featured in Infinite Warfare are absolutely stunning – there’s no other way to describe them. Battling on Saturn’s moon Europa was a personal favourite of ours, as everything – from the lighting to the quality of the textures used and Saturn in the picturesque backdrop – was realistic, stunning and really helped immerse us in the extraterrestrial battlefield.

With that being said, we weren’t expecting much from zero-gravity gunplay but after spending time with Infinite Warfare’s zero-gravity mechanics (thanks to a booster suit you wear), we must admit that we’re converted. Battling in an asteroid belt is a new and exciting experience and when paired with a grapple offers a completely new way to play the game. You can use asteroids for shelter, or grapple your enemy, pulling them towards you and finishing them off in typical Call of Duty fashion. Triggering a grenade on the enemy’s suit and boosting away has to be our favourite of the bunch though, it never gets old. Plus, watching your defeated enemies float off into the vastness of space is strangely satisfying.

Of course, not all gunplay takes place in anti-gravity environments, and it’s here that the old-school Call of Duty mechanics shine through, providing extremely fast paced, dramatic and thrilling gameplay. Tight corners provide tense moments, especially when you turn a corner and see an enemy aiming an RPG at you and have a split second to react before you’re blasted to smithereens. It’s the same core mechanics that keep Call of Duty fans flocking back, year after year, and we’d argue that this particular implementation of gunplay and movement mechanics provides the best gameplay of any Call of Duty game to date.

However, with that being said, we were quite surprised at just how intuitive and fun flying around in the state-of-the-art Jackal was. The Jackal is your personal ship enabling inter-planetary exploration, allowing you to take on the enemy in space as well as the various planets the campaign takes you to. The control scheme is simple-yet-effective and when combined with a responsive ship, dog fighting can – and is – one of the most enjoyable elements of the game. Each type of enemy ship has its own strengths and weaknesses and part of the fun is figuring out how to take each down (as well as blowing it to pieces, of course).

Although Call of Duty: Infinite Warfare’s campaign is dramatic and Hollywood-esque in both design and execution, there are snippets of real emotion weaved throughout its tapestry. Despite being a war taking place in a fictional timeline, the monumental decisions of those taking part in the war are just as difficult as those posed in Battlefield 1, although with much more fanfare and country-sized explosions. The Captain’s job is to win the war for those back home, not make sure their troops survive – a notion reinforced throughout the Infinite Warfare campaign. The storyline is engaging, thought-provoking and is hands down our favourite Call of Duty game in the series.

Call of Duty: Infinite Warfare’s online multiplayer is different from previous iterations, mainly because it tries to introduce an (arguably weak) storyline to make sense of the online gameplay. While other developers skip over the need for a storyline, Infinite Warfare markets you as a mercenary for hire with various factions offering various specialities like tech, weapons, etc. As you play the game and rank up, your reputation increases and you’ll have the opportunity to move factions and gain access to a variety of different weapons and tech.

As ever with Call of Duty, there’s a huge emphasis on customisation – not only of the weapon, but character and even the ‘rig’ that you wear. Let’s start with rigs – there are three available, offering not only different advantages in-game but also different abilities. Take Synaptic for example – every time you get a kill, you’ll experience a temporary speed boost. That’s not all though, as you’ll have access to extremely powerful close-range machine guns as your unique power up. The power up bar fills slowly over time, but can be sped up by performing skilled kills (headshots, kill in the air, etc). However, if that’s not your style, you can opt for one of the other two rigs available that offer different abilities to suit your play style.

As well as the different abilities, users can also customise the look of the rig using skins unlocked via weapon crates or performing in-game tasks, like killing 200 enemies overall. Skins are a huge deal in Infinite Warfare, allowing you to customise not only the rig but your weapons too. While there’s no real in-game benefit to using a skin on your character or weapon, it allows you to create a loadout that is (you assume) unique and reflects your personality/interests. Plus, who doesn’t want to mow down the competition with a golden gun?

In-game mission objectives are separate to the type of game you’ve chosen to play, and give you something personal to aim for as you play online. These objectives can vary wildly depending on your rank and overall experience, but users can expect a range of objectives with varying levels of difficulty, from taking out five enemies to killing three enemies with three different weapons in a single game. Completion of these mission objectives provides users with extra XP at the end of the match, and usually increases the number of keys that you earn.

What are keys, you say? Keys are awarded to players after every match, with every player receiving at least one per match – although those that perform well in-game will likely receive more. The keys are used to buy weapon crates, which contain weapons, skins and icons you can customise your calling card with, all with varying degrees of rarity. While the standard box costs 10 keys, you can save up and buy a premium box with a higher chance to drop a rare gun/skin/etc. Of course, as with most games, you can buy these with real money – but where’s the fun in that?

The Infinite Warfare multiplayer maps are mostly close-quarters, with a few larger maps spread amongst the larger game modes. While the environments are very well designed, very detailed (even down to the ‘hum’ you hear on ships and the sound of bullet shells hitting the floor) and generally easy to navigate, the gameplay itself is quite frustrating.

We’re not sure if this is due to different styles of gamers playing Call of Duty when compared to Battlefield, if it’s down to the effectiveness of its arsenal of weapons or something else, but you die. A lot. While 10 deaths in a standard game in Battlefield 1 would be frowned upon, people across both teams were hitting 20-30 deaths on average in our Infinite Warfare online matches (us sadly included). We’d spawn, run for a few seconds and get shot from someone behind us.

The issue is that as the guns are rapidly firing and extremely powerful, as soon as you hit you’re essentially dead, with no time to turn around and react to the situation. While this means gameplay is constantly fast paced, it doesn’t offer any room strategy or skill and is slightly disappointing when compared to its thoroughly enjoyable campaign. Infinity Ward acknowledges this and provide an instant respawn to get you back into the action, but we feel that the online multiplayer is slightly disappointing when compared to the competition in 2016.