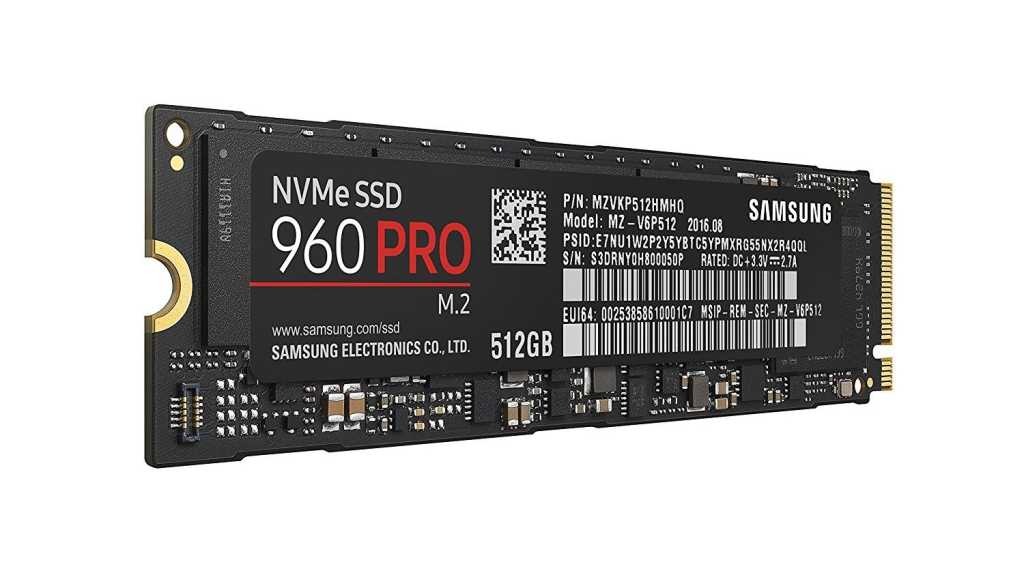 The Samsung 960 Pro M.2 provides unbeatable sequential performance, but comes at a high cost. You’ll need the right motherboard or PCIe adaptor and a large sum of money to buy the drive. Nevertheless, if you’re looking for an internal drive with the best read/write speeds, the 960 Pro is our top recommendation.

The typical SSD often comes in a 2.5in form factor, while being connected to a SATA III bus. However, the old technology is slowly losing favour with consumers, as its interface provides a bottleneck in performance.

Like its other SSDs, Samsung offers a five-year warranty and guarantees 400 TBW (terabytes written) with its 960 Pro 512GB. Read next: Best portable hard drives 2016.

When connected to our Windows 10 test rig, we found the 960 Pro to provide us with 476GB of usable storage, resulting in a high £0.65 cost per GB. As aforementioned, this is double, if not triple the cost per GB found in contional SATA III SSDs. Read next: How to build a PC.

Prices change on a daily basis, but these were correct at the time of each review:

NVMe, the technology within the 960 Pro has been around for some time, but it has taken manufacturers like Samsung to fully adopt it – most importantly, it has taken a while for motherboard manufacturers to provide it as a socket on the board itself. However, if like us you don’t have a motherboard with an integrated M.2 connector, you can buy an adaptor for around £30 – you’ll want to make sure that it’s an NVMe adaptor, connects through PCIe and has an M.2 connector.

Its M.2 form factor with 22.15×80.15×2.38mm dimensions is not to be underestimated. Despite its small size, the NVMe SSD uses Samsung’s V-NAND technology by utilising the MLC (multi-level cell) to store data. through V-NAND, Samsung has been able to achieve fast performance in its SATA III SSDs and its technology has carried forward to its NVMe M.2 form-factor drives too.

The 960 Pro features AES 256-bit and TCG Opal 2.0 hardware encryption to securely protect your data from hackers – this however needs to be enabled through Samsung’s Magician software and be used on a UEFI-enabled BIOS. More information about the technology used within the SSD and its features can be found on Samsung’s website.

Samsung’s magician software is useful to monitor the drive and even benchmark it. Through the software you’ll be notified about firmware updates and be able to securely erase it.

If you have a laptop that has an M.2 connector, you’ll want to know its power consumption, which sits at 5.1W while active and 0.4W in idle standby. Read next: Best NAS drives 2016.

Through CrystalDiskMark, the 960 Pro absolutely dominated the field, with a random sequential read of 2048.8 MB/s and write of 1822.7 MB/s, it simply leaves every SATA III SSD in its dust. These insane read/write speeds are thanks to the NVMe interface – and it clearly shows a difference.

However, its 4Kb performance was disappointing, given its price point – nevertheless the 960 Pro scores above all other SATA III SSDs out there in the market today.

In comparison to both SATA III drives and more traditional HDDs, the NVMe M.2 960 Pro is leagues above in its overall sequential performance, however we find the drive to struggle in AS SSD benchmark – where we feel Windows wasn’t able to fully correlate the speeds to our benchmark. Looking at the AS SSD benchmark results below, more specifically its 4K Write performance, you might be surprised to see a HDD-type performance from the 960 Pro.

It’s therefore more evident that NVMe has still some time to go forward and it looks like certain benchmarks, such as AS SSD aren’t able to pick up its full glory.

Moving back to CrystalDiskMark, the 960 Pro has a fantastic 0 Fill performance, except when it had to deal with the random read 4Kb tests, where the 960 Pro fell short again.

In AS SSD benchmark, we found the compression benchmark to be quite inconsistent – where results were extremely fast, but lacked consistency.

On the plus side, its copy benchmark showcased how fast and quick the 960 Pro was able to perform certain tasks. We found its program speed to be identical to SATA III alternatives, but its ISO and Game speed to be far above the rest.

The 960 Pro is hands down the fastest SSD we’ve come across and that’s due to its NVMe interface. This truly showcases how fast SSDs can go, when they’re not bottlenecked by an old SATA III bus.

Is the 960 Pro really for me?
If you’ve got the money to splash out and you’re looking for the fastest possible sequential read/write speeds, then the 960 Pro should be your go-to drive. But, not everyone has ~£300 to spend on a 512GB drive. For the same amount you can buy two SATA III drives and still have pocket change.

Is the performance worth it in the 960 Pro?
It all depends on how many files you’re transferring a day, more specifically single large files or multiple smaller files. If you’ll be using the drive to transfer very large video files, the 960 Pro will provide you with a significant boost in performance. However, if you’ll be transferring thousands of small files, then the small increase in its 4Kb benchmarks, means that the 960 Pro can’t fully justify its huge price difference.

It all comes down to those blistering fast speeds and how important time it is to you. We feel that every-day consumers will benefit from larger storage space found on SATA III SSDs, versus the smaller, yet much faster NVMe SSDs such as the 960 Pro.

Let us know in the comments below if you feel NVMe is worth the investment or if you’ll be holding out for prices to drop, before making the plunge.