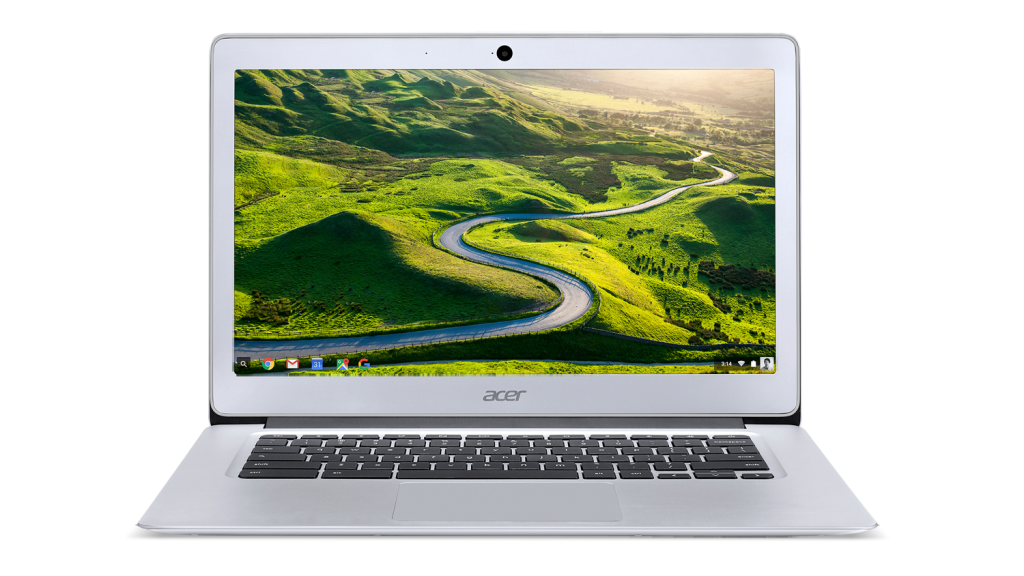 There’s a lot to like about the Acer, including it’s smart design, larger screen size, and impressively long battery life. These are offset by a few less than desirable components. The display is adequate at best, the keyboard is also average, and performance feels hampered by the low memory allocation. It’s a solid machine, but the compromises may be too much for some.

Large displays are an uncommon sight on Chromebooks. The vast majority of models available tend to feature an 11.6in screen that makes them a good option for everyday use while keeping them portable. Acer knows this, as its very popular R11 Chromebook proves. But those who desire a bit more real estate for their eyes could well be tempted by Acer’s new offering: the Chromebook 14. So, does it have the performance to match its size and take on the perennial favourites like the Toshiba Chromebook 2 or Dell’s Chromebook 11? We take a look.

Acer used to offer two variants of the Chromebook 14: the one we’re reviewing here costs £249 (a price increase from £199 when we originally reviewed it in October 2016), and another (now discontinues) which has a full HD display, and double the RAM and storage. If you’re shopping for a 14-inch screen in particular then there really aren’t many alternatives. If you can live with 13.3 inches, try the Asus C300.

If truth be told, Chromebook designs can be a bit on the basic side. Unless you go for the gorgeous but hilariously priced Google Pixel, then you’re most likely looking at a mainly plastic chassis with a sparse amount of ports and connections. This is absolutely fine, as Chromebooks are simple beasts and this is one of the things that makes them so appealing.

It’s a pleasant surprise then to take the Acer out of its box and find what seems to be a brushed aluminium lid. Scanning through the specs reveals that the chassis is listed as all-metal, with Acer describing it as an aluminium alloy. The effect is a premium looking device with gently rounded edges, and tapered sides that give the illusion of a wedge shaped construction. Yes, it does look like a MacBook Air.

Strangely, it doesn’t feel like one. The metal is smooth and smart but does have an air of plastic about it. We’re not sure exactly why. Maybe it’s very thin? But the solidity and cool to the touch aspect of our office MacBook Air is missing from this device. This is no surprise as it costs about a quarter of the price of the Apple laptop, so that’s not really something to hold against it, and for the most part the Acer is a good looking machine that seems a cut above many of its rivals.

With dimensions of 340 x 236 x 17mm the device is reasonably compact and slim, with the 3.5lb weight making it something that wouldn’t kill your shoulders after a day of carrying it in your backpack.

The extra size of the body over its 11.6-inch rivals means there’s room for a large trackpad. We’re big fans of Chromebook trackpads in general, as their multi-touch support and smooth operation are always excellent, and this example doesn’t blot the copybook in any way.

The keyboard is another area of strength across the Chromebook range, and while the Acer layout is the standard, spacious one we’ve grown to expect, the key response does feel a little shallow at times, making it less precise than we’d like. It’s not bad, but it’s not quite up to the high standards we’ve seen in other Chromebooks.

Of course the 14in display is the big selling point of this device, so it’s a shame that the panel itself is little underwhelming. Running at a resolution of 1366 x 768 is the norm on Chromebooks, but the larger display makes this lack of pixel density more telling.

Text is slightly jagged around the edges, and in this age of HD smartphones and tablets this is less acceptable than it would have been only a year or two ago. That’s not to say it’s a deal-breaker by any means, and the aforementioned MacBook Air suffers from the same issue, but it’s worth mentioning.

A far more annoying problem is the viewing angles afforded by the display. Those who have used budget PCs before will know that you often have to tilt the screen several times until you find the optimum setting that doesn’t wash out the colours or make the display too dark. This was a constant fiddle we had with the Acer Chromebook 14, especially when watching video content online.

Again, it’s not something that can’t be lived with, and once you do find the right angle for the display it’s bright, has reasonable colours, and the bigger size is definitely a bonus when looking at busy websites, social media or YouTube. Plus the twin speakers under the chassis offer a decent amount of volume and tonal range.

Naturally there’s a headphone socket on the side of the machine if you prefer to keep your audio personal, and this is accompanied by two USB 3 ports, a HDMI output, and a security lock. Oddly there’s no SD card reader, which is disappointing as it’s a standard port on many Chromebooks, even smaller models. Still, the 100GB of free Google Drive storage offered with the Acer will soften the blow, and make up for the 16GB of internal storage.

A HD webcam with a wide field of view is a nice touch, allowing groups of friends to get in the shot a bit easier, and on the whole it performs well for video calls using Google’s Hangouts app.

Chromebooks are designed for general activities such as web browsing, social media, and email, so if your demands fall into this camp then the Acer will be a decent servant.

The Intel Celeron 1.6Ghz N3060 SoC may not be the fastest chip out there, but it can handle basic computing quite well. Including 2GB of RAM, rather than the 4GB found in a number of other Chromebooks, feels like a mistake though, and contributes to periodic slowness on the device.

Websites, even image heavy ones, load in quickly, and videos stream without any hiccups, but if you start to multitask it can become choppy. Navigating a website and clicking on links, will produce a stutter in any video or audio running in the background. It’s not tragic, but it’s there and can get irksome if you like to do more than one thing at a time. Gaming is also a challenge for the system, and probably best avoided, although this is often true with Chromebooks.

Running the Acer Chromebook 14 through the standard benchmark tests gave us scores of 638.50 in Sunspider, 50.335 in Jetstream, 101.09 in Basemark 3.0, 3679.9 in Kraken, and 8576 in Google’s Octane. This confirms our suspicions that the Acer is a decent performer, held back somewhat by the 2GB of RAM. With this in mind we’d strongly recommend moving up to the £279.99 version that comes with 4GB as standard.

One area where the Acer excels is that of battery life. In our standard HD movie loop test the device notched up an impressive 11 hours and 13 minutes, which is worthy of praise. It certainly means that the Acer would get you through a full working day without needing to hunt out a power socket.

Chromebooks run on Google’s ChromeOS, not Windows or Apple’s OSX, so there are a few things that you’ll need to adjust to if you head down this route. Firstly there are some applications that simply will not run on a Chromebook. iTunes is one, Adobe Photoshop is another, and of course none of the PC games will be making the journey over to this platform.

For all of these though there are working alternatives, such as Google Play Music, Spotify, a number of simple photo editors, and a wealth of other free apps that make Chromebooks a real, viable option for people who want a simple and reliable computer for general computing duties.

Google’s office suite – Docs, Sheets, Slides, and others – offers a usable alternative to Microsoft’s Office, although you can still access the online version of the latter on a Chromebook. The announcement recently that Android apps will now run on ChromeOS opens up the possibilities even further, and we think the platform is in very good shape right now.

In use ChromeOS is in essence a browser, just like Chrome on Windows or OSX, but with some useful shortcuts and multitouch gestures that make navigating the basic OS a fluid experience.

Viruses are not a concern, and if you were looking to buy a computer for a relative or child who isn’t particularly technically advanced then we’d recommend Chromebooks as a great place to start. The real advantage is that if they move onto a new machine after a while all they have to do is log in with their Goolge ID and everything on will appear magically and be in exactly the same as it was on the previous device.