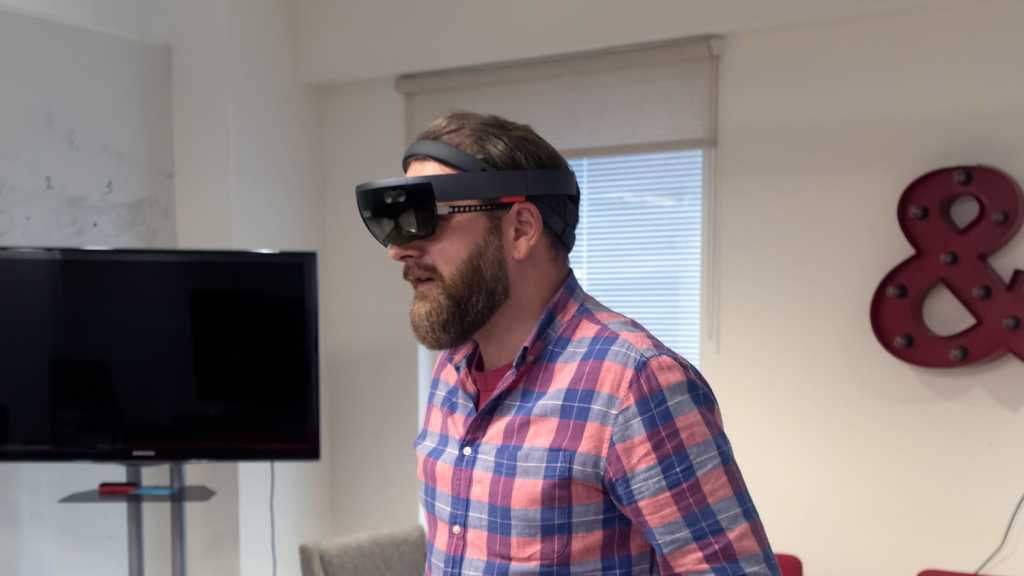 The HoloLens offers a tantalising version of future AR experiences. However, before it’s ready for primetime, it’s going to take concerted effort on the part of Microsoft to upgrade the hardware and developers to explore how best to make games and apps for it. But once we’re there, it’s going to be amazing.

This HoloLens is not for you.

It’s for the people who will create the apps that you’ll use whenever an upgraded home version is released, a V2 or V3 that’ll live up to the promise of the concept and likely cost the same as VR kit like the Oculus Rift or the HTC Vive.

If you do get to use this HoloLens, it’ll be in a theme-park-style setting – just as I got to try the modern generation of VR properly for the first time at a Game of Thrones experience, part of an exhibition dedicated to the TV show at the SXSW festival in Austin, Texas. You’ll queue to go into room and play a game that’s half-real, half-digital and limited by the constraints of the HoloLens hardware – and how good your experience is will be up to the skills of the game’s designer.

(Also, if you’re a medic or an engineer or create visual effects for the likes of GoT, there are specific applications for you – and if you are, or you’re interested in creating apps for the HoloLens, read my story tailored for you on Digital Arts.)

But for most people who are interested in combining VR with the real-world, I’m afraid you’re going to have to wait. 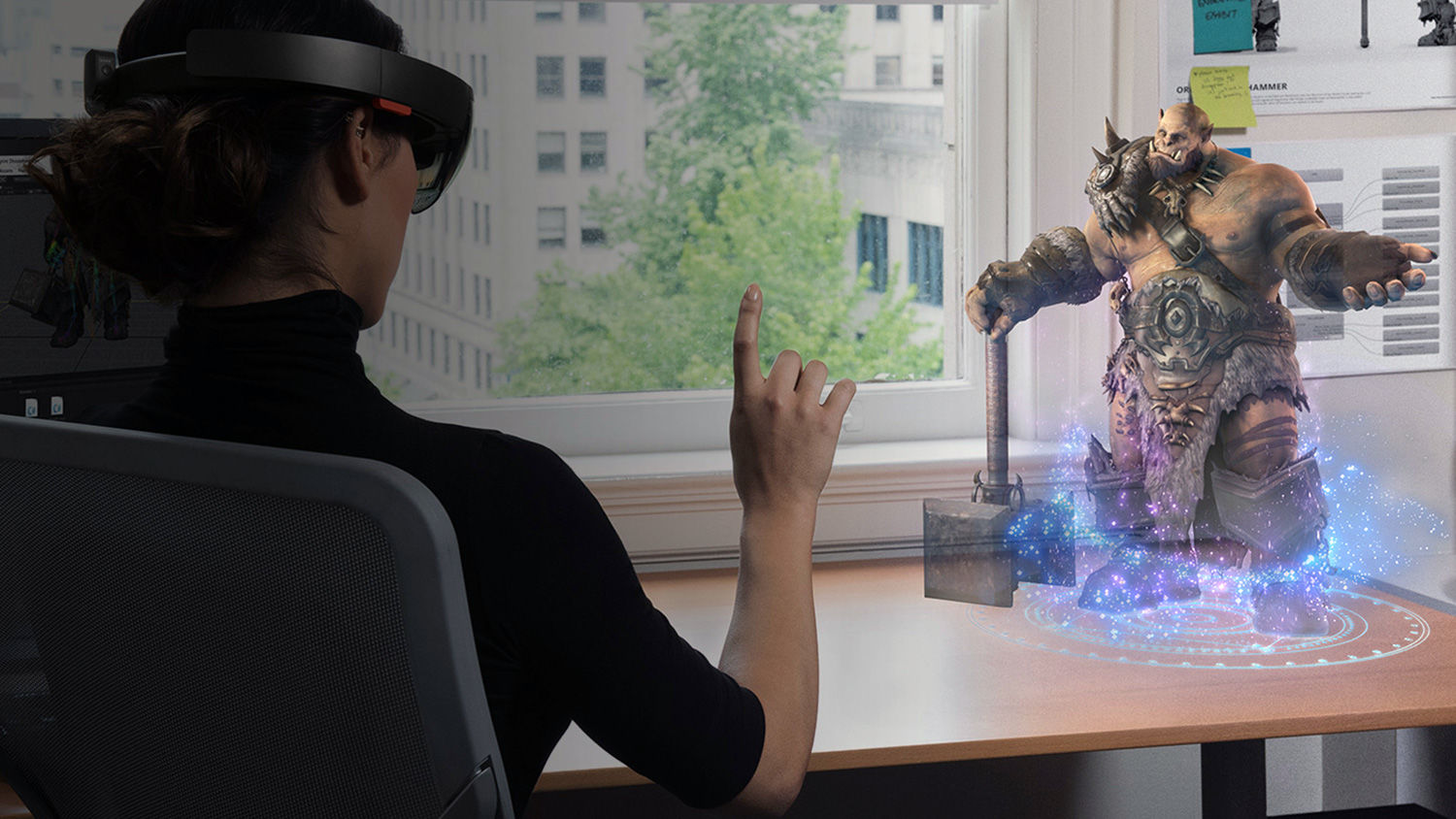 Before I get to try the device at Microsoft’s Lift Studios in London – a product demo and recording studio done up like a designer home/office – MS’s director of product marketing Leila Martine is very keen to stress this point. It’s the HoloLens Developer Edition, she says, very much emphasising the word ‘Developer’.

It’s clear Microsoft doesn’t want this product judged as a consumer product. Having the media treating a developer-focussed, essentially ‘open beta’, product as ready for home use is what put paid to something else that combined the real and the digital – Google Glass.

When the the HoloLens was placed in my head, it fitted comfortably. There’s space at the front even for my ‘yes I run a design magazine website’ glasses, and you fit it down the size of your head using a bike-helmet-style wheel on the back. It’s not uncomfortably heavy either, and I could have worn it for an hour without issue. 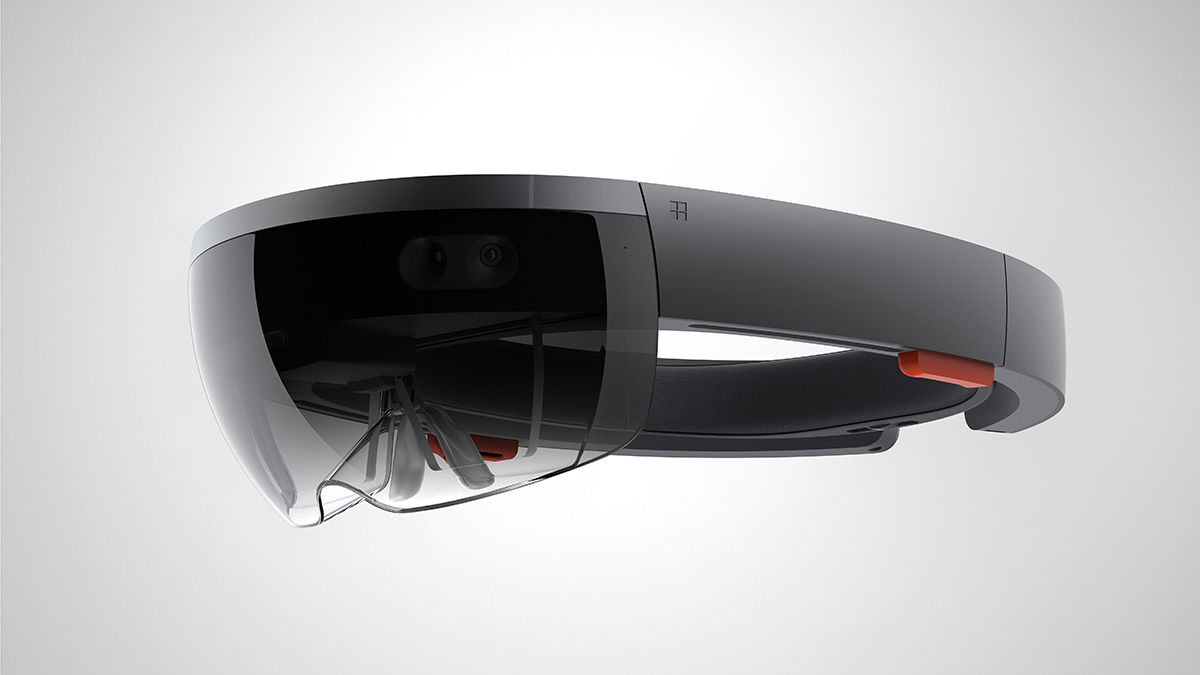 At the top of the front of the HoloLens are four cameras that map out the space around you and turn it into a 3D model that the software can understand. Below this are the two lenses – miniature transparent screens that the HoloLens can add the pixels that make up the objects and characters and floating video screens (or whatever). What’s added to these screens is subtly different to allow for your eyes being next to each other – giving the illusion of 3D. The resulting images are pleasingly solid, if obviously computer-generated.

Here we also encounter this HoloLens’ major restriction. The screens take up between a half and two-thirds of the area of your vision. Anything outside this central horizontal rectangle is cut off.

In an environment where the experience’s creator has built both real and digital elements – a haunted house or a ‘room-escape’ experience – this restriction could be accommodated into the game. The game’s designer could put a noticeable ring around the edge of the ‘screen’ and make it part of the its universe – a digital Sherlockian ‘double’ monocle or a scanning device from CSI to help you track down clues or retrace events.

But where the digital elements are as much a part of the game or experience’s world as you are – whether the Roboraid aliens-come-through-your-front-room-wall game Microsoft demoed last year to the freakish survival horror that currently (thankfully) lives only in Charlie Brooker’s imagination ( Episode 2, Playtest from the new series of Black Mirror) – this breaks the immersion, as things just stop mid-air. 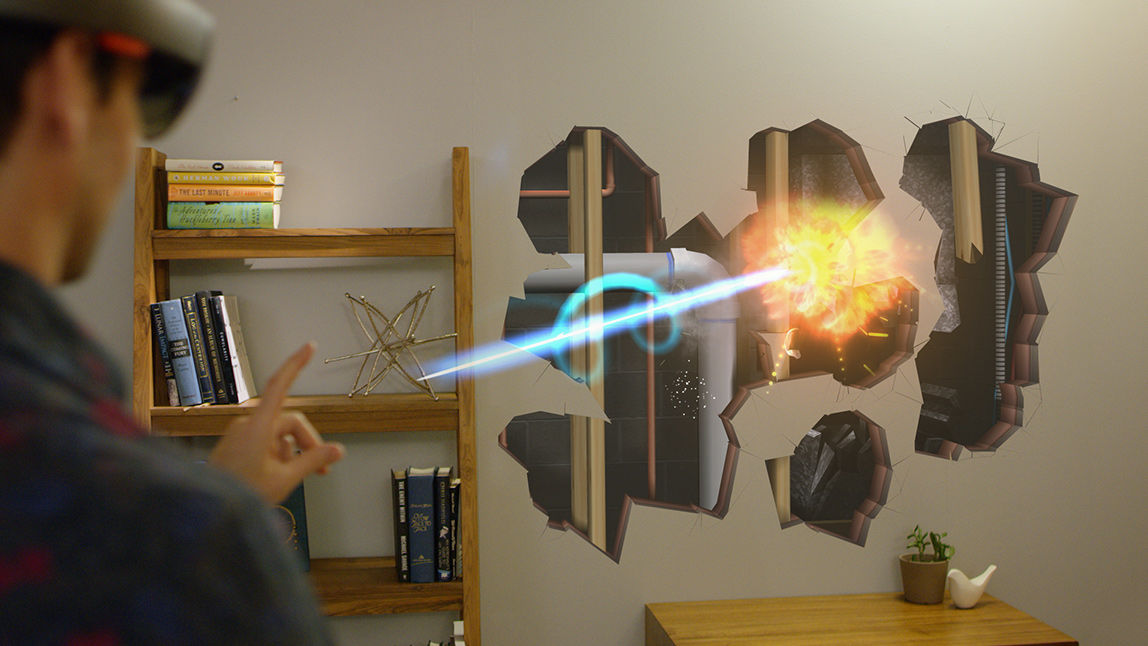 The small field of view is something that needs to worked on in the development of the hardware itself. It’s a similar issue to the low-resolution screens in the first Oculus Rift Development Kit that could make it feel slightly underwhelming – and can be fixed in a similar way, by developing more powerful hardware.

(You also can’t use it outside – or in the dark – as the hardware needs a room to map. So an AR version of the Six Flags Superman VR rollercoaster isn’t going to happen any time soon.)

I tried four HoloLens experiences, ranging from the educational to the silly. Three were essentially tech demos – quick thrills not experiences you’d invest time in (or necessarily return to). One showed the internal workings of a watch as an in-store experience designed to impress people who might drop quite a few thousand pounds on a luxury watch.

More delightful was a starfield that, when you turned around, revealed a solid-looking animated model of the Solar System with planets gracefully circling the sun.

Actiongrams lets you put 3D models of characters from zombies to celebrities in your front room. I placed a T-Rex on the floor, who roared at me more menacingly than you’d expect from something that’s looks more like Rex from Toy Story than something from Jurassic Park – showing that HoloLens has serious potential for scary experiences once developers get a handle on designing games for it.

To control the experiences, you use a very limited set of gestures (which have to be in the HoloLens cameras’ field of view). 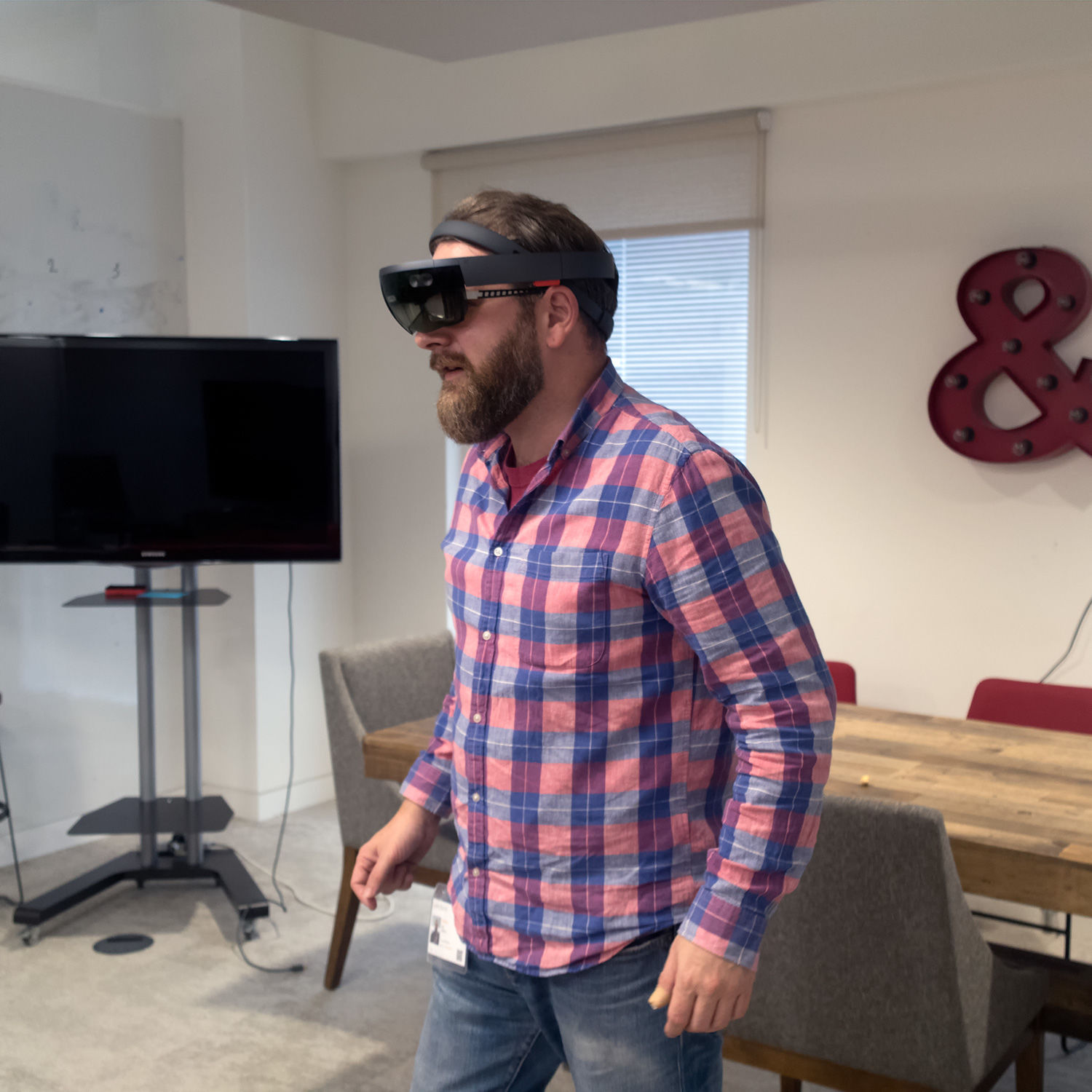 A theatrical pinching motion selects thing. Hold the pinch and move your hand, it you can drag what you’ve selected. 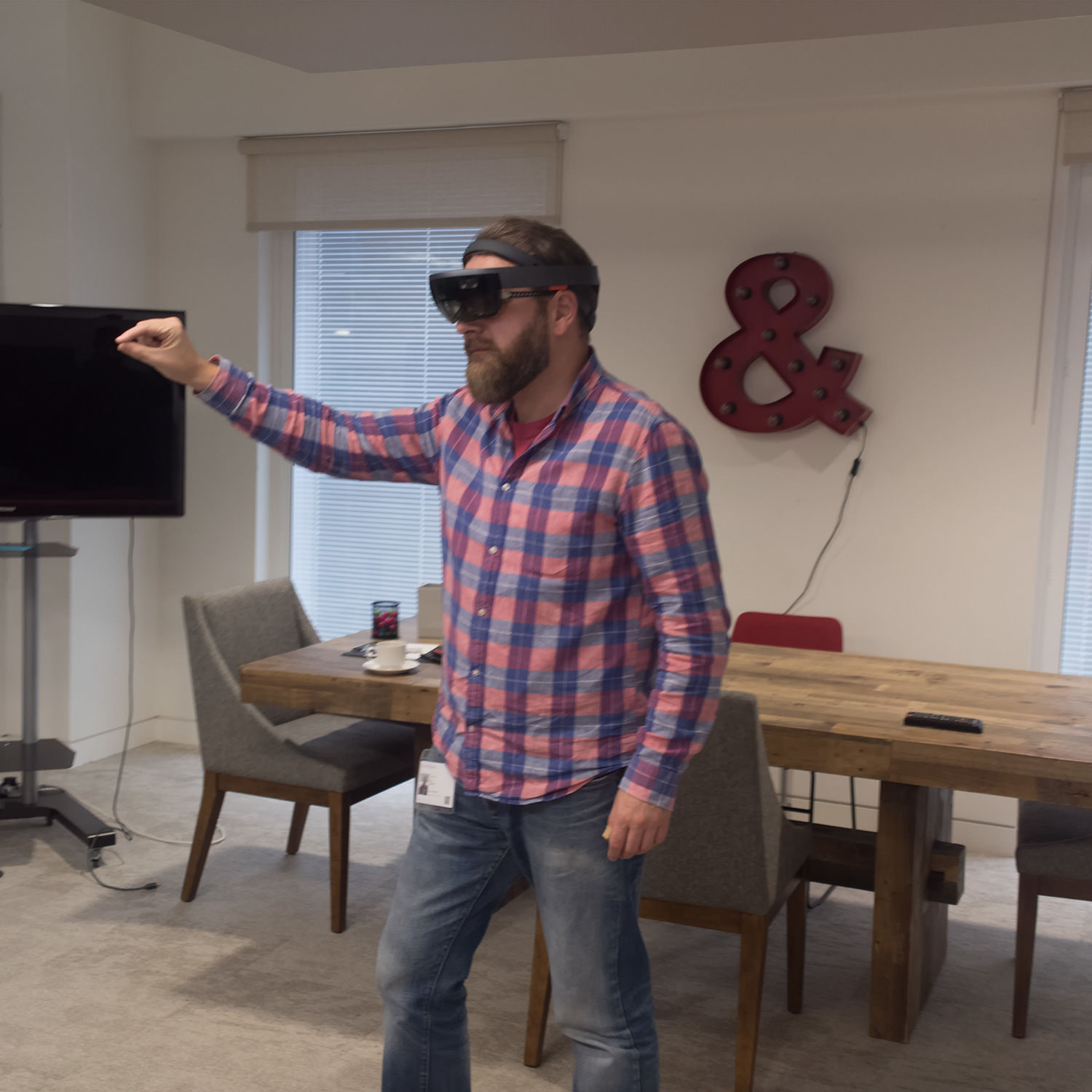 Release the pinch and you’ve let that go. It’s hardly a Kinect.

(However, developers from advertising agency Razorfish have created a research project that combines HoloLens and Kinect – and the results sound intriguing).

The one experience with depth was aimed at medical students. Created with a US university’s school of medicine, the app puts a full-sized human body in front of you. Pinches remove the skin in layers and then muscle to reveal the skeleton. I watched half a human heart beat from both outside and inside. I learned to tell different fracture types apart that would be difficult with a 2D picture.

You can see more about this in the video below.

If that sounds gross, it’s not. It’s far too clinical for that. But if this concept was turned into a holographic version of Surgeon Simulator, that would be horrific (and a lot of fun too, I’m guessing).

This experience aside, it seem very much that we’re still in the ‘fart app’ stage of the HoloLens – but then computers, phones, tablets and VR all went through that before experimentation and refinement produced the apps you love. And prototyping apps for the HoloLens is simpler than you might think, as developers can use a special (beta) version of the Unity game design app/engine that they know already – as it used to develop many mobile games.

The HoloLens has a two-hour battery life and takes about the same to charge – and you can use it while it’s plugged into the charger (if you were using it at your desk to check out 3D models you’d designed for a feature film, for example). This is probably one of the current specs that won’t really need upgrading for the home version. 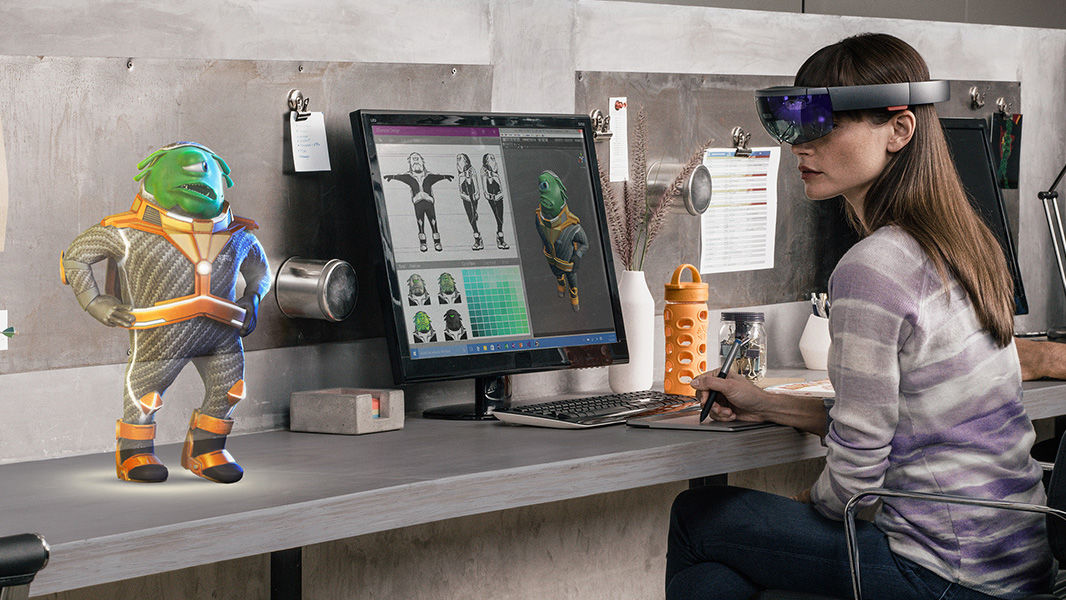