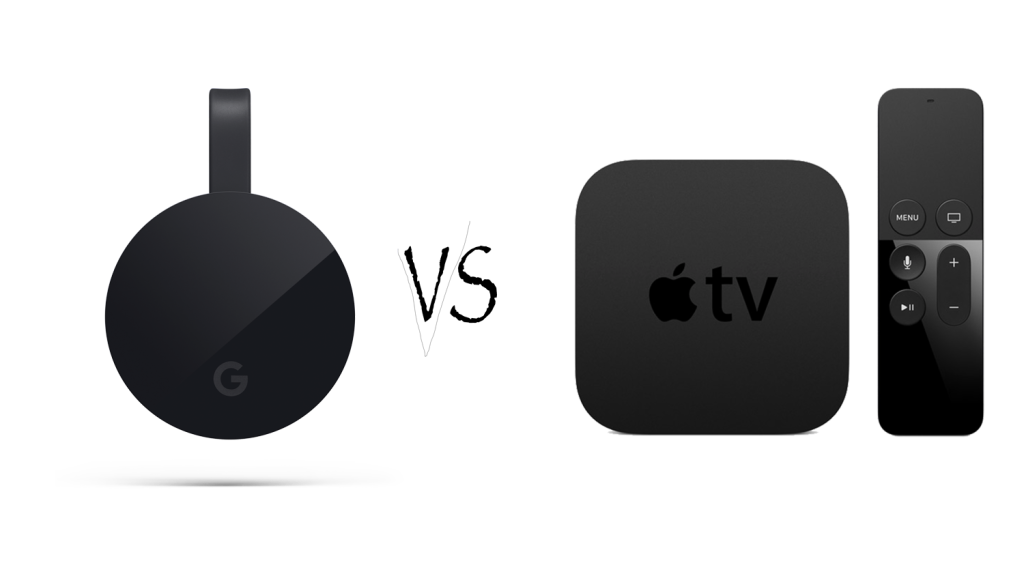 These two offerings seem to occupy different camps. If you want an all in one unit to watch TV and movies on, one that has a traditional interface and controller, then the Apple TV is a solid choice. But the lack of catch-up TV will be a drawback for some, and the price will definitely be an issue for many despite 4K support. Google’s Chromecast isn’t as cheap as previously but it’s still very affordable for a 4K streamer – you can buy two with plenty of change left over compared to Apple’s equivalent. Not having a remote or interface is a downside for some but the range of supported apps and services is excellent.

Media streaming is fast becoming all about 4K and we’ve reached a point where both Google and Apple offer Ultra HD compatible devices, but couldn’t be much more different. Choosing one isn’t easy so here is our Chromecast Ultra vs Apple TV comparison review

Previous Chromecast models have always been reasonably cheap in comparison to the bigger set-top box devices. In fact you can still buy the Chromecast 2 for £30 from Argos. With the release of the Chromecast Ultra Google has raised the price tag to £69.

On 12 September Apple announced a new generation of the Apple TV that supports 4K HDR playback, which is now officially on sale. Like it’s predecessor, it comes in either 32- or 64GB models priced at £179 and £199.

Those looking for other streaming devices can opt for the Amazon Fire TV stick (£35) or its bigger 4K UHD compatible brother the Amazon Fire TV (£79). Roku is also a favourite in this area, with the Roku Streaming Stick (£39) and Roku 3 box (£79) offering 1080p playback and a wealth of channels.

Consoles are also now a good way to consume media through your TV, with the main players coming with an array of apps for the likes of Netflix, NowTV, Amazon Prime, Google Play Movies, and YouTube.

The Chromecast Ultra is a streaming stick, in that you plug it directly into the HDMI port in the back of your television set and wirelessly stream content.

Google has also added the option this time of plugging an ethernet cable into the power supply if you’d prefer a wired connection, which might be advisable if you’re planning on watching 4K UHD content and you don’t have great Wi-Fi.

Google hasn’t released much in the way of technical specifications for the device, but we do know that it is nearly twice as fast as the previous model and supports 4K video with HDR.

By contrast the Apple TV is a small set-top box that can easily fit into any media centre or even be mounted to the back of a TV set with a number of third-party brackets. The dimensions of 100 x 100 x 33mm make the unit compact and the matt black plastic case is sturdy and unobtrusive.

Turning the device around reveals a small selection of connections which include ones for HDMI (but sadly no cable supplied in the box), Ethernet, USB-C for system restores, and power. There’s no optical output for audio, but the Apple TV does support Bluetooth headphones and speakers.

It’s worth noting that the 4K model has HDMI 2.0, Gigabit Ethernet and loses the USB-C port. It also has dual-band Wi-Fi and Bluetooth 5.0.

Inside the device is a 64-bit A8 chip, just like you’d find in an iPhone 6, 6 Plus, and the iPad Mini 4. This gives the Apple TV smooth performance and enough power for any media activities.

It’s a little disappointing though that the device tops out at 1080p, rather than 4K, so if you’re looking for Ultra High Definition you might want to favour the Chromecast Ultra.

You’ll have to get the new Apple TV 4K for that, which is powered by a newer A10X Fusion chip to processor it’s advanced features. As mentioned earlier, it has 32- or 64GB of storage while the older model now just comes in the smaller capacity.

Everything on the Apple TV is controlled via either an iOS device or the included Siri Remote. The latter, as the name suggest, offers voice control for the interface, and there’s also a touchpad area at the top for those moments when the buttons just won’t do.

Chromecasts don’t have an interface as such, or remote control, as the idea is that you look for content on your phone, tablet or PC, then cast it to your TV.

This is achieved by pressing the Chromecast button found on compatible apps, which include most of the big ones in the UK such as Netflix, YouTube, Google Play Movies, iPlayer, BBC Sport, BT Sport, All 4, and Spotify.

The main selling point of the Chromecast Ultra is obviously its 4K UHD streaming ability, at it’s affordable price point.

Apple was lagging behind until it announced the Apple TV 4K with the Amazon Fire TV 4K one of the only other streamers with the feature.

It’s not only streaming services that the Chromecast Ultra can send to your TV, there’s also the option to mirror the screen on your Android phone or tablet.

This neat feature means you can show pictures, games, websites, or any other content on the biggest screen in the house. The Ultra can also act as a photo gallery screen saver for when you’re not watching content.

Apple takes a different approach with a dedicated user interface that has a variety of apps for media, games, and music. Navigation is controlled by swiping on the touchpad section of the remote, and the Siri integration means that you can search a number of apps by voice commands.

Perhaps the most useful of all the Siri tricks is when you’re watching video content and you miss something on-screen. Simply announce to the controller ‘what did they say?’ and it will rewind the video by 10 seconds and display the subtitles. Brilliant idea.

The on-board storage is for additional apps, there are a huge number in the App store, which also include games. Apple have included an accelerometer in the Siri Remote so you can use it Wii-style to control characters on the screen.

It’s a good feature, and there is also a number of bluetooth gamepad controllers now available that can take things up a level. Although to be honest if you’re looking at an Apple TV as a media and games machine, then maybe waiting for deal on an Xbox One or PS4 might be a better option.

The range of apps available for media content is decent, but not amazing. The ubiquitous Netflix app is there, as is NowTV, iPlayer, YouTube, and a host of others, plus you can watch and listen to anything you’ve bought on the iTunes store, but UK users don’t have much in the way of Catch-up TV support. ITV Player, 5OD, and All 4 are missing, although 4 News is available.

Much like on the Chromecast Ultra you can also send content from your phone to the screen, using Apple’s AirPlay technology, and this includes mirroring the display on your iPhone, iPad, or Mac.