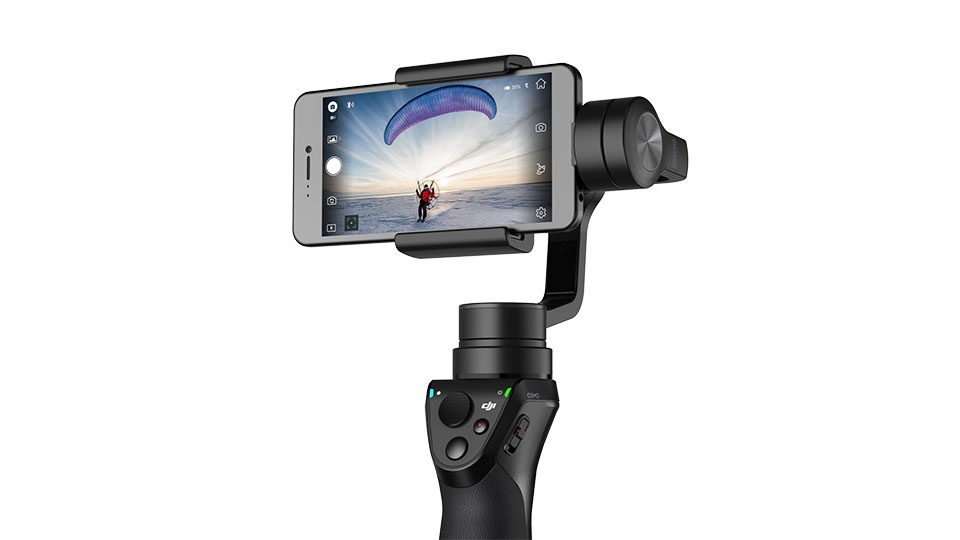 The Osmo Mobile is perfect if you use your phone to make home videos and want to make them look more professional, or for vloggers that want to do the same. It performs well and isn’t ridiculously expensive, although if you already have a phone with good optical stabilisation you may not see a massive improvement in some shots. Of course, it’s important to remember that video quality is only as good as your phone’s camera.

Smartphone cameras get better each year and the very best are capable of capturing excellent photos and videos. Some even have optical stabilisation, which gives much less jerky video when panning or walking. But none compares to mounting your phone in a three-axis gimbal such as the DJI Osmo Mobile.

Just like the gimbals on its drones (such as the new Mavic Pro) the Osmo’s gimbal is able to rotate in three axes and keep your phone pointing in exactly the same direction even while you walk around.

It also eliminates shaky hands and – once you’ve got the hang of using it – can produce amazingly cinematic shots which people won’t believe were taken on a phone.

You can buy the Osmo Mobile from Heliguy for £319. That may sound expensive, but when you consider that the Osmo (which has its own 4K camera) costs £519, it’s a decent saving. Note that UK prices were increased in November 2016 due to changes in exchange rate – it was originally £289.

The Osmo Mobile works with iPhones and Android phones which are between 589 – 85mm wide. To give that context, the iPhone 6 Plus (and the iPhone 7 Plus) are 80mm wide, so most phones with screens up to 5.7in should fit fine. 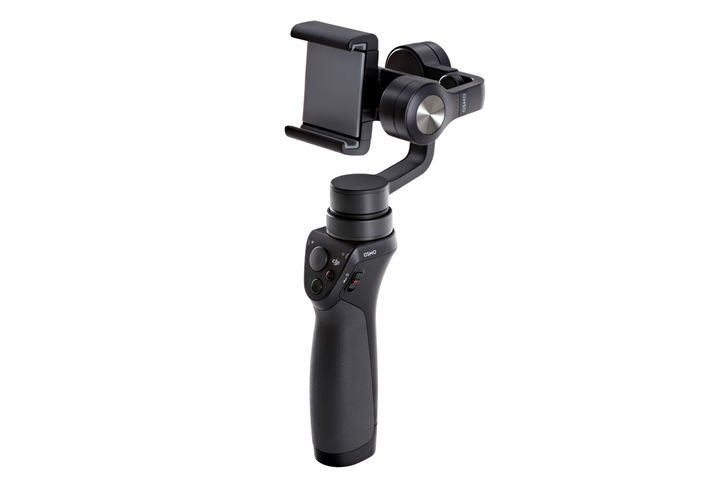 The limitation of iPhone and Android is simply because it requires you to use the DJI GO app which is only available on those platforms. And the need to use the app is down to the fact that this is what you’ll use as your camera app to record video and photos. Plus, without the app, you can’t use the Osmo’s buttons to start and stop video recording or take a photo, or use the trigger to keep the gimbal in a certain orientation (it has other functions too).

Without a phone the Mobile weighs 500g. It can get a bit weighty for long sessions, but there are various accessories available such as a base for table use (£7) and an extension pole (£43).

You’re not limited to using the Osmo upright. You can hold it horizontally like a torch, or even upside down for a low point of view.

Build quality is excellent, and there’s some adjustment if your phone doesn’t balance well in the mount. A large dial on the back allows you to quickly clamp and unclamp your phone, and rubber inserts keep it tightly in place. We found we could use an iPhone in its case, but depending on your phone and exact case, you might have to remove it to use the Osmo.

Although the handle is essentially the same as the more expensive versions of the Osmo – it even has the same mounting point where a phone would normally be attached as a viewfinder – the Zenmuse M1 gimbal is not removable. 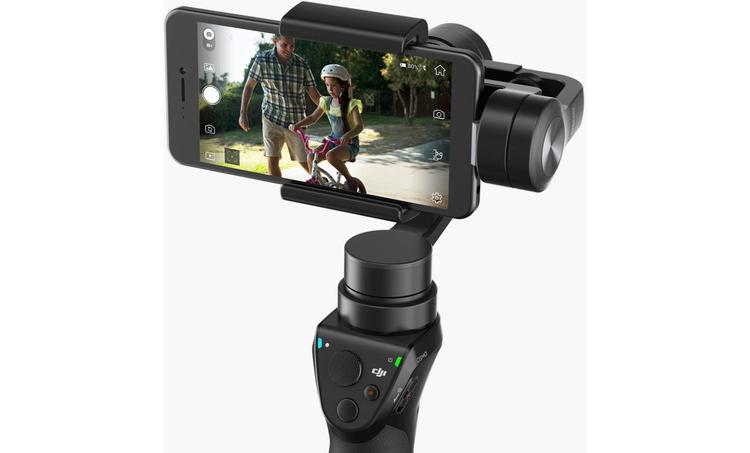 One of the benefits of the pricier Osmo models is that you can remove the gimbal (and camera) and upgrade it in the future. In theory you shouldn’t need to do this with the Mobile version as you can use your new phone in it when you upgrade. It doesn’t have Wi-Fi either – just Bluetooth.

The DJI GO app will be familiar to anyone who owns one of DJI’s drones, but the interface is much simpler when you connect an Osmo, because it’s really just a camera app.

You can dive into the settings to calibrate the gimbal and minutely adjust gimbal roll to ensure the horizon is level, and you can choose how the joystick works, reversing the direction if the default of up-to-tilt-upwards isn’t intuitive for you. You can also limit the gimbal to moving in only certain directions.

Using the app you can also shoot time-lapse video and panoramas. With the former, the gimbal will smoothly (and very slowly) move between two points, so it’s best to mount it rather than holding it, and the latter automatically rotates the phone and takes nine photos and stitches them together for a wide, high-resolution photo. 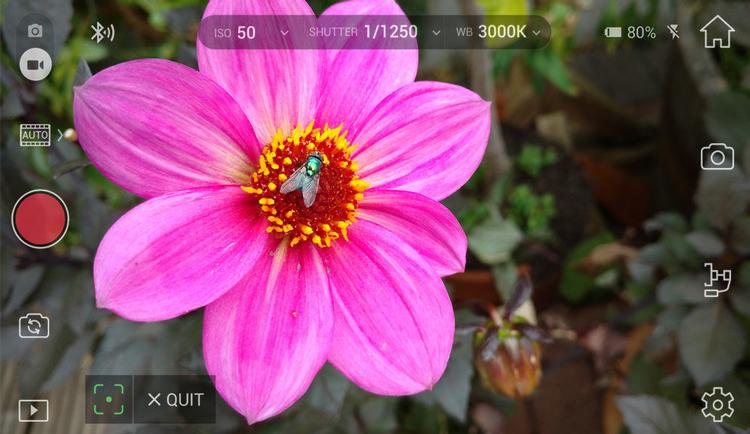 It’s possible to use your phone in portrait mode and take photos (this works well with the panorama feature), and a triple-press of the trigger button puts it into selfie mode, where the rear of the phone faces you – this is because the rear camera tends to take higher-quality photos.

You can also use the stabilisation to take long-exposure photos, although we didn’t get a chance to try that in our short time with the Mobile.

What we can say is that when we used it with an iPhone 7 at a wedding, it produced wonderfully smooth footage. We certainly didn’t see any problems due to the iPhone 7 having optical stabilisation of its own.

Plus, footage was considerably more stable and cinematic than when simply holding the phone in our hands and trying to be as smooth as possible. In our experience, optical stabilisation is no substitute for a proper gimbal.

Of course, there are other tricks which make the Osmo worth its price (and the hassle of using it compared to just whipping your phone out of your pocket and shooting). One of these is ActiveTrack, a feature Phantom 4 owners will be familiar with. You draw a rectangle around someone (or just their face) and the Osmo will follow them and attempt to keep them centred in the frame.

It works well, until you move (or they move) too fast. It’s great if you’re videoing someone making a speech, but less so when you’re trying to film kids darting around.

Another ‘trick’ is holding down the trigger to keep the gimbal in place. This is perfect for tracking shots and with a little practice really makes it look like your phone was on a dolly.