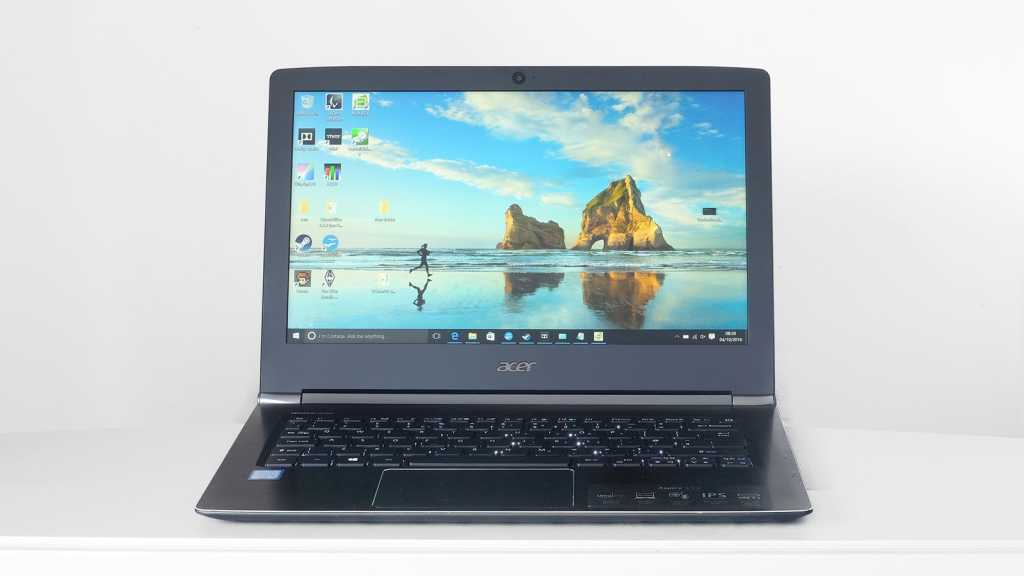 Windows is back with a bang this year. Laptops like the Acer S 13 offer a low-cost alternative to Apple machines, with comparable stamina and portability at a little over half the price. Typical of Acer, the look is a little quirky, and we imagine some of you may prefer the all-aluminium style of the Asus ZenBook range. However, the Acer S 13 combines good keyboard quality, excellent battery life, a good screen and Intel’s Core i-series processors, and that quartet is hard to beat. This is one of the best mid-price ultra-portable laptops around.

The Acer S 13 is an ultrabook for normal people. And by that we mean people who still get a little shock when they see the price of a MacBook Air or, for example, the lovely-but-expensive £1299 HP Spectre 13. See also: Best laptops to buy right now

Like the Asus ZenBook UX310UA or Dell Inspiron 13 5000, the Acer S 13 is a more affordable alternative to these wallet-busters. Aside from some cheaper parts to the build and a typically quirky trackpad, there are no parts that make it a lesser machine day-to-day than one of the much pricier alternatives. It’s a smash.

If you can afford a bit more, consider the more common Core i5 version. It costs £ 699 from Amazon and is available for slightly less online.

Its other upgrade is a 256GB SSD, which gives you much more storage to play with. The cheaper version we’re using is perfectly good for most uses, though.

The Acer S 13 does its best not to look like a copy of a MacBook, or one of the other popular ultrabook lines. It has an embossed ‘ridged’ plastic lid, offset by a silvery hinge that gives it a recognisable two-tone style.

Its underside is plastic too, and the use of plastic rather than aluminium or glass is one way Acer keeps the S 13’s price accessible.

The laptop does have some parts that feel much more like a pricier machine, though. Its keyboard surround is aluminium, with a brushed finish that’s cut around its edges to reveal the shiny aluminium underneath. It’s lovely.

While you actually use the Acer S 13, it feels like an ultra-premium machine. It’s only when you finishing working you’re reminded this is really a mid-range laptop.

Its plastic parts still feel nice, though. They use a soft-touch finish for an extra tactile edge.

The Acer S 13’s keyboard has the rigidity than some laptops of this type lack too. It’s far stiffer than the Asus ZenBook UX360CA’s. While you tap away, it seems there really is no build quality compromise at all.

The main reason to want a laptop like the Acer S 13, though, is that it’s so slim and light. It weighs 1.3kg (1326g according to our scales) and is only 15mm thick, the perfect size to use for work trips, or if you want a laptop you can carry around all day, every day.

It has very versatile connectivity too. Acer has done its best to please just about everyone, packing-in a wide array of inputs in a very slim laptop.

The ones occasionally left out of slimmer laptops are the full-size HDMI and full-size SD card slot. These are important if you want something to act as your main computer, particularly if you’re a keen photographer.

Other connectors include two USB 3.0 ports and a single USB-C 3.1 port. This is the latest laptop socket, gradually being used in more and more phones aside from iPhones, which use Apple’s own Lightning connector.

We’ve already noted the Acer S 13 feels like a high-end laptop as you’re using it. Part of this is down to the fairly rigid aluminium keyboard surround. The keyboard itself is very nice too, though.

Its key depth is a little shallow, but the action is satisfying, a just-right mix of crispness and resistance. Once you get away from flat-out bad keyboards, the feel of them is quite subjective. But we like this one.

Its layout is very similar to that of a MacBook, particularly in the shape and size of its Ctrl and Fn keys.

The Acer S 13 also has a cool blue keyboard backlight, one with two intensity settings to make the light less distracting. This is an ‘advanced’ feature not seen in every £500 laptop.

Its trackpad takes a bit of getting used to, though. It suffers from a fairly common Windows laptop problem, that its button layout feels less intuitive than that of a MacBook.

Like almost all style laptops, the buttons are built into the pad. The right mouse button zone takes up half the width and about a third of the pad’s height, and compared with a MacBook or one of the HP Envy style laptops (which use more dynamic button spacing), it’s a bit easy to accidentally press the right button until you get used to it.

If you like you can turn off the right button zone, though, giving the Acer S 13 a completely MacBook-like pad where you just use a two-finger press to use the right button. Using this mode you can leap-frog over the button awkwardness, and the pad otherwise feels great. Its friction is perfect thanks to what feels like a frosted glass surface, and the click mechanism is solid: not too deep, not too hard to press.

After a tweak or two the Acer S 13 has a top-quality keyboard and pad combo.

The Acer S 13’s screen is strong too. It’s a 13.3in IPS LCD panel with a matt finish, the kind well-suited to use outdoors or in offices where strip lighting might cause lots of nasty screen reflections in a glossy display. Acer calls it ComfyView.

Its resolution is 1920 x 1080 pixels, which looks fairly sharp across 13 inches. Asus offers an even sharper display in the Asus ZenBook UX310UA, which looks sharp even when you look pretty close to the display.

This is a solid all-round performer, though, with good colour coverage at the price. It hits 85.7 percent of sRGB, although we did find that it has a noticeable blue/green emphasis that you might find less pleasing than a neutral or slightly warm tone. Windows 10 lets you tweak this with its inbuilt calibration tools if you don’t like its look, mind.

The rival ZenBook UX310UA is better for colour and resolution, but the Acer S 13 is the clear winner for contrast and black level, with 1005:1 contrast. You won’t notice the benefit too much in a well-lit room, but in a dim or dark room movies will look punchier here than on the ZenBook, whose 409:1 contrast leaves blacks looking a bit grey.

With max brightness of 345cd/m2, the Acer S 13 also has enough backlight power to handle fairly bright sunlight. A glossy display looks fancier, but a screen like this is almost unbeatable for pure practicality, and its image quality is very solid.

There are two main models of the Acer S 13 in the UK, one with an Intel Core i3 CPU and another with a Core i5. Acer sent us the lower-end version, which uses the Core i3-6100U model. It has two cores, clocked at 2.3GHz.

The main difference between this and the i5-6200U, the model up, is that the Core i3 does not have a turbo boost. This increases the clock speed when more power is needed.

Of course, as the Acer S 13 won’t need to use this a lot of the time, and day-to-day performance feels great here even with what sounds like a low-end CPU. In Geekbench 4 it scores 5535, which is lower than the score of a Core i5-6200U machine, but not dramatically so. Similarly, the PC Mark 8 score is 2040: just a bit lower than a rival Core i5.

It doesn’t hugely affect gaming performance in most titles either, as the Core i3 still uses an Intel HD 520-variant graphics chipset like most of the other Skylake CPUs. With an integrated chipset like this, it will almost always be the performance bottleneck.

Like any laptop with integrated graphics, this is not a great gaming machine, but it will handle some older titles. Thief at 720p, low graphics settings runs at 20.4fps, for example. That’s just about playable if your standards aren’t too high, although the frame rate drops to a dismal 5.1fps when you increase the resolution to 1080p and turn the visuals up.

While gamers will still want a discrete graphics card, you’ll be able to play older console-grade games on the Acer S 13 well enough. Skyrim runs fine at Low settings (at 1080p) for example, and titles like Dragon Age: Origins and Dead Space will too. Stick to games five years old and you can have a lot of fun.

If you’re going to be performing lots of video encoding or editing, or involved processing of lots of massive image files in Photoshop or Lightroom, you’ll benefit from the punchier Core i5 Acer S 13. However, its main benefit for a lot of people will be its chunkier SSD.

The version we’re reviewing has a 128GB SSD, which is very easy to fill as soon as you install a few games or data-hungry apps. A 256GB SSD comes with the Core i5 version, which we find a much more comfortable amount of storage for an everyday machine.

This laptop is a reminder that Intel’s Core i3s are really quite good, even though mid-range machines tend to favour the i5.

Unlike some Core i-series laptops, the Acer S 13 is silent a lot of the time too, as the fan only kicks in when needed. The fan isn’t particularly loud, but it is a little high-pitch, making its tone a bit more obvious in quiet rooms.

Heat handling is rather good too. It stays fairly cool with normal use, and the underside warmth caused by gaming dissipates pretty quickly given the light touch cooling system, which seems to rely on passive-cooling heatsinks for the most part.

Over the last year we’ve seen most manufacturers have a crack at making their laptop speakers sound much more loud and powerful. The Acer S 13’s main improvement is volume. Its two little drivers that sit to each side of the laptop’s bottom can go rather loud, and the preinstalled Dolby Audio app offers a few different modes that tweak the tone and help dramatically increase the perception of ‘loudness’.

At maximum volume some audio can cause distortion and the tone at times takes on a hard edge, but you can combat this by making your own Dolby Audio custom setting if it starts to offend your ears. There are bassier, more refined-sounding laptop speakers out there, but we’re largely happy with the Acer S 13’s units. It’s comparable with that of more expensive machines.

We are quite surprised by how well the Acer S 13 lasts away from its power adapter too. It has a 4030mAh battery, locked into the frame, that lasts for almost exactly 10 hours of 720p video playback at 120cd/m2 screen brightness. That’s with the display at 40-odd per cent power.

We’ve used the laptop out and about as our usual work machine a few times and it sails through a day’s light work, particularly as the matt screen lets you keep the brightness very low in most conditions.

Acer’s own claims for the laptop vary between 11 and 13 hours depending on which Acer page you read. While you’ll only get those sorts of figures with very limited use at very low screen brightness, we can’t imagine too many complaining when its real life performance is so solid.