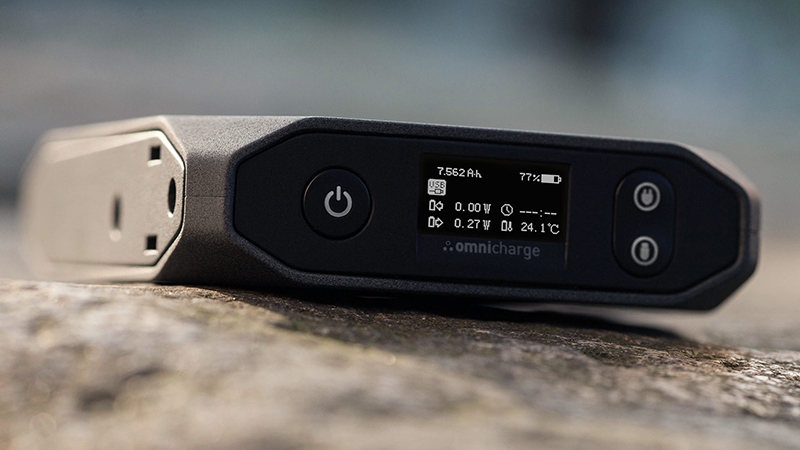 Charge it from anything and charge anything with it, the Omnicharge is one of the smartest and the best power banks we’ve seen. There are cheaper and more compact power banks on the market, but none that work so intelligently and keep you as well informed every step of the way.

The Omnicharge power bank is an Indiegogo project expected to ship in November. We were lucky enough to get our hands on an early press sample from Omnicharge, and this is easily one of the best power banks we’ve ever tested. Also see: Best power banks 2018

If you buy the Pro version two $20 (£16.08) upgrades let you add on Qi wireless charging or convert the DC input so it also works as an output, and the latter should be particularly attractive to photographers.

The Standard model is a 13,600mAh power bank with a maximum 65W output, while the Pro version offers 20,400mAh of power and a 100W output. For the money you’ll pay you could get around five or six similar-capacity power banks, but there are several reasons to choose the Omnicharge over those no-frills models. Also see: How to charge your phone’s battery faster

The first thing to note is that the Omnicharge has a very high energy efficiency rating of 90 percent, which means you’ll get more full charges for your phone or other device out of this power bank than you would any other 13,600mAh power bank. Roughly 12,240mAh will be available to your devices, so you simply divide that by your device’s battery capacity to work out how many full charges you’ll get.

Actually the Omnicharge removes a lot of the hassle of working out how much power you have left, with an OLED screen that displays a wealth of information. There are no basic LED indicators here. The display reveals to which output you are connected (AC/DC or USB, and you can use the physical buttons to the side to turn on or off either output), plus how much power is flowing to and from the device – the Omnicharge supports passthrough charging, allowing you to charge both it and connected devices at once. Unlike many other power banks, though, it can do both at full-speed, and won’t prioritise one over the other. See all power bank reviews

Whereas many power banks profess to use clever technology that works out exactly how much power your device requires and to then deliver the optimal amount, here you can actually see that in action, with the number of Watts output reducing as the battery becomes increasingly full to avoid damage. This meant we could also see that once our Galaxy S6 had finished charging the Omnicharge continued to trickle-charge it at around 1.5W, so to conserve power you’ll need to unplug your devices once they have finished charging.

There’s not only a battery icon that shows you at a glance how much power remains, but also a percentage indicator and a Wh countdown. Another countdown timer reveals how much longer the Omnicharge can continue at the current rate, and there’s a temperature gauge (plus built-in safeguards) so you needn’t worry about the power bank overheating.

Once the battery has depleted, rather than using a Micro-USB or USB-C connector to refill the device the Omnicharge has a proper DC input. When connected to the mains with the supplied adaptor the entire battery can be refilled in just a couple of hours. We also received a DC-to-USB adaptor in the box that lets you fill it up using a standard USB charger.

Omnicharge says this power bank supports universal charging from any source, whether that be an an AC adaptor, a solar panel, a laptop charger or even a car’s cigarette lighter socket.

Our only real complaint here is that it’s a US two-pin charger, which is hardly surprising given the fact that the Omnicharge ships from the US, but it would be great to see a UK version available without needing to use an adaptor that makes the power bank less easily portable. A European two-pin plug version is also available. Also see: How to improve smartphone battery life

That’s also the case with the AC/DC output on the device itself. This is the first power bank we’ve tested to include such a feature, but more examples are increasingly coming on to the market. Indeed we’re awaiting delivery on a RavPower power bank of similar capacity with an AC/DC outlet.

It’s a fantastic feature to have, and in essence means you can power practically anything using this power bank – from phones and tablets to laptops and larger electrical equipment.

The need to add on an adaptor really spoils the design, however. It’s otherwise a well built power bank with angular edges and a grippy surface that prevents it slipping from your hands. The Omnicharge is reasonably large for its capacity, but there’s a lot of clever tech inside. And it won’t add too much weight when thrown in a bag.

At the front end sits the aforementioned display, with a power button to one side and buttons for turning on or off the USB and AC/DC outlets on the other. The Omnicharge doesn’t support auto-on, so you’ll need to press the power button to begin charging, and unplug your device once its battery is full.

On the longer edges you’ll find a DC input and AC/DC outlet on one side, and two USB outputs on the other. These are fast-charging USB ports, and on our sample are rated at 2.4A (12W) each with a maximum combined output of 4.2A (21W), which means both cannot offer the full 2.4A at once. However, it appears that this has now been updated so that a single port can offer up to 4.8A, but when using two at once they will not offer more than 4.8A combined. Should you opt for the Pro model you’ll get one Quick Charge 3.0 USB output and another rated at 3A (15W).