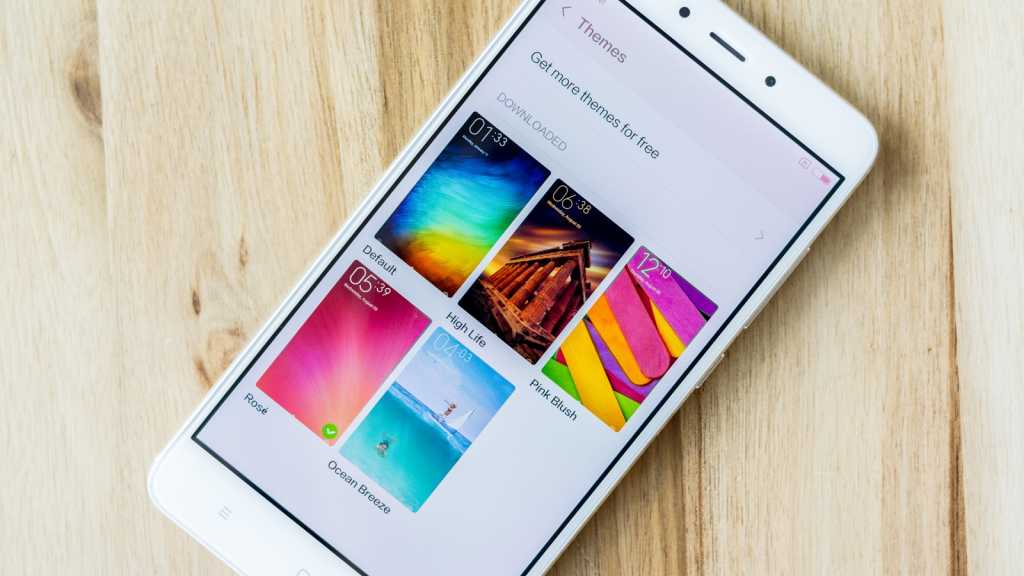 The Redmi Note 4 isn’t a huge upgrade over the Redmi Note 3 in terms of core hardware, with simply a greater amount of storage and a faster processor, but the design changes are a huge improvement over its predecessor. If you don’t care about looks and can make do with less storage then the cheaper Redmi Note 3 may well meet your needs. The Redmi Note 4 remains a great buy, but the omission of Google Play support may put off some users. O2 and Giffgaff customers should also note the lack of support for 800MHz 4G.

The Redmi Note 4 is the latest mid-range phablet from Xiaomi, and it certainly looks like a fantastic upgrade over the Note 3. Of course, looks can sometimes be deceiving. Find out whether it’s worth your money in our Xiaomi Redmi Note 4 review. Also see: Best phones.

Buying from China is not quite the same as buying from the UK, and apart from anything else you may be liable for import duty. Read our advice on buying grey market tech for more details.

Something UK users should watch out for is that Xiaomi phones do not support 800MHz 4G, which is the only 4G band supported by O2 and piggybacking networks such as Giffgaff. Also see: Best cheap phones 2016.

At 151x76x8.4mm the new Note 4 is roughly the same size as the Redmi Note 3 and a little tubbier at 175g (vs 164g), but much has changed. The design is significantly more attractive, now with a full metal build that feels much less cheap. Whereas the Note 3 features plastic parts at the top and bottom to improve signal, the Redmi Note 4 is all metal with those increasingly familiar white stripes top and bottom to ensure you can still get reception. It’s also flatter at the back, with chamfered edges and less rounded corners, yet feels every bit as good in the hand.

Something else gone from the rear is the speaker grille, and you’ll now find two rows of six drilled holes on the phone’s bottom edge, one either side of the now centrally mounted Micro-USB port. This is the same design as is used by the Redmi Pro (albeit with USB-C rather than Micro-USB), but don’t be fooled: it looks nicer, and sound is less likely to be muffled, but there’s still just a mono speaker lying below.

Things look different at the front too, and while you still get the three standard-Android touch buttons below the screen (as before the fingerprint scanner is rear-mounted below the camera) and the bezels are the same size, the new layout above the screen and 2.5D curved glass make it so much easier on the eye. The earpiece, front camera and proximity sensor are now symmetrical: dot, dash, dot rather than long dash, short dash, dot as seen on the Redmi Note 3. It’s a little thing, but it makes more difference than you might expect to the phone’s overall aesthetic appeal. Also see: Best Android phones 2016.

On the top edge the headphone jack, IR blaster and mic have also switched places, but you’ll pleased to learn the volume rocker, power switch and SIM tray remain exactly where you would expect to find them.

Overall these changes make a massive improvement to the look and feel of the Redmi Note 4, resulting in a phone that would look more at home in the flagship Mi family. This is something we also saw in the excellent Redmi Pro, which many people have been comparing to this Note 4. We can certainly see the similarities, especially given the very good 5.5in full-HD IPS panel that adorns the front of each device, offering strong clarity and colour reproduction. The 2.5D glass laid on top makes a huge subconscious difference to your perception of the phone, too: running your finger over a smooth surface rather than a raised lip just feels so much more natural. Also see: Best phablets 2016

There are some significant differences between the two, though – and not least the £65 price hike. The Redmi Pro features a dual-lens camera, and moves the fingerprint scanner to a physical home button at the front. It is also fitted with USB-C and the deca-core Helio X25 in place of the Note 4’s Micro-USB and Helio X20.

The core specifications of the Xiaomi Redmi Note 4 are excellent for a sub-£200 phone. Moving on from the octa-core Helio X10 chip found in the Redmi Note 3 here there’s a deca-core 2.1GHz Helio X20. (The Redmi Pro is also a deca-core phone, but fitted with the Helio X25.) This is paired with Mali T880 graphics, 3GB of RAM and – just as 32GB is beginning to become the norm – a colossal 64GB of storage, which is double the Note 3’s maximum of 32GB. You can add to this too, with support for microSD up to 128GB (though you do so at the expense of dual-SIM functionality – more on this later). To be fair, there is also a version of the Redmi Note 4 that comes with 16GB of storage and 2GB of RAM, but at this price we’d recommend the 64GB model. Also see: What’s the fastest phone 2016?

It’s impossible for us to accurately compare performance with the Redmi Note 3, because when we reviewed the earlier Xiaomi we were testing the 2GB RAM, 16GB model rather than the 3GB RAM, 32GB storage option. The amount of storage shouldn’t affect our benchmarks, but it’s impossible for us to say how much the extra gig of RAM would.

Why did the Note 4 score so much lower in Geekbench 3? Who knows – and to some extent it goes to show just how reliable are processing performance benchmarks. Real-world performance is therefore more important that that of synthetic benchmarks, and here we should say that in our ue of the Note 4 at no point did we find it slow. It may not be as fast as phones higher up Xiaomi’s range but it will do everything most users will require of it and more.

Getting back to the benchmarks, and we also ran the GFXBench graphics test. As we would expect the Redmi Note 4 outperformed the Redmi Note 3, with 31fps in T-Rex against the Note 3’s 22fps. This is also higher than the 25fps of the Redmi Pro, though it matches that phone on the more intensive Manhattan test with both recording 15fps. The Redmi Note 3 trails behind here with 8fps.

Our final benchmark is JetStream, which looks at JavaScript performance when browsing the web. The Note 4 is on par with the Redmi Pro, scoring a slightly lower 23.265 points against its 24.719 points. Unfortunately we do not have test results for the Xiaomi Redmi Note 3.

The battery capacity has been upgraded to 4100mAh in comparison to the Note 3’s 4000mAh. We found we could get two days of use from the Redmi Note 4, but as always the runtime will depend on exactly what you do with the phone.

The Redmi Note 4 doesn’t support NFC, but all other connectivity bases are covered with dual-band 802.11ac Wi-Fi, Bluetooth 4.2, GPS and GLONASS, USB OTG and a fingerprint scanner at the rear. We also like the fact this is a 4G dual-SIM dual-standby phone, but you must choose between microSD support and a second SIM since they share the same slot. And as we noted earlier, the Redmi Note 4 does not supprt the 800MHz 4G band used by O2 in the UK, so O2 (and Giffgaff) customers will need to make do with 3G or look elsewhere. For more advice read our separate article on how to tell whether a phone is supported by your network.

In common with its predecessor the Redmi Note 4 has a 13Mp, f/2.0 camera with dual-tone flash at the rear and a 5Mp selfie camera at the front. (A Snapdragon version of the Redmi Note 3 has a 16Mp camera, but we tested the MediaTek version.)

When viewed at full-size our test images were soft on detail and show a fair amount of blurring, but the colours are realistic and HDR mode improves things no end. You can see a couple of our test shots in Auto and HDR mode below.

We like the camera app in MIUI 8.0, which is very simple and easy to use. It’s easy to apply real-time filters and select modes including HDR, Panorama, Manual and Beautify. Also see: Best camera phone 2016.

Our Xiaomi Redmi Note 4 ran MIUI 7.0 out of the box but with an upgrade to MIUI 8.0.9 available (based on Android 6.0 Marshmallow –  you can read our full Android Marshmallow review here). We recommend you install this, since it adds the ability to password- or fingerprint-protect notes, a new energy saving mode, enhanced video-editing tools plus some photo features that allow you to add doodles and stickers and quickly share your snaps, the new and supposedly easier-on-the-eyes Mi Lanting font, updated QR scanner and calculator apps, an enhanced multi-tasking menu, brighter colours and new lock screen wallpapers.

MIUI 8.0 is a great take on the standard Android operating system, but it won’t be familiar to those who haven’t used a Xiaomi phone before. Settings are found under different sections to standard Android, there’s no app tray which results in an iOS-esque experience, the drop-down notification bar has also been tweaked and, more importantly, there are no Google apps. Also see: Best Chinese phones 2016

Xiaomi has its own app alternatives for many of the standard Google apps you’d expect to find on an Android phone, but some of these are Chinese (they can be uninstalled or tucked away in a folder), and if you’ve ever used an Android phone before you’ll probably prefer to use Google apps to seamlessly sync your data.

It’s easy enough to install the Play Store, and you simply create a Mi account and search for Google Play in the Mi App Store. Everything here is Chinese, but if you tap on the first option with the Google Play icon it will download the Play Store and any associated services that are required to run it.

Having done so you may find it takes half an hour or so for the Google account to register on the phone, so you may not be able to immediately download apps from Google Play.  In our impatience we found it easier to sideload the apps we use for benchmarking, but to do so you’ll first need to enable the installation of apps from unknown sources in the privacy settings.

One thing we highly recommend for UK users is to download the Google Keyboard, since the Chinese characters on the standard keyboard can be confusing and much of the time you’ll be relying on guess work to find they button you want.

A software feature that’s particularly useful given the size of the screen is One-handed mode. This lets you perform a simple gesture to shrink down the display to 4.5-, 4.0- or 3.5in. A Quick Ball can also be put anywhere you like onscreen that when tapped gives options to return to the home screen, open the recent apps menu, lock the screen, take a screenshot or go back.