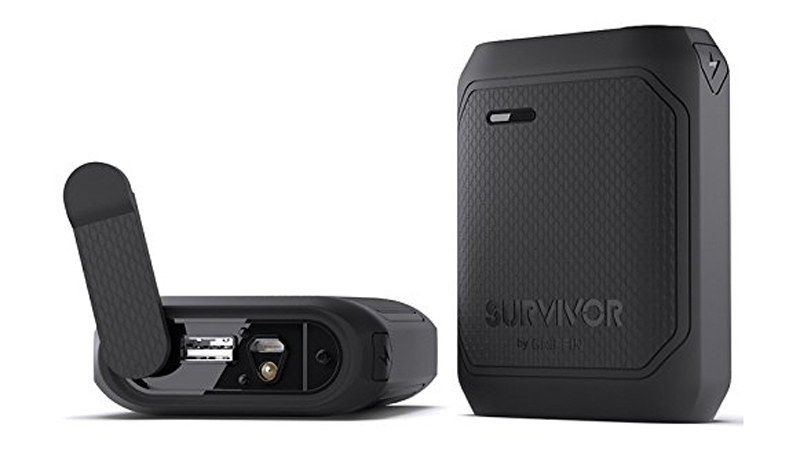 It might be on the expensive side for a power bank of this capacity, but the tough little Griffin Survivor has a rugged charm. It’s reasonably fast and it’s rainproof, and there are some nice extras such as passthrough charging, auto-on/-off and a lifetime guarantee. If it’s not all about value for money, this may be the power bank for you.

Griffin’s Survivor portable charger is more expensive than many of its similarly specified competitors, but it’s a tough little  power bank and we like it. Also see: Best power banks 2018

The Survivor is available direct from Griffin’s website for £49.99. A slightly cheaper version is available on Amazon for £47.52, though we assume this must be an older model given its lower 10,200mAh capacity.

The Survivor power bank we reviewed has a 10,500mAh capacity, and should offer at least 7,000mAh to your connected devices. Griffin says it offers up to five charges for your phone, but doesn’t specify which model. We’d expect the Survivor to offer most iPhones around four full charges, and Android phones between two and three full charges. However, with a 10.5W (2.1A) USB output it’s fast enough and with enough capacity that you could conceivably connect a tablet instead. Also see: How to charge your phone’s battery faster

Charging is automatic, and you simply plug in your device to begin. Once charging is complete it will automatically disconnect from your phone or tablet, which prevents power being wasted. If this doesn’t happen automatically for you then there’s also a power button on the side, a double-press of which lights the built-in LED torch. This can also be used to activate the power guage, which uses four LEDs to show you how much power remains in the bank. It’s all pretty straightforward in any case: you just plug in and charge.

While we’re on the subject, the Survivor also has a fast 10W (2A) Micro-USB input for recharging the power bank, and it will allow you to charge both it and a connected device at once (known as passthrough charging). That’s super-handy when you want to charge both your phone and power bank on a daily basis and have only one USB plug. See all power bank reviews

But none of that is what makes the Griffin Survivor special. After all, we’ve seen power banks that support the fastest Quick Charge 3.0 on both their input and output, power banks with additional USB outputs, USB-C outputs – and inputs – and Lightning outputs. The Survivor is fast, but it’s by no means the fastest available and it’s not going to be a good buy if you have multiple gadgets to charge.

What we like most about the Griffin Survivor is its design. This is a compact power bank, rounded on the edges, which fits snugly in the hand at just 93x75x25mm and 238g. Encased in a black grippy rubber coating it not only feels comfortable to hold, but is rugged and tough and feels as though it’s going to last. And last it will, since Griffin covers it with an extraordinary lifetime warranty. Also see: How to improve smartphone battery life

Tested to Military Standard 810G the Survivor can withstand drops up to 2m and, thanks to a rubber flap that covers its ports when not in use, it is also protected from the elements, such as rain and snow. The Griffin has an IP66 rating, which means you cannot submerge it in water (we’re not sure why you’d want to take a power bank swimming anyway), but it should be just fine in a downpour.