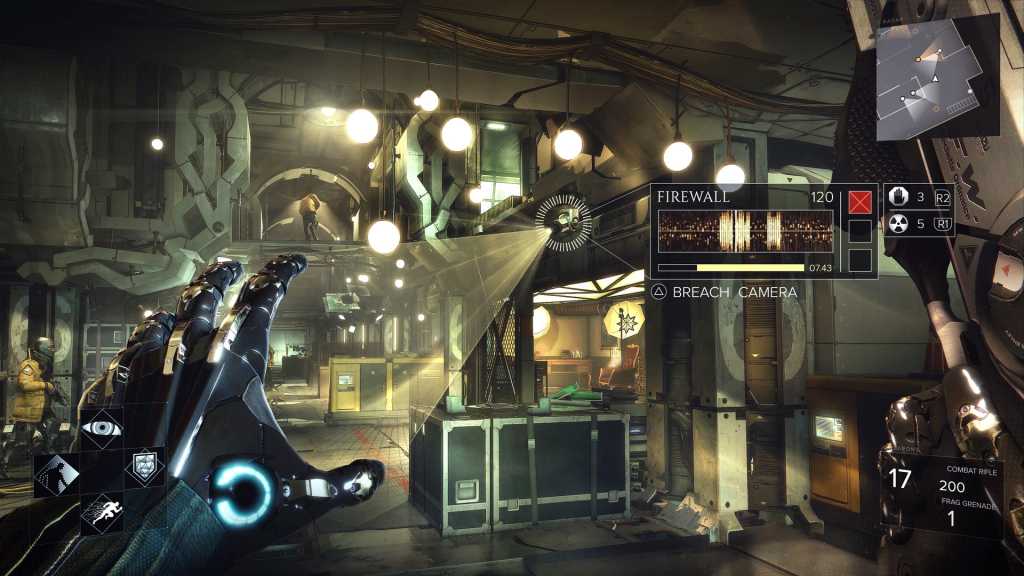 While Deus Ex: Mankind Divided has all the core mechanics to make a great game – upgrades, conspiracy theories, a solid storyline and great voice acting – it just seems to fall flat after the first few missions. The storyline, although interesting doesn’t last for nearly as long as the Human Revolution campaign, even with a sprinkling of fairly interesting and varied side missions and the button layout is just a bit too different to other first person shooters to make it a game you can just pick up and play without a serious learning curve. If you’re a fan of the series we’d still recommend playing it as the story is great, but don’t expect to be sinking hundreds of hours into the game.

The Deus Ex series is a long running one, that’s for sure. Set in the not too distant future, the Deus Ex series offers a kind of satirical (but very serious) look at where society could be headed if our obsession with technology continues. The latest in the series, Mankind Divided, takes place two years after the events of Human Revolution with Adam Jensen doing what he does best – getting to the truth by any means possible. Read next: Best games of 2016

So, which platforms are Deus Ex: Mankind Divided available on? The game is now readily available across the PlayStation 4, Xbox One and PC via Steam after being released in August 2016. PlayStation 4 users can download the digital edition via the PlayStation Store for £49.99, or you can head to Amazon and grab a physical copy for £37.70. It’s a similar story for Xbox One users too – £42.99 on the Microsoft Store, while it’s £41.99 on Amazon.

With regards to PC users, there’s only one place to get hold of Deus Ex: Mankind Divided in software form, and that’s via Steam. Users looking to buy the game on Steam can do so for £39.99, while those looking for a hard copy can grab one from Amazon for a whopping £57.99.

Deus Ex: Mankind is set in the not-so-distant future city of Prague, although it’s not the Prague we know and love today. The city is plagued with violence, and is on the brink of a civil war – but not between people and the government, oh no. Think of it as more of a medical apartheid where humans with augments, or ‘augs’ as they’re known in game, are considered a sub-class of human following “The Incident” which took place two years prior. The Incident was triggered by The Illuminati, an extremely powerful anti-aug group that conceals its actions behind rumours, disinformation and of course widespread panic, and caused all augmented humans to fly into an uncontrollable, murderous rampage.

The Incident was the climax of the previous game, Deus Ex: Human Revolution, and for those of you that don’t remember the entire story/didn’t play it, don’t fret – Square Enix offers gamers the option to watch a 12-minute video recapping events of the last game, although the game works just as well as a standalone offering you pieces of background information when needed.

As with other games in the series, you experience the world through the eyes of Adam Jensen, a one-man army in the war against The Illuminati – although Adam Jensen has the benefit of being an augmented ex security officer that works for Interpol, while at the same time secretly working for the Juggernaut Collective, a hacking group helping him to confront and thwart The Illuminati.

The story sees Jensen travel from place to place, chasing up leads from both Interpol and the Juggernaut Collective. While this may not seem exciting to some, it’s worth noting that the player must make crucial choices at certain points in the game which can change everything from Jensen’s relationship with other characters to what will happen later on in the game. You find a piece of valuable information – do you give it to Interpol, or the Juggernaut Collective? It’s a choice that only you can make, and is one that shouldn’t be taken lightly as the consequences can, and often are, grave.

While we won’t spoil the story for you, we have to admit – it was a lot shorter than we’d first expected. While we have memories of playing Deus Ex: Human Revolution for hours on end, it felt like Mankind Divided was over all but too quickly, and that’s with taking on as many side missions as I could find. While the storyline is full of juicy conspiracy theories, shady characters and a lot of drama, Square Enix wraps it up rather quickly in an admittedly slightly disappointing way, leaving us with a feeling of “oh?” as the end credits rolled.

So now you know what it’s about, the next question is “What is Deus Ex: Mankind Divided like to play?” and if we’re being honest, it’s a bit complicated – on the surface, anyway. First up, the control scheme is unlike any other first-person shooter we’ve played, and takes a serious learning curve to get used to, although the developers recommend learning their way of playing to get the most out of the game. This is true – once we got used to it, it did enable us to perform a number of actions without entering the game menu, but we died a lot in the meantime, usually by standing up from a crouch instead of entering cover.

If you get over the slightly awkward control scheme, you’ll find an abundance of side missions to take on in and around Prague, although these aren’t easy to spot. Unlike in other games where NPCs with missions are easily identified (usually via some kind of marker), a side mission can come from almost any NPC in Mankind Divided. The only tell-tale sign that a passer-by might have some valuable information is the fact that they have a name above their head, opposed to being marked as something generic like “Citizen”.

Side missions are just as detailed and riveting as main missions, and we were surprised at just how small, seemingly insignificant details in these side missions helped us make crucial decisions during the main missions.

The game provides users with a number of ways to complete each and every level, allowing users to take different approaches – stealth, all-guns blazing or a combination of both. In fact, the way you decide to tackle certain levels will influence how others look at you – using lethal rounds will cause you to look reckless, while using less effective stun tactics leaves you with a better reputation. However, the most impressive factor is that you can apparently go through the entire game without killing a single person, although that’d be a fairly tough achievement.

Deus Ex: Mankind Divided offers a rather unique way to play, as it’s generally speaking a first-person shooter, although it changes to a third-person view when in cover and interacting with the environment, allowing for a rather fun and satisfying stealth element. The animations are seamless, and adds a bit of drama to any situation – especially when using the more advanced augments in Adam Jensen’s arsenal.

Speaking of augments, Adam Jensen has had a serious upgrade when compared to the augs available in Human Revolution. While the old augments do make another appearance, Jensen has access to a number of experimental augs that he doesn’t remember getting, although activating one forces him to deactivate another permanently, making you choose which style of gameplay you want to use fairly quickly in the game. Augments and their subsequent upgrades offer a range of abilities, from being able to withstand more damage to going invisible for a short time or upgrading the hacking skills to make hacking terminals a quick and painless job – it’s your choice.

It also means that if you specialise in stealth, for example, you can’t go up against heavily armoured bosses – which the game does feature. This unbalanced nature can help or hinder a player depending on their upgrade choices. This applied to us during our time with Deus Ex, as we were stuck at a boss fight for so long that we seriously considered just giving up – and that’s not fun for anybody. Do games need overpowered bosses in this day and age where games are far more complex and entertaining than those available back in the 90s?