Overall the MiVue 618 is well designed, easy to use and has some useful features, especially the speed camera warnings. Image quality isn’t the best, but unless you plan to use the footage for home movies, it doesn’t really matter: you can see the detail that’s important if you’re involved in a collision.

Mio is perhaps best known for its satnavs, but has now released a new range of dash cams. The MiVue 618 sits in the middle of the range and has a few interesting features which make it stand out from the crowd, such as speed camera warnings. See also: Best dash cams

Note: The quality of the video above has been reduced by our video player. The actual quality is better and you can see a grab from the original video later in this review.

You can buy the MiVue 618 for £89.99 from Amazon. This is good value for a dash cam which includes GPS and also free speed camera alerts (with no subscription). It also makes it a tenner cheaper than the Nextbase 312GW and the Asus Reco Classic.

Mio has clearly thought long and hard about how its dash cam and has come up with a near-perfect design. We like the fact that the front is all-black, which makes it more inconspicuous to anyone outside the car.

The windscreen mount has a ball-joint for adjustment, and the cup is actually part of the dashcam itself, which makes it more compact and it therefore sits higher on the windscreen and out of the way.

However, the mini USB port is badly located on the top edge right under the lever for the suction mount, and this makes it awkward to plug in the power cable.

Buttons are on the right-hand edge and on-screen labels tell you their functions, which makes menus much easier to navigate. The menus are clear and nicely arranged, with plenty of options. It’s fairly easy to enable a parking mode, although for anything more than a few hours we recommend getting the camera hard-wired with an external battery to avoid draining your car’s battery. 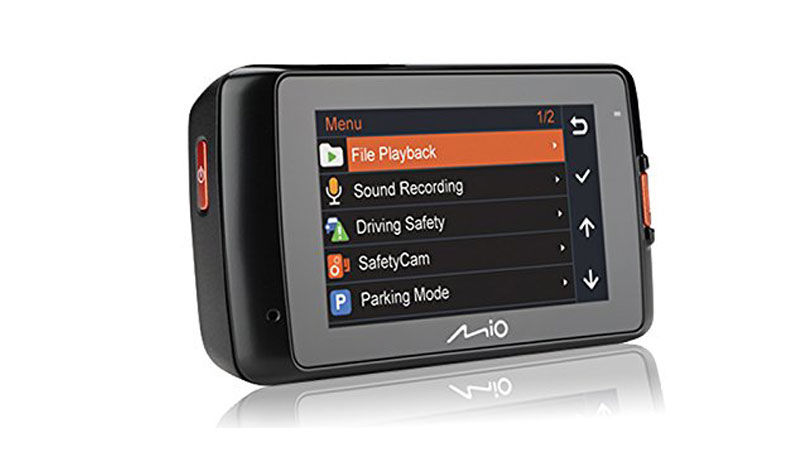 There’s an orange button on the rear next to the screen which allows you to easily lock a recording if something happens, and this prevents that clip being overwritten when the card becomes full. Similarly, there’s a G-sensor which will detect an impact and again lock the video file. You can adjust the sensitivity, but don’t put it on ‘high’ as every little bump in the road will set it off.

There’s lane-departure and speed warning options, although the former (as we’ve seen on other dash cams) is too temperamental and is likely to be disabled soon after you first try it. The speed warnings can be useful, but we really like the safety camera alerts which show a distance meter on screen as you approach a camera location so you can adjust your speed accordingly.

The audio alerts are useful, although it’s a shame Mio hasn’t gone to the trouble of offering different voices: the Asian English speaker quickly got on our nerves. 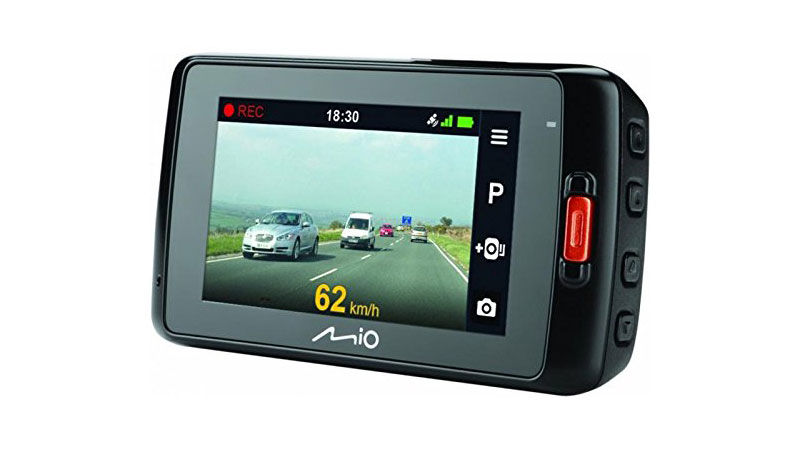 You can choose the resolution, the clip duration and all the other options you’d expect to find, including the ability to choose which data is stamped onto the video such as your speed and location. There’s also the choice of speed in mph or kmh.

If you are involved in a collision, you can remove the camera from the car and use it to snap photos as evidence – these also have GPS location on them to prove where you when it happened. There’s a small battery in the 618 for this, and also to ensure the video is recorded to the microSD card (none is supplied) when you unplug it or switch off your ignition.

If your car cuts power to its accessory socket when you turn off the ignition you can leave the power cable plugged in and the 618 will automatically start and stop recording.

What the MiVue 618 doesn’t have is Wi-Fi, although we’ve yet to find this a useful addition in any dash cam. The £140 MiVue 658 has this, plus a touchscreen.

The MiVue 618 defaults to its highest resolution of 2304×1296 at 30fps, but you can select 1920×1080 (or lower) if you prefer. There’s no 60fps option at these resolutions. The 140-degree lens means plenty of the scene in front of your car is captured, but also means registration plates are quite small unless you’re very close to another car.

We didn’t find that the ‘extreme’ resolution offered much more detail than 1080p, but a bigger annoyance was the inaccurate colours. Roof tiles appeared bright orange and grass a lurid, unnatural shade of green. Other dash cams have better colours, if not noticeably better details. Here’s still from the video at the full 2304×1296 pixels (click to enlarge). 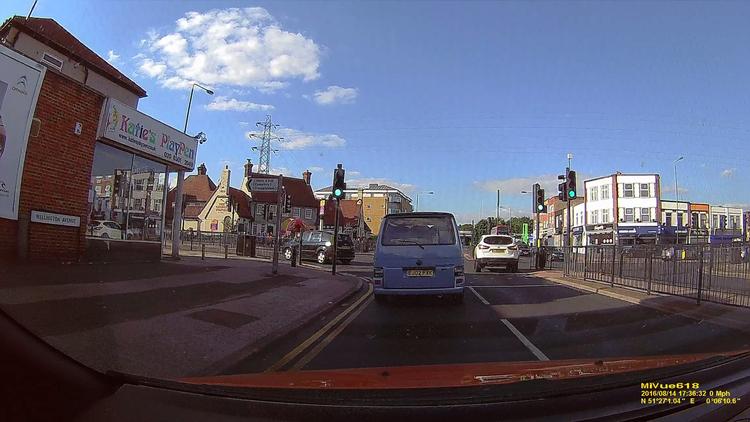 The 618’s image was also quite grainy and oversharpened, but it doesn’t really matter as it was still perfectly possible to read registration plates of cars driving in the opposite direction on a single-carriageway road when you pause the video.

Here’s a 100 percent crop of the image above so you can easily see the level of detail available in video: 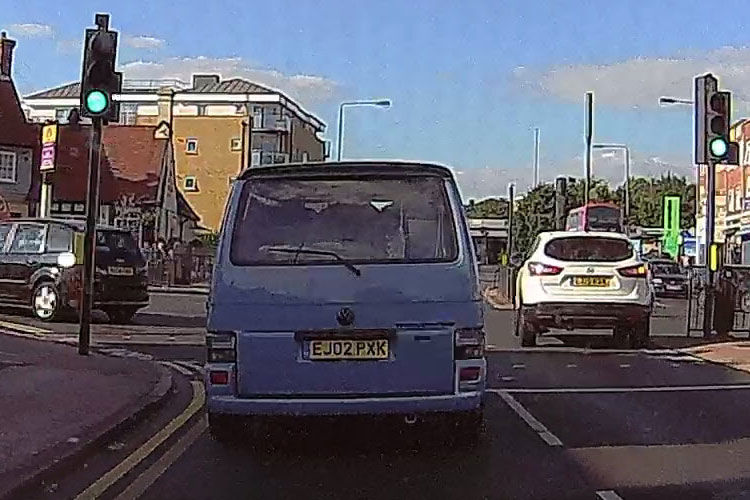 At night, quality drops off markedly. This is true of all dash cams, and like most of its rivals, it’s not really possible to read registration plates from the 618’s night footage.

Files are recorded in MOV format using H.264. For some reason, the default video player in Windows 10 refused to play audio from these files, but VLC was able to play them with sound. Also, you can download MiVue Manager from Mio’s website to review footage along with your speed, the G-sensor data and links to share on YouTube and Facebook. It’s one of the better utilities we’ve seen from a dash cam maker, but it doesn’t show a map of your location. All you can do is click the KML button to export a route that you can see in applications such as Google Earth. 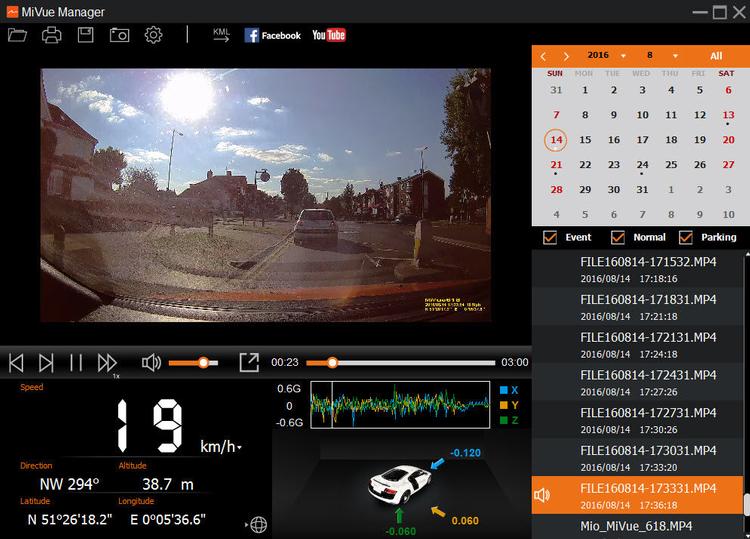