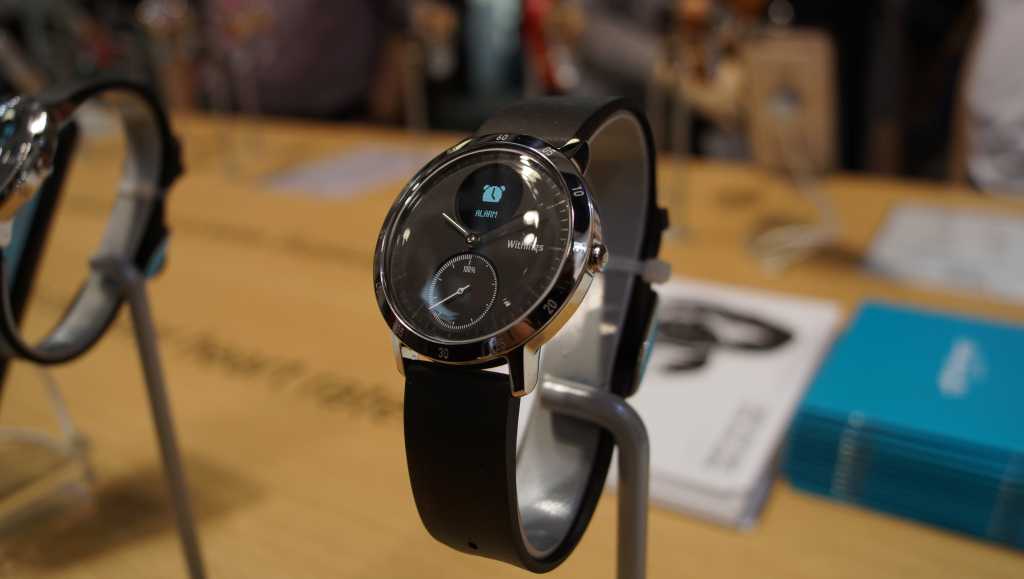 Our overall impressions after going hands-on with the Withings Steel HR is that the company has found its sweet spot. Of all four of its current wearables, it best combines function, form and user experience at a reasonable price; other Withings, such as the overpriced Activite Sapphire, do not achieve this. If you want a smartwatch that nails the basics while adds heart rate monitoring in an understated design, this is definitely the watch to consider.

We are firmly in the second wave of smartwatches. A relatively new product, the hype surrounding wearable tech has calmed since it peaked with the release of the Apple Watch in early 2015. Withings, the French Nokia-owned company, has been around since 2008, quietly producing smartwatches of subtle style. Not everyone wants an all-singing all dancing smartwatch with one-day battery life, and Withings has continued to break the mould with the Steel HR, its latest product announced at IFA 2016. We went hands-on to see what it was like.

The Withings Steel HR will arrive on 1 October in Europe, with a specific release date and UK price to be confirmed. The European pricing is set at €189.99 for the 36mm Steel HR, with a slightly larger 40mm model costing only €10 more at €199.99. We’ll update this article as soon as UK price and release dates are announced.

The Steel HR continues Withings good track record with design. Its two models are fairly similar, but have some subtle differences. The designs are not necessarily male and female orientated, with the 36mm model coming in the option of a white or black face and black strap while the 40mm model has only black face and strap with the addition of a wider bezel that has 5-minute interval points etched around it. We did however see one on display with a pinkish red strap, so Withings may be preparing its own strap range for launch.

Both are, importantly, watches first and foremost. On the wrist, even with the addition of a heart rate monitor, they look and feel like classic timepieces as opposed to higher-end wearables that can sometimes feel clunky and space-age. The watch itself is a metallic reflective silver, with the heart rate monitor sitting flush on the rear where it touches the wrist. It looks very similar indeed to the Withings Activite Steel and the high-end Activite Sapphire, older models that lacks a heart rate monitor.

The watch face is the same on both models save for the inversion of colours, with a smaller circular read-out display in the top half and a chronograph dial underneath in the bottom half. The analogue hands are silver and the Withings logo, next to three o’clock is the only other addition. A button also at three o’clock mimics a traditional watch bezel, but is pushed, not turned, to cycle through the functions and notifications of the small display.

The straps are black and are the only options, though given they are regular watch straps you have the option to purchase any strap of the right size.

Withings has four smartwatches currently on the market, and the Steel HR is very similar to the other three in design. This is no bad thing as long as you’re not looking to stand out from the crowd; the classic looks are quite understated but we reckon it is the best looking watch of the bunch.

Most obviously, the Steel HR adds heart rate tracking to the Withings line up. As on many other wearables before it, this can be set to regularly monitor your resting rate as well as levels during exercise to build a picture of your heat’s health and habits. Withings make no claims of superior accuracy to competitors, and while the feature is seen more and more on smartwatches, the accuracy of them in comparison to professional medical equipment is uo for debate.

Despite its subtleties in design, the Steel HR is packed with tracking features. In tandem with the official app, it tracks your steps, runs, swims, distance travelled and calories burned. We saw it also working on someone who’d been wearing it all week, and the Steel HR can analyse your sleep cycle. It shows your sleep patterns on a wave graph that takes into account your heart rate, which is a great feature and one missing from several more technically advanced wearables.

Given the simplicity of design, most of the visual analysis happens in app, but that small circular display can still pull in notifications from your phone. The display itself is a simple LED read-out with figures and icons white with a hint of blue glow. You can cycle through steps, calories burned and other stats using the one button on the watch, while it also pings up with text message and incoming call alerts. It’s all quite intuitive and pleasingly unobtrusive, particularly on the models with black faces as it blends in nicely.

The software you’ll need along with the Withings Steel HR is the accompanying app, available on iOS and Android. It’s clear and easy to use, much like its rival Samsung S Health and Fitbit equivalents, and makes it easy to track all manner of day-to-day activity.