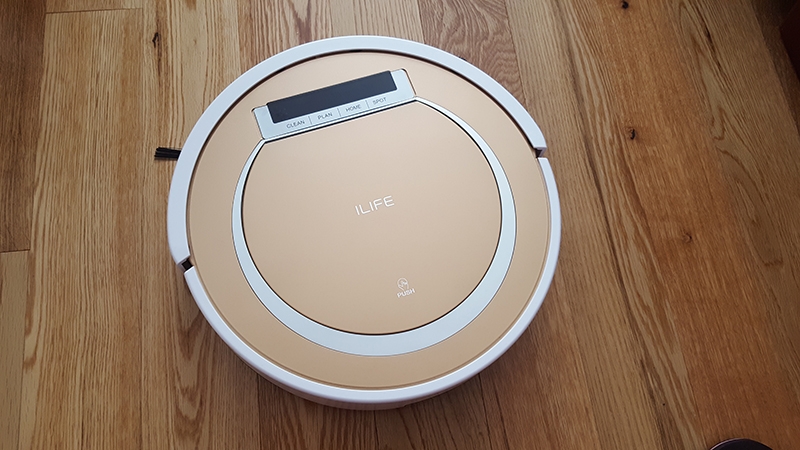 A robot cleaner will not completely replace your vacuum cleaner or your mop, but it takes a great deal of pain out of daily flick overs. The iLife X5 does a good job of vacuuming and mopping flat surfaces, but performs less well on carpeted or uneven floors. It’s incredibly easy to set up and great value.

The iLife X5 is one of the best smart gadgets you can add to your home, taking the hard work out of mopping and hoovering the floors. We review the iLife X5 Robotic Vacuum Cleaner.

The iLife X5 is the second robot cleaner we’ve reviewed, and is significantly cheaper than the Jisiwei S+. Right now you can buy it from GearBest with 51 percent off at £102.59 ($128.99) with free delivery to the UK. Note that you may be required to pay import duty when it arrives in the UK, and in our case this added £21 to the overall cost.

The iLife X5 is a circular device 300x300mm and 70mm thick, with two spinning brushes used for sweeping are visible from the front of the vacuum cleaner. There’s an arguably under-used  LCD screen on top, which shows which mode the robot is in, with four buttons below. It has a stylish design with a gold plastic top and white outer ring that won’t look out of place in any room of the house. Also see: Best robot vacuum cleaners

Key differences between the Jisiwei and this iLife are the fact this vacuum cleaner has an interchangeable 300ml dust- and water container, with an attachable mop that lets you seamlessly switch between mopping- and hoovering modes simply by changing which container is installed inside the robot. Also see: Best smart lightbulbs 2016.

In vacuuming the iLife isn’t as strong as the Jisiwei, since it relies on two front spinning brushes and 550Pa/850Pa suction, whereas the Jisiwei also has a proper roller. While this means the iLife won’t do as thorough a job on carpets, it is able to glide over even long-pile rugs where the Jisiwei would get stuck.

This makes the iLife more suited to being left unattended to get on with its work, and only a couple of times did we have to give it a nudge when it got itself stuck on a raised door threshold. It can climb up to 15 degrees, and in our opinion does a better job at getting round obstacles than does the Jisiwei.

Of course, it’s not about to climb any stairs, so the X5 will need some guidance to clean both upstairs and downstairs in your home. And for that reason it probably isn’t about to entirely replace your vacuum cleaner or your mop, though it can take much of the hard work out of a quick flick over.

The iLife does a great job of cleaning right to the edges of the room, even when it isn’t in border cleaning mode. There’s also a spot cleaning mode for dirtier areas. It uses an anti-collision IR sensor to avoid obstacles, though we found it was still prone to sucking up the odd shoelace or phone charger, so you’ll need to remove these before you begin cleaning with the X5. If you are going to schedule cleaning for when you’re out at work, remember to tidy up before you leave the house.

Something we love about the iLife X5 is the fact it comes bundled with a virtual wall gadget. This is a small battery-powered box that emits a beam beyond which the X5 is not allowed to clean. This works brilliantly for preventing it getting into certain rooms – perhaps where you have carpeted floors and the X5 is in mop mode – although we found you need to place this inside the off-limits room as the beam seems to widen the further it goes.

In mop mode you simply fill and insert the water container and attach the mop plate to the bottom of the device. A cloth attaches using Velcro, which means you can take it off and clean it when required. (A spare cloth is included in the box, along with two spare spinning brushes and another dust filter.)

We were initially concerned by how good a job the cloth could potentially make of mopping the floor without being rinsed out every so often, but the iLife X5 impressed us. Fixed plastic prongs attach the mop plate to the X5, so it struggled with uneven floors such as slate, but on flat surfaces it did a great job without leaving behind puddles that could cause someone to slip and fall.

The iLife X5 moves faster than does the Jisiwei, and yet it is surprisingly quiet in operation. The company claims it is under 40dB.

One of the reasons the Jisiwei is so much more expensive than this iLife is that it comes with lots of extra bells and whistles, including a camera that allows it to also function as a security device. Whether or not this feature is a gimmick is debatable, but more useful is the Wi-Fi functionality that allows it to connect to a mobile app and for you to operate it remotely.

The X5 does not have a mobile app, and is operated purely by the bundled remote control and four buttons on top of the device itself. You could argue this is both a drawback and a blessing, but I’m inclined to agree with the latter: the iLife is significantly easier to set up and use out of the box, and far more user-friendly. Even the biggest technophobes will be able to get the X5 up and running.

The 2600mAh battery inside this X5 will last around 90 minutes and charges in under 5 hours. When the battery is running low it will automatically return itself to its charging base, or you can send it home using the remote control.

An iLife V7S is also available that has a higher-capacity tank and longer working time.