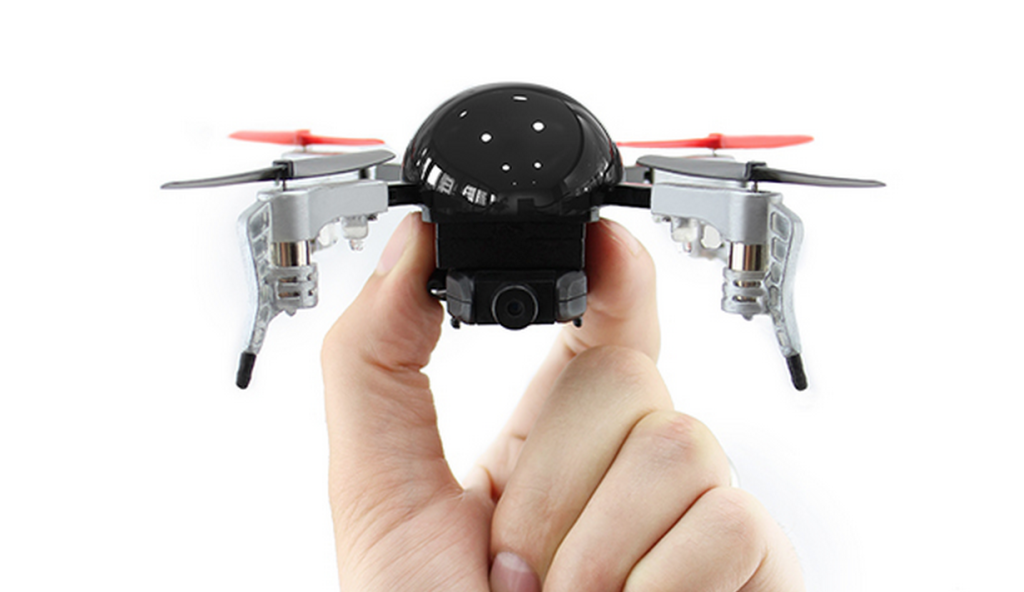 Overall, the Micro Drone 3.0 is fun drone. It’s just a little rough round the edges. The learning curve – as with any manual drone – is steep and you will crash it, but all spare parts are available. If you’re serious about FPV, you’re better off spending more and building your own drone.

The Micro Drone 3.0 was a successfully funded Indiegogo campaign, and is intended to be a low-cost entry to FPV racing as well as being a fun toy for beginners and expert quadcopter fliers alike. See also: Best drones with cameras

You can buy the Micro Drone 3.0 from Currys for £149. That puts it in the middle ground between cheap drones and enthusiast models costing £200-400 from the likes of Parrot and DJI.

For roughly £30 more you can buy the GPS-equipped Flying 3D X8, which is a lot larger and – thanks to GPS – easier to control.

In the Currys bundle you get the drone, a controller, a 720p Wi-Fi camera, a phone holder for the controller and a Google Cardboard-like headset for FPV (first-person view). Prop guards are also included in the box which snap on and off.

Spares are mostly cheap, but aren’t available from Currys. For propellers, batteries and other parts, you’ll have to go to the microdrone.co.uk website.

Oddly, parts are priced in dollars but shipping is free to the UK. You can buy every spare including a complete Micro Drone for $55 (approx. £41 plus VAT). A set of propellers costs £7.25 including VAT.

An optional extra is a two-axis Micro Gimbal, but this isn’t launched yet. It has tiny servo motors just like a proper gimbal and should give much more stable footage. Whether it’s worth it is down to price.

Compared to some drones, the Micro Drone isn’t very small at all. In fact, it’s a double-palm-size drone – considerably larger than the truly tiny ‘nano’ drones you’ll find in our cheap drone roundup. 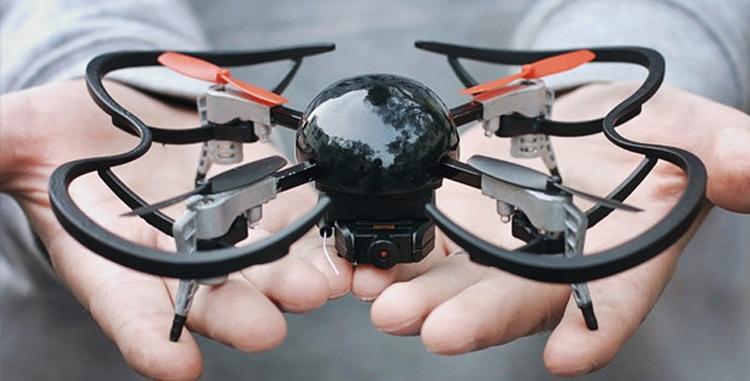 That doesn’t matter too much unless you were planning to fly it indoors. You’d need at least a village hall to have any fun: most normal houses are too cramped and crowded.

Outdoors the extra size helps to stabilise the Micro Drone in a breeze, but anything more than a light wind will blow it off course. There’s no GPS to maintain position or a barometer to hover: this is a fully manual affair.

Well, not completely manual: there’s a return-to-home option which requires that you pair the drone with the controller when it is facing away from you on the line you want it to return. A dedicated button on the controller has to be held down to start the return.

There’s also a smart orientation mode (the equivalent of ‘headless’ found on other drones) which means the Micro Drone will move in the direction you push on the right-hand stick no matter which way it’s pointing.

A shoulder switch lets you choose Slow, Fast or Insane speed, and Extreme Fliers claims the Micro Drone will reach up to 45mph. There’s another switch on the front for enabling inverted mode. In the box is a set of grey propellers which must be used for this, and when you flip the switch the drone flips over and the motors reverse so it can fly upside down. It’s hard to see the point of this when there’s also a stunt mode that uses the normal props and lets you perform 360-degree flips.

The battery (above, right) is proprietary and much like the sort you’d find in an action cam. With a 550mAh capacity, it’s good for only about five minutes of flight and it takes about 30 minutes to recharge. It can be charged while removed from the drone, but you can’t buy batteries separately – they come with a charger for $16.99.

You attach the camera magnetically to the battery (this also provides power) but you will need to attach the included cable if you install the gimbal. Installing the cable involves popping off the black dome: a thin plastic cover which protects the small circuit board.

Because the battery powers the camera directly, both can be disconnected from the drone and used separately to get a remote video feed. This could be handy if you have other R/C toys and fancy getting some video from an unusual perspective. The camera accepts up to 32GB microSD cards, but you can also record directly to your phone (video goes into the Review section of the app and can be shared from there).

Build quality is mixed. The drone is reasonably sturdy, but several of the supplied propellers were too lose and spun off before the drone left the ground. The transmitter feels cheap and the sticks don’t offer much resistance, which makes precise control harder. Plus, the phone holder is a bit flimsy and isn’t really designed to hold anything much larger than an iPhone 5.

The manual is well written in proper English, and the app includes six useful tutorial videos. 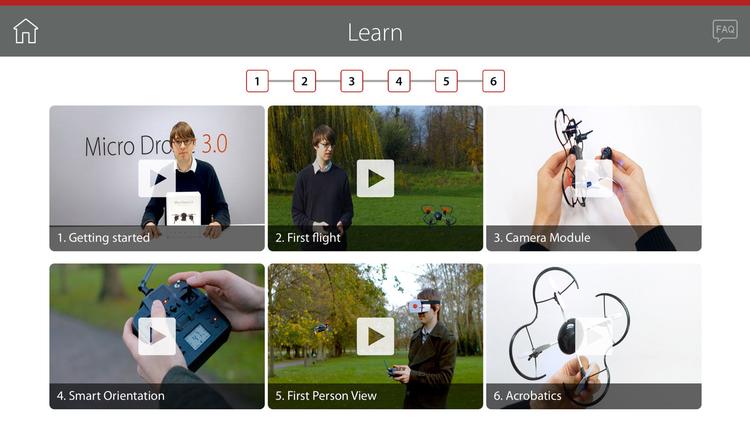 It can take a while to get used to flying a manual drone as it requires tiny inputs on the sticks. Use them roughly and you’ll crash. It’s supremely easy to lose control, and if you do crash it’s possible that the camera will fall off – even the battery too.

Once you’re used to it, the Micro Drone is very controllable but, as mentioned, you’ll have to wait for a very calm day to see it at its best.

With the app, available for iPhone and Android, you can watch the video feed, start and stop video recording, take photos and even control the drone using virtual sticks. 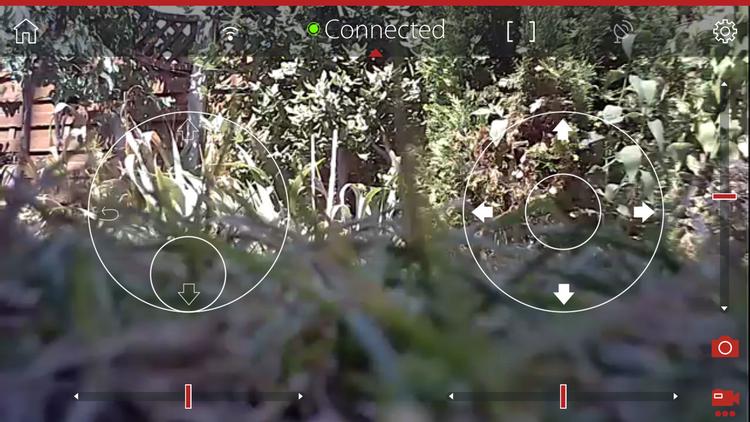 Plus, you can switch the app to FPV mode and get an on-board view. There’s quite a bit of latency, so it’s a nauseating experience, and the supplied cardboard viewer and stick-on elastic strap isn’t really up to the task, but it’s fun until the novelty wears off. 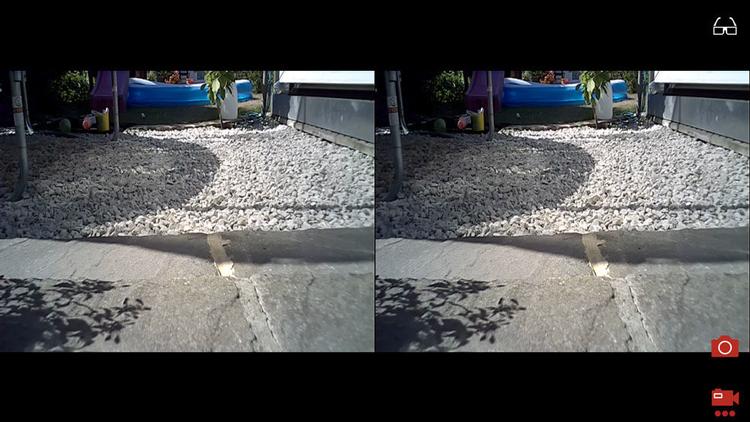 Strangely the app doesn’t have a battery icon, so you can’t easily check how much charge is remaining: the LCD screen on the remote shows only the level of the four AA batteries inside it.

Video quality from the camera is better than we’d expected, and is a good step up from other drones around this price including the Hubsan X4 FPV and (cheaper) Revell X-Spy. It’s fairly sharp, but colours aren’t great. You can fix this with a little video editing, though.

Of course, with no stabilisation, footage isn’t particularly nice to watch and there’s also a bit of video wobble (the jello effect) caused by the vibrations from the propellers. But you wouldn’t expect the kind of quality you can get from a DJI drone on something that costs £149.