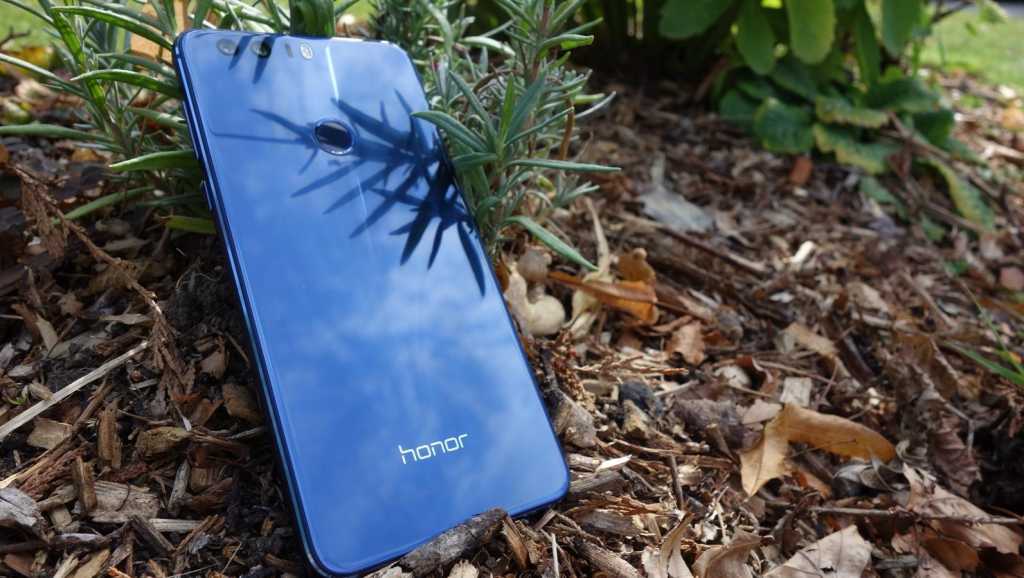 The Honor 8 is a fantastic smartphone, but the price has gone up from the Honor 7. In return for the additional expense you get a fantastic dual-camera, a sleek and stylish design, a faster fingerprint sensor and a beautiful display, which combined make the Honor 8 a worthy competitor to the OnePlus 3.

The Honor 8 has a beautiful design and an impressive build quality. Launched in Paris on 24 August at £369.99, it’s a £40 more expensve than the OnePlus 3, and £120 more than its predecessor, the Honor 7. However, its features justify the extra cost. Read next: Best budget smartphones

In the UK the Honor 8 is available in three colours: Sapphire Blue, Pearl White and Midnight Black. A fourth Sunrise Gold version is available only in the Middle East and Russia for now.

The phone comes in 32GB and 64GB variants with up to 128GB of additional storage possible through micro-SD, though this card occupies the Honor 8’s second SIM slot. Both have 4GB of LPDDR4 RAM. Also see our dual-SIM buying advice.

Select retailers including  Clove, Ebuyer, Expansys and Three will stock the Honor 8 from 9 September, and Three has the UK exclusive at launch.

Trough vMall you’ll also be able to buy accessories including smart covers and soft protective shells, which will vary in price.

The phone comes with a one-year warranty. Read next: Best SIM-only deals 2016.

At this price the Honor 8 faces competition from the OnePlus 3, the Honor 7 and the BQ Aquarius M5. Read next: Cheapest 4G smartphones of 2016.

The display is sharp, with clear text, and bright enough to be visible in sunny conditions. It can be calibrated in the phone’s settings too.

We like the ‘Eye comfort’ mode, which reduces the amount of blue light emitted from the screen. This works like Apple’s Night Shift and the Night Mode feature that was tested during the Android Nougat beta.

The display has a 96% NTSC colour coverage, resulting in accurate colours with good contrast. This is IPS tech, so you don’t get the same oversaturated colours you get with AMOLED.

The phone is just 7.45mm thick, but it’s the Honor 8’s all-glass design that makes it stand out from the crowd. Fifteen layers of glass are used to refract glass in different directions from the back.

The Honor 8 has one of the most unique and elegant designs we’ve seen in a phone, making it attractive for the young Millennials Honor is pitching it at. But we think it’s a good-looking phone for users of all ages.

The impressive craftsmanship is seen throughout the design, and without a protruding camera the phone sitting will sit flat on a table. Thin bezels and rounded edges make the Honor 8 feel nice in the hand.

On the right side is a power button and a volume rocker, while at the top there is a microphone and an IR blaster. The latter can be used to control home appliances using Honor’s Smart Controller app.

Interestingly, Honor has placed the 3.5mm headphone jack down at the bottom of the phone, where you’ll also find a USB-C connector and a downward-firing speaker.

On the left side is a SIM card tray, which doubles up as a micro-SD card slot. The Smart Key has been moved to the fingerprint sensor, which allows you to perform various click gestures. The new design is responsive and makes it easier to access your favourite app from the get-go.

A 12Mp dual-lens camera with a dual-LED flash and laser auto-focus is found at the rear. At the front you’ll find a single-lens 8Mp camera, plus a front-facing speaker and a proximity sensor. Unfortunately, Honor has dropped the front-facing flash, a feature we liked in the Honor 7. More on the cameras below.

Honor 8 review: Core hardware and performance – How fast is the Honor 8?

The Honor 8 is a powerhouse, with a Hisilicon Kirin 950 chipset running on an octa-core (4x 2.3Ghz Cortex A72 + 4×1.8Ghz Cortex A53) CPU. This runs alongside an i5 co-processor which aids small operations, the architecture is based on a 16nm FinFET technology, the same type used in the latest GTX10-series Nvidia graphics cards, but for this phone’s GPU there’s the Mali-T880 MP4.

In our benchmarks we found very impressive processing and computing performance, easily beating other flagships in the market. It couldn’t quite keep up with the Samsung Galaxy S7, however, and particularly in our GFXBench graphics tests (in which the Quad-HD-screen Samsung has a disadvantage). Even against its full-HD OnePlus 3 rival, though, the Honor 8 managed only 7fps in comparison to its 18fps in Car Chase.

In real-world usage, we found the Honor 8 to perform smoothly in Asphalt racing games, and games such as Pokemon GO. The general user experience was fluid with no noticeable lag or interruptions between annimations.

We also found its JetStream browser benchmark underwhelming, with its 46.3 score falling short of the Samsung Galaxy S7 (61) by quite a margin. Read next: What’s the fastest phone.

The Honor 8 doesn’t support Qualcomm Quick Charge, but using the included 9V/2A charger it can get from zero- to 50 percent in just 30 minutes. Read next:  Best power banks 2016 UK.

The Honor 8 comes with 32-or 64GB of internal storage, and supports micro-SD cards up to 128GB for expansion. However, the micro-SD occupies the same slot as the second SIM, so you can’t have both at once. Read next: How to get more storage in Android.

The Honor 8 is a dual-SIM dual-standby phone, with the primary slot offering 4G connectivity and the second 3G. Read next: Best dual-SIM smartphones 2016.

In terms of other connectivity, you also get 802.11a/b/g/n/ac dual-band 2.4GHz and 5GHz Wi-Fi, Bluetooth 4.2, A-GPS and GLONASS. Also see: How to tell whether a phone is supported by your network.

The Honor 8 also has NFC capabilities, which is great for quickly pairing your phone to Bluetooth accessories or even using it to pay for purchases.

For its primary camera the Honor 8 has two 12Mp Sony IMX286 sensors with a dual-tone flash.

The two rear-facing cameras combine to capture stunning shots. This is the same tech as is seen inside the Huawei P9, which combines the image captured by the monochrome- and RGB sensors to produce the final image. Images are accurate, colours pop, and the Honor 8 performs very well even in low-light conditions, with greatly reduced image noise over the Honor 7.

Results are fantastic, which is partly due to the plethora of options. Our favourite is the ability to change the aperture and focus of the image after it has been captured. The Honor 8 holds its own versus the likes of the Samsung Galaxy S6, iPhone 6s, the Lumia 950 and the BQ Aquaris M5. Read next: Best phones 2016.

We were also impressed by the Pro camera mode, which allows you to fine-tune your settings as you would on a manual SLR camera. Granted the options aren’t as in-depth as an actual camera, but photographers can at least use the Honor 8 as a secondary point-and-shoot camera.

The rear cameras can record full-HD (1920×1080) video at 60fps, but it doesn’t support 4K. The front camera also records at 1080p, but is limited at 30fps. We found the video quality to be consistent, faily well stabilised and full of detail when shot in full-HD.

At the front of the Honor 8 there’s an 8Mp camera, but unlike the Honor 7 it has no flash (you can create the effect using software, with the screen flashing white before it takes a selfie).

The front-facing camera provides less saturated colours and more accurate images than its predecessor. As with other Honor devices, you have a flurry of options to choose from when taking a photo, including Beauty mode, which softens the colour tone of your skin.

Other features found within the camera app, include filter mode, beauty shot, panorama, time-lapse, good food, light painting and HDR. The light painting feature is nice, a feature we also liked in the Honor 7. Read next: Best phone camera 2016.

You can edit captured images within the photo app and those with the aperture sign at the bottom of the image can also have their focus altered.

In comparison to its competitors, the Honor 8’s camera is truly fantastic. Honor has done a great job in providing a high-spec camera for £369.99.

The Honor 8 has a single downward-firing speaker, which unlike its predecessor, the Honor 7, has its located on the right-hand side. The phone doesn’t suffer from any distortions at maximum volume, but when held in-hand you can feel the speaker’s vibrations at the lower-back chassis of the phone. The phone has the same loudness levels as the Honor 7, scoring a 7/10 in our loudness rating. Also see:  Best Sounding Phones of 2016.

The speaker’s sound quality was vastly different from the Honor 7, with a great emphasis in the mids and highs. When we compared it to the Honor 7, we found that the new Honor 8 didn’t have any sub-bass or mid-bass presence, but did make up for its low-end frequency loss in its mids, which were forward sounding and accurate. We did find the highs to have a nice sparkle, but did sound slightly sibilant.

The soundstage was intriguing, where we found the Honor 8 to have a somewhat surround sound, even though it only had a single downward-firing speaker.

The Honor 8 uses the same HiSilicon Hi6402 Audio DSP (with a smart amplifier) as the Honor 7. it therefore uses a SoC (system on chip) design, utilising the HiSilicon Kirin 950 chipset to power its internal audio.

Just like the Honor 7, the Honor 8 had to be cranked up to 90-95 percent, which was a lot of volume required versus other phones found on the market that are able to deliver the same volume at a much lower percentage.

When we amplified the signal, there was negligible hissing present and a small static pop when playing or pausing music. Therefore, we were impressed by the sound isolation and minimal interference found on the Honor 8. Read our in-depth smartphone audio comparison:  Best Sounding Phones of 2016.

The internal sound quality was identical to the Honor 7. When A/B testing we couldn’t hear a difference between the two phones. The Honor 8 has a good low-end presence with a sub-bass extension to be praised and a mid-bass slam that was both controlled and accurate.

The mids are forward sounding and its highs extend well, although could have had a touch more sparkle to them.

Unfortunately, the Honor 8 shares the same fate in its soundstage reproduction as the Honor 7; it lacks width and depth, but on the plus side still has good instrument separation.

Honor has yet again used EMUI as an Android skin. In this case EMUI 4.1 running on Android Marshmallow 6.0. Read next: Android 6.0 Marshmallow review.

We like the non-intrusive EMUI experience, but it can be a performance hog in comparison to stock Android.

There are some subtle tweaks, for example you can use the fingerprint sensor to swipe down and reveal the notification panel, or click on the Smart Key to open an app.

A number of bloatware utilities and apps are preinstalled on the Honor 8, but you will be able to uninstall most of these.