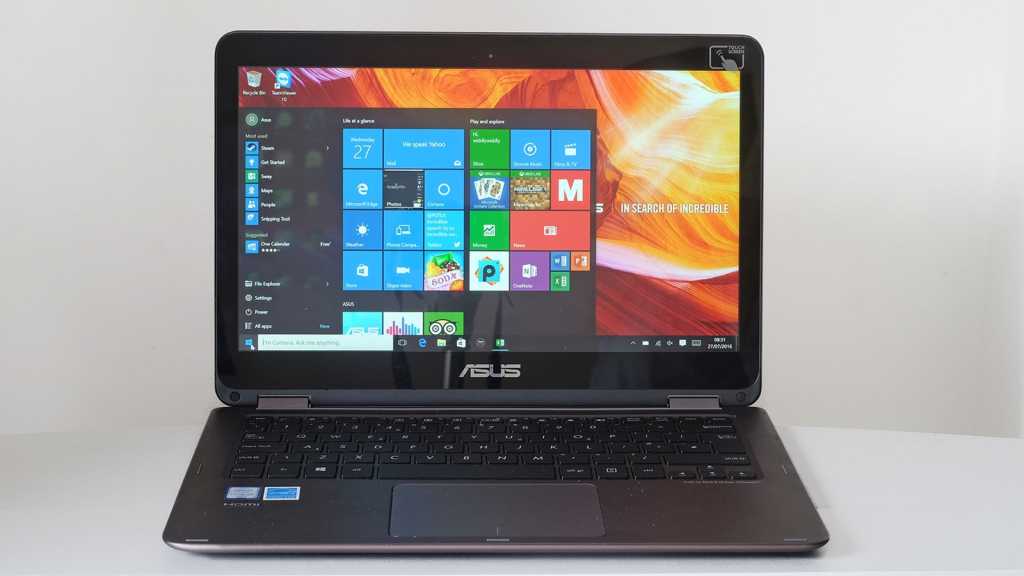 Asus has been in a rich vein of form with the ZenBook range. It has been the go-to place to find an ultraportable laptop that won’t break the bank. However, this new 360-degree hinge version ultimately disappoints. Issues include a drop in build quality, a problematic trackpad and a display that, while good in several respects, has a dated and highly reflective screen architecture. Having liked and loved several previous mid-range ZenBooks, we were hoping to have similar feelings about the Asus ZenBook Flip UX360CA. Its concept is sound, and so is the hinge that brings that concept to life. However, the new benefits are outweighed by the new problems. Hopefully they’ll be addressed in a future update of this design.

Asus was among the first companies to popularise hybrid laptops/tablets. The Asus ZenBook Flip UX360CA is the result of experience applied to the fantastic affordable ultrabooks the company has made recently, such as the Asus ZenBook UX305.

This isn’t as much of a smash, though, suffering from some build quality issues and a problematic screen. At £699 it’s a qualified success that’ll still suit many people, but is harder to recommend than some of Asus’s superb non-hybrid UX-series laptops. See also: Best laptops to buy right now

The recommended price for the exact version of the Asus ZenBook Flip UX360CA we’re reviewing is £699. That gets you an Intel Core m3-6y30 CPU, a 128GB SSD and 8GB RAM. It has only just gone on sale, and prices are currently higher than the RRP. You can buy this model of the UX360CA from Currys for £749.99 for example. Currys has various offers, though, such as entering the code ASUS50 to get £50 off, taking it down to the recommended price. Plus, there’s 10 percent cashback, and you can trade in an old Windows laptop to get up to £200 off.

Other specs vary depending on the country, but in the UK the other main model is one with a Core m5-6Y54 CPU and a 512GB SSD. It has a chunk more power and a lot more storage and costs £999.99.

We’ve reviewed the grey model, but you can choose gold if you prefer.

The Asus ZenBook Flip UX360CA is a hybrid laptop, but the sort of hybrid that looks and feels exactly like a normal computer. Its screen doesn’t detach, the hinge simply rotates all the way around, like one of the Lenovo Yoga laptops.

As such you’re not going to get an entirely satisfactory tablet experience, but with a 13.3in screen the Asus ZenBook Flip UX360CA is more laptop than tablet anyway. This design also lets Asus keep all the main component in the base rather than the display, an important part of helping a laptop keep its balance.

Despite not looking at all bulked-up, the Asus ZenBook Flip UX360CA hinge has the strength to hold the screen at any angle. Unless you’re actually thinking of using this like a tablet, the lead benefit is being able to rest the laptop in very cramped spots, whether that’s propped-up on a bed to let you watch Netflix pre-snooze (not recommended if you value your sleep) or on the little tray table of a plane or train.

With this size of display in tow, it’s likely going to be more useful than a full-on detachable hybrid design.

The flex-hinge comes with some build quality compromises elsewhere, though. Like other UX-series laptops the Asus ZenBook Flip UX360CA is made of aluminium, so feels fantastic. However, the quality of some parts is surprisingly poor. Compared to the highly-regarded Asus UX305CA, there’s an awful lot of keyboard flex.

Simply pressing down on a key in the centre of the keyboard causes the entire surround to bend inwards. Despite having an aluminium lid, insides and underside, the Asus ZenBook Flip UX360CA does not feel entirely well-made in use.

This is a real shame as the laptop otherwise looks great.  All sultry dark bronze aluminium, and with the ZenBook staple concentric circles texture on the lid, it comes across as a real rival for the MacBook range.

Connectivity is fairly good for an ultra-slim laptop too. It tries to cater for all by offering a range of full-size and miniature connectivity standards.

On the full-size squad we get two USB 3.0 ports, an SD card slot and a combined headphone/mic 3.5mm input. In team mini are a microHDMI port and a USB-C connector. The USB-C is 3.1 ‘Gen 1’ compliant, meaning its bandwidth is 5Gbps. That’s the same standard as the 12-inch MacBook.

If you want to hook the Asus ZenBook Flip UX360CA up to a TV you may need to buy a new cable to fit the microHDMI socket, but this is a decent array for a hybrid. Camera owners in particular should be very happy Asus chose to use a full-size SD slot rather than a phone-style microSD one.

There’s a lot to like about Asus’s sensibly-priced ZenBooks. Where the Asus ZenBook Flip UX360CA runs into trouble are areas a little more specific to this model.

The screen is a top offender. While perfectly good from several perspectives, the LCD display appears grey rather than black. This is not because the black level of the panel is particularly poor, but because the display is not fully laminated, a process that removes air gaps between the display and touch layers of a screen.

Even when the laptop is off, in a well-lit room the screen look grey against the black surround. The more expensive ZenBook UX501 suffered from there same issue, caused by a small amount of light reflecting off these display layers.

Using our test colorimeter, the Asus ZenBook Flip UX360CA results are actually respectable, with native contrast of 700:1 and colours that covers a decent 89% of the sRGB colour gamut (and 61.5% of Adobe RGB). Colour calibration fine for a mid-range model too, with an average Delta E of 0.2 (max 0.97).

The air gap issue robs the Asus ZenBook Flip UX360CA of almost all of its punch and immediacy, though. Its panel is fine, but in-situ it looks disappointingly weak. This laptop is also less handy for outside work than matt alternatives like the UX305C. It’s just too reflective for comfort, faring much worse than a normal glossy screen thanks to the greying effect.

There are a few serious knocks to what should really be a great all-purpose laptop. Round 2: the flexing keyboard surround also affects the typing feel.

Only a moderate typing touch is needed to cause the whole keyboard to bow, which making typing feel spongier, less crisp and distinct than it otherwise would. It’s worse than the feel of the other ZenBooks we’ve reviewed.

However, the typing feel is not flat-out bad. The keys are well-positioned and of a good size. It’s just far from the best Asus is capable of.

Like other mid-range ZenBooks, there’s no keyboard backlight, but few ultraportables at the price provide one. If you’re keen on a keyboard light, check out the HP Envy 13 (note: it’s not a hybrid).

Asus has also made significant changes to the trackpad to address some criticisms of the previous ZenBooks. Older ZenBooks have a very definitely, quite noisy, trackpad click, which has been tamed in the UX360C.

If you use the laptop on a flat surface it feels great, but if it’s not flat the flex of the shell can cause the trackpad click to disappear altogether, making it frankly disconcerting to use.

It does have the right hardware for portable purposes, though. The Asus ZenBook Flip UX360CA has an Intel Core m3 6y30 CPU with 8GB RAM.

This kind of chipset is not super-powerful, but offers great performance up to a certain point. Buy the Asus ZenBook Flip UX360CA for roving office-style work, for movie-watching and idle browsing. For these tasks it’ll feel about as fast as anything out there. Just don’t buy it for gaming or anything particularly demanding.

In PC Mark 8, the Asus ZenBook Flip UX360CA scores 2063 points, which is less than an Intel Core i5, but the processor uses less power to get comparable real-world results for the sort of tasks for which an ultraportable like this is built. It’s also a better result than some other models with the same CPU.

Our normal gaming tests show up how much it flounders when put to graphically-intensive work. Setting Thief (2013) to its ultra-low preset and 720p resolution, the game runs at average 13.7fps. That’s far too slow to be considered playable.

The less demanding Alien: Isolation performs slightly better, at 19.7fps, but it’s a way off how the game should be experienced. If you’re a gamer, you’ll have to stick to low-demand titles like FTL: Faster Than Light or golden oldies.

Other than a high-efficiency CPU, what keeps the Asus ZenBook Flip UX360CA feeling fast for basic tasks and Windows 10 navigation is the SSD. It has a 128GB drive. That’s not much room if you need to store lots of media, but the speed is far better than that of the HDD you’d get in a low-end gaming or productivity PC at the price.

If you need a lot of raw power, we’d recommend getting a laptop with an Intel Core i5 or i7 instead. However, one of the benefits of a Core M-based system is that you tend to get more predictable, and longer, battery life because the power draw is that much lower.

The Asus ZenBook Flip UX360CA lasts for just under nine and a half hours when playing a locally-stored video, and has the juice to plough through a full day’s work of browsing, typing docs and so on.

It’s a shame, though, that in a lot of conditions where the stamina and portability are going to come in most handy, they’ll be overshadowed by the screen and build flaws.