The Note 7 at first glance appears to be an expensive upgrade, but this may not bother you if you’re getting it on a contract – which will be possible, unlike with the Note 5. If you’re prepared to pay the money it’s a fantastic upgrade, with phenomenal performance, a fantastic dual-edge screen, a user-friendly stylus, a brand-new iris scanner and upgraded cameras.

Samsung on Tuesday unveiled its new Note 7 phablet, which will be a fantastic upgrade over the Note 5. We look at some of the key differences between Galaxy Note 5 and Galaxy Note 7 in our Note 5 vs Note 7 comparison.

Note that in this article we are merely comparing the specifications. You can read our Note 7 hands-on review and Note 5 review for more in-depth information.

Samsung has not yet confirmed the official UK pricing for the Galaxy Note 7, but Mobile Fun is already taking pre-orders at £749. Officially the phone will be available to pre-order on 16 August, and those who do so will get it early on 30 August. For everyone else the Note 7 goes on sale on 2 September. You can reserve the Note 7 in Blue Coral or Black Onyx directly through Samsung now.

If we are to take £749 as the official price, the year-old Note 5 is significantly cheaper. Although it was never officially made available in the UK, it’s been possible to buy through sites such as Amazon where it currently costs £479 SIM-free. Note, though, that we are comparing the 32GB Note 5 to the 64GB Note 7 here, since Samsung has upped the amount of storage you get as standard.

It’s worth pointing out that because the Note 5 was never officially sold in the UK you cannot get it on contract here. The Note 7 will be offered by all the UK’s major mobile operators. Also see: Best phones 2016.

Note 5 vs Note 7: Design and build

Having ditched the edge+ model in its S-series line-up, the Note 7 is now the sole phablet flagship in Samsung’s range. There is only one version of the Note 7, but as standard it has the edge feature on both sides of the screen. The device is more rounded at front and rear, but the design will be very familiar to Samsung Galaxy Note 5 fans.

Importantly, the Note 7 adds IP68-rated dust- and waterproof protection. And fans of the Note 5 who were disappointed by the lack of microSD support will be pleased to see it make an appearance in the Note 7. Samsung’s new Galaxy supports up to 256GB.

As always the new Galaxy Note features Samsung’s S Pen stylus, but the version you get with the Note 7 has been upgraded over that which comes with the Note 5. It’s said to be easier to write with thanks to improved pressure sensitivity and a smaller 0.7mm tip. The new S Pen is water-resistant, so you can make notes in the rain, and it even works when the Note 7’s screen is switched off. Other new features include the ability to create sharable GIFs and support for new Air Commands. Also see: Best Android phones 2016.

Every time Samsung updates its Note line the new phone obliterates everything before it in our smartphone benchmark charts. And it sounds as though the Note 7 is going to be no different.

The Note 5 is an incredibly fast smartphone, and we clocked it at 5149 points in Geekbench 3, 37fps in GFXBench T-Rex and 15fps in Manhattan. If Samsung’s claims of 31 percent faster processor performance and a 58 percent faster GPU ring true then the Note 7 will floor the Note 5 in our benchmarks.

On paper it doesn’t look as though there are any major changes on the hardware front. However, while both phones feature 4GB of LPDDR4 RAM and an octa-core 64-bit processor, the Note 7’s CPU is clocked faster at 2.3-/1.6GHz quad compared to the Note 5’s 2.1-/1.5GHz quad. The GPU also uses the Vulcan API.

We don’t have benchmark results for the Note 7 just yet, but we do know that it uses the same processor as the Samsung Galaxy S7, which is the Exynos 8890. In our benchmarks the Galaxy S7 scored 6466 points in Geekbench 3 multi-core, 129,077 in AnTuTu 3D, 53fps in GFXBench T-Rex and 27fps in Manhattan, and 61 in JetStream. Also see: What’s the fastest phone 2016?

As we mentioned earlier, storage as standard has been increased from 32GB in the Note 5 to 64GB in the Note 7. Samsung has also introduced a microSD slot to the latter model, which lets you add up to 256GB.

The Note 7 is the first in the Galaxy family to feature the new USB-C port for charging and data transfer. This is reversible, which is convenient, and future-proofed. The Note 5 has a Micro-USB port by comparison.

One of the headline new features in the Note 7 is the iris scanner, which is used for extra secure logins. Both phones support the touch-style fingerprint scanner, too.

4G has received a boost in the Note 7. Whereas in the Note 5 it maxed out at 300Mbps Cat.6,it’s now up to 450Mbps Cat.9. The Note 7 otherwise has much the same connectivity specs as the earlier model, including support for NFC and MST for payments services – both Note 5 and Note 7 will support Samsung Pay. 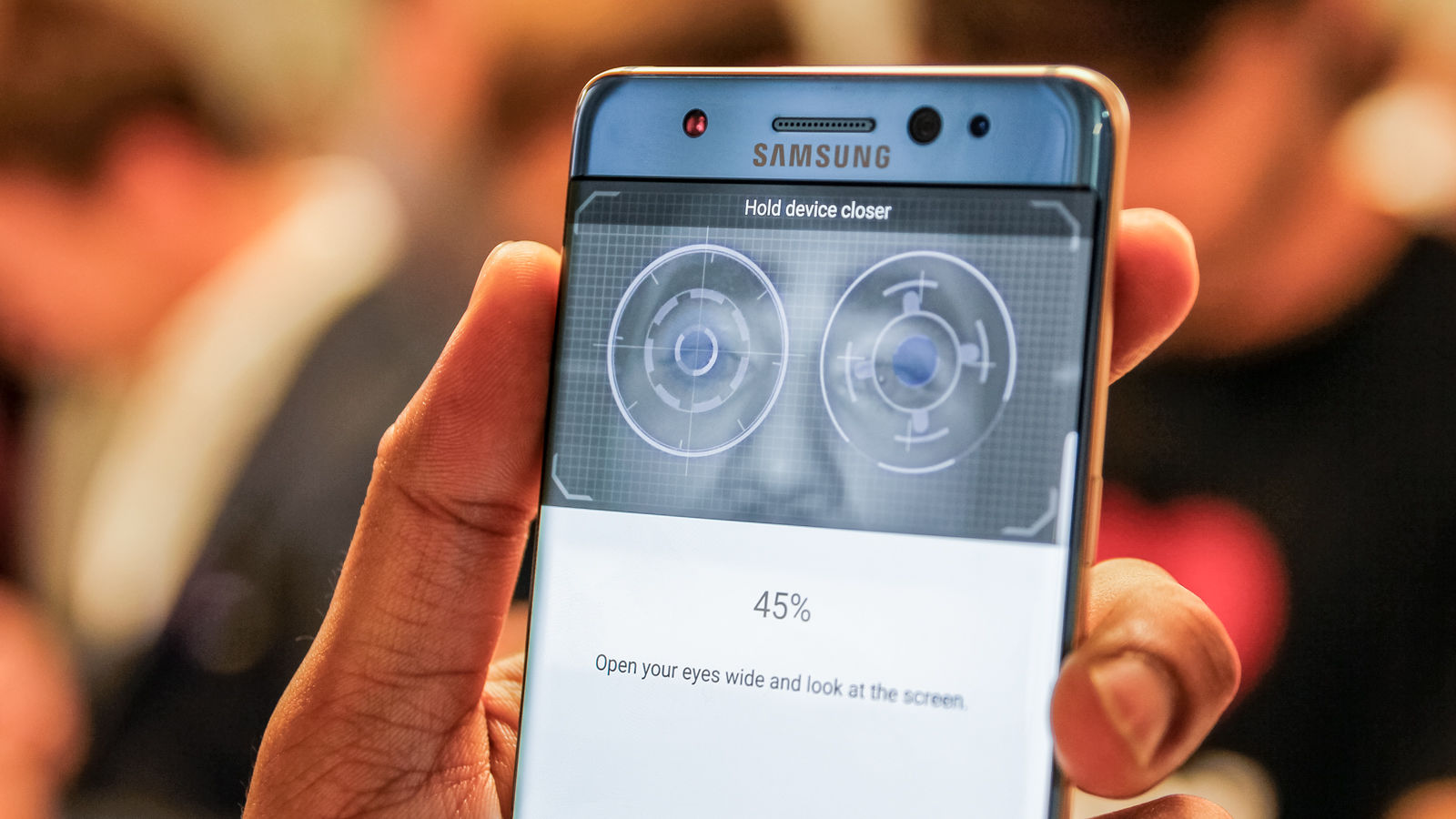 The Galaxy Note 7 has followed the Galaxy S7 in the camera department, too, adding its 12Mp Dual Pixel camera with f/1.7 aperture and smart OIS. The Note 5 has the 16Mp, f/1.9 camera seen in the Galaxy S6. You can see how the Galaxy S7’s camera fares in our  Galaxy S7 review, but we have yet to properly evaluate the Note 7’s camera. Also see: Best phone camera 2016.

Selfie cameras are rated at 5Mp for both phones, with the aperture now at f/1.7 rather than the f/1.9 in the Note 5.