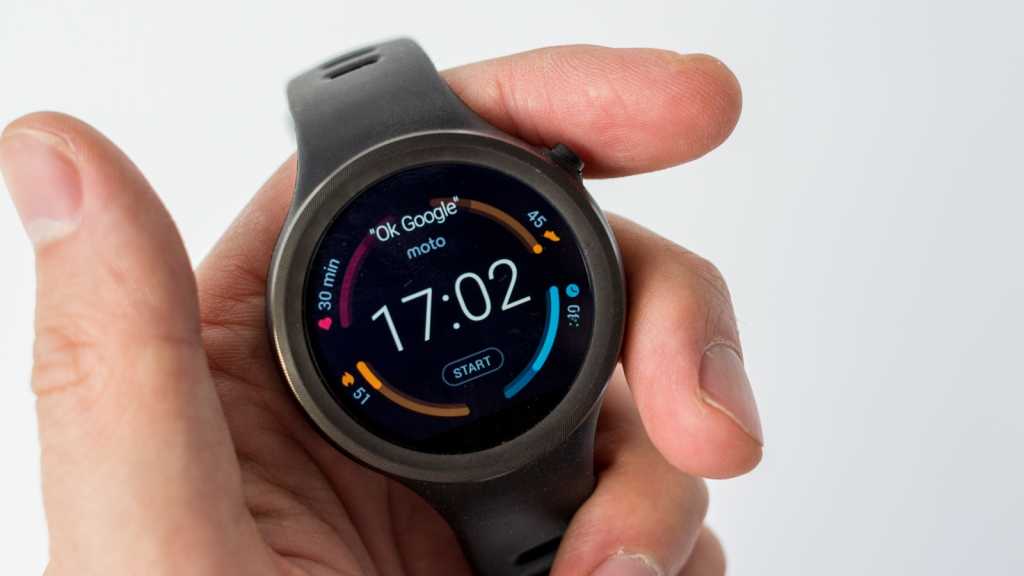 Available for under £200, the Motorola Moto 360 Sport is one of the best smartwatches for fitness. You get the some of the regular 360 style in a design which is practical for activities like running. The GPS tracking is accurate but it’s shame the same can’t be said of the heart rate monitor and we still find the ‘flat tyre’ on the screen an eyesore. A solid effort but hard-core fitness fans might need something which is more in-depth.

Looking for the best smartwatch for fitness? Well the Moto 360 Sport is a contender with Android Wear, GPS and a heart rate monitor but it’s not flawless. Read our Motorola Moto 360 Sport review to find out if it’s the right choice for you. See also: Best smartwatches

In terms of RRP, the Moto 360 Sport price is £219 from Motorola, just a tenner cheaper than the regular Moto 360. However, both smartwatches are available for less now.

For example, you can pick up the 360 Sport for a reasonable £186 from Amazon which isn’t bad at all.

As you can learn from the name, the Moto 360 Sport is a smartwatch for fitness so it has a different design and build compared to the regular model.

It still has the Moto 360 style so is easily recognisable as a Motorola smartwatch with the traits of the second-generation watch including the power button at 2 o’clock and the micro-etching on the bezel. The case size is 45mm which is a tiny bit smaller than the larger Moto 360 but the watch is slightly thicker at 11.5mm. It’s not heavy at 54g.

The main difference is that the watch is enclosed in an all-in-one silicone strap. Build quality is just as good but clearly the emphasis is on the practicality rather than the style. You can’t personalise it with the Moto Maker but the fitness smartwatch is available in white or ‘Orange Flame’ but you’ll only find black at most retailers.

Opting for a silicone strap might not look as good but it works much better for activities like running. The stretchy rubber means it stays put while you’re moving your arms around and can easily be cleaned – handy since dust and dirt tent to stick to it. The Moto 360 Sport band can’t be removed though which is a little strange but perhaps means things are held together better.

Like other Android Wear smartwatches, the Moto 360 Sport is IP767 rated which means it’s both dust and water resistant. Running in the rain and slashing it to clean it is fine but you shouldn’t be fully submerging it.

The stealthy black look of our sample is almost uninterrupted apart from a small section on the left side of the body. Here a hole in the silicone exposes the metal body of the watch where the microphone lives.

The core Moto 360 Sport specs match up to the non-fitness model (and other Android Wear devices). The combination of a Qualcomm Snapdragon 400 processor, 4GB of storage and 512MB of RAM is very familiar. It’s no surprise that the watch runs smoothly in operation.

The Moto 360 2 is available in either 35- or 40mm options for the screen, but the Moto 360 Sport comes in just 35mm. The resolution matches the smaller model at 360×325. Sadly the ‘flat tyre’ – the black section at the bottom of the display – remains. This houses the ambient light sensor which the hybrid screen makes use of. As you can see below, the shape of the glass around the edge makes the screen look a bit odd, distorting the pixels but it’s not a huge issue.

Motorola claims the ‘AnyLight’ display is the “world’s first hybrid screen”. It means that indoors you’ll get the normal LCD experience but get outside for a run and the display automatically switches to a black and white mode which reflects natural light. We found it worked pretty well.

The battery is the same size as the smaller Moto 360 at 300mAh and you’ll probably need to charge it every night, especially when you go out for a run during the daytime. It’s easy to charge the Moto 360 Sport though with the docking station which sits nicely on a bedside table and provides wireless charging.

To be the best smartwatch for fitness GPS is essential and is the main spec missing from the regular Moto 360. When you’re out for a run, it’s easy to start tracking via the custom watch face using the pre-installed Moto Body. You can also use other running and fitness platforms if you like though including Google Fit, RunKeep, Strava, Under Armour Record and even FitBit.

You get all the details you’d expect such as pace, lap time, distance and more – plus you don’t need to go running with your phone which is a bonus. You can even listen to music if you store music on the Moto 360 Sport and use Bluetooth headphones. Just remember to sync the data for your runs with the paired smartphone because it won’t stay there forever – this caught us out and we lost the info for a number of long walks we did on the Acer Scilly Media Challenge.

To accompany the GPS is an optical heart rate monitor on the back of the watch, just like the normal 360. This can measure your heart rate continuously but while it’s pretty accurate for resting heart rate, it can be very erratic when you’re running. Like other Android Wear smartwatches with heart rate monitors, you can’t fully rely on it for accurate data; therefore real enthusiasts will want to look elsewhere if this is important.

That’s pretty much everything covered aside from the fact that the Moto 360 Sport has Wi-Fi (in case you’re not connected to a phone over Bluetooth) and runs on Android Wear – compatible with Android and iPhone –  so you can use it like any other smartwatch on Google’s platform. You’ll get notifications to your wrist and you can do all sort of stuff like voice commands and even get directions on Google Maps.