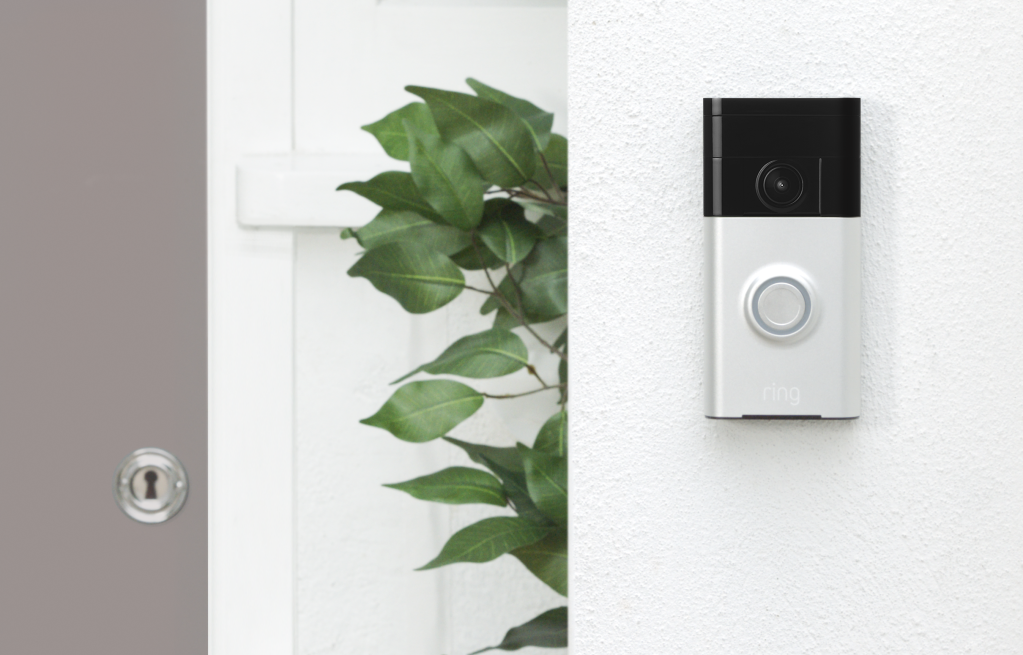 Despite a couple of flaws here and there, Ring is a favourite of ours. The ability to be notified on multiple devices whenever somebody is at the front door is very handy, and the fact that you can view a live video stream and even interact with the visitor via your smartphone, tablet or computer provides extra security for those that may need it. The 720p HD camera isn’t the greatest quality in the world, but is more than enough to identify who is at your door and thanks to the two-way communication system, you can even talk to the visitor without opening the door. It’s easy to set up, the app is easy to use and the lifetime replacement offer is too tempting to say no to.

Smart home security systems are becoming more and more popular in the UK with the likes of MyFox, Netgear and Piper all releasing smart security cameras that can be accessed via smartphones and computers. But what about the front door?

While smart doorbells are relatively new in the UK, US residents have been using them for a while and Ring is one of the more popular options.

Note that this is the original model from 2016 and you might want to take a look at our  Ring Video Doorbell 2 review.

nd will come with the doorbell itself and not much else. Those that require a chime unit which will sound inside your home when someone presses the button can buy one for  £24.99 from John Lewis, but with the ability to be notified on almost any smart device, we would only buy one to use as a backup (and for those at home without the app).

The Ring Doorbell is certainly interesting looking, and is far from discreet in terms of design. The rectangular doorbell looks sleek, modern and exciting looking, but some may argue that it draws attention to itself -especially the light-up LED ring around the button and the fish-eye camera staring back at you. However, Ring comes in a number of different finishes (Satin Nickel, Venetian Bronze, Antique Brass and Polished Brass) which should help the doorbell blend into the environment around it – or at least not stick out like a sore thumb.

It is fairly big, too – bigger than we thought it’d be when looking at photos online, measuring in at 126.4 x 61.7 x 22.1mm. However, given the benefits, we were happy to have a slightly bulky doorbell next to our front door. It’s also worth mentioning that Ring was designed to be weatherproof, and the manufacturer claims that it’ll survive not only in the rain but sleet, snow and extreme heat too, so no need to detach it when it starts to rain. 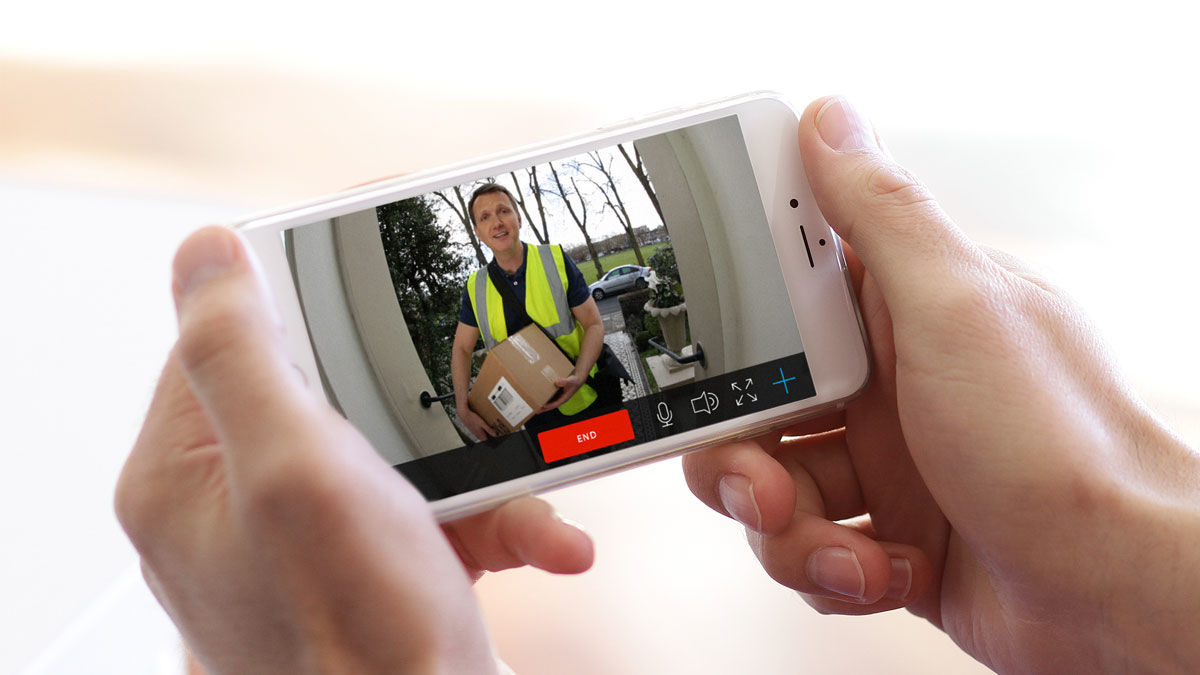 When you press the Ring doorbell, visitors are provided with visual and audible feedback in the form of an LED light pulsing around the doorbell button, and the chime of the door which is played back via the built-in speaker. We’ve all been in situations where we’ve rung a doorbell and haven’t been sure whether it actually works – this simple feature removes the guess work and will let the visitor know that the doorbell is functional, an important factor to consider when installing a battery-powered doorbell that requires charging from time to time.

Of course, the premium look and feel of Ring may potentially make it a target for thieves. While the doorbell is securely fastened during setup, users can’t protect against all eventualities – and the company understands this, which is why Ring offers a free replacement Ring doorbell if yours gets stolen for life. Yep, that’s right, if it ever gets broken, Ring should replace it free of charge. It’s great of Ring to offer such coverage, especially as it alleviates some of the worries about attaching technology to a front door where it can be easily stolen.

Before we go on to talk about the kind of features that Ring offers, we feel that we should first mention the setup process as it was one of the easiest smart home product setups we’ve ever done – and here’s why.

Ring comes nicely packaged with easy access to the doorbell, but that’s not all – the smart doorbell also comes with a tool kit with everything you need to attach the doorbell to your front door, with everything from screws to a screwdriver and even a spirit level to make sure it’s properly aligned. It also comes with fairly comprehensive video instructions (via the Ring app) that will take you through the setup process for both wireless and wired setup (for those that want to wire it into an existing doorbell setup for power or ringing).

Following the video instructions via the Ring app and using the tools provided, we had our Ring doorbell set up within five minutes of starting and as it connects to the Internet via Wi-Fi and is powered by a battery, we didn’t have to faff around with any wiring. It really was surprisingly simple to install and is something that anybody can do in our opinion.

So, what does Ring offer that a standard doorbell doesn’t? Right, where do we start? First of all, Ring features a wide-angle camera that offers a 180-degree field of view so you can always see what’s going on near your front door. While the camera only offers 720p HD video recording, we felt that the quality of the video offered by the smart doorbell was more than enough to assess who was at the front door. Of course, the quality does degrade as lighting does – it looks best on sunny days, with quality generally dropping at night.

Although the quality drops, users can still see what’s going on outside their front door thanks to the inclusion of infrared LEDs, which flood the area with infrared light and is picked up by the night-vision camera. The only downside to the night vision camera is that visitors are generally quite close to the front door, and the LEDs can shine brightly on their faces – while it’s undetectable by the naked eye, it does blow out their faces on video. See below for a screenshot to illustrate our point: 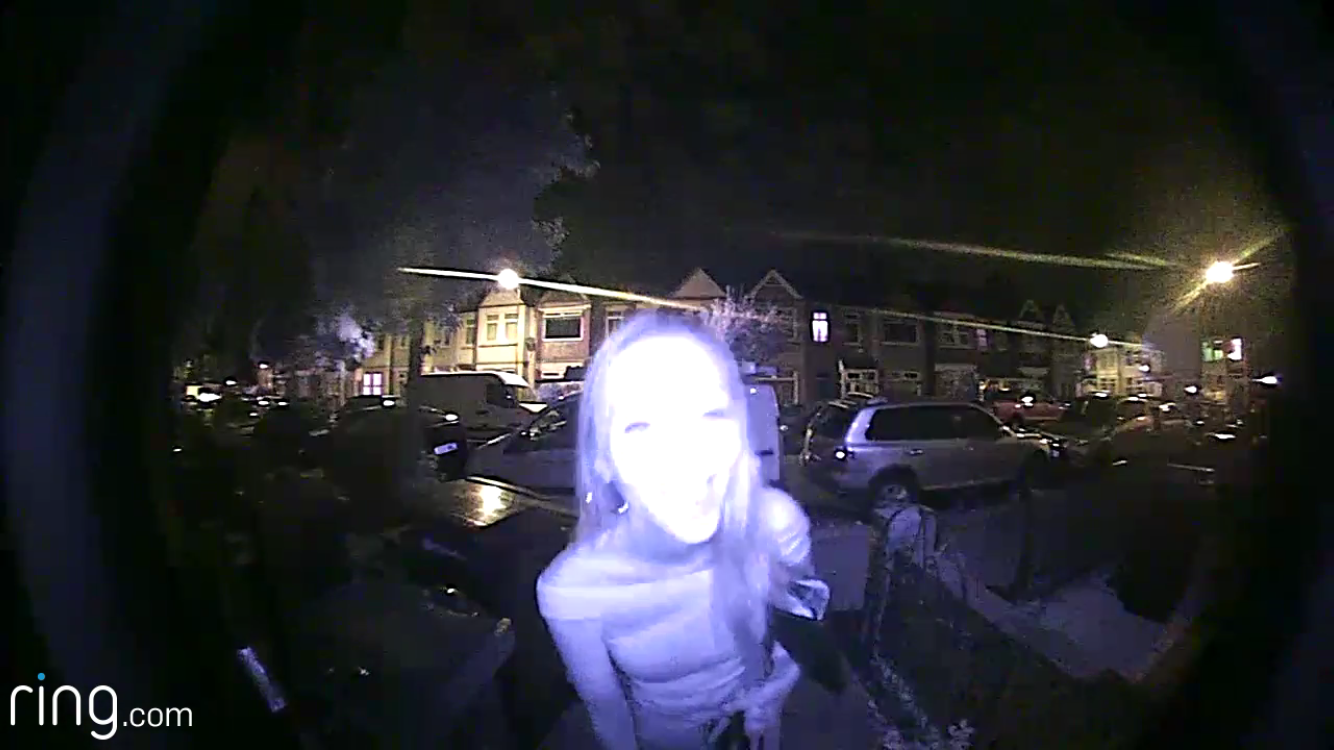 So, what actually happens when a visitor approaches your door and rings the doorbell? As soon as the doorbell has rung, you should receive a notification on all smartphones, tablets (iOS and Android compatible) and even PC and Macs (Windows 10 and Mac OS X) that have the Ring app installed – it can be installed on an unlimited number of devices, so no need to worry about limits. As well as receiving a notification on your device, a standard plug-in chime will play the same doorbell tone in case, for whatever reason, you don’t receive the notification.

Actually, before we go any further we must admit that on one or two occasions we didn’t receive the Ring notification until 10-15 seconds after the doorbell was pressed. If we hadn’t had the Ring chime plugged in near us, we would’ve missed the encounter completely – while a 10/15 second delay may not seem like much, there’s a chance it could result in a missed delivery amongst other things. Another minor bug bear with Ring is that despite being extremely high-tech with NV, an app and more, you can’t actually change Ring’s default doorbell chime – something you can do with the cheapest standard doorbells.

Anyway, once you open the notification on your smartphone, you’ll be welcomed with a full-screen live video stream of your front door. While your microphone is muted by default, tapping ‘Talk’ enables your microphone and allows you to talk directly to the person at the front door – no matter where you are. The glorious thing about a Wi-Fi connected doorbell is that you’ll be notified about doorbell rings wherever you are in the world as long as you have an Internet connection. 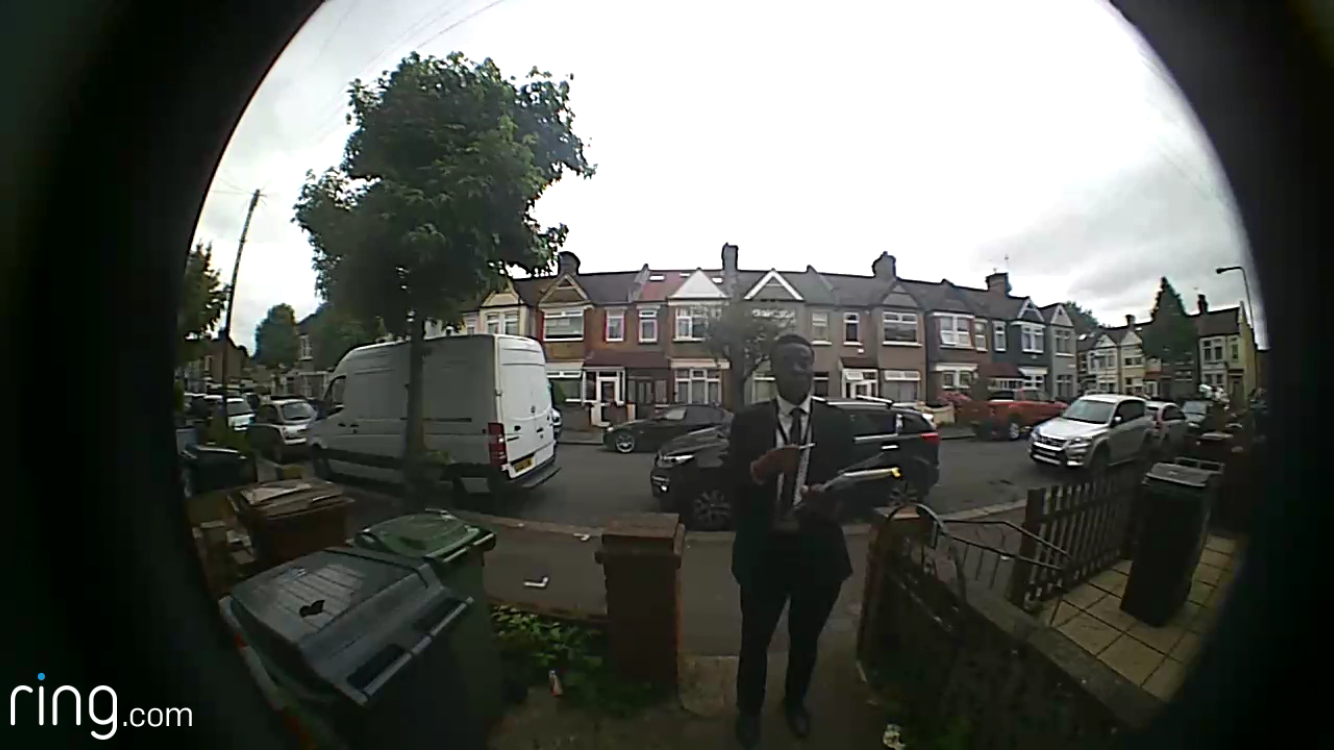 Users can pinch-to-zoom to get a better look of the person, and you can tap the ‘End’ button to end the video stream and upload it to Ring’s Cloud Storage, making it available for playback at a later date on any device. Though it seems fairly simple, having a video camera at your front door provides users (especially the more vulnerable) with piece of mind – you’ll always be able to see who’s at your front door day or night before opening it, and you can communicate with the visitor without opening the door at all.

While the cloud storage service is great and allows you to look back on visitors you’ve missed while you’ve been away, you do have to pay for the service – following a 30 day trial, you have to cough up £2.50 a month for the service despite paying over £100 for the doorbell in the first place. It’s not uncommon in the smart security industry to have to pay extra for cloud storage, but is something we don’t really agree with when there is no other alternative (i.e. SD card support).

Along with notifying you whenever somebody rings your doorbell, Ring can also notify you whenever it detects motion near your front door – in fact, it can detect movement from up to 30ft away. This means that if you have some less-than-reputable characters lingering in your front garden/by your door, you’ll know about it. It also helps keep track of who is in (and who has left) the house. 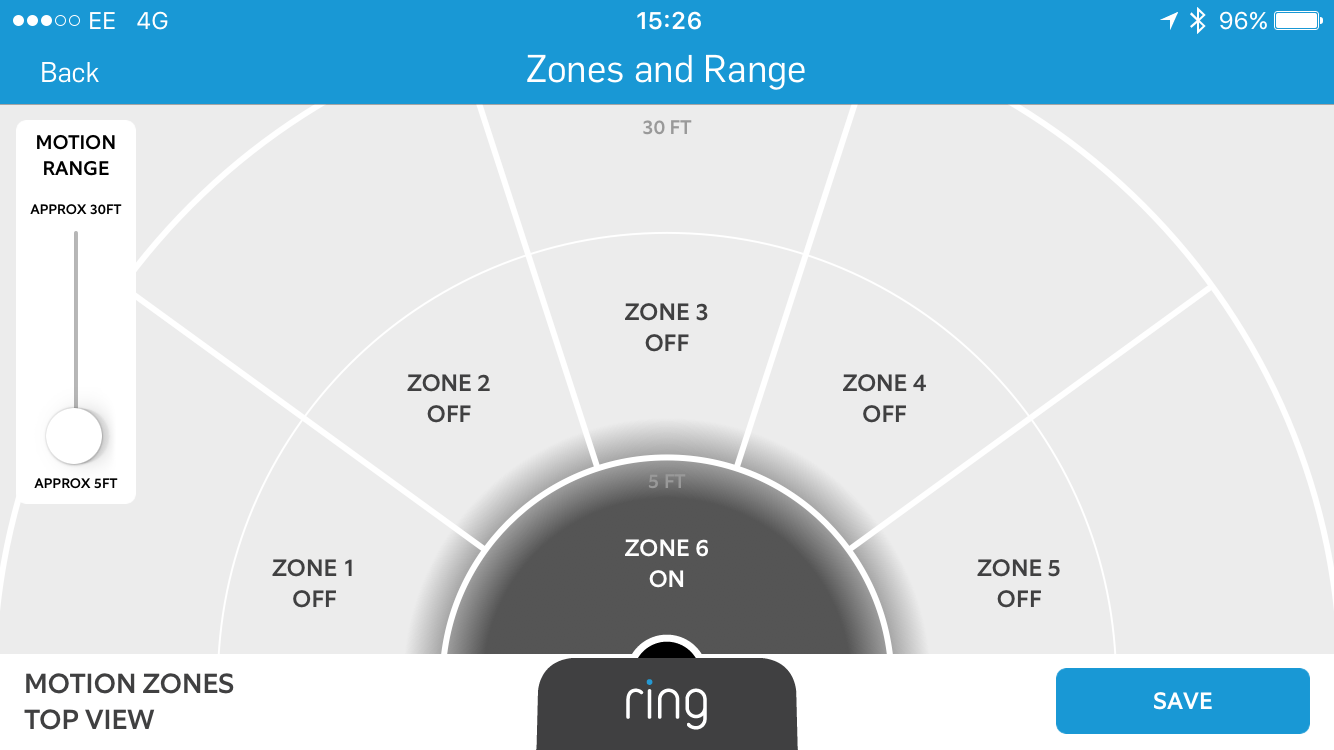 The app allows users to set up ‘zones’ to track detection in specific areas (i.e. only the left hand side of the view if your front door is right next to your neighbours) although we did have a few issues with the functionality. While Ring was phenomenal at detecting movement, even with the sensitivity at its lowest, it’d notify us about cars driving by and people walking past our house. With this being said, the feature works better with houses with large front gardens opposed to city houses that generally have small gardens or open directly onto the road, and we disabled movement notifications fairly quickly.