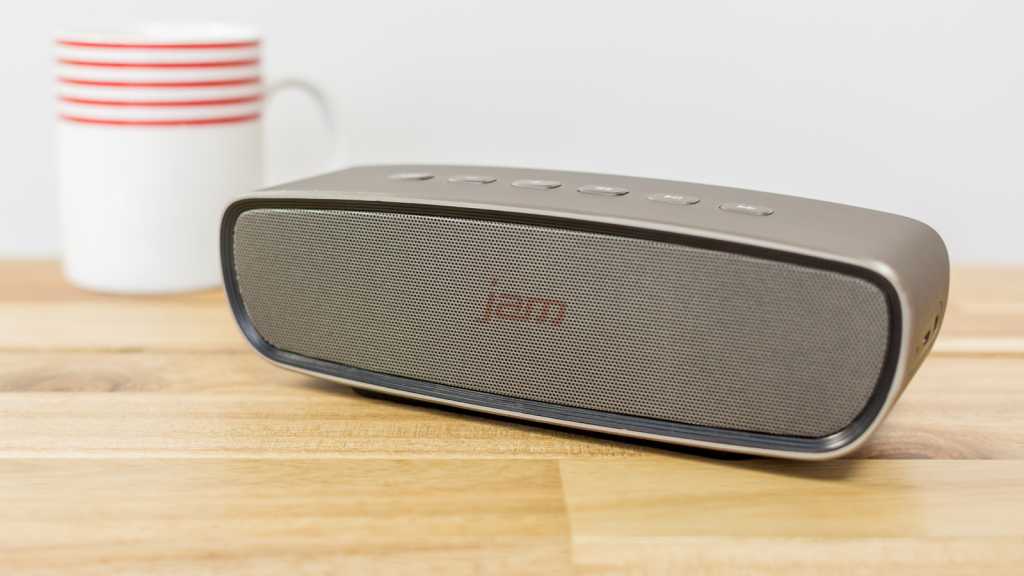 If you are trying to find a cheap Bluetooth speaker this might not be it, but it’s certainly a decent one. We were surprised at the good quality bass and mid sounds, but if you go for it just don’t overload it with treble. For small house parties or days in the park this well built speaker is worth considering if you have the budget.

The market is flooded with Bluetooth speakers. If you’re reading this, you already know that. So each time one turns up at PC Advisor towers, we’re pretty sceptical – it probably won’t do anything new, but can it do the basics right? Once that hurdle is jumped, we can begin to separate the wheat from the chaff. Luckily, the Jam Heavy Metal falls into the wheat pile, with a few caveats. Here’s our Jam Heavy Metal speaker review.

The Jam Heavy Metal sits in an awkward price range. Its RRP is £119.99,but thankfully at the time of writing it’s available for an amazing £59.99 right here.

At full price we can’t quite classify it as budget, but it certainly isn’t high end. Few Bluetooth speakers this small can try to be the latter, limited as they are by their size. The Heavy Metal measures 7.93in x 2.48in x 2.36in yet has a certain heft about it. It’s reassuringly weighty given its small stature, and that’s welcome when it costs over a hundred quid.

If you want to look at cheaper options, then here’s our round up of the best budget Bluetooth speakers.

It’s an attractive, symmetrical silver wedge made of anodised aluminium. From the front it looks like the grill of a car, with speaker holes on the front and back. The speakers are front facing, but having the holes on the rear also helps the dispersion of sound and avoids rattling of the casing at high volumes. 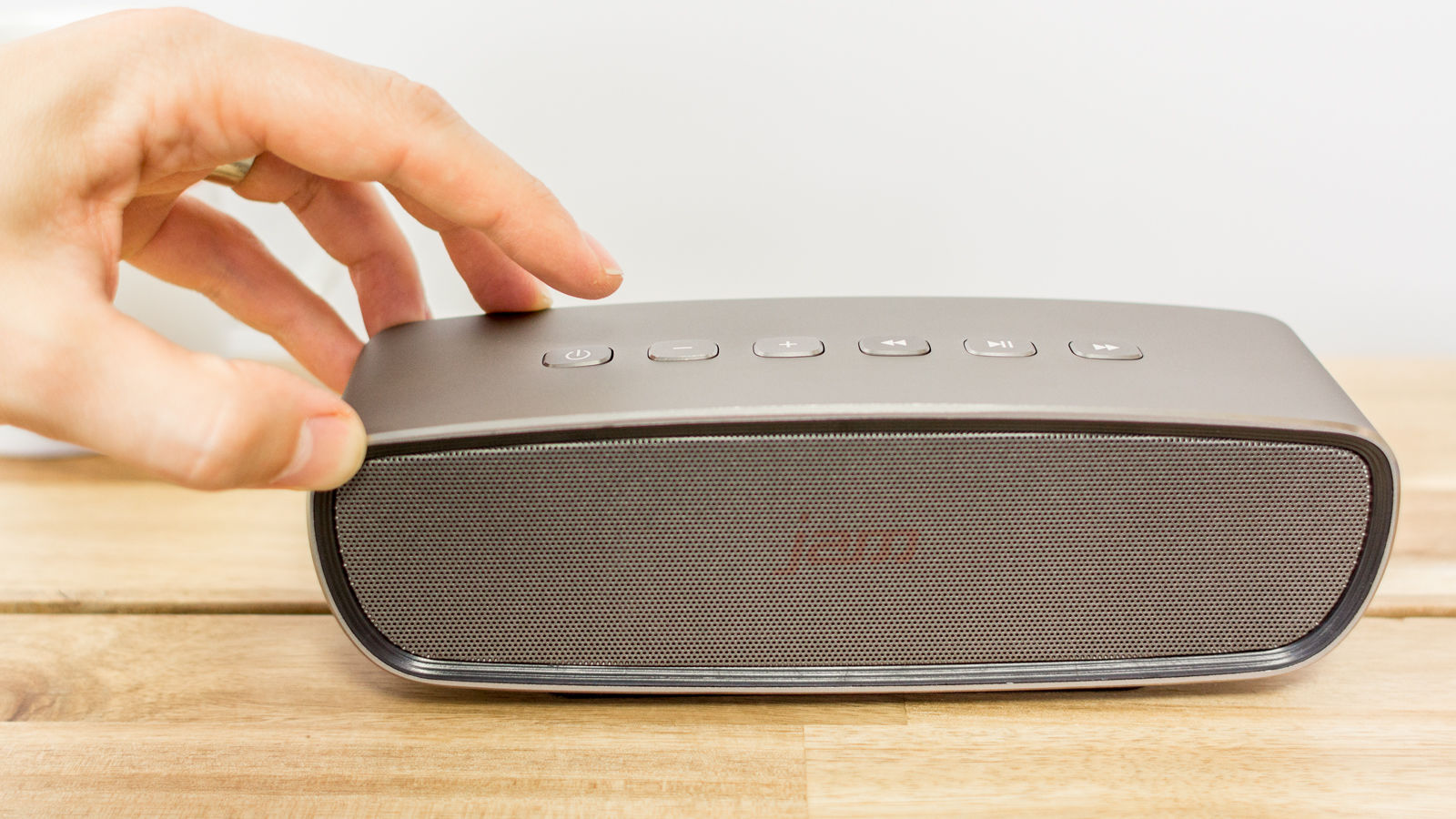 The top of the unit has six physical buttons for controlling power, volume and music playback. The power and skip track buttons are a slightly darker colour which is a subtle but nice touch to help you press the right one at a glance. Otherwise the casing is pleasingly metallic and clean. Behind the front grill there are two LED indicators – one blue that basically shows it’s on, and one red that lights when it’s plugged in and charging.

The only other features are on the right end of the unit, where there’s a microUSB port for charging, a 3.5mm jack for plugging in non-Bluetooth music devices and a small pinhole. This hole is for changing the voice command playback language between English, French, German and Italian. The Heavy Metal comes with a pin to do this as well as a microUSB cable and auxiliary cable (there’s no wall plug for the charger though).

Finally there’s a sizable rubber pad on the base to keep the speaker secure when on flat surfaces. It only adds to the premium feel of the build quality.

Here’s our list of the best high-end Bluetooth speakers.

As you’d expect, Bluetooth connectivity is the name of the game here. It’s very easy to set up a connection, and we tested it with multiple smartphones. Turning on the Heavy Metal has a voice tell you it’s on, which is handy – in fact, the packaging boasts ‘voice commands’, which made us think the user could control it vocally. This isn’t the case, and it just means that there’s a female voice that lets you know when your device is connected among other functions like powering on and off. 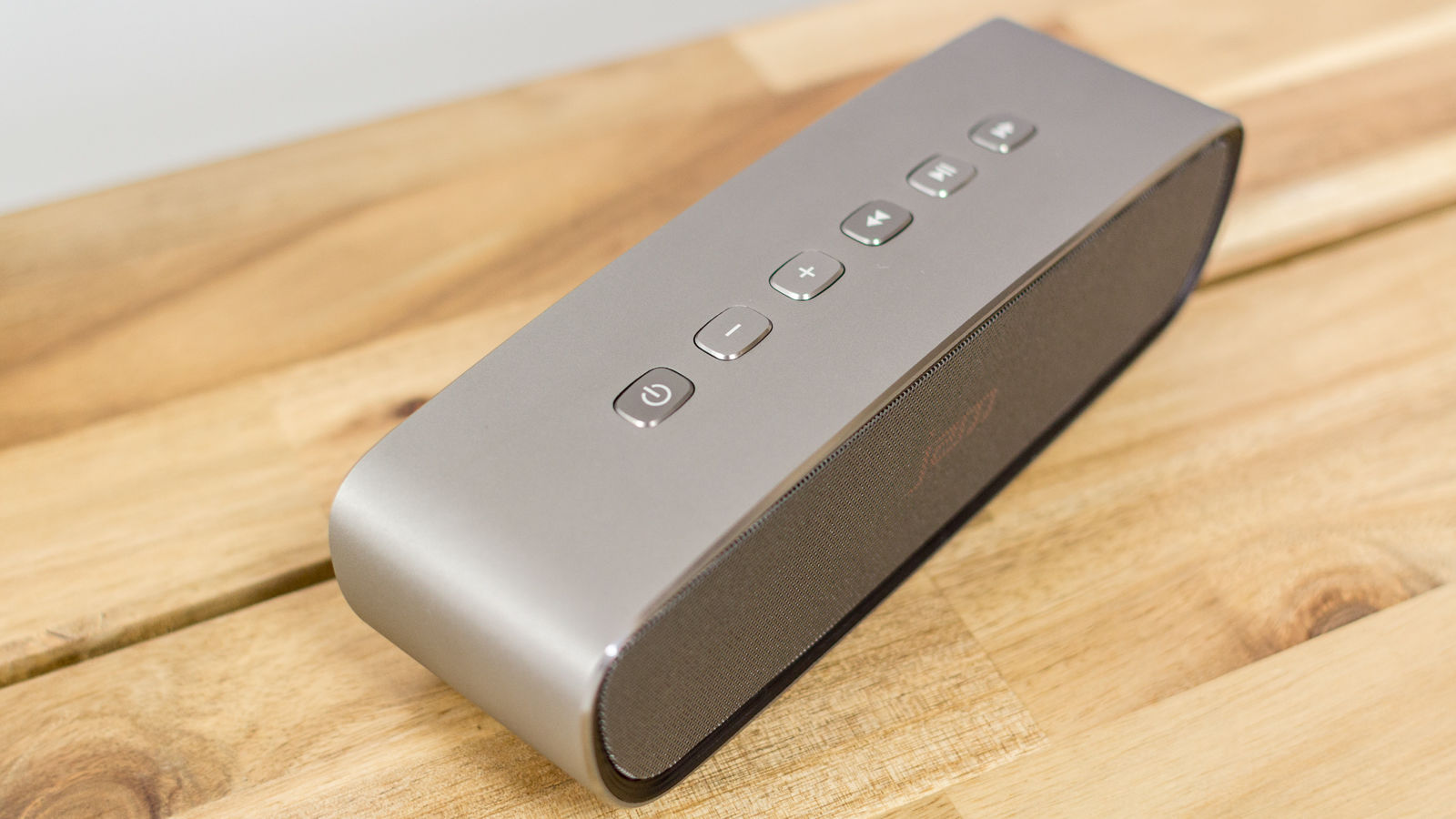 It’s a simple case of turning it on and then selecting ‘pair’ from the Bluetooth menu on your device of choice. There’s no fiddly password involved and we began playing music within seconds. Jam promises Bluetooth connections to within ten metres (30ft) and this proved about right in testing; move any further away and the playback falters. If you don’t want to use Bluetooth, there’s a 3.5mm auxiliary cable but it’s tiny, so you’ll have to leave your device right next to the speaker.

You can charge the Heavy Metal in three hours and get around eight hours of playback – this will be slightly less if using Bluetooth though as wireless playback requires more battery.

There’s also a speakerphone feature if you want to use it separately for that. It works well, but personally if we got a call at a party while using the speaker we wouldn’t be picking it up for the whole room to hear.

The Jam Heavy Metal has 20W stereo dual drivers and dual bass radiators. Sounds beefy, and it is pleasingly so with most music genres. When playing Led Zeppelin’s ‘When The Levee Breaks’, the bass response and mid range sounded just as accurate, and the high end as polished, as with Eric B & Rakim’s ‘Microphone Fiend’.

The Heavy Metal, as its name hints at, does actually work best with hard rock and less trebly music. We played Buzzcocks’ jangly ‘Ever Fallen In Love’ and were disappointed how trebly the reproduction was, but then again this is largely down to the mixing of the original track and the limited size of the drivers in the speaker.

Largely though, with a bit of fiddling between the speaker’s volume and the volume on our playback device, we found comfortable listening levels with really good low end. The bass response isn’t completely room filling, but on rock songs with distinct bass guitar lines like Interpol’s ‘Evil’, those frequencies were remarkably rounded and clear.

The Heavy Metal also played many other genres to a good level of reproduction when considering it isn’t a high-end priced product. It definitely sounds least accomplished with very trebly guitars, but in general use it reproduced most music excellently.

One thing we did notice was static on the Bluetooth channel when paired with a device, and even while playing back at low volumes you can hear a hiss. Frustratingly this is also the case when using the supplied auxiliary cable. However, if you’re listening at anything over half volume you won’t notice it – just be aware that it’s there; if you’ll be listening to podcasts or audiobooks it might be more annoying.