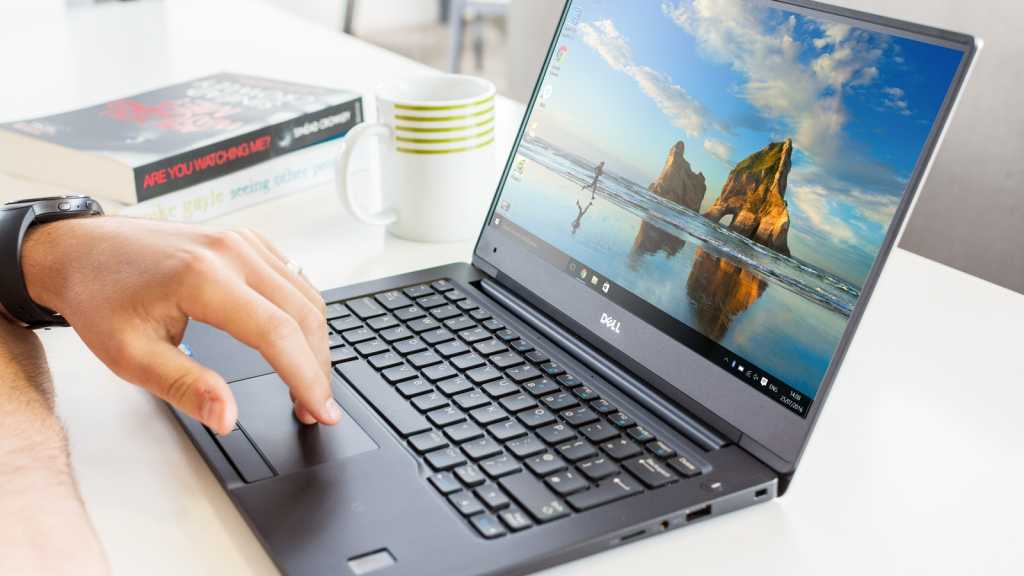 It’s a business laptop, there’s no escaping that. But our time with the Dell Latitude 13 7370 was great – it’s probably the most accessible business laptop out there, with a form factor that everyone can get along with. If you are a small business owner and you need a laptop to hook up to a monitor in your home office but also take on a business trip and not need a plug all day, then this is one of the computers you should be considering. You might not even need or want another laptop for personal use either, which goes a long way to justifying the high price.

The first thing we noticed when unboxing Dell’s Latitude 13 7370 was the screen. The premium business laptop boasts a great looking edge-to-edge display, fitting 13in of it into a portable, tidy body akin to many 12in laptops.

The 7370 takes its design hints from the company’s excellent, consumer focussed XPS 13, but it is definitely more business focussed, both in design and features. Here’s our Dell Latitude 13 7370 review.

As with many Dell products, you can customise the Latitude 7370 to suit your needs at point of purchase. The Latitude 13 7000 series, of which it is a part, starts from £1,079. Our review model had a 256GB hard drive as opposed to the standard 128GB, which means it retails for £1,159 (current offer price).

Click here to view the Latitude 13 7000 series from Dell.

This is a lot of money for one machine, whether you are buying for yourself or for a business, so let’s take a closer look at what that money actually gets you and whether the spend is worth it.

The Latitude 13 7370 differs from other Dells like the Latitude 12 7000 series or the Dell Latitude 14 7000 series simply because it is better looking. All three lines are referred to as ultrabooks, but this really feels like one. As soon as you add the InfinityEdge edge-to-edge screen to the machine it immediately looks sleeker and more of a premium product.

The good looks of the laptop extend to the rest of the machine, apart from, debatably, the keyboard. More on that further into our review.

The 7370 has a pleasant matt finish to its base half, but the outer side of the lid is a cool (in both senses of the word) aluminium that again adds to the feel, but is also surprisingly sturdy. It’s also available with a carbon-fiber cover, for just £10 more at point of sale.  There’s barely any give in the lid or the base and the detailing really makes a difference, right down to the silver rim that runs around the edges of the top half. The black matt finish on the bottom of the unit does pick up fingerprints, but unless you have a fully metallic laptop, this is inescapable. 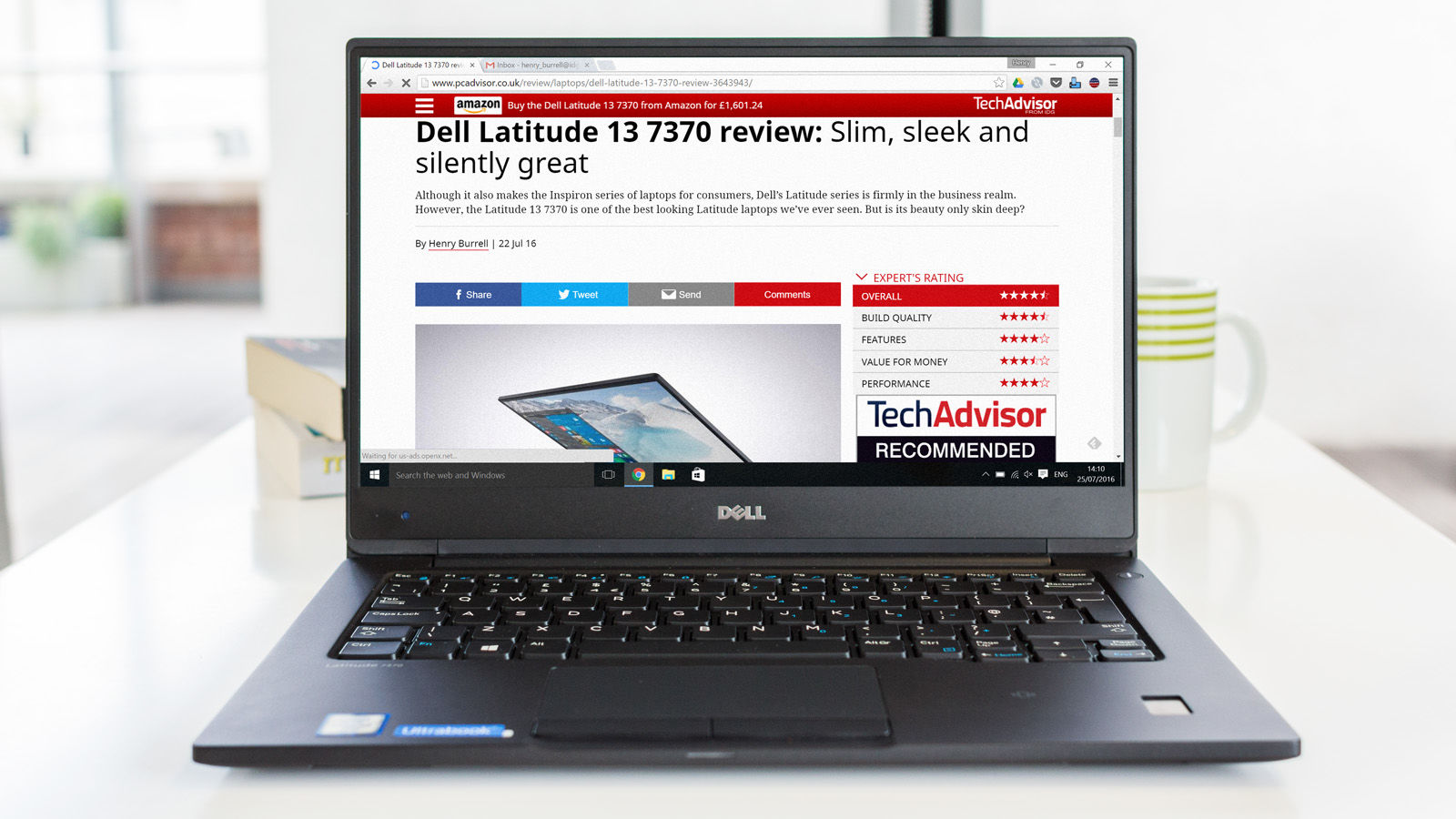 Because the Latitude 13 7370 has a solid state drive, Dell can keep the chassis down to a pleasingly portable size. Add to that a space-saving Intel Core M5-6Y57 processor, and we are looking at a seriously compact laptop given its business-orientated functionality. When open, it only measures 14.32 x 304.8 x 210.5 mm and weighs just 1.12kg.

As with the rest of its Latitude series, Dell leans on the security benefits of this laptop. Features such as Dell’s ControlVault, which allows for the processing and storage of your sensitive data, are present. A fleet of 7370s might be advisable if you’re looking to buy for enterprise or even for a small business. But the benefits of the hardware, such as the built-in fingerprint scanner, will appeal to individuals and the self-employed as well as those at Fortune 500 companies.

You won’t be embarrassed getting this laptop out on the train, and nor frankly will you really notice it in your backpack – a win win situation.

Even though the Latitude 13 7370 has a diminutive body, Dell has packed in an SD card reader, USB 3.0 port, lock slot, two Thunderbolt 3 (USB-C) ports, micro HDMI slot and room for two optional micro SIM card slots. This is excellent for a laptop of this smaller physical size.

The inclusion of Thunderbolt 3, Intel’s USB-C standard, is good to see and shows that the computing (and smartphone) indsutry is moving to adopt it over USB-A or micro-USB. Thunderbolt 3 allows for charging, data transfer, dock and display connection and charging of portable devices all through the same port. Versatility alongside universality in the coming years will ensure USB-C becomes the standard connection for the majority of laptops. 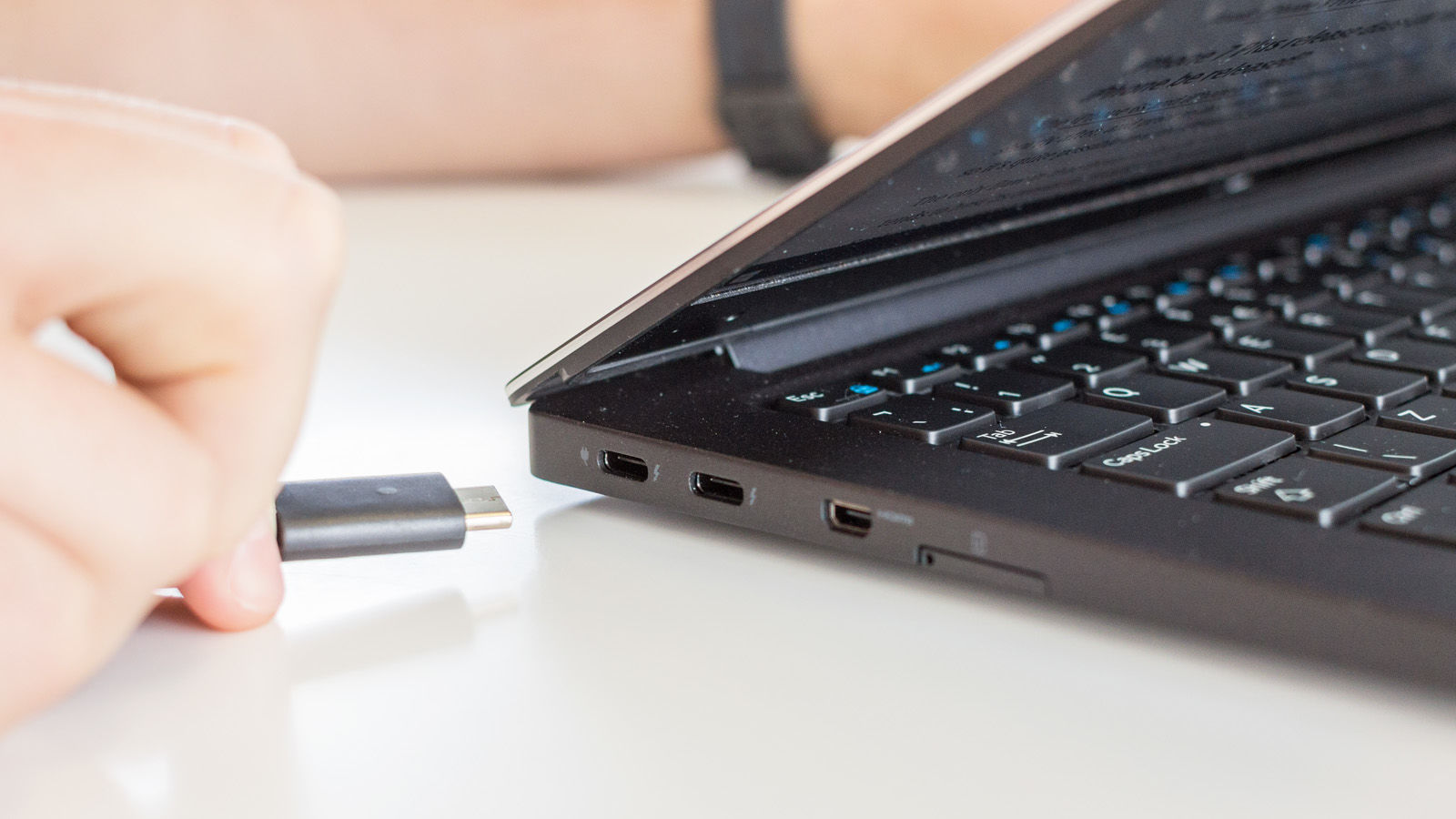 The keyboard of the Latitude 13 7370 is the biggest difference between it and consumer laptops like Dell’s XPS 13 and, more broadly, MacBooks and other competitors. It is the one give away that this a business laptop, with the traditionally more accented, raised keys. It’s a full size keyboard but somehow feels slightly cramped, though this is probably down to the admittedly small form factor. Dell has included all the Fn (function) keys you’d expect and the keyboard is backlit too but with only two brightness settings, as well as off.

We took a little while to warm to the keyboard having been used to a full desktop keyboard, but if you are used to this style of slightly concave, clicky key, then it won’t a problem. However, if you’re thinking of buying it’s always advisable to try one out before you spend.

The trackpad on the 7370 is good, but we’d like to have seen a larger mechanical one rather than the traditional two physical left and right click buttons underneath it. We appreciate this decision is likely to cater for business users used to this setup, but it means that the trackpad is a tad too small. You’ll probably want to fiddle with the sensitivity settings of both the mouse and the scroll speed before you’re comfortable using it. Of course, you can always use an external mouse. Here’s our roundup of the best PC mice. 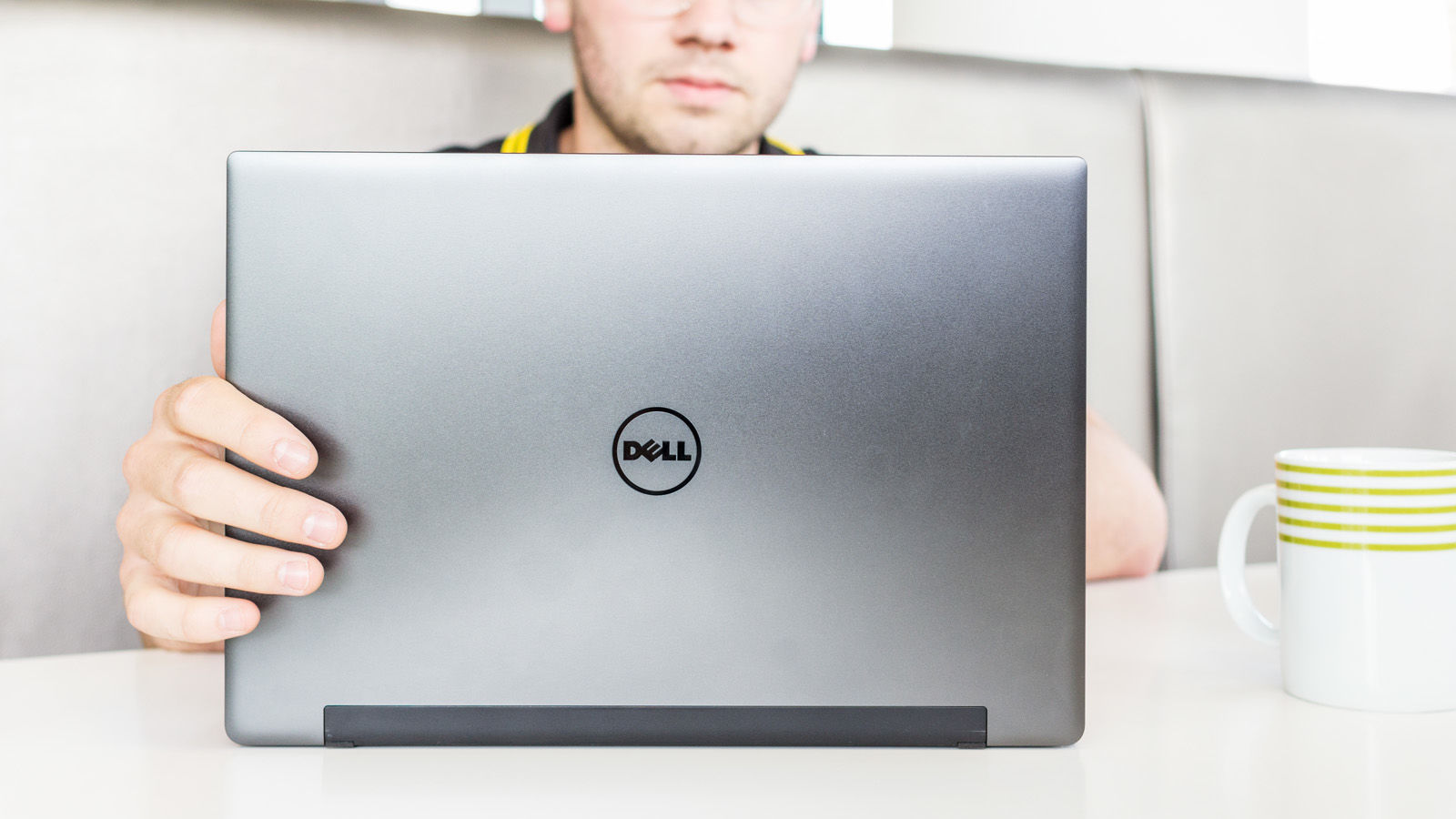 The screen is a non-touch 13.3in FHD (1920 x 1080 resolution). Colours look great and text crisp, but we found we wanted the brightness cranked right up in order to fully appreciate it. Turned down the screen has a not-too-off-putting grey tint, but a gloomy feel nonetheless. Viewing angles are excellent, and Dell claims the screen is anti-glare, but it’s no different to the majority of other machines – in direct sunlight you’ll find it hard to use.

As mentioned before though, the FHD resolution here is accentuated by the design of the screen, and the fact there’s hardly any bezel. It probably isn’t that impressive on its own, but the combination here of form and function is excellent, and Dell should be praised for that, particularly in a laptop market where Apple usually wins all the design plaudits. It’s all the more impressive here that Dell has managed it on what remains a business computer.

The Latitude 13 7000 series all ship with Windows 7 Professional, with the opportunity to upgrade to Windows 10 Professional. Our review unit ran the latter, and we found this preferable – though we acknowledge that we’re used to Windows 10 by now. Business users who may still be using Windows 7 (many companies still enforce it) might prefer that option.

The Core M5 processor more than coped with multi-tasking through Windows 10 when we were using the computer for a full day of work. Core M has a somewhat unfair reputation in some circles given that, spec-wise, it is not as powerful as the Intel Core i3, i5 or i7 processors. The advantages of M though are silent running, the possibility of better battery life and a smaller form factor alongside the adoption of USB-C. The Latitude 13 7370 runs buttery smooth with this set up and we ran some benchmarks to show you in the section below.

The Core M5 processor is more than adequate for most business users. This is the bottom line here.

Dell doesn’t quote the expected battery life in hours, preferring in its marketing to promise ‘excellent standard battery life’. This is not grammatically correct, but rest assured the sentiment is – the 7370 has truly outstanding battery life. In initial set up, we noticed that the standby time is amazing. Close the lid for hours on end and when you open it up, not only does it spring to life but the battery is barely depleted – we’re talking about a 1% drop after we left it for a day.

Do be aware though that in our standard battery test running a continuous loop of a film on Windows Media Player, the 7370 lasted 8 hours and 23 minutes – an hour less than the 12in Latitude 12 7000 series we also tested.

This good performance is down to the low-power needs of the Core M5. With no moving parts and improved performance, the chip allows not only smooth and reliable performance but also this good battery retention. It does of course go down under use, but if you are taking the 7370 between meetings all day, we’d be confident in saying you won’t need to take your charger with you. Just remember that you can’t borrow someone else’s if you run low though, because chances are not everyone will have a spare USB-C charger – give it a year or two.