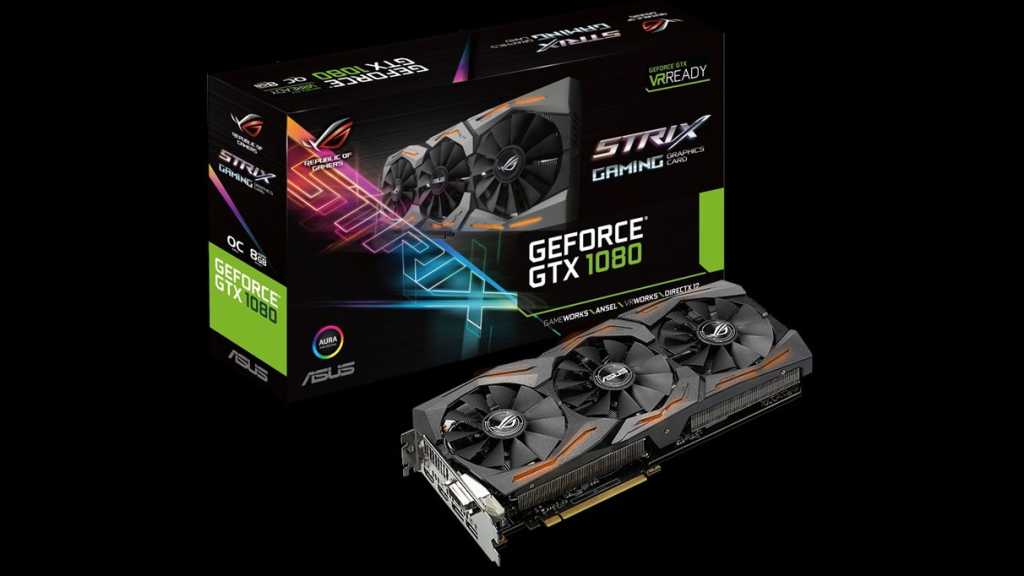 For a price premium of one decent game, you get a graphics card that’s far superior to the Founders Edition, both in terms of performance and features.  Thanks to its programmable RGB lighting, it’s especially interesting for those who want to build great-looking systems with windowed side panels. It’s also great for those who would like their PC to remain silent when not in use for gaming.

NVidia’s GTX 1080 is the fastest consumer graphics processor you can buy right now, outpacing even the mighty, and hideously expensive, GeForce Titan X. However Nvidia’s own-label version, the Founders Edition, reviewed, lacks many of the bells and whistles we have come to expect from third-party vendors. As the only version initially available, it was also a little more expensive. See also: Asus ROG Zephyrus review.

The Asus Strix GTX 1080 costs a little more still than a Founders Edition board, but has been re-designed from the ground up to deliver superior performance and features.

Prices vary enormously. The cheapest you can buy it is from Amazon for £659.99, but we’ve seen other sites charging up to £800.

Starting with the PCB, the Asus card is considerably larger than Nvidia’s reference model. It also looks completely different: not one, but three cooling fans adorn the board, fitted to Asus’s custom-designed heatsink, equipped with large cooling heatpipes.

Together, these components form what Asus calls the ‘DirectCU III’ cooler and claims will provide 30 percent better cooling while remaining three times quieter than Nvidia’s version. 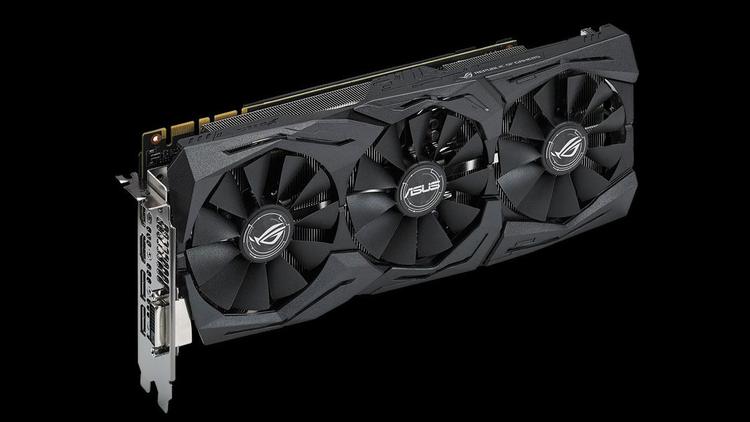 Better cooling translates to easier overclocking, while quieter operation can stop your PC from sounding like it’s trying to take off the moment you launch a game – especially if you’re teaming up two or more cards into a multi-GPU SLI system. As is often the case on high-end gaming cards, the Strix’s fans will switch off entirely for silent operation when gaming performance isn’t required.

To make sure the board has enough power for serious overclocking, an additional 6-pin power connector has been added to supplement the 8-pin socket found on the original design.

Asus has also fitted full-colour illumination both on the front of the card and on the backplate. These can be switched to any of 16 million different colours, or to any of six different software-controlled operating modes, including breathing, strobing and colour cycling as well as pulsing in response to music. You can also set the LEDs to change colour in response to GPU temperature, so you can see when you card is working hard and perhaps take action if it appears to be overheating.

For even better cooling, the Strix GeForce GTX provides additional fan headers on the board which you can connect to standard case fans fitted to your PC. The graphics card can then take control of these fans, to boost airflow directed over the board only when required.

Asus has also made a small change to the video ports by adding a second HDMI port in place of the third DisplayPort connector found on the Founders Edition. This is supposedly to make it easier to hook up a VR headset at the same time as your monitor, although in nearly all cases you’ll have no trouble using adapters to convert between DisplayPort and HDMI as required.

The version of the card we’ve reviewed comes pre-loaded with three speed profiles which can be selected from the supplied GPU TweakII software. The slowest, “Silent Mode”, sacrifices performance and cooling in favour of quiet operation, while the default, “Gaming Mode” boosts top clock speeds from 1733MHz to 1898MHz. The fastest setting, “OC Mode” pushes clock speeds further still, to 1936MHz

To get the very best performance out of the card, the software also lets you control all overclocking parameters manually. If you’re comfortable doing this sort of thing yourself, you can opt for the non-overclocked version of the card which still provides plenty of headroom for manual tweaking, just without the guaranteed performance of the factory-overclocked model. More importantly though, you should take care when ordering as the two models share almost identical model names. The one with “O8G” in the model name is the factory-overclocked version.

One notable feature of GPU TweakII is the Gaming Booster mode, which attempts to shut down any unnecessary programs and Windows services in order to prevent them from hogging system resources and slowing down your games. Having run the Gaming Booster, we did notice an increase in general responsiveness, but several programs were shut down which we would have rather kept running. For example, a trackball utility was removed causing the button assignments to be lost, as was the Corsair Link utility which is used to control the cooling system on our test rig.  You do have the ability to control manually which programs get stopped, but just hitting the button and hoping can have undesirable consequences.

When it comes to raw performance, the figures speak for themselves. We tested the board in “OC mode”, which is the fastest of the three preset performance modes. You should note that retail boards aren’t configured to use this mode by default, but we feel that if you’re going to spend the extra money on a board like this, you’re going to want to push it as fast as it can go.

As you would expect, the overclocked Asus ROG Strix GeForce GTX 1080 convincingly outpaces the Founders Edition, but you need to be pushing it to the very highest resolutions to see much useful difference. Up to 1080p resolutions, there’s really no performance advantage to be seen, but once you hit 4K, gains of around 10 percent are apparent in Alien Isolation. Asus cites performance increases of 5.7percent to 7.4percent over the Founders Edition, so we can confirm that even better gains are possible. One small negative point is that we noticed audible “coil whine” during testing, which was not apparent from the Founders Edition.