Sky Q was already great and is even better than when it first launched thanks to regular and important updates. These include a new interface, upgraded touch remote and the addition of Netflix. There’s more 4K content now and although the various packages and add-ons are a little confusing, Sky Q is still the best TV platform you can get.

Sky Q has been around for a while now and thanks to on-going updates and innovation, the TV platform is still the best around. If you’re still on Sky+, it’s time to upgrade. Find out why in our full Sky Q review.

In short, Sky Q is the latest type of set-top box from Sky that offers technical improvements on the existing Sky+ boxes, plus streaming and other home and offline benefits. In fact, with its new user interface, built-in apps and accessories it’s really a whole new premium TV platform rather than just a new shiny box.

Sky knows that people want to watch not just multi-room TV but to share recordings round the house too. Q allows you to pause a programme (live, recording or downloaded box set) in one room, and continue watching it in another – Sky calls it “fluid viewing”.

This term also encompasses synching recordings to your iPad or Android tablet so you can watch your favourite shows wherever you go via the Sky Q app (even offline).

If you haven’t got Sky Q yet, then it’s now available from just £22 per month.That’s less than half the previous price.

Things get pretty complicated depending on what channels, box and extras you want.

It’s cheaper to get the 1TB box with a £20 installation but only the 2TB box (£75 installation) has features like recording more shows at once and the ability to watch Ultra HD content. So it’s not just just the amount of storage you’re choosing – see below for a more detailed comparison.

As is stands, a Sky Q Mini box comes free and you can add more at £99 each if you want. You can connect up to four.

Even then, you’ll need the Q Experience package at £13 per month – this is the name for the package that give you multi-room, pause and carry on, recordings on the app and Ultra HD.

Of course, adding things like Sky Sports and Sky Cinema is extra. The deals change a lot so the standard price for these is £30 and £19 per month respectively. Those wanting the 11 Kids channels and on-demand content can add £5 per month to the total.

Then there’s the Ultimate On Demand add-on which is £12 per month and gets you both Sky and Netflix content on-demand. You’re Netflix bill will be bundled onto your Sky bill which is pretty neat. 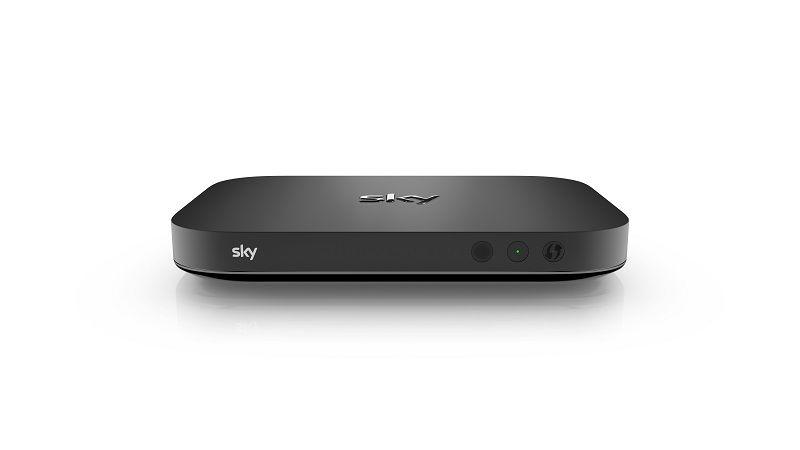 There are two models of main Sky Q box, plus a Mini version for another rooms in your house: the entry-level 1TB Sky Q and the high-end 2TB Sky Q (previously known as Sky Q Silver).

Note that you’ll need Q Experience to get the full Sky Q, er, experience. The Sky Q Mini is essentially a satellite box giving you access to your Sky Q system in other rooms – it doesn’t have its own storage.

And Sky Broadband customers can use the three types of Sky Q box to create fresh new Wi-Fi hotspots around the home. 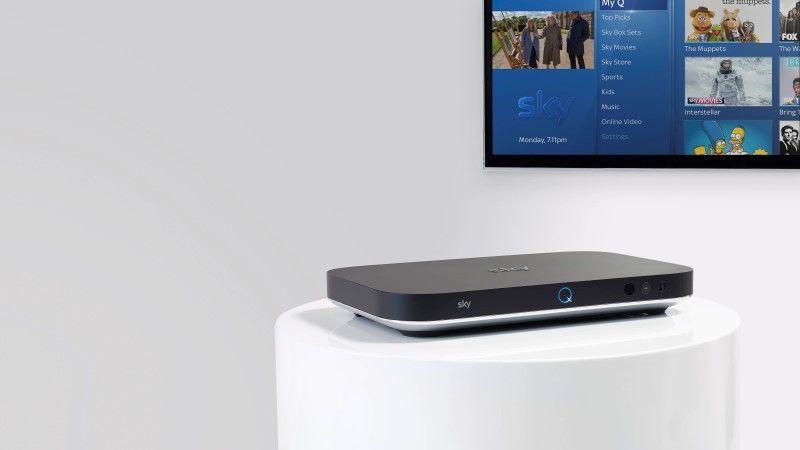 Excitingly Sky Q comes with not one but two types of remote control. One is fairly standard and more compact than the old Sky+ remote. This takes some getting used to (just like the new interface, see below) but is reasonably standard in its push-button operation.

The more innovative Bluetooth Sky Q Touch remote is meant to help you navigate “naturally” via touch controls you swipe and tap, rather than buttons you push. Even our experienced Sky engineer described this as “tricky”, and it certainly requires a lot of practice. We suspect that many will lie gathering dust under the TV or in a drawer rather than becoming the first-choice remote. At home we have a similar second remote with our Samsung Smart TV and we never use it.

That said the Touch remote has some neat tricks. For instance if you’re one of those people who often lose the remote (and who isn’t one of those?) you can press the Q button on the front of the box and the remote will start beeping.

Note: A 2nd-generation Touch remote (below) adds the ability to switch off the touch sensitivity. 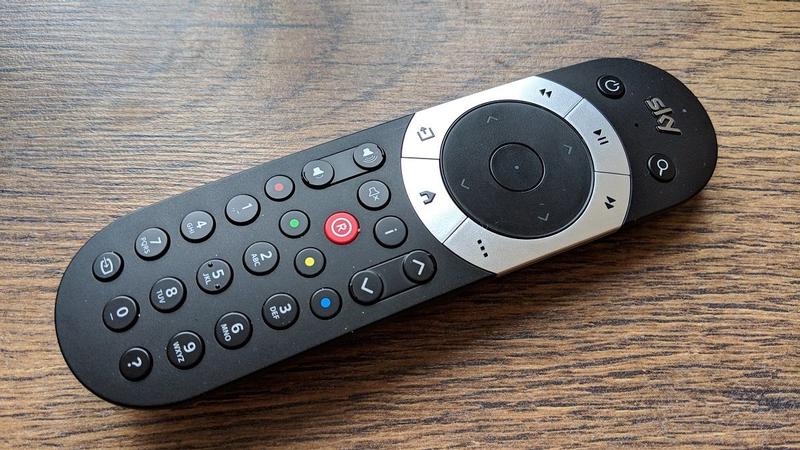 Sky Q comes with a new EPG (Electronic Programme Guide) and user interface. We were confused and bewildered at first but over time, updates have made the interface much better.

For starters, the vertical menu is now over on the far left of the screen, so there’s less dead space and more room on the right to display whatever menu you’re browsing. The menu has also been rearranged so TV Guide is just one click away from My Q rather than being awkwardly a few above it.

Long time Sky+ users will still take some some time getting used to it, but it will be worth it after a couple of weeks. 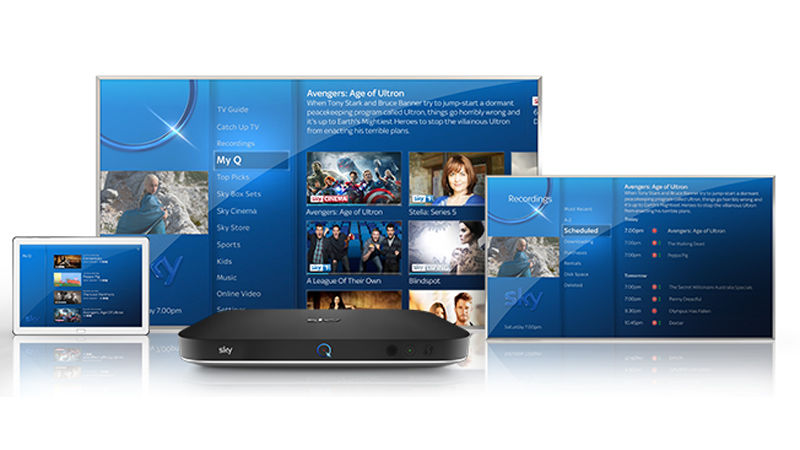 My Q is still at the heart of the interface and shows you all kinds of content including recommendations and shows you’re half way through watching. Favourite channels has been added due to customer demand and when using pause, forward or rewind you can see where in the programme you are, which is a definite improvement on the Sky+.

Content is now shown in ‘rails’, or scrollable rows just like Netflix and if you have Ultimate On Demand then Sky and Netflix content will be displayed side-by-side. There’s no need to open the Netflix app so that’s not something you can get elsewhere.

The search facility can also be used to search both Sky and Netflix content which is pretty useful. 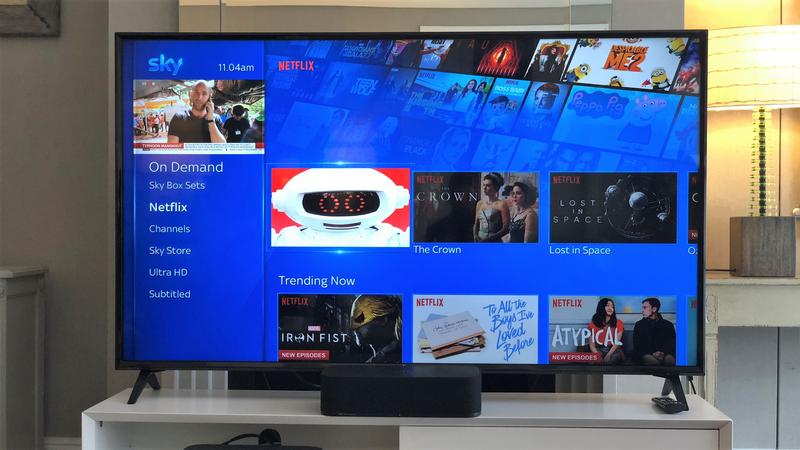 Bear with the changes and you will be rewarded. You can search for your recordings alphabetically, for instance, rather than slogging through chronologically – one reason why you might have so many unwatched shows on your box. Thumbnails also make it a lot easier to find things as opposed to the old list format.

There’s no guide button on the remote, which is a shame, but you’ll soon get used to the way Sky Q works with the home button. Sky says that Q “was designed as a completely new way to watch TV” and is focussed more on recordings and on-demand content.

It’s worth noting that you can’t simply stream all on-demand content, instead it must be downloaded to the box first (you don’t have to wait for the download to finish before watching though. This seems a little odd as although you can then keep the content (even if it gets removed from the library), it takes up space on the box. Sky said that the box will automatically delete things if the hard drive is full based on things that have been watched and the oldest content. You can mark items to ‘keep’ to make sure things you love don’t suddenly disappear.

We previously found the lack of a ‘download series’ option annoying but Sky Q will now at least download the next episode of a show you’re watching (if it’s available) so that it’s ready to watch as soon as the credits roll. This is great, it just makes it harder to resist binge watching.

There are more handy features, with some a bit more hidden such as Sports Split Screen that lets you watch two streams or video highlights side-by-side at the same time. It’s only available with certain events though.

Sky Q brings smart TV features straight to the box, including a bunch of apps such as Sky Sports News HQ, Sky News, Music, My Photos, Weather and Help. As you’ll have gathered, Netflix is now on Sky Q, as well as Spotify.

My Photos app lets you share your favourite photos on your big-screen TV. Music uses video-streaming site Vevo to bring your favourite artists and new music videos and live performances to your TV. You can also play your tunes through Sky Q via Apple AirPlay or Bluetooth.

You can tell Sky Q the name of your favourite football team, and it will keep you up to date with latest scores and signings, for example. There’s also a goal-alert function if you want it. 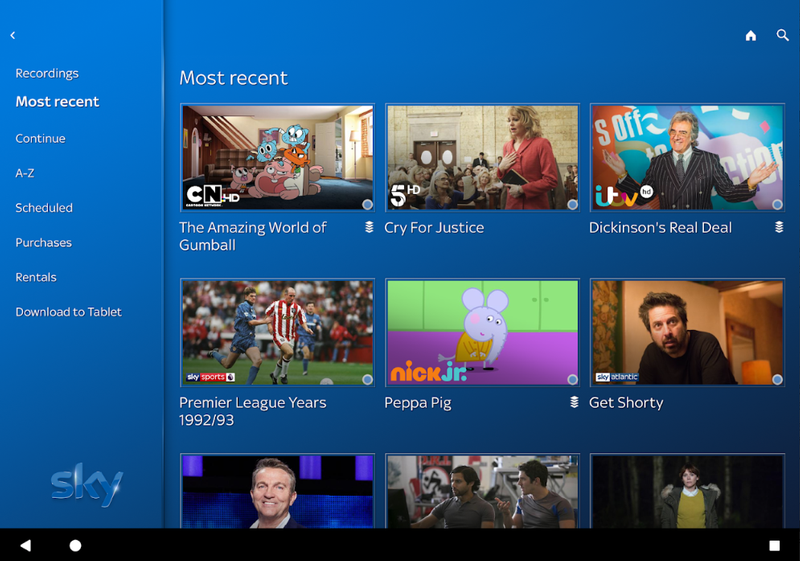 You’ll need the Sky Q app itself (available on iOS and Android) to download your recordings onto a mobile device for offline viewing. The app works well and thanks to an update can now be used to set recordings on the box. This was a a vital missing feature initially.

The amount of 4K content is always growing so it’s about time you upgraded your TV if you haven’t already. Sky’s official figures state there is 3000 hours of Ultra HD content available across movies, sport and entertainment. There’s a further 2000 hours on-demand on Sky Box Sets and Netflix. 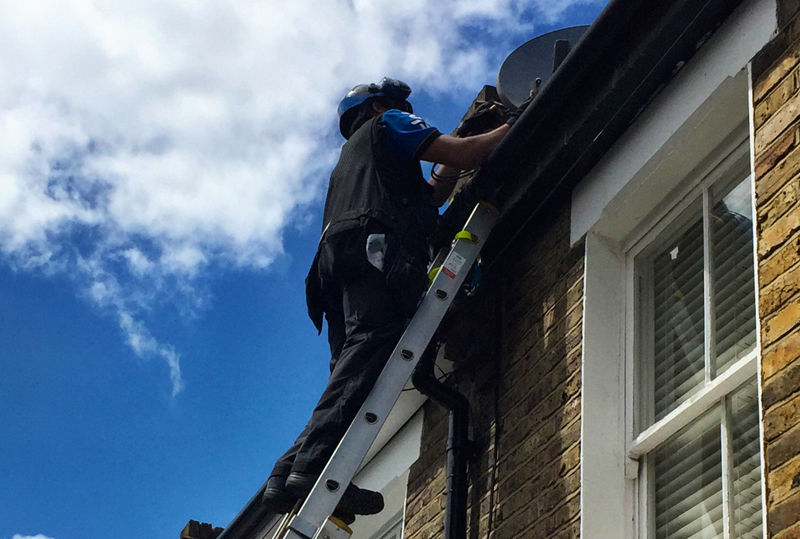 Our Sky Q engineer was excellent. He replaced our older dish on our roof – they might just need to swap the LNB (Low Noise Block Downconverter) of your current dish.

He did all the setup with us in our front room, and the second room for the Sky Q Mini – including pairing the two remote controls with the TV. This used to be a hassle but Sky Q is so clever it seems to know everything about your TV set up.

The installer then talks you through the new hardware and interface. As mentioned earlier you’ll still be cursing the changes for a few weeks afterwards as old habits die hard. Some of the new stuff makes sense. Other parts seem ridiculous to change. For example, why so many clicks to the TV Guide? What happened to Favourite channels?

Warning: you will lose all your saved recordings when you switch to Sky Q as it’s a physically new box. One piece of advice we’d give is to make a note of your scheduled recordings. In other ways, losing all those hours of recordings is quite cathartic as you just know you would have never got round to watching them anyway.

We already thought Sky Q was brilliant when it launched, despite a few little quibbles here and there.

Luckily Sky has listened to feedback of both reviews like ours, and its customers to make various improvements. Most notable updates include the new interface, addition of Netflix (including billing) and using the app to set recordings.

Sky Q is still expensive if you want lots of package add-ons, and the choice is a bit confusing, but it’s still the best TV platform you can get.